6 Features of Victorian Kitchens That Are Uncommon Today

The kitchen has come a long way since the Victorian era. Cooks in the 1800s could never have even dreamed of all the gadgets and conveniences we have today. Back then kitchens were arranged quite differently to how we know them nowadays. Have a look back with us at 6 features and functions of Victorian kitchens you certainly won’t find in modern homes. 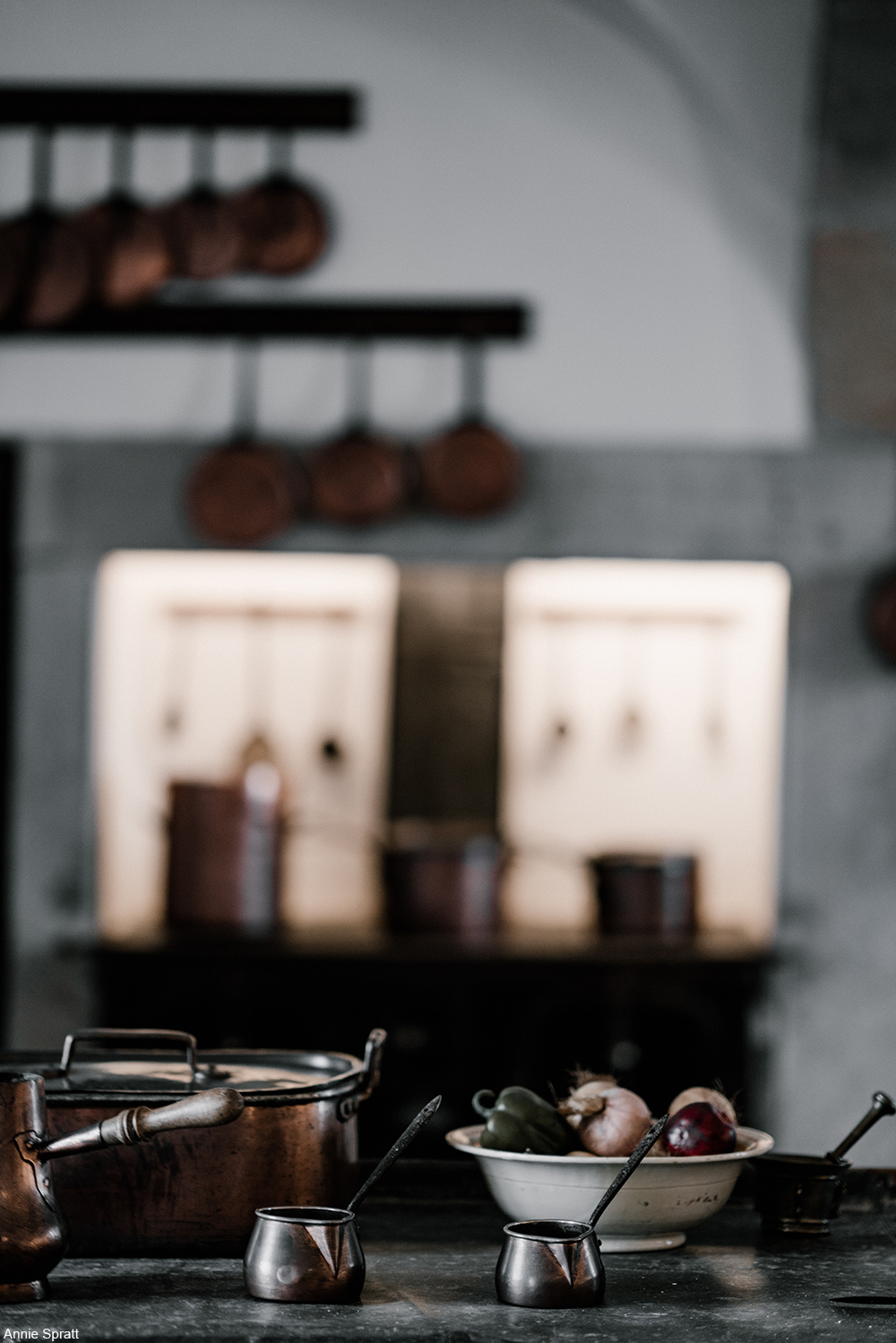 In the days before built-in countertops and cabinets, the kitchen was often furnished with whatever a family had on hand. These could be dressers, china cabinets, and/or rustic cupboards. This meant that a kitchen could look very different in different homes. Many families would have had root cellars or other cold storage and so much of the food storage didn’t happen in the kitchen. 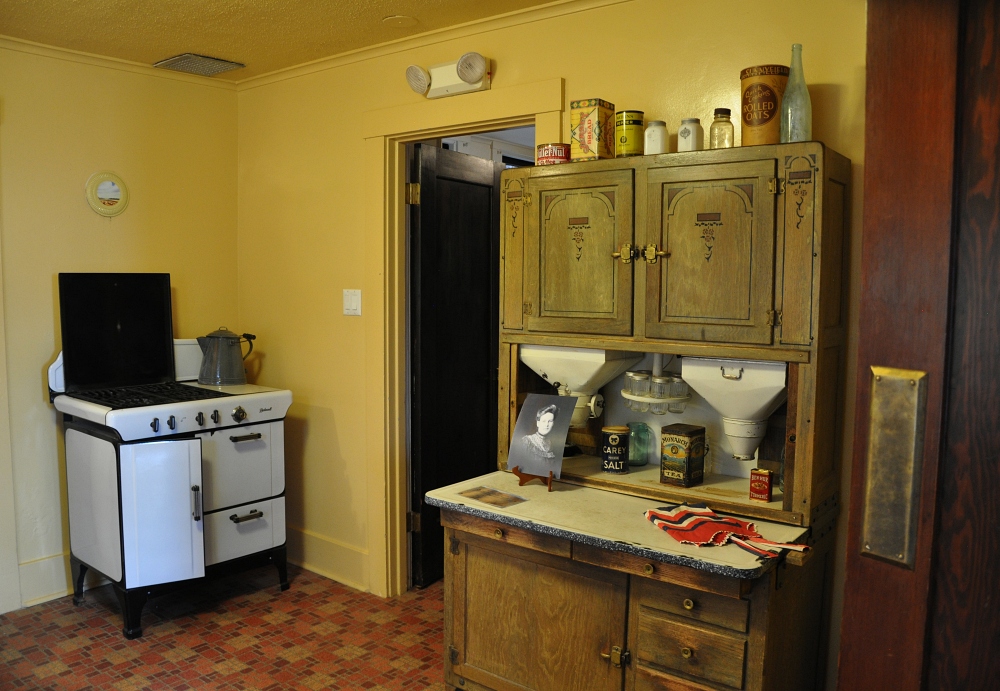 Dry storage, like pie safes and corner cabinets was needed- although poorer families might not have had these luxuries- instead covering food or supplies with cloth or wooden covers. Hoosier cabinets and baker’s cabinets became very popular starting in the late 1800s because they combined dry storage with a work surface and could fit in nearly any home.

Not having any built-ins, the main work surface in a Victorian kitchen would have been a tabletop in the center of the room. In working class households, this was where the family ate as well, but in upper crust houses there would have been separate dining areas, one for the family and another for their servants. 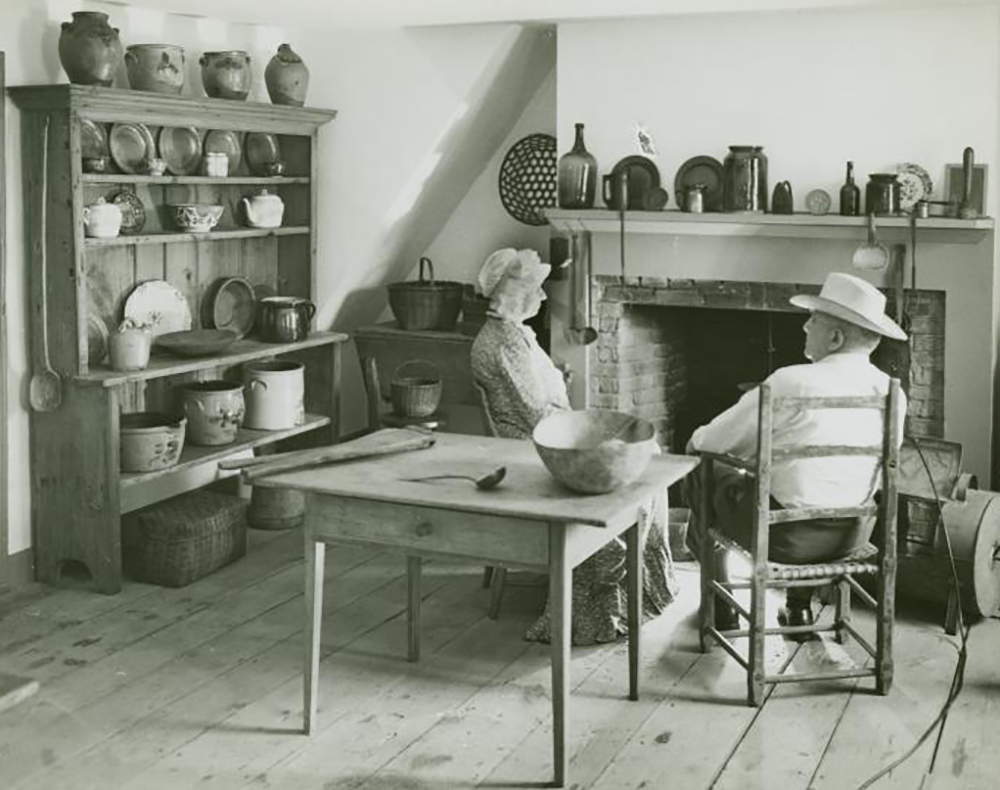 This meant that most kitchens in the Victoria era were centered around a table in the middle of the room and hence usually faced inward- unlike today’s kitchens where all the countertops, appliances, cupboards, and storage are usually placed against the wall in an outward facing configuration. In rooms that were small this design might have been forgone by placing the table against the wall, but it was not the fashion of the era to do so.

It wasn’t until the end of the 19th century in nicer homes that indoor plumbing was first integrated into homes. Sometimes kitchens were even the last to get this feature, bathrooms being the main source of hygiene and novelty when it came to indoor plumbing. 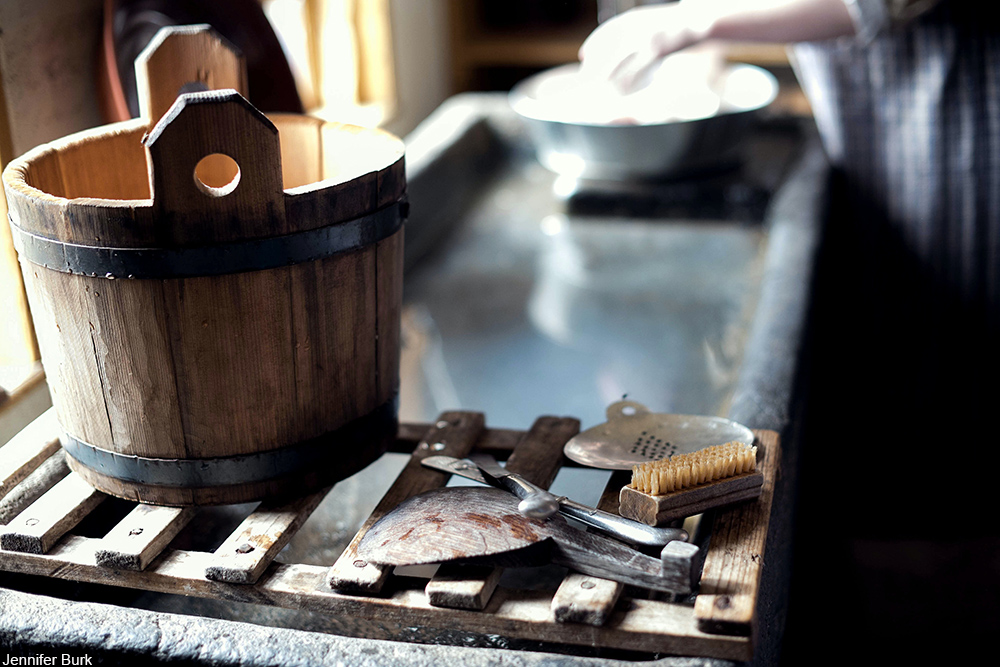 In some larger homes there would have been a dry kitchen and a wet kitchen- two separate rooms where different activities were managed.

Established families living in older homes (or those who chose to build in the older style) would have used a hearth to cook over. This involved a roasting rack, spit, and cast iron cookware that can be hung over the fire (for stews) or surrounded with hot coals (for baking). Towards the end of the Victorian era cookstoves gained popularity, sold as a more hygenic, modern, and attractive way to cook. These could be coal, wood, or gas fired and ranged in size from little potbelly stoves to massive units with built-in storage. 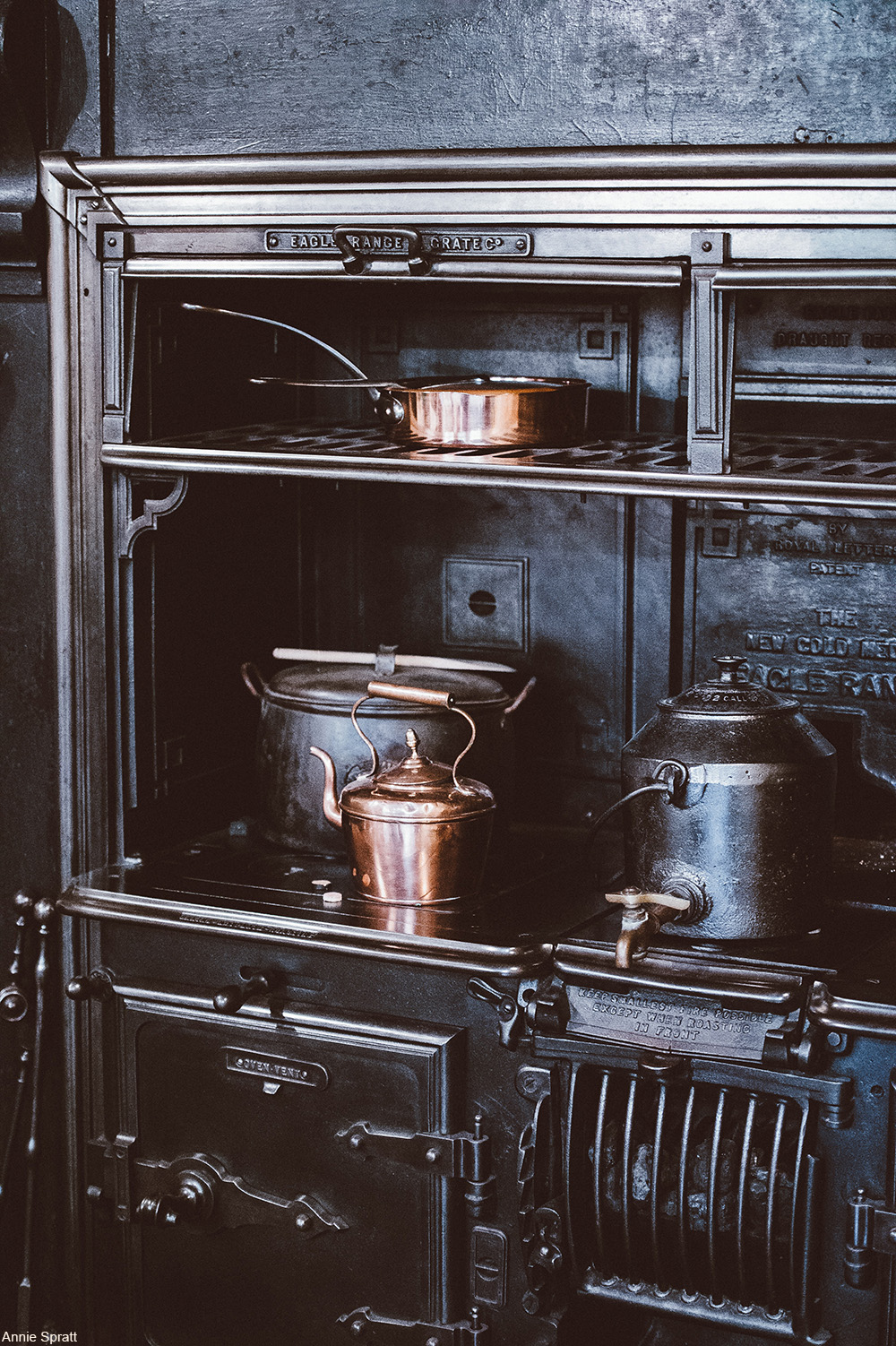 Some stove units would have also had a tank on the side for on-demand hot water in the pre-plumbing kitchen (and this style is still made today). The water was carried into the house and heated manually of course. To these stoves blacking would have to be regularly applied, something that enameled stoves forever eliminated in the 1910s and 1920s.

Victorian cooks would have likely swooned over our stand mixers that whip, knead, and mix anything we throw at them. They didn’t have inventions like these, but that doesn’t mean they didn’t have their own vast selections of kitchen gadgets. 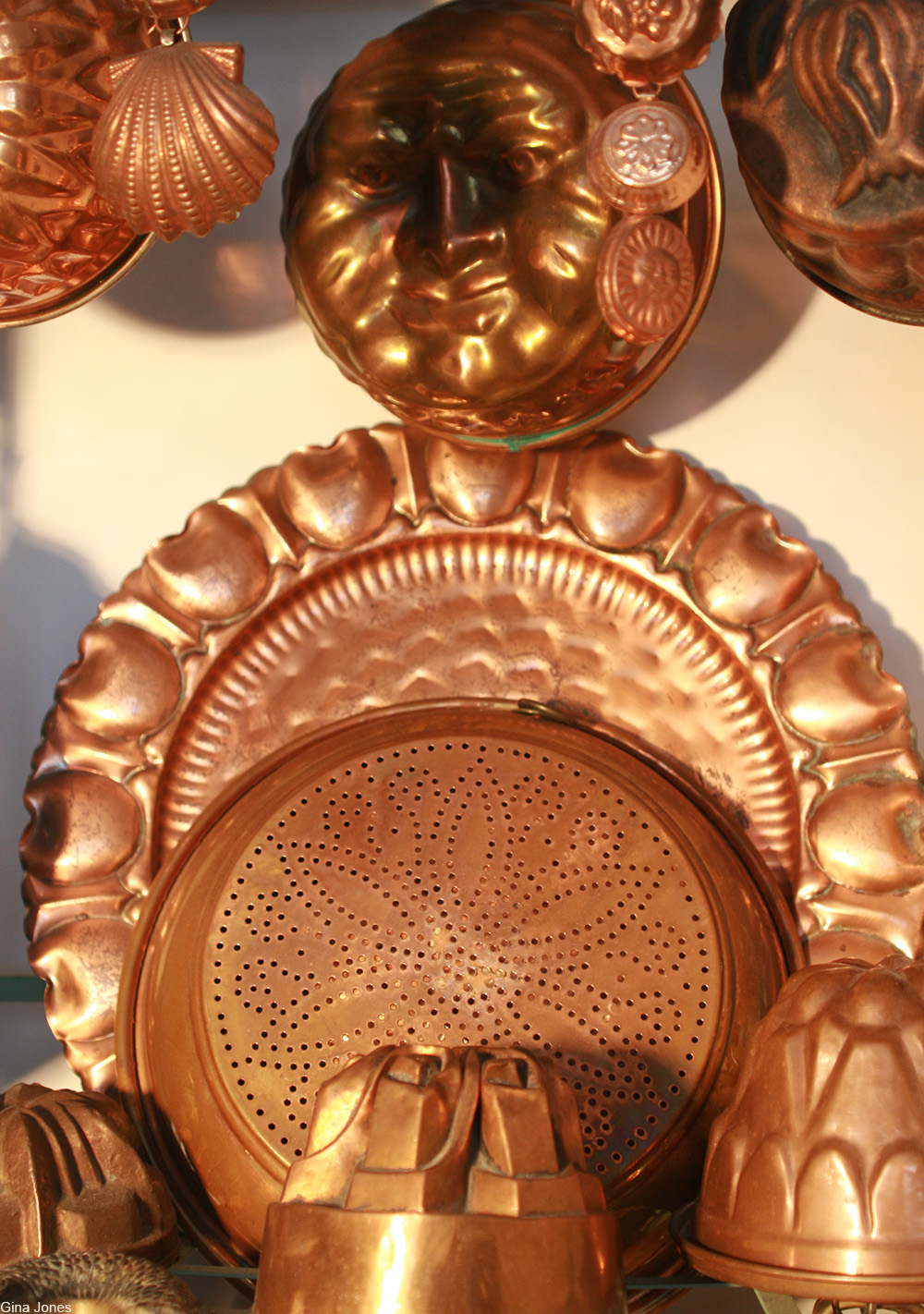 In the 1800s books like Mrs. Beaton’s Book of Household Management (1861) brought some rather upper crust notions to the average cook. Recipes for jellied delights, mousses, and other molded foods meant that many people aspired to have a range of molds and devices with which to make extraordinary dishes. Cooks back then would have also had a number of pitting, chopping, and peeling tools since they had to process all their foods by hand and needed special tools for each task.

Kitchens of the Victorian era were not only places to cook, they are where medicines and other potions were made, and if there was no separate laundry it would have also been where dyeing, mending, washing, or fittings might have happened as well. If stitches or some other urgent surgery were needed, it was often done in the kitchen. 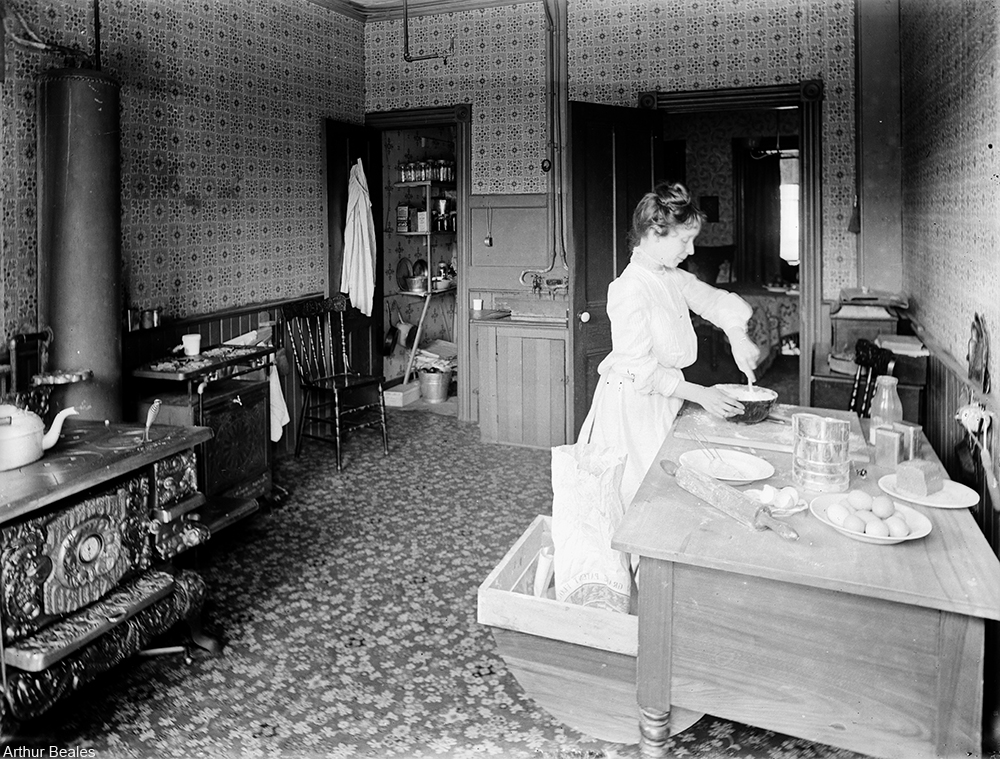 It was also where candles were made and any number of other products and household chores took place. It was the heart of the home, but not merely because of the food being made there.