When An Intern Discovered This Treasure In The Attic, She Saved The Museum!

In 2013, Emilie Gruchow was cataloging and reorganizing the 17th and 18th-century manuscripts stored in the attic of the Morris-Jumel Mansion private museum where she worked, when she came across something that caught her eye. Gruchow, an intern at the time, recognized the line “by these and by every other appellation,” on a specific manuscript. That line turned out to be a part of  a draft of “The Twelve United Colonies, by their Delegates in Congress, to the Inhabitants of Great Britain,” a document created by congress urging the citizens of Great Britain to consider reconciliation. 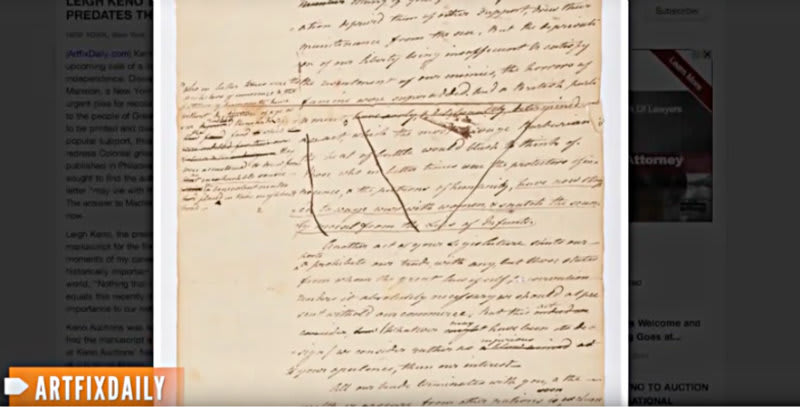 The document is more than 250-years-old, and shows how torn the colonists felt about going to war (dating back to 1775, just a year before the colonies declared independence, the manuscript shows Congress was trying to avoid conflict with Great Britain). While the draft was unsigned, experts knew that Robert R. Livingston, Richard Henry Lee, and Edmund Pendleton were tasked with writing the manuscript (which was dubbed The Livingston manuscript). Based on the hand-writing, scholars have confirmed that the draft was written by Livingston, who also was one of the five men assigned to write the Declaration of Independence.

Prior to the discovery, there were no known versions of this document other than the finalized, published version from 1775. Knowing that this was a significant find, Gruchow brought the manuscript to the museum’s curator. After careful examination, the document was authenticated, and appraised for an estimated value of $100,000 to $400,000. At the time, the museum had been struggling financially, and was in desperate need of an exterior renovation. So you can imagine how thrilled the employees and patrons were when the manuscript eventually sold for $912,500 at an auction! The buyer, a private collector named Brian Hendelson, even allowed the New-York Historical Society to display the document for the public to see.

It’s great that such an important discovery not only gives us a rare glimpse into what was going through the minds of the Continental Congress during such a pivotal time, but that it also allowed this historic museum to remain functioning for the foreseeable future! You can read more about this historic find in the following article from Smithsonian.com, and get a closer look at it in the clip below.