One of the most well-known images from the World War II era, the yellow-backed Rosie the Riveter poster has been beloved by young and old for generations. But, the emblematic and moving image has a storied past which we seldom hear. The poster has now come to symbolize the war effort on the home front and the first foray into work outside the home for many American women. The familiar red and yellow Rosie the Riveter image was so appealing that its themes have been copied for countless advertisements and posters. Find out more about the “We can do it!” poster below. 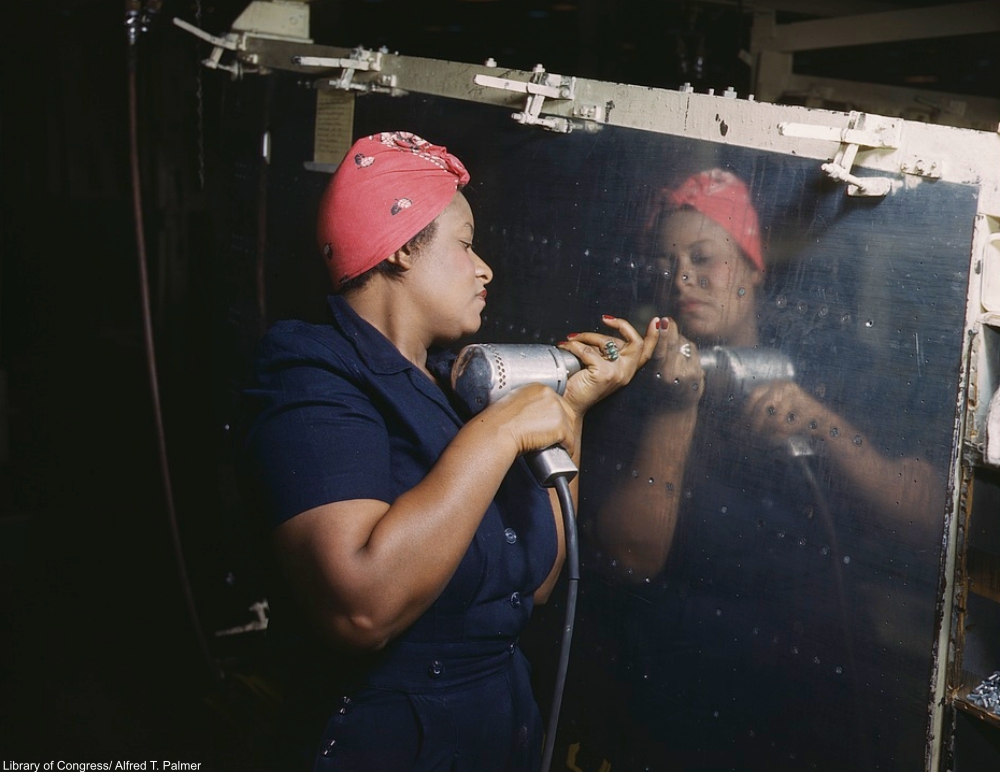 From original 1943 caption: “Operating a hand drill at Vultee-Nashville, woman is working on a ‘Vengeance’ dive bomber, Tennessee.” Via/ Library of Congress

The iconic poster was the creation of J. Howard Miller, commissioned in 1943 for Westinghouse and the War Production Board to boost morale within the Westinghouse factories that produced steel, glass, and supplies for the military during the war. The motivational poster wasn’t actually seen by many people at the time as it only hung in factories for a few weeks. The poster was brought back to light in the ’80s, particularly after the 1980 documentary The Life and Times of Rosie the Riveter. 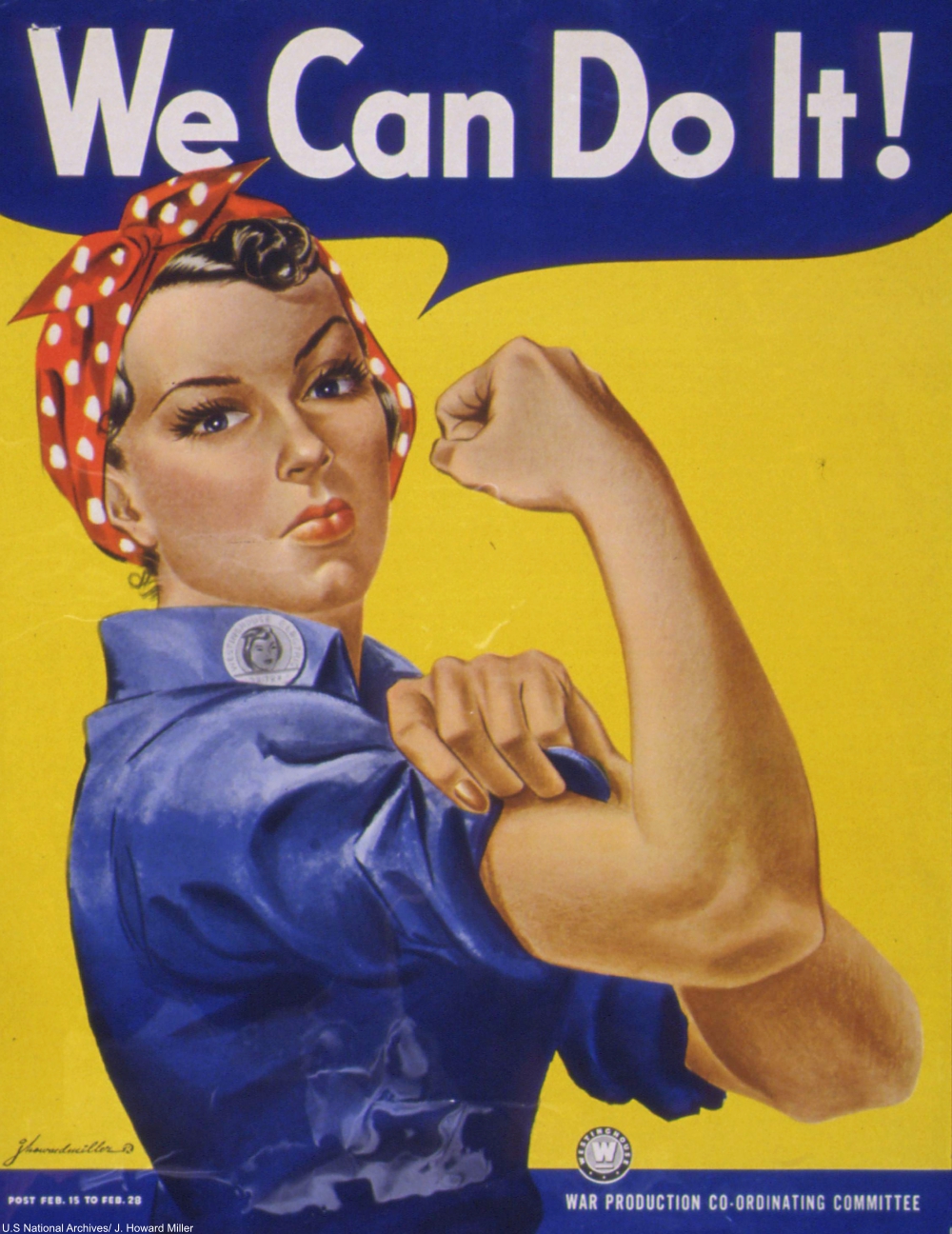 The woman in the poster was a likeness of Geraldine Hoff Doyle or Naomi Parker-Fraley depending on who you ask. But, the nickname was inspired by three female workers all named named Rosie who each received publicity about their wartime jobs. Rose Will Monroe, Rosalind P. Walter, and Rose Bonavita all worked in wartime factories and their public personas made a cache of the name Rosie, though not all of them were riveters.
The phrase “Rosie the Riveter” also inspired the term “Wendy Welder,” which never gained quite as much popularity with the public. 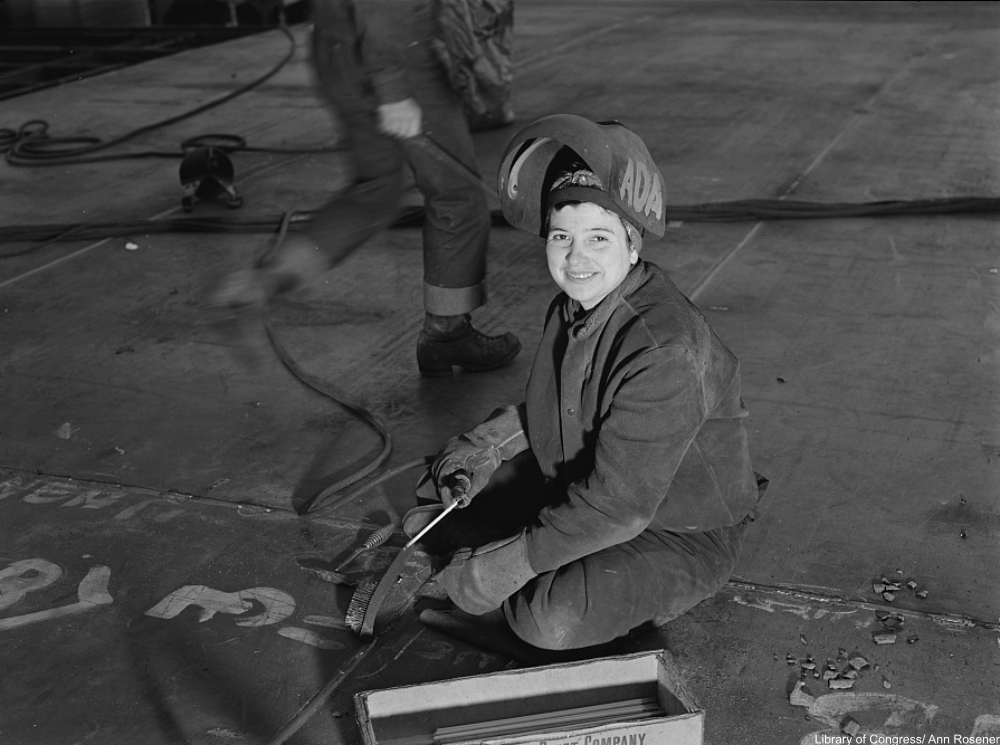 From original 1943 caption: “California shipyard workers. This woman worker pushes back her helmet during a moment’s pause from her welding job at the Richmond shipyard in California.” Via/ Library of Congress

We know the image as Rosie the Riveter today, but if you’re like us you’ve always wondered why she is assumed to be a riveter when there’s no machinery in the image. The muddling of facts happened partially because the image was popularized long after the events of the war were over.

The term Rosie the Riveter was more aptly applied to a Norman Rockwell piece which depicted a buff, scruffy woman taking a break from her riveting job, rivet gun in her lap, and eating a precariously balanced sandwich. The name Rosie is written on her metal lunchbox.

The magazine covers and ads and recruitment posters were in addition to a tireless door-to-door campaign to get women into the factories where labor was so sorely needed. And, Miller’s poster, as wonderful as it is, was never really a part of that. Rockwell’s Rosie, however, certainly was and as part of a collection, even toured the country to raise money for war bonds. 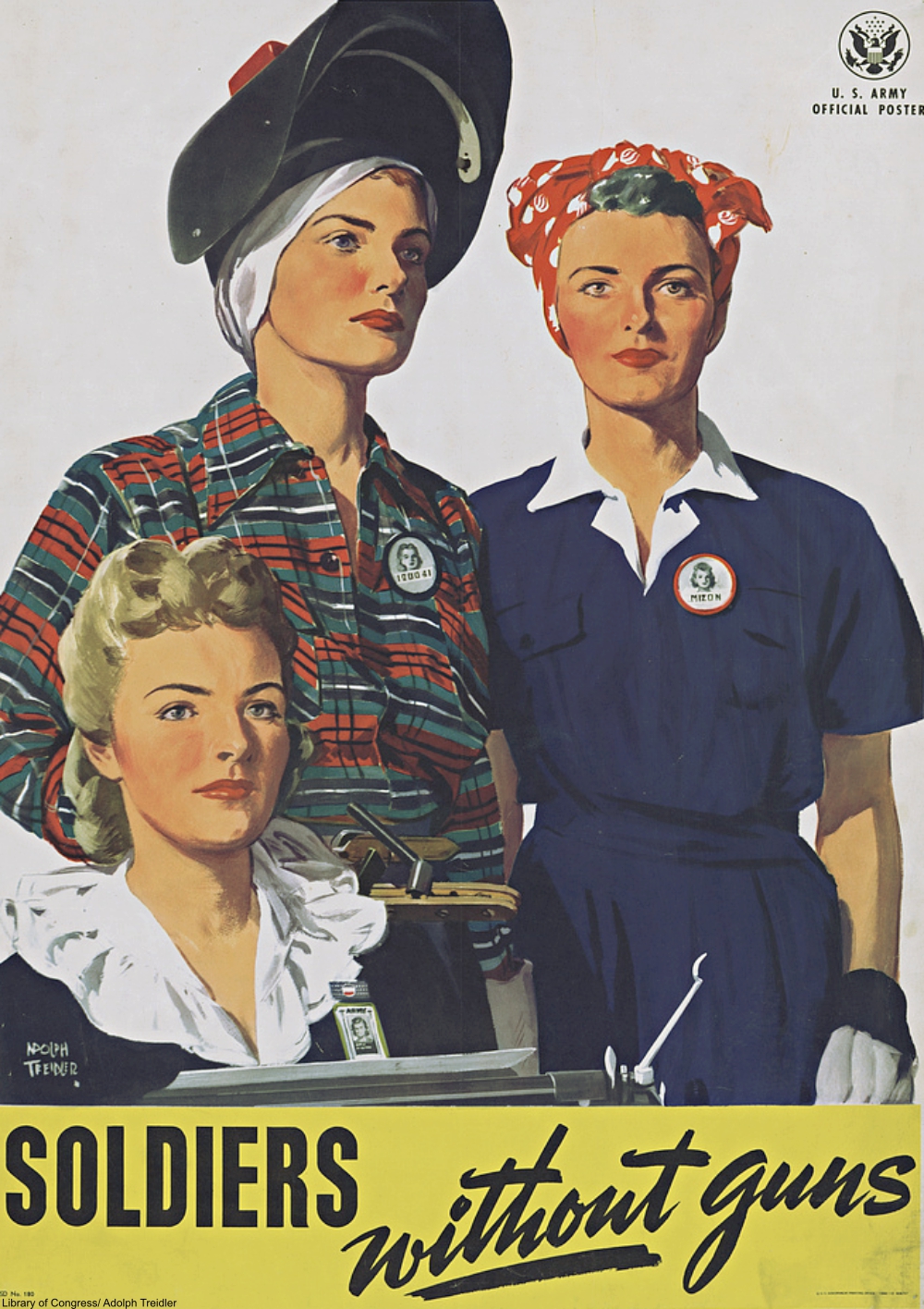 W.O.W. recruiting poster from 1944. Via/ Library of Congress

Incidentally, the polka dot bandana is a reference to the cannon ball motif bandanas issued to the Women Ordinance Workers during the ’40s. The W.O.W. pattern isn’t exactly polka dots, but Miller’s creative license made the image more relatable as not all female workers were in the W.O.W.

However, it’s also possible that if Miller based his poster on a photo of Naomi Parker-Fraley her polka dot bandana was truly the inspiration. Either way, the polka dot bandana (or something like it) came to symbolize the factory women of the war effort. 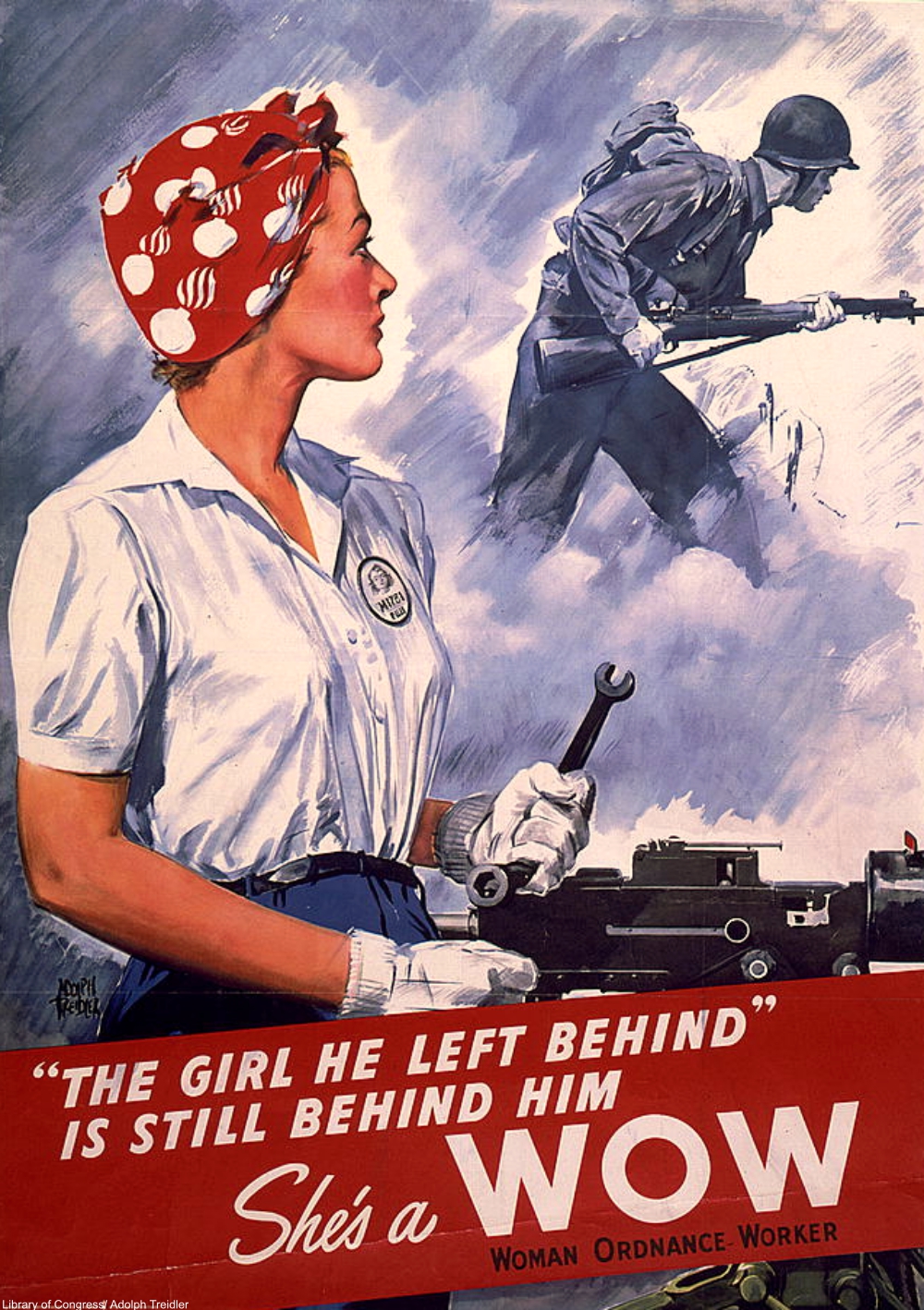 The cannonball print bandana pattern of the W.O.W. is shown clearly in this image. Via/ Library of Congress

The real Rosies played such an important part in the war that their importance cannot be overstated. The poster that had little audience when it was first printed has now become the seminal image of women’s roles in the war effort.