One of The Largest Civil Disturbances in American History: The Draft Riots of 1863

The draft riots of 1863 are an often-overlooked bit of Civil War history. During the four days of fire, murder, and destruction, the working class men of New York City took to the streets in defiance of a new draft order which mandated that they fight in the Union army. During this ordeal, there were 119 published deaths, but many more were suspected to have occurred. The angered working class draftees of New York City engaged in a four-day bloodbath in which $1,500,000 of damage was done by mobs hell-bent on getting what they saw as justice for the impending loss of life and livelihood. 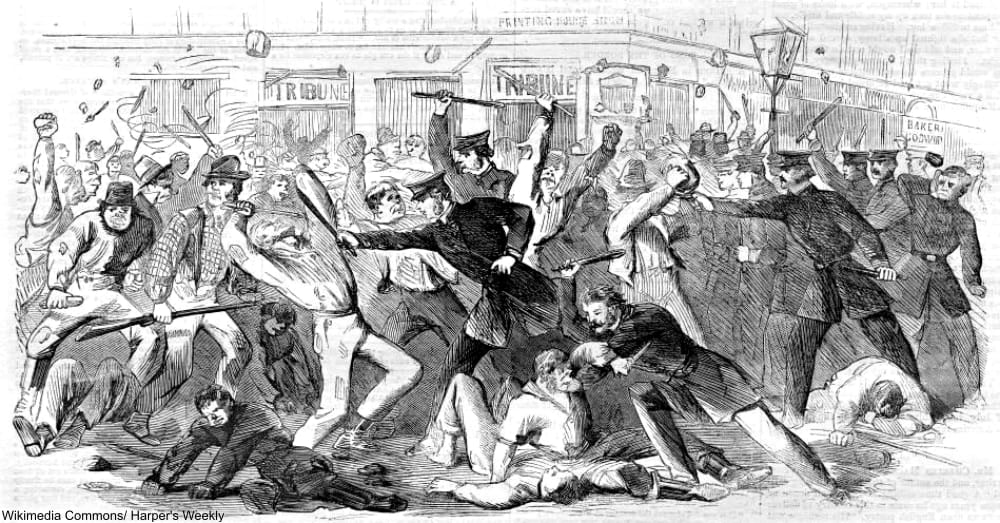 The “wheel of misfortune” as it became known was how officials picked the names for the draft: literally a drum full of potential soldiers’ names. During this time the Civil War had increasingly been referred to by some as the “rich man’s war, poor man’s battle,” because the rich appeared to be fighting for their money, using the lives of the poor and working class as cannon fodder.

At the time, rich men could pay to opt out of the draft, leaving poor men to go into war in their stead (for a $300 commutation fee). Consequently, working-class men whose names had been drawn were beyond angry. On July 13, the second day of name-drawing, all havoc broke loose when the provost marshall’s office was attacked by a mob of 500 angry anti-draft rioters equipped with stones. The mob set fire to the building and sent the draft officials fleeing. 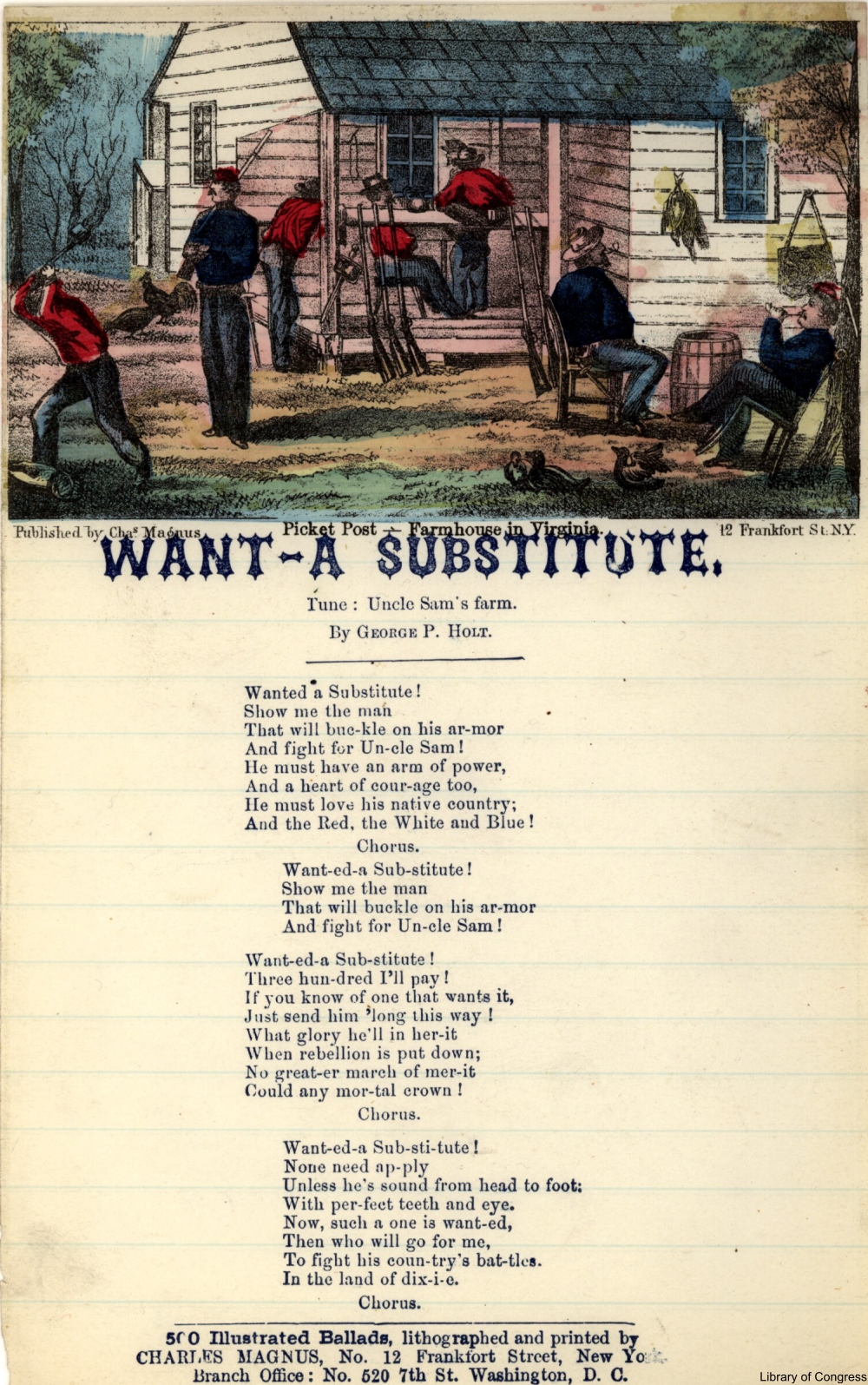 This song sheet tells of a rich man looking for a perfect patriotic specimen to go to war in his place. Via / Library of Congress

The following message was sent by telegram to President Lincoln on the evening of July 13, 1863: “Our City, having given her Militia at your call is at the mercy of a mob which assembled this morning to resist the Draft & are now spreading fire & outrage — Several buildings in different wards are in flames & the “Times” and “Tribune” offices are at this moment threatened. We look to you for instant help in troops & an Officer to command them & declare martial law.”

The Union-sympathizing newspapers were seen as easy targets. But, as rioters approached the Times office, they were greeted by employees armed with gatling guns who were not about to go down without a fight.

As rioters spread mayhem across the city, their attention turned not only to officials and the wealthy, but also to black business-owners. Even a white-run black orphanage was burned to the ground, though reportedly all but one child were taken to the police station before the building was set ablaze. The one little girl who remained was killed.

The basis for this hatred towards free blacks had been brewing for some time. Up to 40% of shipped goods in the New York harbor at the time were cotton from the South and slavery was considered good business by several New Yorkers. Many feared that if slavery were abolished, the nation’s economy would collapse.

The Panic of 1857 only helped to fan the flames of insecurity over the country’s changing economic policies. The stage had been set for mass hysteria by the hardship in the previous decade. Rioters saw themselves as preventing potential job loss to free black workers, since the mostly-Irish poor among them were already jockeying for the the scarce and low-paying jobs in the city.

The riot went on for a total of four days, during which time countless black homes were destroyed, a black man was lynched, and both the wealthy and the poorest among the victims had their homes and businesses looted. Troops were eventually called in on Wednesday, July, 15, clashing with the rioters until the next evening. 6,000 soldiers were sent to New York City to control the crowds and by Friday of that week the situation had begun to turn back to normal.

In what has been called the bloodiest riot in American history, the scope of destruction was massive. The number of deaths has been thought to have been widely underreported in light of the far-reaching damages and senseless violence committed that day.

Click here to read about the incredible Poison Squad!