How Much Food Were People Actually Rationed During World War II?

During World War II most of the world was facing severe hardships. Everything from food to clothing to furniture was metered out in the most efficient ways possible. While all at-war nations had some kind of rationing system, there were very stark differences between countries in how food was rationed and which foods were available, even between nations working closely together like the U.S. and Britain. So, how much food were folks actually allowed?

Having engaged in war with Germany beginning in 1939, Britain was under more strain than the U.S. and for longer. In Britain the first foods to be rationed were bacon, butter and sugar beginning in 1940. 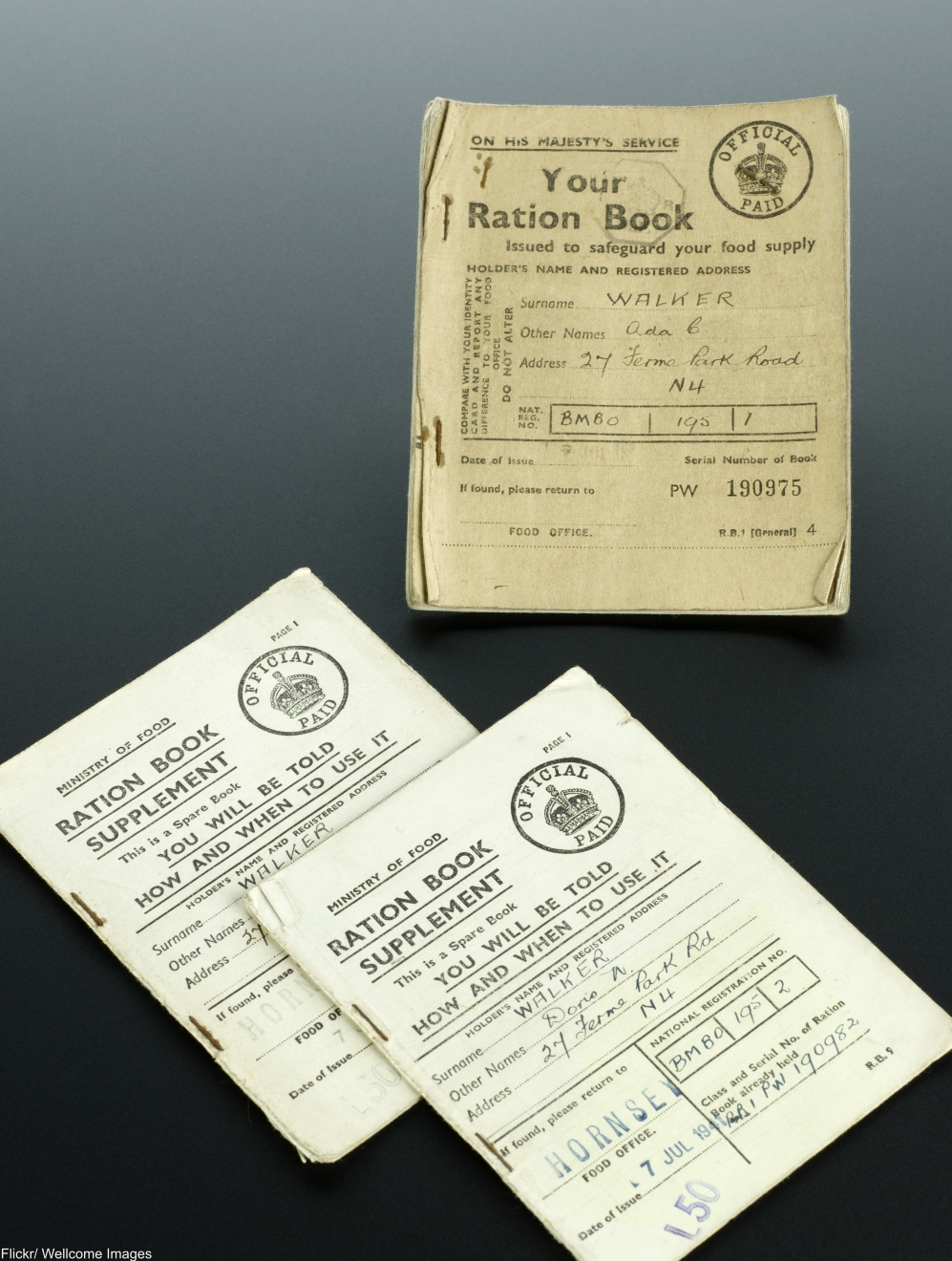 In Britain there were fewer grocery items like rice, or canned fruits and vegetables available through rationing because their supply was far more disrupted by the Germans. Each person in the U.K. was allotted portions of butter, lard, cheese, tea, meat, and sugar per week, but other items often had to be “saved up” for.

One of the reasons that the diet was more plain was due to scientific research done by dietitians Dr. Elsie Widdowson and R.A. McCance at the start of rationing which showed that a simple diet of mainly potatoes, wholemeal bread, and cabbage would be enough to sustain even hard work during this time. 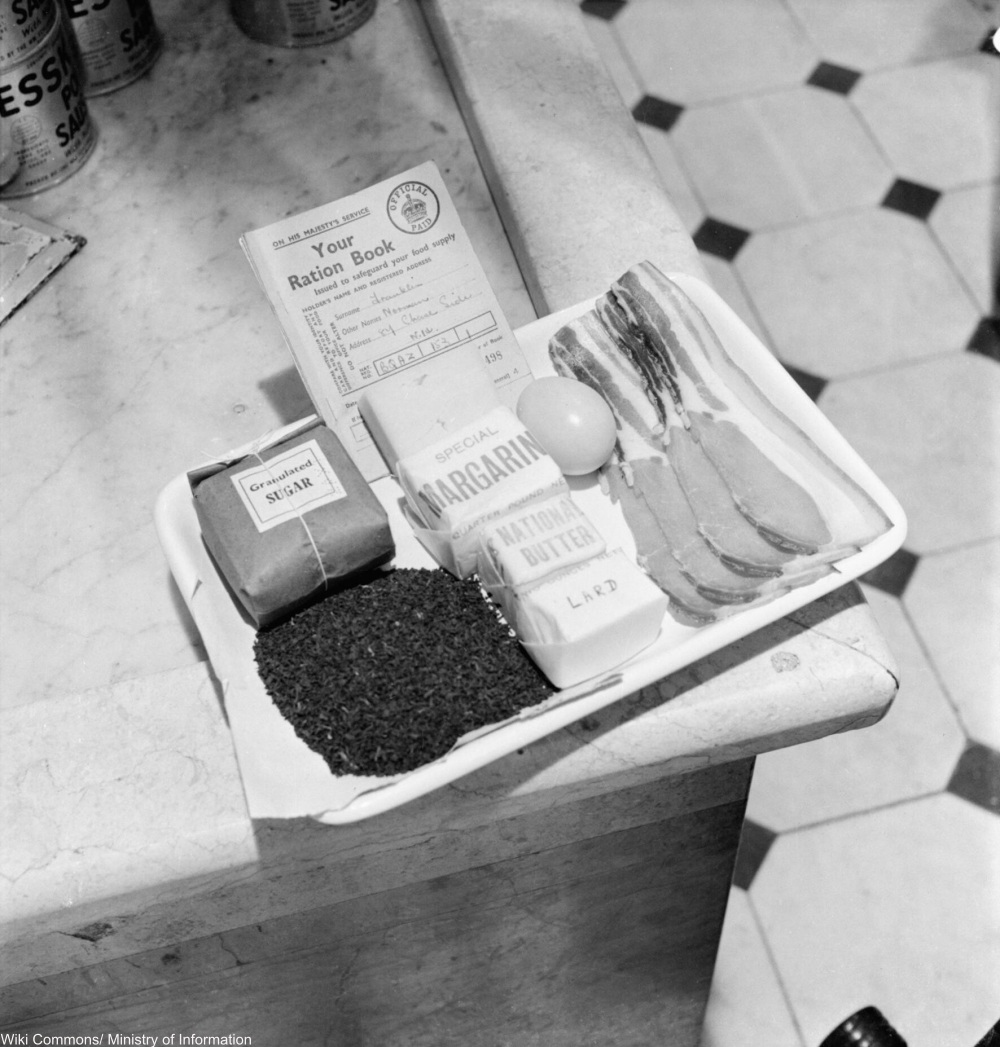 This is the basic allotment of food for a whole week for one adult in England in 1942. It doesn’t look like much to eat! Via/ Wiki Commons

Since only one egg was allowed per adult then to make a cake you’d have to save up a whole week’s worth of eggs. The same goes for sugar. Something as common to us today as a birthday cake would have been an extremely special treat.

In addition there was brown bread freely available, but it was made with whole wheat and extra salt in order to make it more efficient to produce. There was no ration on the “national loaf” as it became known, but at the time it was introduced by the Ministry of Food, the loaves were only allowed to be sold in certain sizes and only at least one day after they were baked. All this meant that the British public only tasted stale whole wheat bread from 1942 to 1950, with few exceptions. Sliced, white bread was illegal during this time.

Victory gardens were encouraged on both sides of the pond, but if you were British homegrown might have been the only vegetables you’d have access to. 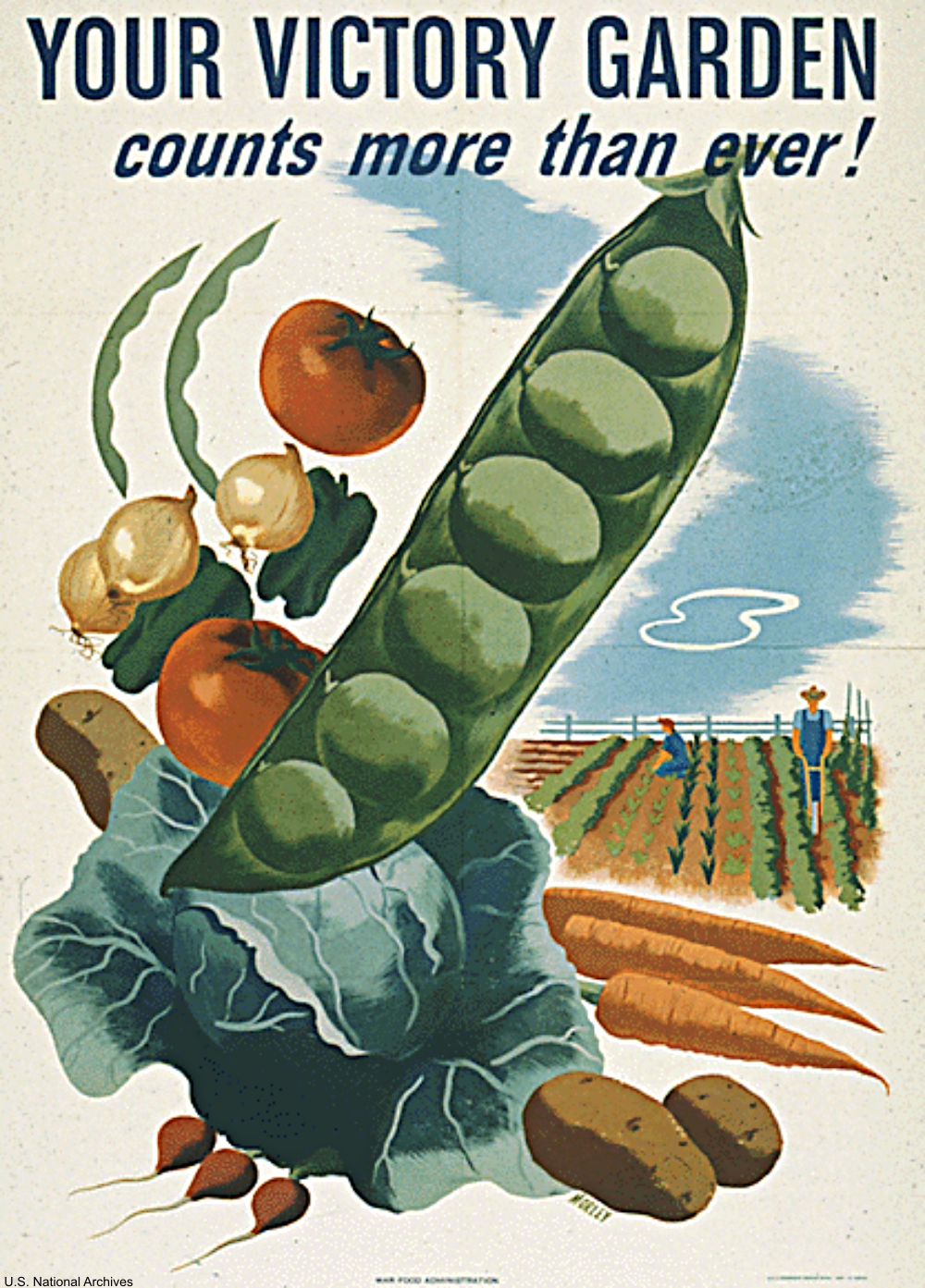 Rationing continued in the U.K. for many years, as it did in many countries after the end of World War II. War-torn cities across Europe and Asia struggled to supply their residents with food and infrastructure and agriculture had to be completely rebuilt in some places. In England some sweets were still rationed by 1950, sugar was rationed until 1953, and bacon was rationed until 1954!

American rationing began in early 1942, shortly after Pearl Harbor and the newly-created Office of Price Administration oversaw price freezes and rationing. The first ration books for food became known as the “sugar book” since it contained the basics. As more restrictions were added, additional books were printed. 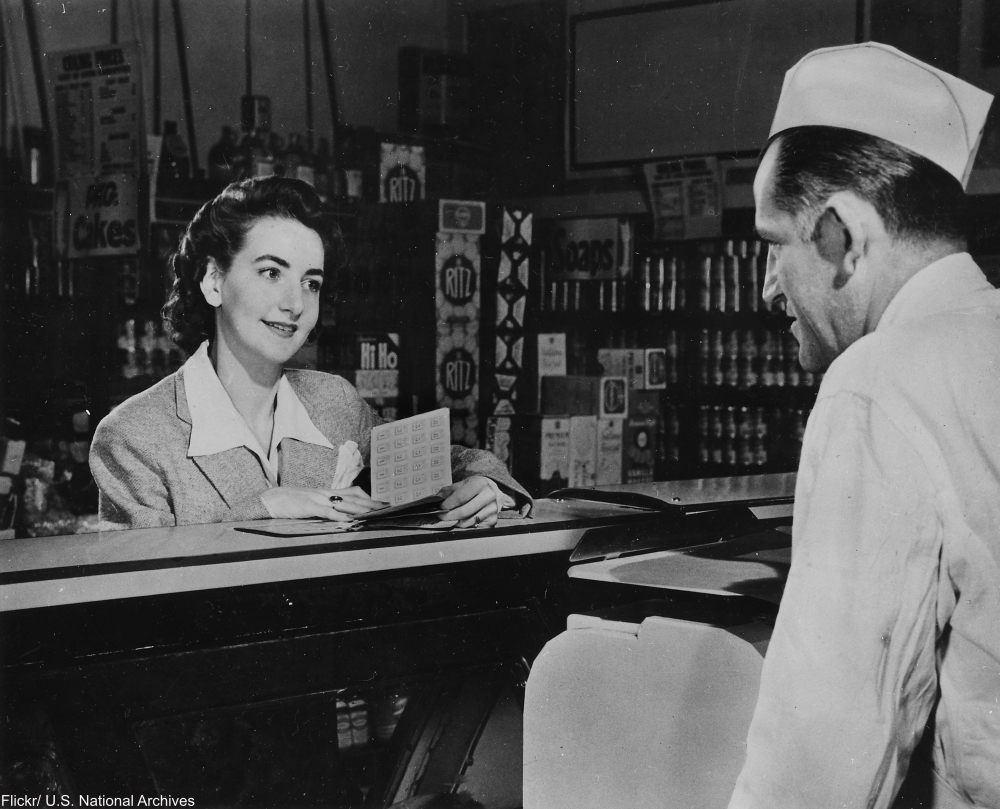 In the U.S. rations were more flexible, included a variety of canned goods, and were governed by a more complicated points system. The first items to be rationed were tires, cars, and typewriters. Sugar, coffee, meats, cheeses, and fats were next. 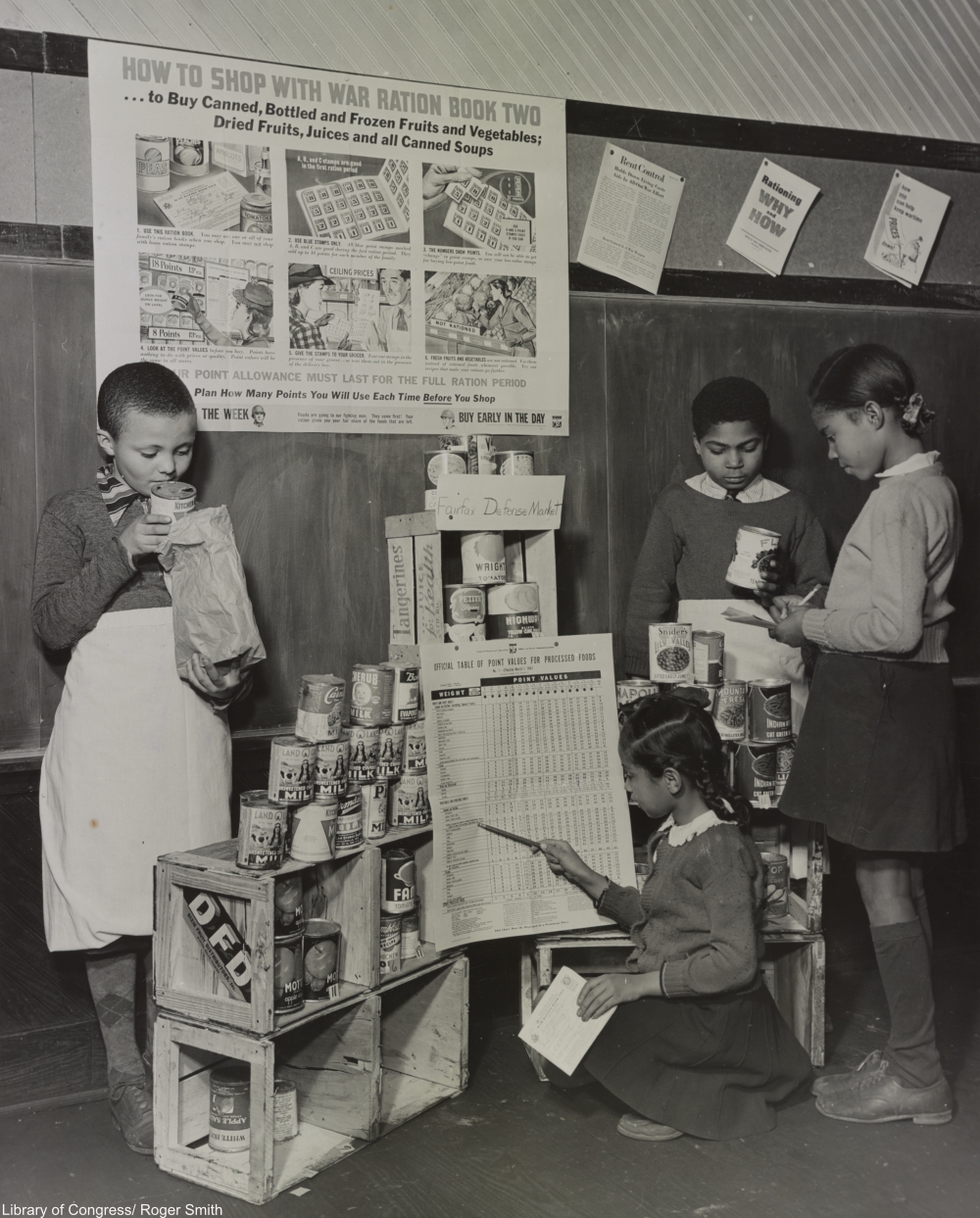 American schoolchildren learn about rationing. Via/ Library of Congress

Americans were given 64 ration points for fresh foods like meat and 48 for canned and bottled items per month, with more severe cutbacks for individual designations of coffee. In fact, the coffee allotment has been said by some to have been the hardest to deal with. There are some arguments that American eating habits and serving sizes changed little during rationing, and that shortages were usually only temporary.

From the photo below we can see that in 1943 these canned goods were “worth” between 1 and 15 points per can, with the big cans of juice on the upper end of the scale- this means that a family would have been able to afford a wide variety of canned goods in decent quantity. 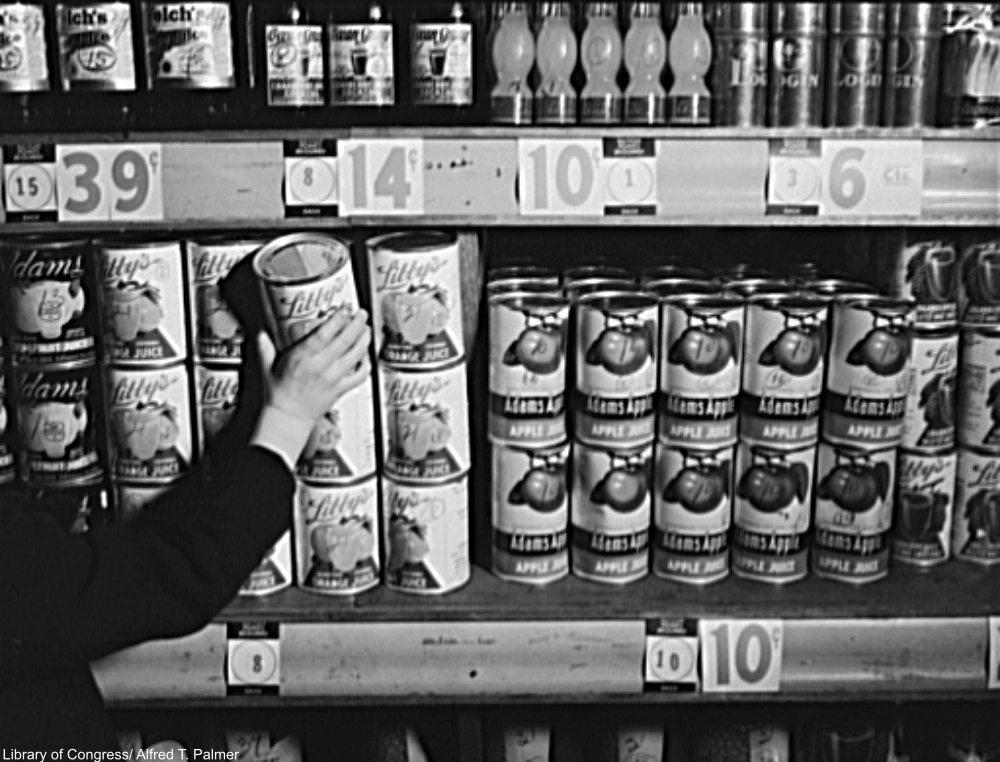 As part of the Lend-Lease Program and other international agreements, England and the U.S. were responsible for supplying large quantities of food to Germany, Japan, and parts of Europe, though England was much harder hit in that department.

The loss of crop fields to bombing, combined with a supply system that relied heavily on imports, meant that the U.K. had much more severe rationing and for much longer than the U.S. Sugar was rationed in the U.S. until 1947, 6 years before sweets were freely available in Britain.