This Forgotten Tradition Made Thanksgiving More Like Halloween Than Turkey Day

For many people, Thanksgiving is one of their favorite holidays. Not gifts, just a lot of really good food and people you love to share it with. But, the way we do Thanksgiving today isn’t always how it was done in the past. Inspired by Guy Fawkes celebrations, early Thanksgiving Day parades were often chaotic and disorganized. Noise-makers, confetti, and singing made the day all the more rowdy. In a take on the English tradition of mumming on Guy Fawkes Day, children and adults would go from house to house causing mischief and begging for money or candy all while disguised in some manner. Those in costume were called “maskers” and Thanksgiving was a day of merrymaking in the streets. 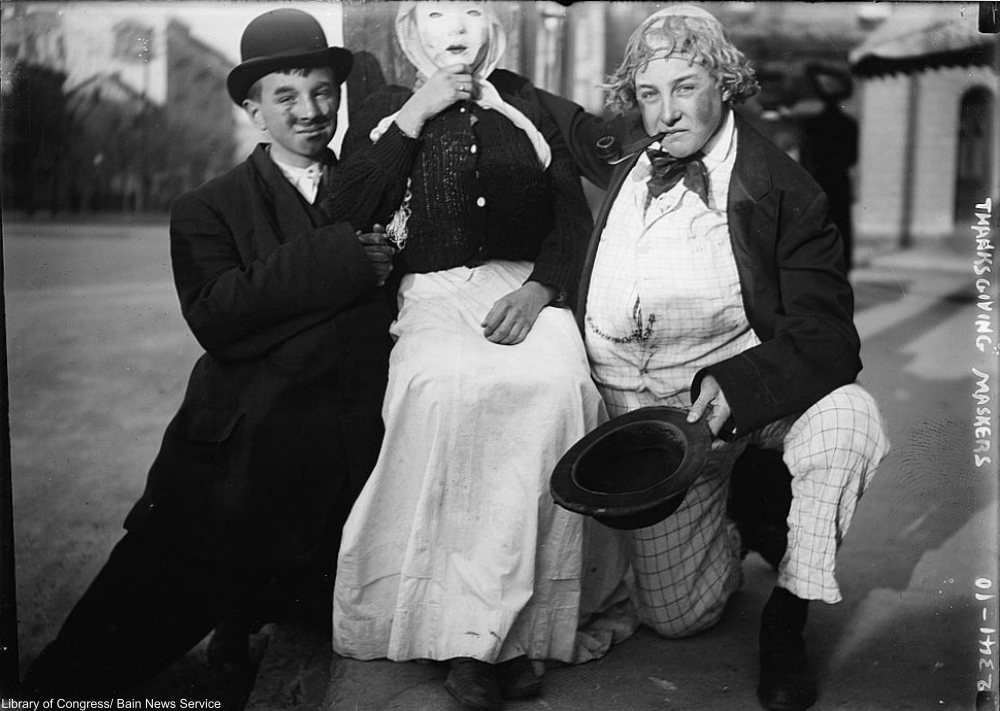 The child in the middle is most likely a boy since dressing as a girl was a common costume for boys on Thanksgiving. Via/ Library of Congress

Particularly around the turn of the century, in cities like New York and Chicago, folks were dressing up in scary or ridiculous costumes and roaming around their neighborhoods on Thanksgiving. Back then, Thanksgiving was the boom time of year for shops that sold costumes, not Halloween. Masks were usually made from paper mâché. Often the maskers would dress up like ragamuffins or beggars and boys dressed as girls was another common theme. Instead of “trick or treat?” the maskers would ask, “anything for Thanksgiving?” During WWI, gas masks were sometimes used for dressing up on Thanksgiving. 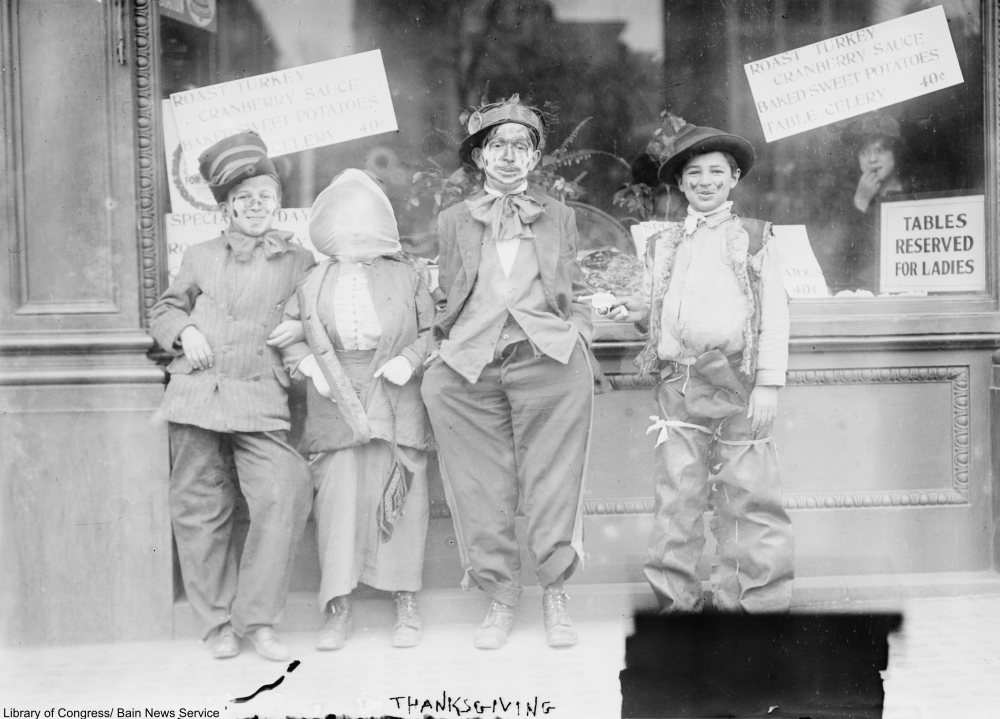 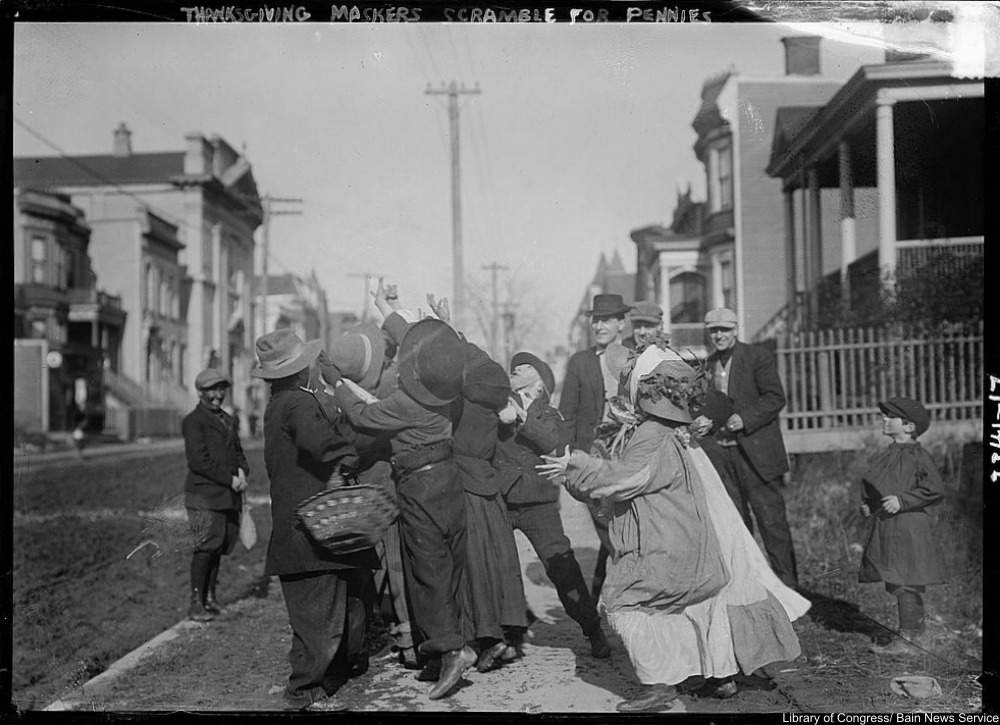 A group of children in costume scramble for pennies on Thanksgiving. Via/ Library of Congress 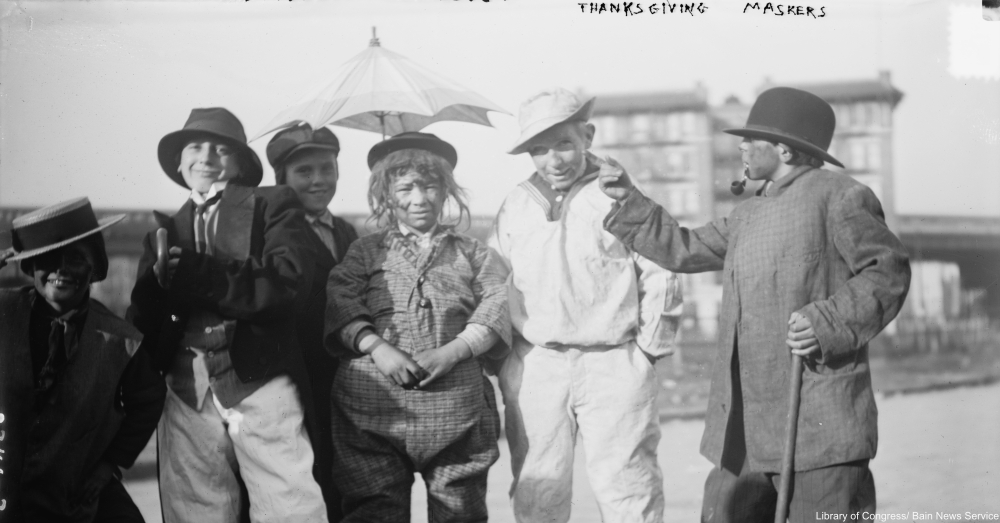 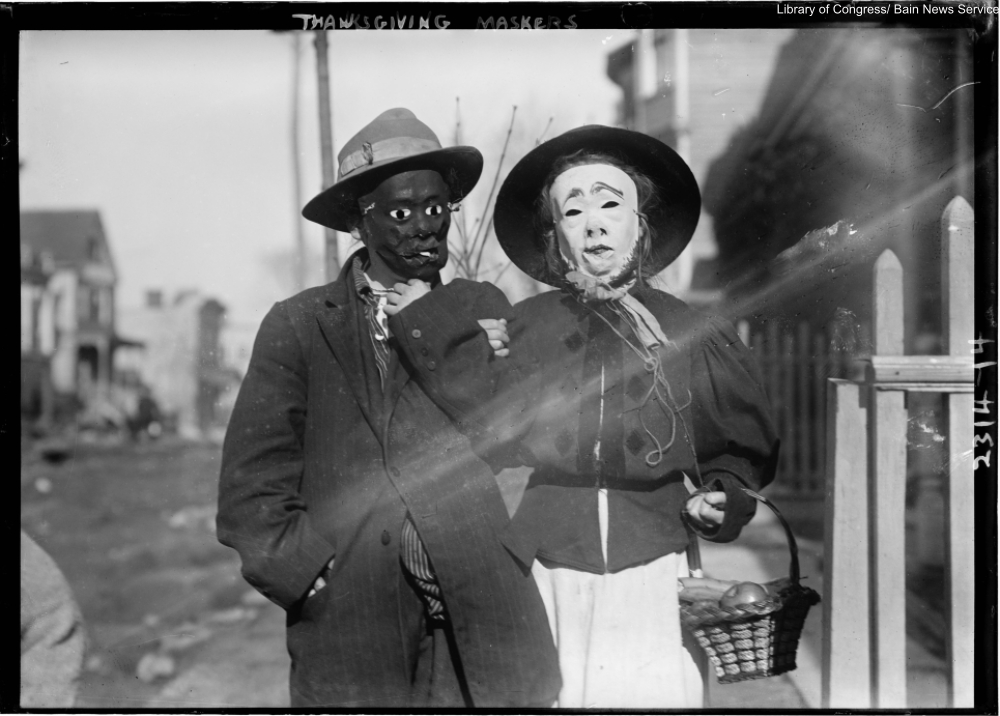 Children often went from house to house with a basket to collect their goodies. Via/ Library of Congress

This tradition eventually began to merge with Halloween, as Thanksgiving became less of a raucous holiday. It wasn’t until after WWII that the “ragamuffin” parades on Thanksgiving completely gave way to a more culinary experience of Thanksgiving and the Thanksgiving Day parades that we are more familiar with. But, the fun had to go somewhere. Halloween became the holiday to dress up, act wild, and beg for sweets and maskers became trick-or-treaters. Halloween has its roots in the Celtic celebration of Samhain (pronounced Sow-win), a time when the impending winter struck gloom into the hearts of farmers.

Eventually the traditions of Thanksgiving in the U.S. were intertwined with those for Halloween and the two separate holidays as we know them came into being around the middle of the 20th century.

It’s interesting that how we celebrate our holidays has changed so much! Just imagine New York City 115 years ago on Thanksgiving Day, brimming with the playful spirit of Halloween. This long-lost tradition sure does sound like a lot of fun.

To get into the Thanksgiving spirit, here’s a recipe for stuffing from the 18th century!