The Mystery of the Blythe Intaglios

The world is full of natural wonders both large and small. But, there are some that are ancient, yet are still remain unexplained in their purpose and technicality. In parts of Mexico, Peru, and the American Southwest there are incredible, large-scale, ancient carvings that researchers still don’t know the exact purpose of. The carvings near Blythe, California, are known as the Blythe Intaglios, while in Peru the ancient geoglyphs there are called the Nazca Lines. 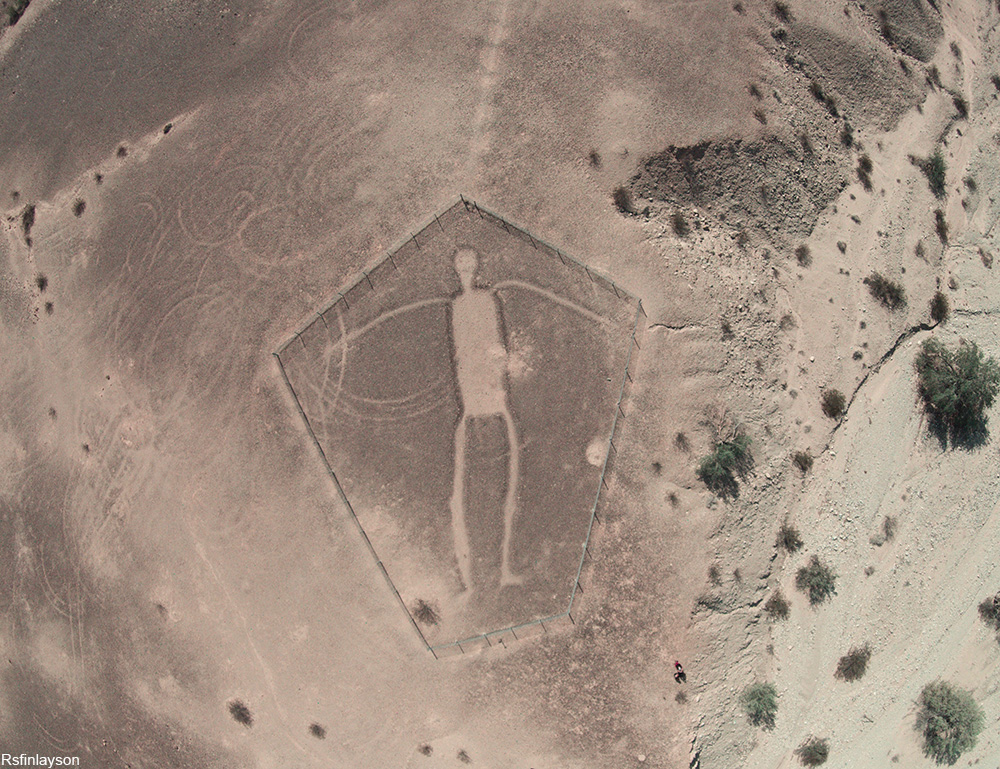 One of the huma-like geoglyphs near Blythe. Via/ Wiki Commons

Many people have referred to these massive artworks as drawings, but they are actually carved into the rocks. The outer layers were painstakingly scraped off to reveal the lighter stone color underneath. All this was done so that someone from overhead would see the shapes of people, animals, and other representations in a time long before drones, airplanes, or hot air balloons. The unknown origins of these carvings have led to quite a lot of speculation about what purpose they served, and who might have made them.

There is a gathering of these carvings in the Colorado Desert, a part of the Sonoran Desert, of where the largest of the carvings representing humans measures 171 feet, which is wider than a football field. 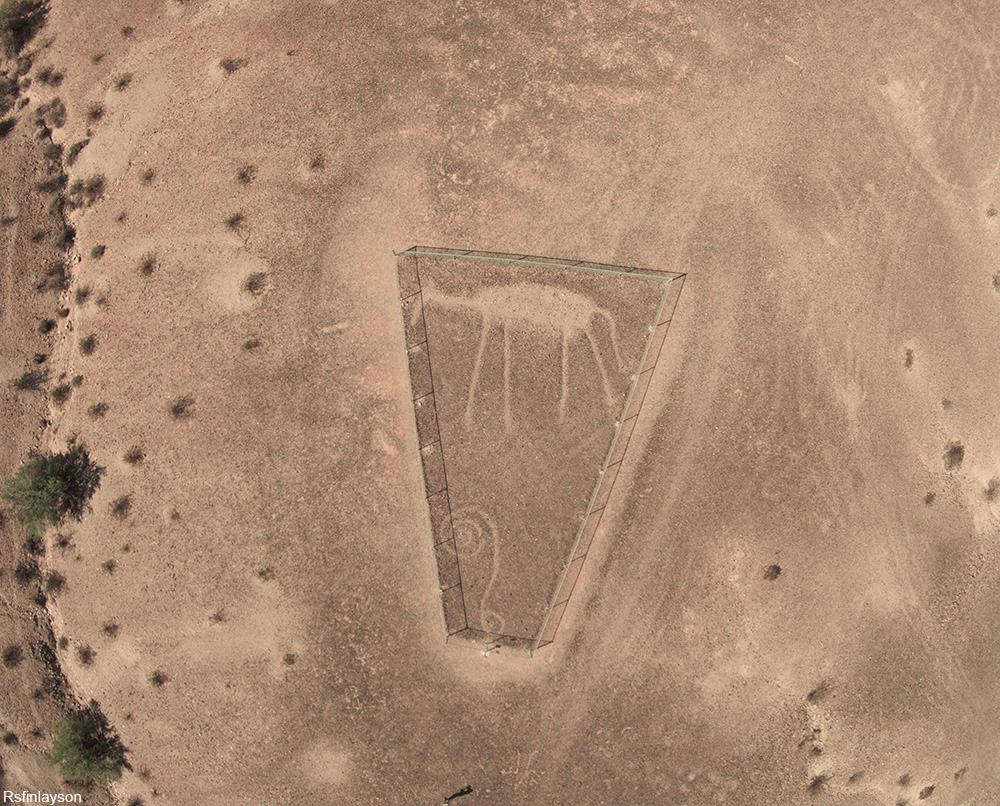 The first “discovery” of the Blythe Intaglios occurred in 1932 via an aircraft. Seen from the ground they are all but hidden from view when see “close up”. So how did the creators of these works even see what they were doing well enough to make these large scale carvings that are so clear that we can still tell what they represent all these years later?

It is now believed that the stone carvings in the U.S. were probably made between 450 and 2,500 years ago (depending on who you ask). They are thought to have been made by the Mohave and Quechans who reportedly say that the human figures represent Mastamho, son of the Creator, who brought forth the Colorado River. The animals are said to represent his helper. 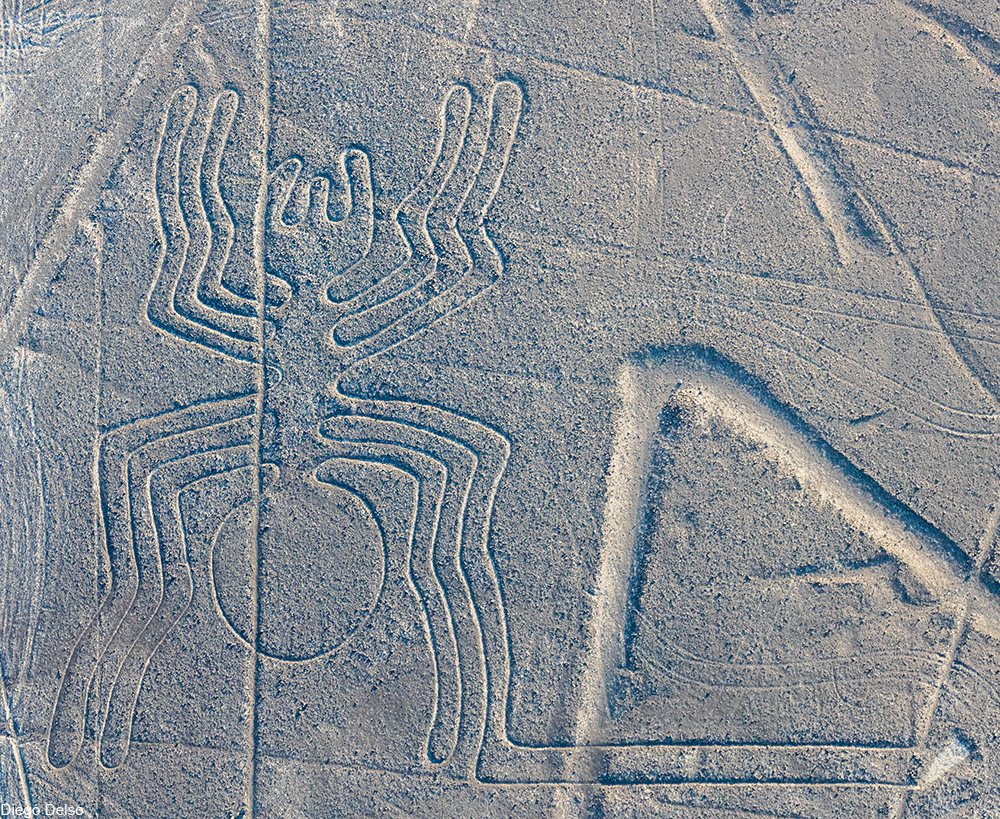 Similar geoglyphs have been found in Peru, although the style of figures there is much different. The giant Peruvian carvings include figures with elaborate hairstyles and menacing postures as well as a giant snake with a head at each end of its body. The largest of the Peru geoglyphs measures over 30 miles long.

The Peruvian geoglyphs are thought to have been created by the ancient Nazca culture, a people that flourished in Southern Peru between 100 and 800 AD when they were wiped out by massive flooding. The Nazca were agriculturalists and may have sealed their own fate by clearing more land for crops after the floods, resulting in massive soil erosion and famine. The Mohave were also traditionally farmers. 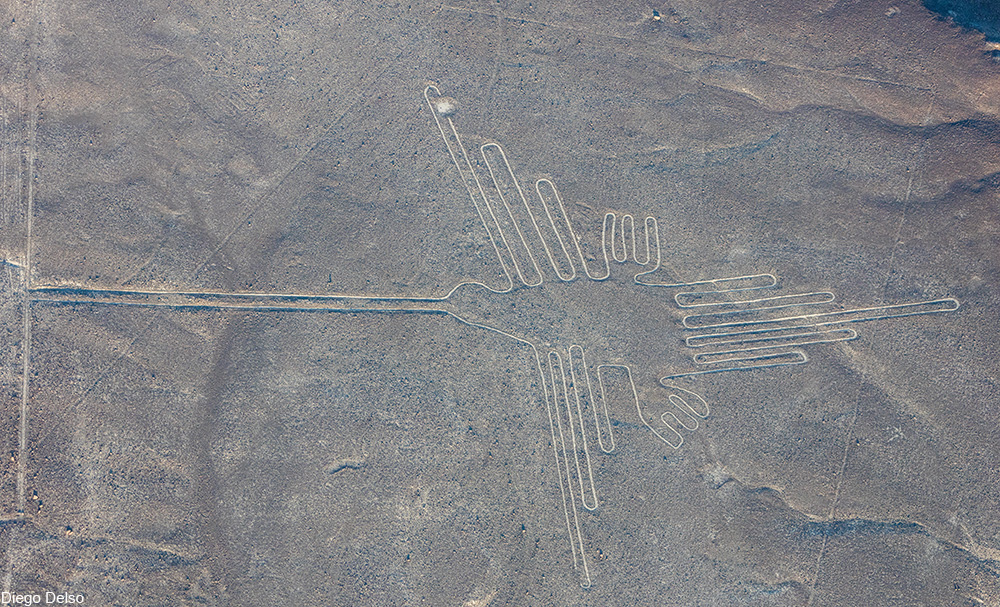 “The Hummingbird” Nazca Line may actually depict the hermit bird, which unlike the hummingbird, is native to Peru. Via/ Wiki Commons

While there have been theories about the carvings having been drawn so that aliens could see them overhead, it’s possible that the geoglyphs were made with the intention that the gods would see them and come to the aid of humans. Similarly, they could also be depictions of myths or symbols to ward off danger and evil. The biggest mystery still remains how they made the giant works of art without being able to check their work from overhead.