We all know and recognize that luminescence when we see it. Pearls have been used for thousands of years in jewelry, clothing, furniture and home decor. While there’s always talk of natural versus cultured, and fresh versus salt water pearls, we decided to take a closer look at mother of pearls and their prominent role in cultures around the world. Read on to learn about mother of pearl, collecting pearls, and how to spot the real thing when you see it… 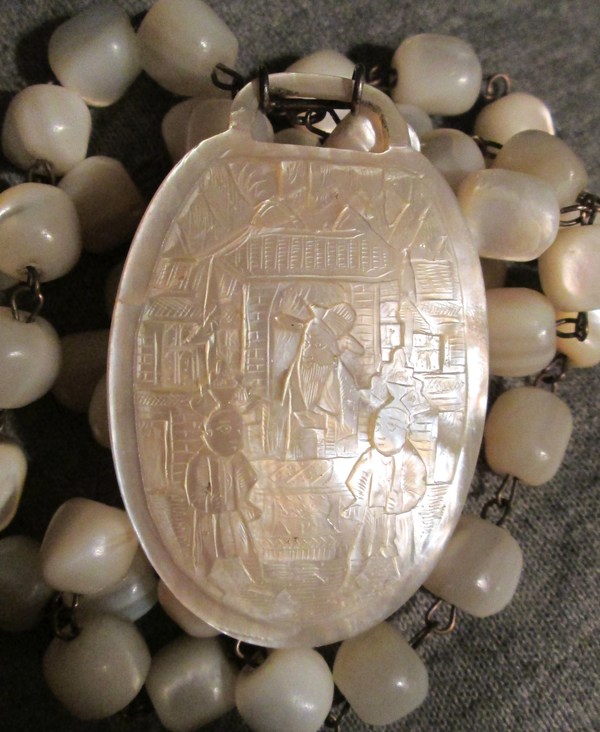 from: Bridget Borchert: “Lovely old hand carved mother of pearl pendant and long m.o.p. bead necklace. This came from India although I am unsure if it was made there. A gift from a friend whose grandparents and mother lived in India from about 1925 to 1950. They were in the tea business. Highly detailed carving. “

Pearls have been a part of cultures around the world for thousands of years, from ancient Mesopotamia to Polynesia to England and the U.K. Obviously a preferred choice for jewelry, making up endless strands of pearl necklaces and bracelets, pearls and mother of pearl also feature heavily in musical instruments and furniture: inlaid elaborately into tabletops, mirrors and chairs.

Mother of Pearl or Nacre (derived from the Arabic word for shell, “naqqarah”) is the organic, iridescent material that makes up the inside lining of various mollusks’ shells, such as oysters, mussels and abalone. The outer layer of a natural pearl is made of this material and that’s where it gets its recognizable sheen. The phrase “mother of pearl” can refer to either the pearl or the shell of the creature in which it’s found. Pearls are created when a tiny particle of sand or bone is trapped inside an oyster and the organism secretes calcium carbonate that grows and hardens around the piece of sand. As long as the pearl is nestled in the oyster, covered by calcium carbonate and the soft, shimmery outer layer, the pearl continues to grow. Some countries cherish the pearl, whereas others worship the mother of pearl shell lining, considered the source and mother of the pearl’s beauty. 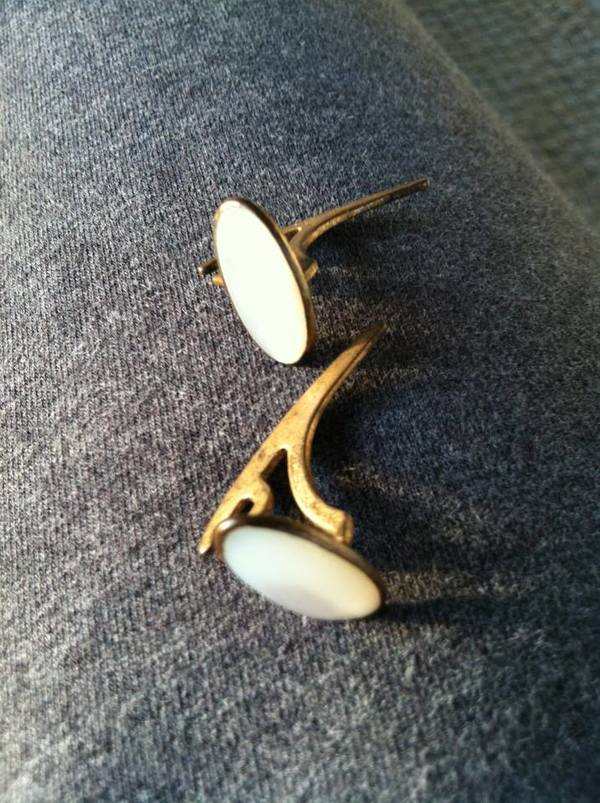 from: Lorrie Barker: “Can anyone tell me what these are ? They were in some things of my grandmothers, and probably belonged to her mother. The stamp on them says “patented April 26, ’04. I assume that’s 1904. The stone looks to be Mother of Pearl…..maybe Moonstone.”

“Natural pearls” can be found in either fresh water (rivers in England and Ireland) or salt water (Persian Gulf)although salt water pearls are more highly sought afterand also refer to harvested pearls, since they’re still grown and created in a mollusk. As with other gemstones, searching for mother of pearl is something that is time and labor-intensive, requiring divers to go down and retrieve a large selection of mussels, oysters and abalone; this made them all the more valuable. It wasn’t until the early 20th century that two Japanese men (and later Kokichi Mikimoto) came up with a new way of harvesting pearls. Cultured pearls are the result of inserting particles manually into oysters and instigating the growth of a pearl. It allows for controlled mass production of pearls that otherwise would be impossible. 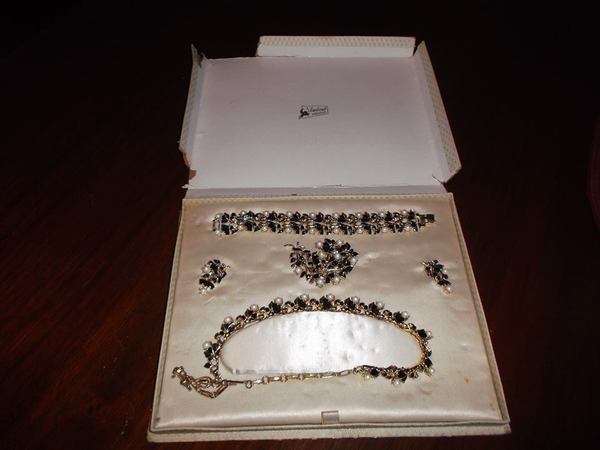 from: Diane Scott: “My father gave this to my mother (both deceased) about 1956.My mother loved pearls.It is” A Jeweleraft CREATION”.I believe my father bought it in either Quebec City or Montreal.My mother gave it to me shortly before she died.I wear it at all special occassions.I have tried to find info on it but have been unsuccessful.”

Distinguishing Between Real And Fake

Mother of pearl jewelry is timeless and classic. If you’re looking for antique pearls, their popularity does make the search a little more complex, since you have to be able to distinguish the real from the fake. Below, some pointers on how to search for vintage natural pearls:

When you’re looking, try to find a certified pearl dealer, but be open to looking at estate sales or flea markets. You never know what you might find and now you have the tools to recognize pieces of value!