History Of The Walking Stick: Canes Were Once A Stylish Accessory

Those seen using walking sticks are likely to have suffered an accident or injury or to have an ongoing issue that causes walking to be difficult without support. However, there was a time when no gentleman would be seen without his cane, and there is a wide range of attractive antique sticks and canes still available for collectors and history aficionados to collect. 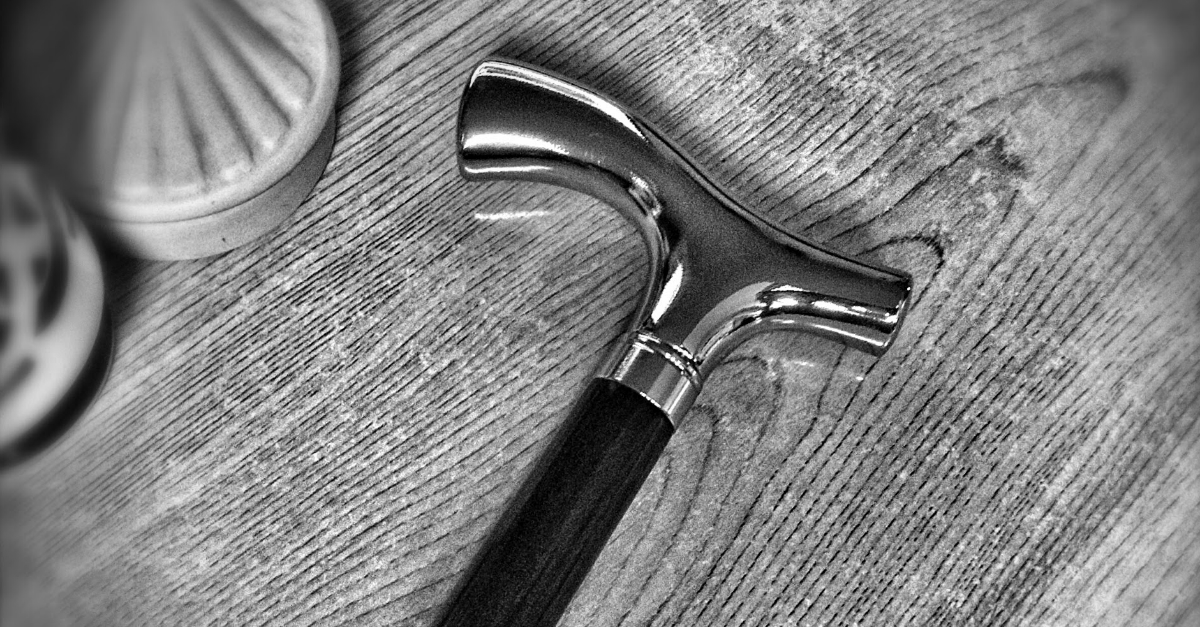 Collectors Weekly notes that the period of peak popularity for the fashion accessory was between 1550 and 1930. That’s a period of 380 years, which means that there was plenty of time for several cycles of fashion and bodies of etiquette to arise, despite the natural longevity of the devices. While the stick was a key male accessory during the entire period, as well as being popular for practical reasons before and after its epoch of fashion, certain eras saw its use burgeon among ladies too. However, their sticks often had additional uses.

M.S. Rau Antiques notes that when ladies began to wear extremely tight lacing, sticks with vinaigrettes or smelling salts were often carried to revive them in case of fainting due to lack of oxygen. The sticks that were designed to carry these, which often had filigree sections to allow an infused sponge to be inserted, were also used to disperse perfumes into the often smelly public environment a lady might find herself walking through. 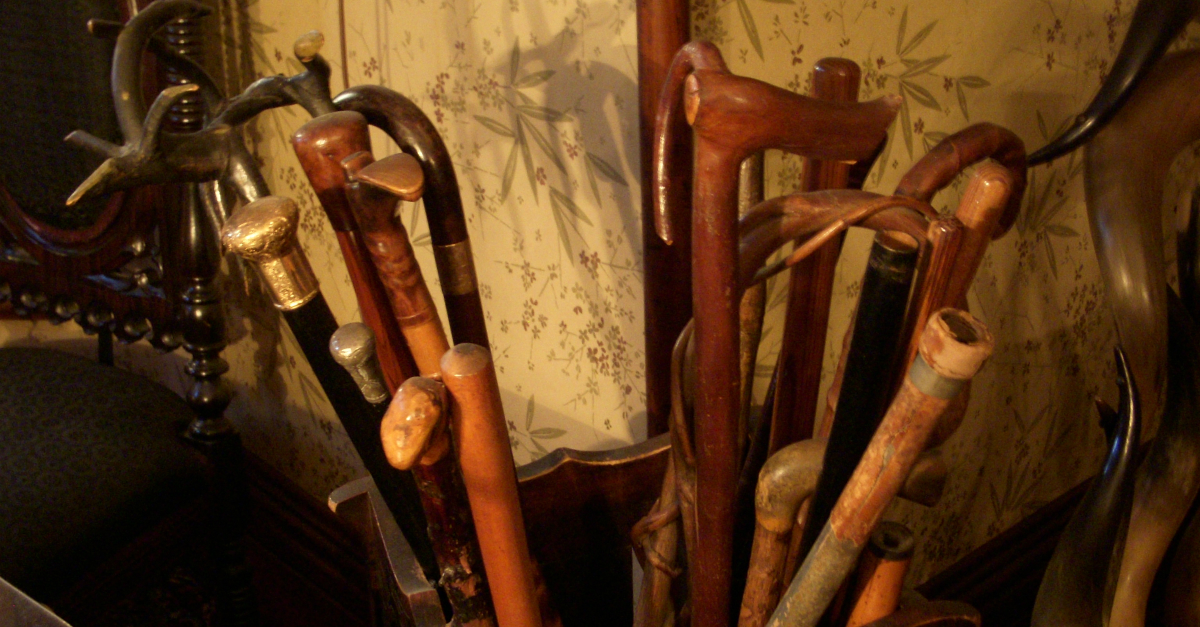 Men’s gadget sticks generally had a different purpose, though the fops of Regency England did have a penchant for their perfumes. More commonly, though, men’s sticks concealed weapons, drugs or alcohol, with the infamous sword cane being only the most notable example. Canes containing muskets, poisons, darts and fishing rods were all patented at one stage or another. Some more intriguing devices were also included in canes, including a bicycle and, more commonly, spyglasses or telescopes.

During their period of peak popularity, canes essentially ceased to be a useful tool and simply became an accessory. During this period, both the appearance of the cane and the way in which it was carried and used spoke volumes about the relative standing of its owner and his opinion of himself and the others around him. A gentleman could not carry his cane under an arm nor lean on it, thus tying one hand up in a similar manner to a modern ladies purse and signifying that he did not have to fetch and carry for himself. It was also bad manners to bring a cane into the presence of a king or similar ruler or head of state, probably because it was likely to contain a weapon.

Canes used as social signifiers tended to be ornately decorated and beautiful works of art. Fortunately, their robust wood and metal construction means that many of them have survived to modern times. Some especially fine examples are found in the work of Faberge and Tiffany, and these are, of course, key pieces for collectors. However, there were many smaller, less famous design houses that produced exquisite work on walking sticks and canes in the 17th, 18th and 19th centuries, and these are well worth keeping an eye out for. 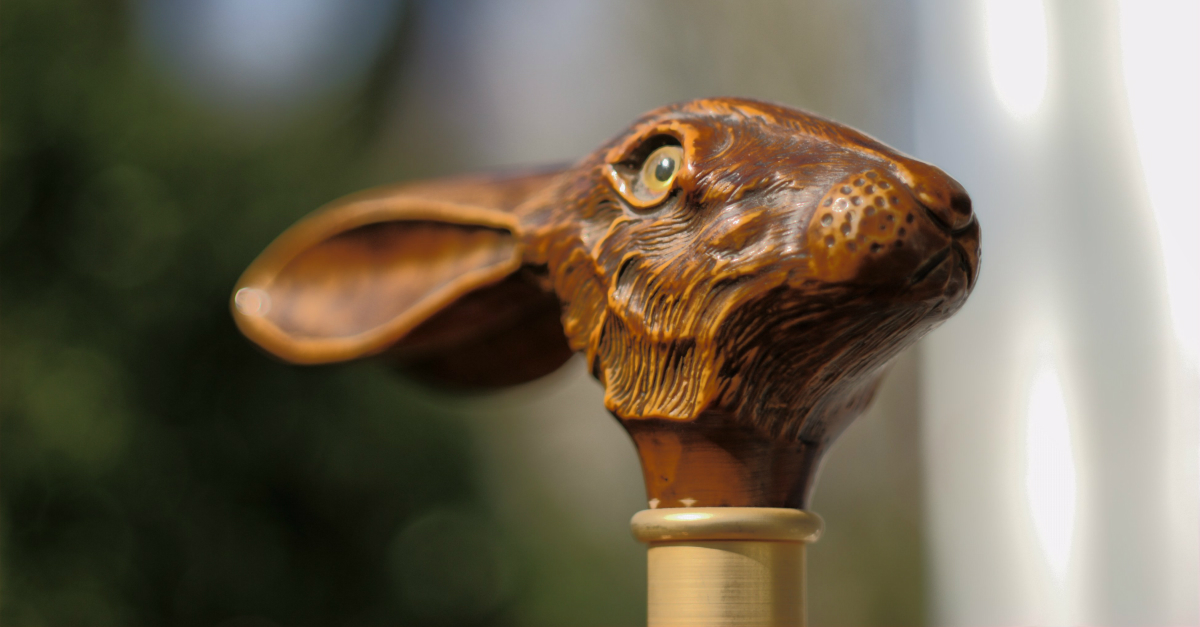 The value of a given cane depends on its provenance, its materials, its creator and the rarity of the cane. While the filigree and decorative canes are obviously works of art to be appreciated, well-carved folk canes with associated local or personal stories and gadget canes in good working order are likely to be more attractive pieces to collect for the beginner or historian because of their historical significance. This is also the case for the special canes that occasionally surface that were used to display allegiances or memberships, such as the rare example that displays a profile of Napoleon only when held to the light and must have been created to show its owner’s allegiance to the deposed Emperor.

Collecting is a joyful hobby, which offers the opportunity for learning and discoveries at every turn. Canes and sticks are available in a huge range of varieties and ages, so spending some time deciding what you’d like to focus on is a good idea. Check out Dusty Old Thing for information and articles on a range of antiques and historical eras to pique your interest and help you find your focus.