Can You Tell the Difference Between Antique and Reproduction Cloisonné?

The depth of color, intricate designs, and exquisite quality are simply captivating. But don’t be fooled, modern cloisonné is worth very little compared to antique examples. Can you tell the difference? 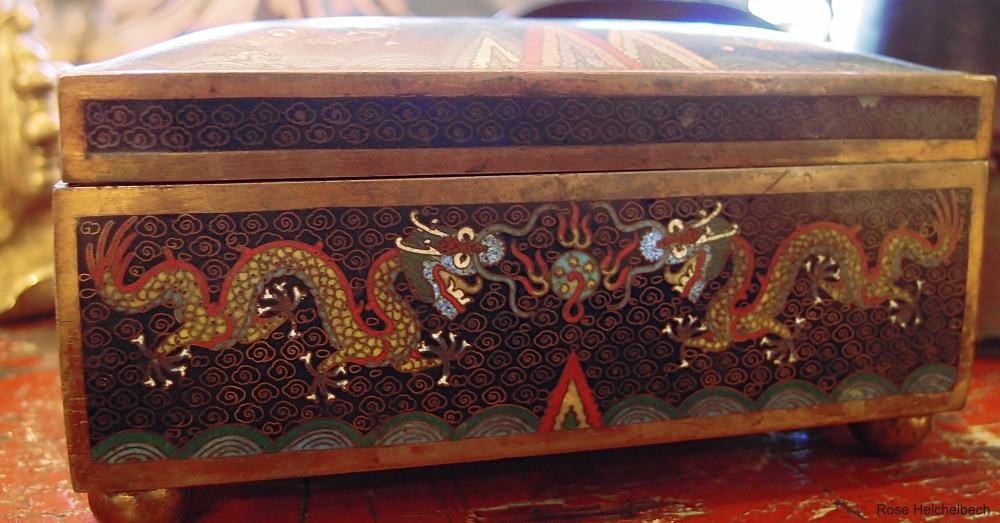 From the French word cloison, meaning to separate, the techniques of cloisonné involve using wire or metal dividers to separate the various colors of enamel that lie on a metal base. Thought to have originated in the Middle East, the technique spread though the Byzantine Empire and then into Asia. The metal base of a cloisonné piece is layered with compartments that originally held either a powder of crushed gemstone or crushed glass to create the enamel. The piece is then kiln-fired several times in order to force the powder to melt and spread into the cloisons, although divisions between enamel colors are not always marked by metal. The pieces are then highly polished. 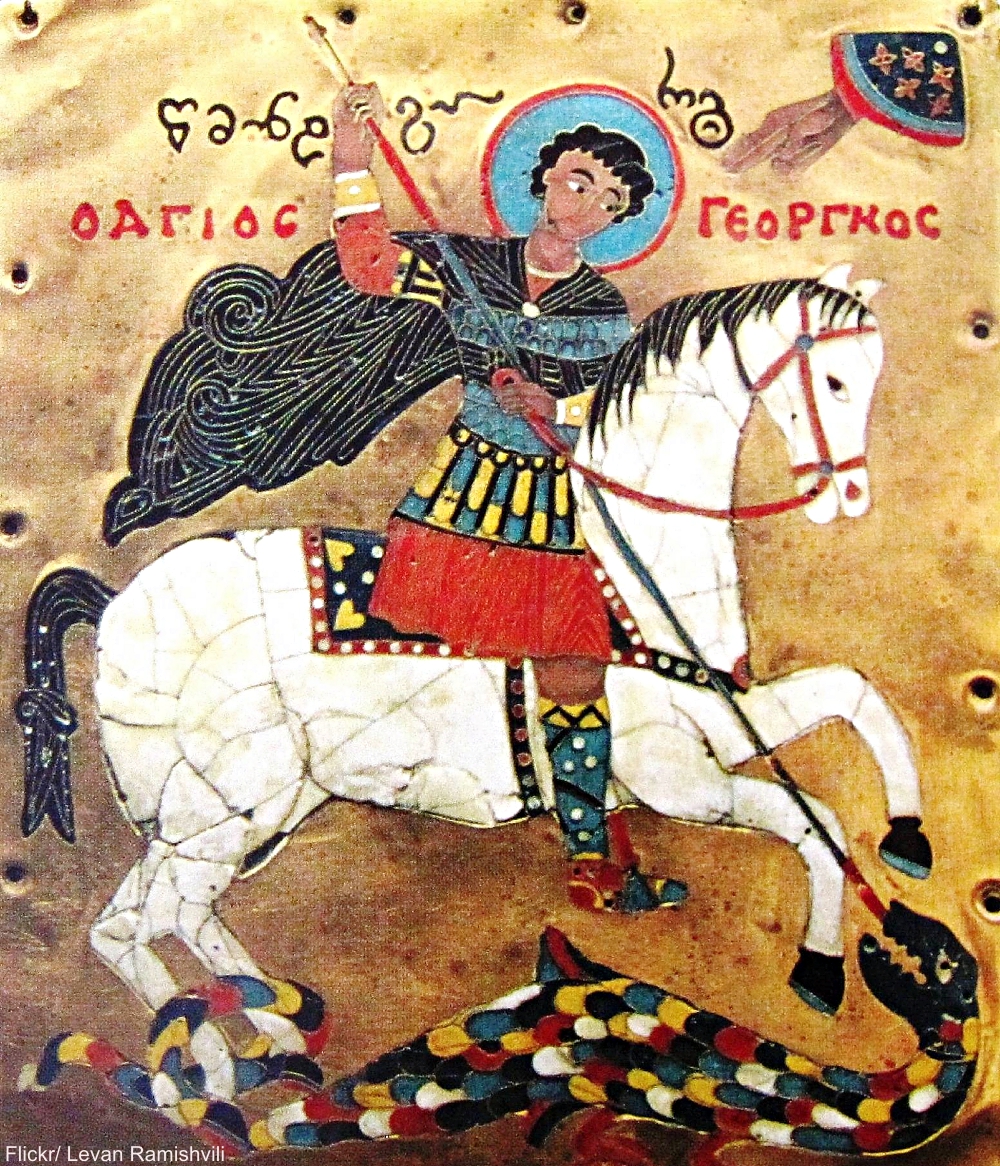 During the Ming dynasty in China (though some argue it was earlier), artisans began using cloisonné techniques in their own creations. It became popular in Japan around the 16th century. In both countries new techniques were developed to refine the techniques and create a finer finished product. Common items would have been found in a temple or as palace decorations, but eventually they were used in a wide variety of decorative metal items such as vases, boxes, jewelry, sword handles and scabbards, and figurines to name a few. Often focusing on natural subjects, the pieces usually depict birds, animals, or natural elements like wind. 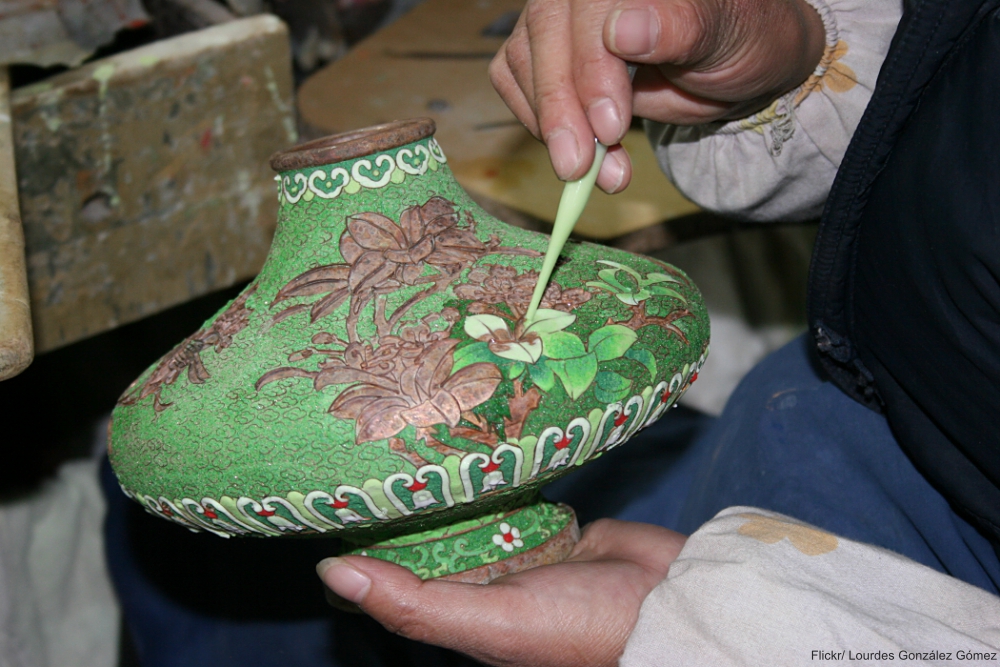 Some of the most famous and sought after cloisonné pieces are from Tzarist Russia and the famous House of Fabergé. The older a piece of cloisonné is, usually, the more money it is worth. Cheaply-produced pieces of cloisonné started being produced in the 19th century, though they possess far more value in most cases than 20th century examples.

Consider a modern cloisonné piece: it may have an uneven or pale surface color or may have raised, bumpy, or detached cloisons. Compare that to an 18th century piece that has a smooth texture (though probably aged) and vivid colors. Modern examples may have inferior metal or alloy bases and may even be decorated with resin. So definitely feel the weight of a piece to help ascertain its age. The craftsmanship is far better on the older pieces and that is one way to tell the difference. High-quality modern examples certainly are in production, but the value for those pieces will be based on design and maker, not age. Ming dynasty examples can be worth tens of thousands of dollars, while many antique examples that have less provenance sell for $200-$500. The same general price range also applies for antique Japanese cloisonné. Byzantine era cloisonné is in a very different price class, as is Fabergé. However, even if you have an older piece it will most likely have been made in the last 300 years in Japan, China, or Europe.

Be aware of pieces that are lightweight or appear to be made from less-sturdy materials. Poor craftsmanship is a telltale sign that a piece is relatively modern and mass-produced. Items like these in many cases have no more monetary value than equivalent-sized pottery pieces produced during the same years. Some modern pieces are attempting to look old. Many pieces, however, are simply products of extensive artisan traditions that stretch back centuries.