Antique Spotlight: If You Own Any Uranium/Vaseline Glass, Check This Out!

While Depression-era glass was and continues to be wildly popular as a collectors item, there are other types of glass that remain a hot commodity, be it for their color, shape, rarity, or material; Uranium glass (or Vaseline glass, as it’s also called, known for its petroleum jelly yellow color) is just as highly sought after, and perhaps even more intriguing than Depression glass because of its chemical makeup, as showcased in this video.

As you may have guessed, Uranium glass contains uranium oxide, which gives the glass a yellow or yellow-green tint, makes it radioactive, and causes it to glow vibrantly under a UV black light…if that’s not cool on some level, we don’t know what is! 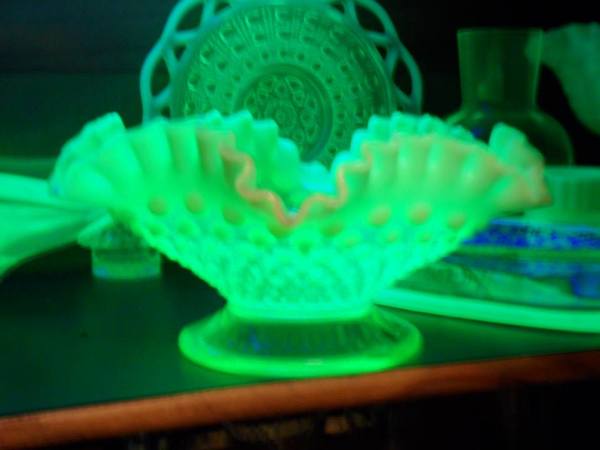 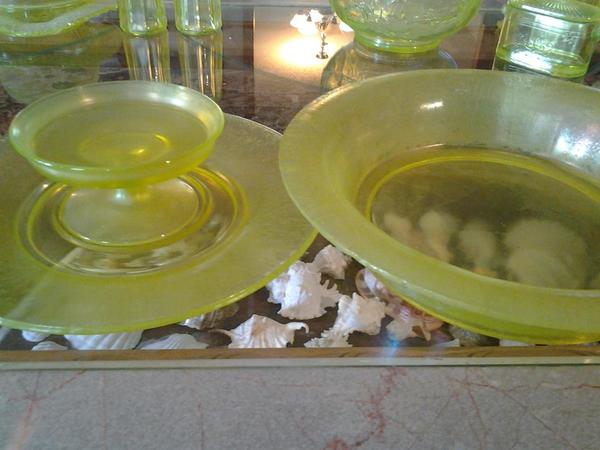 from: Carol Musselman: “Dont know anything about this. Vaseline glass bowls.”

While use of uranium as a coloring agent has been in practice for hundreds of years, it wasn’t until the mid 1800s that it became common in glass-making, and only in the 1880s that it gained massive popularity. From there, uranium oxide was a commonplace component (creating the standard yellow, Vaseline-colored glass), with the addition of iron oxide (rust) added later to make each piece more green, in accordance with popular demand. This practice continued until World War I when stringent laws were made, making uranium a heavily regulated substance. Deregulation occurred in 1958, but Uranium/Vaseline glass produced after that wasn’t the same as before, due to the depleted uranium that was used instead of the more radioactive strain from before. 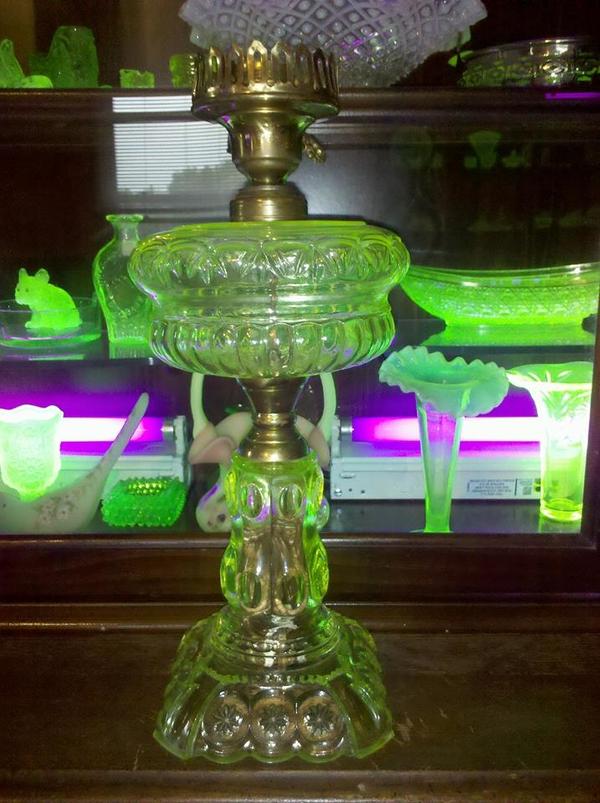 from: Carl Leonard: “I looking for a 10 inch shade for this lamp it’s a yellow vaseline glass series 90 moon and star pattern lamp any help would be very appreciated” 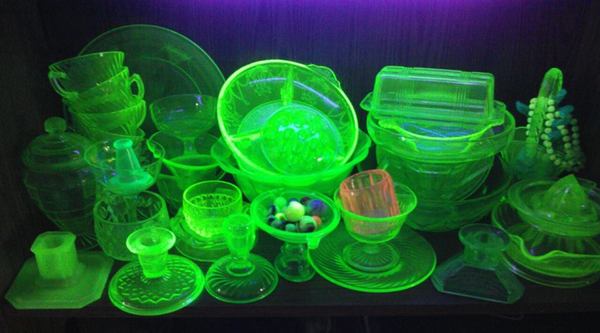 from: Raun Lynott: “Part of my “Green Glass” collection which is all Vaseline glass that glows under Blacklight .”

Uranium glass is characterized by the presence of uranium (oxide) and, in some cases, iron oxide, which is what makes it green. Tinged varying shades of yellow, Vaseline glass can have an oily sheen to it, and is generally, although not always, translucent. While you may be able to recognize some pieces just by looking at them, it takes a UV black light to officially see whether or not the glass flouresces due to the presence of uranium; keep in mind, the glass glows green only because of the uranium, not because it’s radioactive.

In reference to Uranium glass’ radioactivity, it should be noted that, while pieces from the late-19th and early-20th centuries were comprised of 2-25% uranium, the level of radioactivity is still negligible in the long run; people are exposed to radioactive materials every day and, while we wouldn’t recommend eating or drinking from them, these pieces weren’t actually considered harmful. 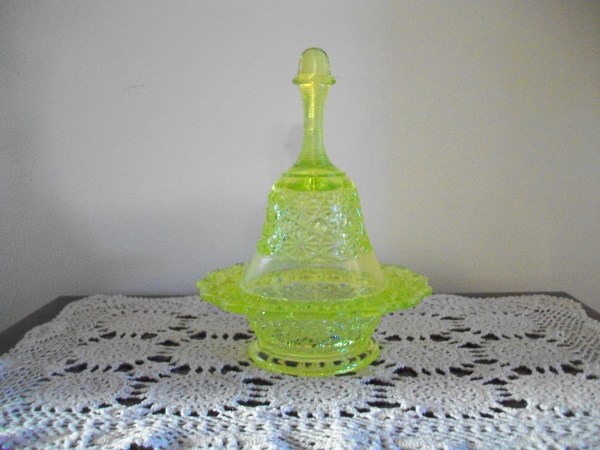 from: Janice Hill: “Can anyone tell me any information on this Vaseline Glass dish with lid?” 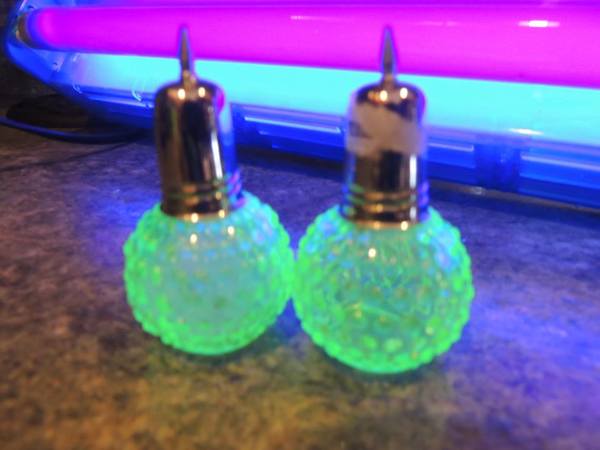 If you’re a collector or interested in starting a collection of Uranium glass, it can be hard to know how to start your search, especially when there are so many beautiful glass pieces out there. Below, we’ve got a few pointers to keep in mind when you come across pieces you’re not sure about. 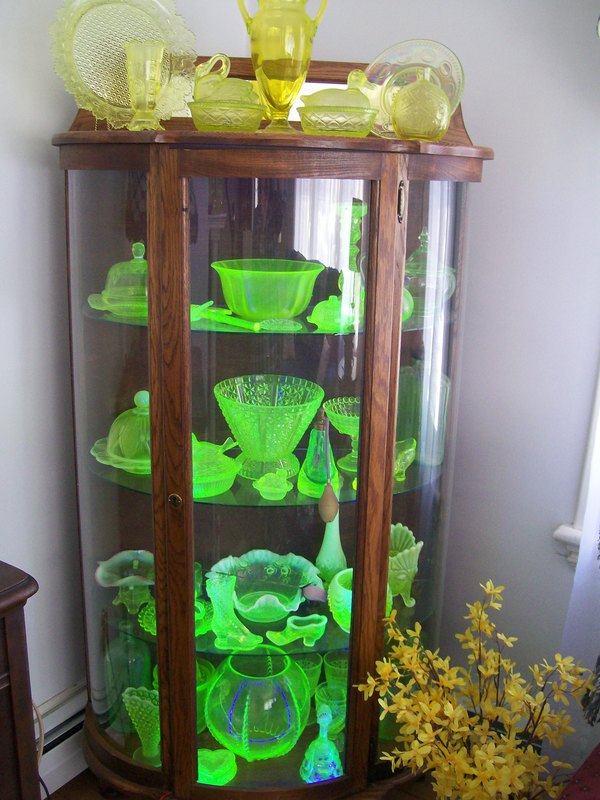 from: Paulette Buongirno: “My husband fell in love with Vaseline glass when he saw a display at a local restaurant. His collection is displayed in a antique bow front and has the black light install to show the true beauty. You can see the difference between lights on/lights off in this picture.” 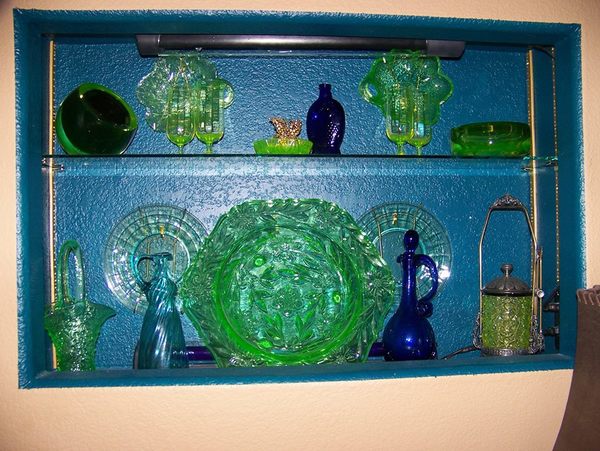 from: Cherrie Demand Whipple: “I love Vaseline glass ;I inherited some and found unusual pieces at estate sales and shops. I have four large niches in my living room with black lights in them. They look so nice.”

We don’t know about you, but we find the concept of glowing (albeit radioactive) glassware super cool – here’s a video of it under black light to see what it looks like! – and we hope this article helps anyone and everyone interested in expanding their collection. If you’re not afraid of (teeny tiny doses of) radiation, good luck with your search and happy hunting!