One worrying sign of aging is when we start to tell stories that sound an awful lot like the ones our parents told. Recently I found myself telling someone how far I, as a child, walked to school in a blinding snowstorm. The truth, however, which I had to quickly add, was that the walk was just 5 blocks to a bus stop. It wasn’t really like the story my parents told of walking miles to school–but the theme was the same.

My grocery store sells furniture. Expensive furniture, mass produced, boxy but not chic, most of it sprayed black. I assume it is imported and some kind of pressed wood. But the main thing that strikes me is that it is expensive.

I could launch into one of those signs of aging here and say how our family never bought mass-produced, expensive new furniture that was badly made, that we always scoured thrift shops or rehabilitated old family cast offs. I could be like my parents who told how they “went to housekeeping” with an old drop-leaf table and that they had to sit on orange crates for chairs. But that would only be partly true, both for our story and theirs.

Back in college I took an elective, for fun, in Interior Design. The professor praised rooms that had unmatched pieces of furniture and was critical of the then-popular “suites” or sets. She encouraged us, when we furnished our own places, to look for antiques or to create a mix of antique and modern. She encouraged frugality as a virtue in design. “The medium is always the message” and “Less is More”>

Today we have and use my parent’s drop-leaf table. They had been given it by my Grandfather who got it out of a barn “on the place”. Today we know it as a typical Kentucky cherry drop-leaf, circa 1830-50. There really is nothing special about it. There were probably tens of thousands made, in Kentucky and other states. They are still “out there” in antique shops and at sales and auctions. Generally they are at reasonable prices, not much more than those new tables at my grocery store. 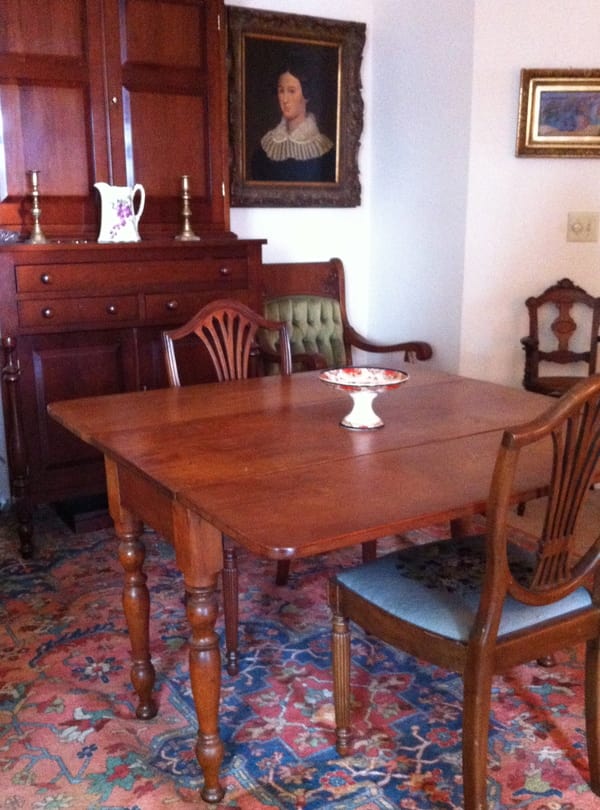 The green chair in the back is part of a parlour set that came from Grandparents. The rug has had decades of use. The transferware comport in the center was picked up for $25. at the Highway 127 yard sale. The dining chairs are well-worn, purchased cheaply. I did the needlepoint. In years past there also was a large Federal table that could seat 12, a Federal sideboard, and an Empire server, but those have gone to make way for simplicity…and the imagination of a time when people played rook around an old table while sitting on orange crates. 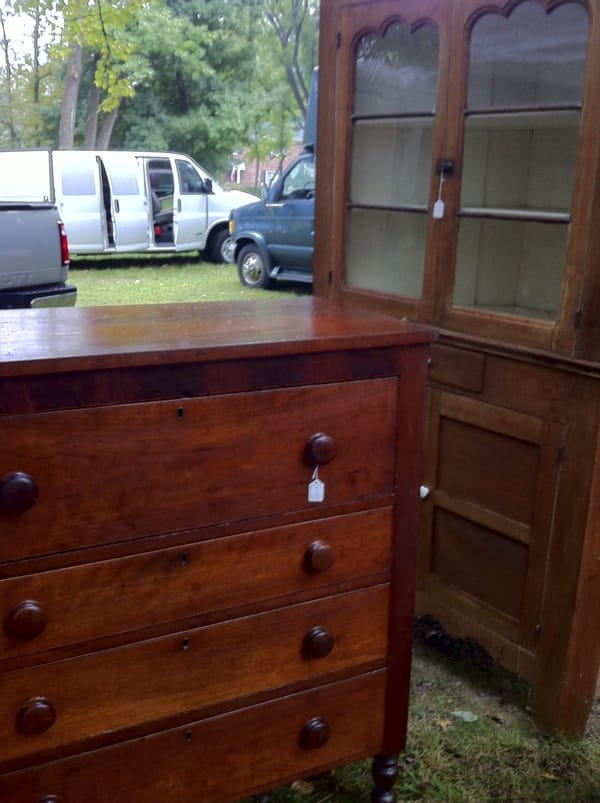 This beautiful antique cherry chest was marked at about $590 at an antique show we attended last fall. It did not sell.

Maybe it is a sign of aging when many of us see antiques as frugal choices for everyday living, when we start talking about “the Hoosier we went to housekeeping with”.

Or, maybe, we’re just smart. What do you think?