Researchers Find A 2,000-Year-Old Realistic Green Mask Inside Of An Ancient Pyramid

There is a lot to be learned from archaeology in Mexico. It obviously speaks about a pre-Columbian history that is well worth considering. The Pyramid of the Sun is one of the more impressive structures, and although it has been studied before, it still yields new surprises.

The Pyramid of the Sun is the largest building in Teotihuacan, and it has been studied by archaeologists for many years. It is thought that the building was built about 2000 years ago. One thing that has been noticeably absent are artifacts, but a surprising discovery took place in 2011. Researchers from Mexico’s National Institute of Anthropology and History (INAH) were on hand for the discovery.

Archaeologists dug a 380-foot long tunnel in the 1930s. In doing so, they arrived at the mother-rock level. That is where they discovered some interesting treasures. Clay pottery shards, animal bones, pieces of obsidian, three serpentine human figurines, and a stunning serpentine mask. It is the mask that is perhaps most interesting because it was the only mask of its kind associated with ritual practices in Teotihuacan found up until that point.

Some experts believe that the items were left behind as part of a ritual for the inauguration of the pyramid construction. That is why they may have been located at the lowest level. The mask is lifelike, which may mean that it is a portrait more than a disguise. Considering the fact that very little information is available for those who constructed Teotihuacan, this could be an incredible find. Conflicting theories also exist for the use of the pyramid. 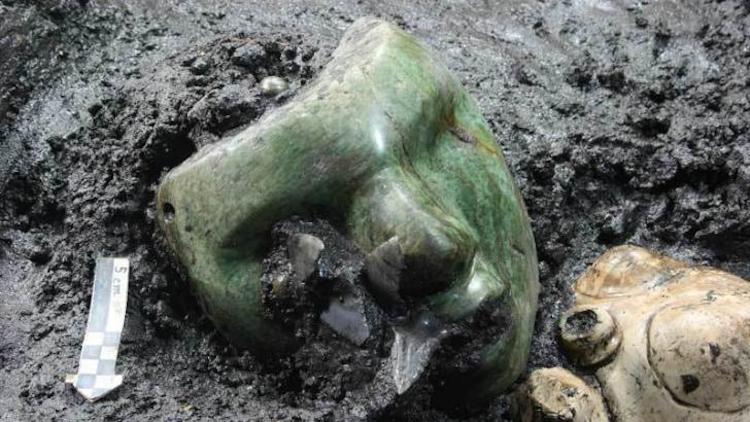 The Aztecs were the ones who named the Pyramid of the Sun, even though they didn’t visit Teotihuacan until centuries after everyone had left. Nobody really knows what the world’s third-largest pyramid was originally named. Teotihuacan is often called the City of the Gods and it is thought that some 200,000 people lived there at its peak. Even though that is the case, researchers are unsure who those people were and why they vanished without a trace.

It’s easy to see why INAH continues to research the area of the pyramid and city. An underground tunnel was even found recently under the Pyramid of the Moon, located nearby. Electrical resistance technology was used to map the tunnel and they never had to break ground.

There is a subterranean chamber preceded by a 49-foot diameter chamber that may yield additional treasures. It is hoped that additional light will be shed on the civilization by what they find in the area. “These large offering complexes constitute the sacred heart of the city of Teotihuacán, the reason why everyone saw it as the mecca of the civilization,” said Verónica Ortega, director of the Integral Conservation Project for the Plaza of the Moon. “What can be found inside them will help unravel the relationship this ancient metropolis had with other regions of Mesoamerica.”