We learn about them in school, and then years later we learn that a species we read about and saw in museums was portrayed with claws and fangs when it didn’t have them at all. Such is the way of dinosaurs, we have so little to go on yet we we know about them. But, up until the Victorian era, the term dinosaur didn’t even exist and the general public lived in ignorant bliss of the huge reptiles that once roamed the planet. In the 1840s, the word had yet to be coined, but that would all change with the work of Sir Richard Owen in London. 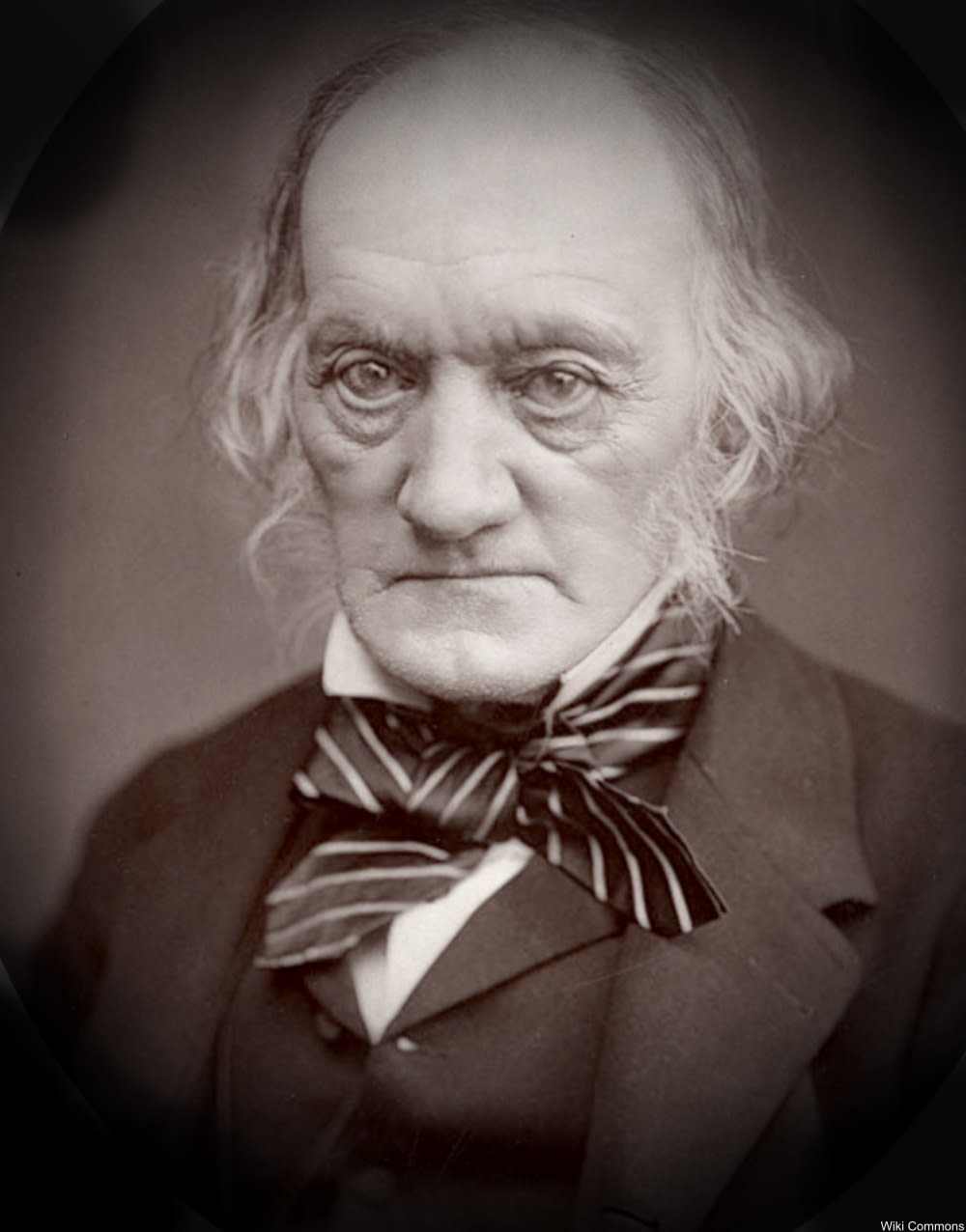 Sir Richard Owen in in 1870s. Via/ Wiki Commons

Sir Richard Owen at one point taught natural history to Queen Victoria’s children, he was respected in his field, though he did argue with a number of his fellow scientists, including Charles Darwin. Owen formed the theory of what dinosaurs were after reading the work of other esteemed scientists like, Gideon Mantell. Owen named this new genre of animal dinosauria, meaning “terrible lizards” in Greek. He first published his findings in a paper in 1842 that set the scientific community on its head. The sensationalist tone of his classifications would soon be followed by even more sensational public displays.

Owen sought to give life to the fossils that had been found and enlisted the help of scientific artists to help the world visualize what they might have looked like. Overnight the Victorians went from a young world to one in which monsters had roamed the earth sometime long before humanity had recorded history. Owen did not believe in evolution though he was incredibly dedicated to natural history. 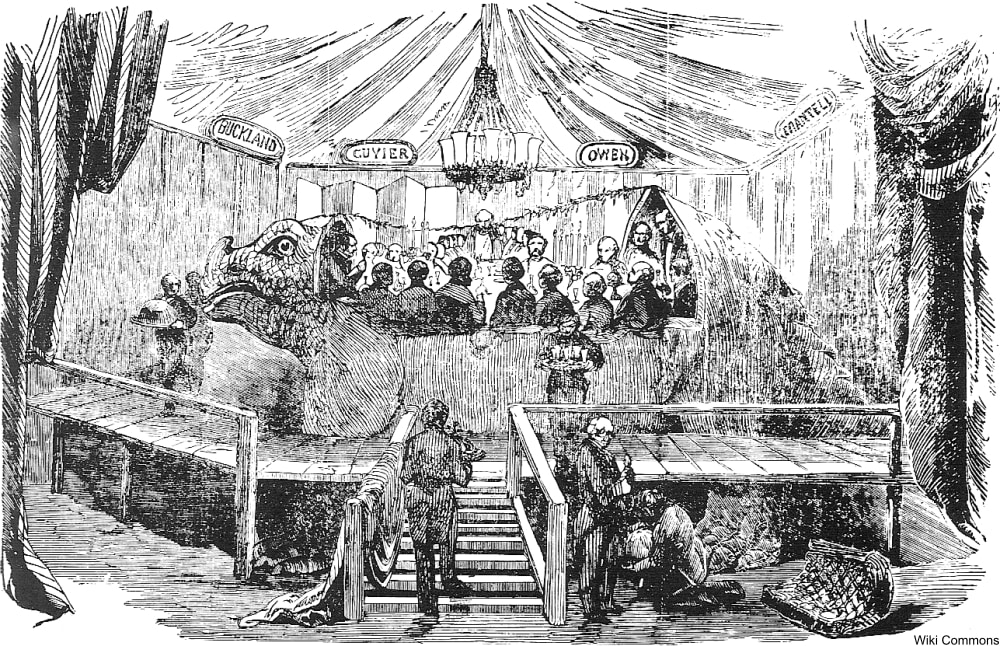 The New Year’s Eve banquet inside a large iguanodon model. Via/ Wiki Commons

When Owen commissioned from artist Benjamin Waterhouse Hawkins the first dinosaur model, the top was kept open and a dining table set up inside. And in true Victorian style a grand New Year’s Eve feast was served to Owens and his colleagues inside this new dinosaur creature. Just imagine feasting inside the giant model of an animal that was perviously unknown to humanity!

The models, of course, were inaccurate because there were still few extensive studies of dinosaurs at the time. But, this was one of the first times when models of extinct animals had, in a sense, brought them to life for the world to see. 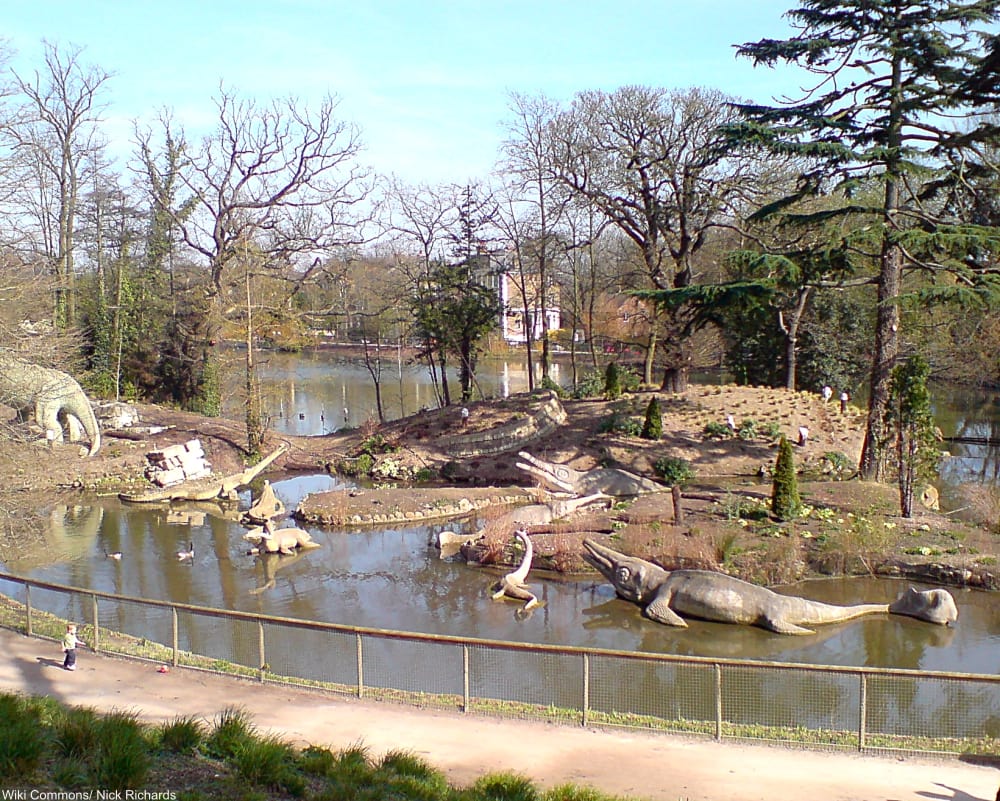 Dinosaur models at the Crystal Palace still on display today! Via/ Wiki Commons

The dinosaur models commissioned for the Crystal Palace in the 1850s, while not totally scientifically correct, were the first examples that regular people could see of what these mysterious dinosaurs might have looked like. Considered to be of historical importance, the dinosaur models are still on display and have recently received a restoration. 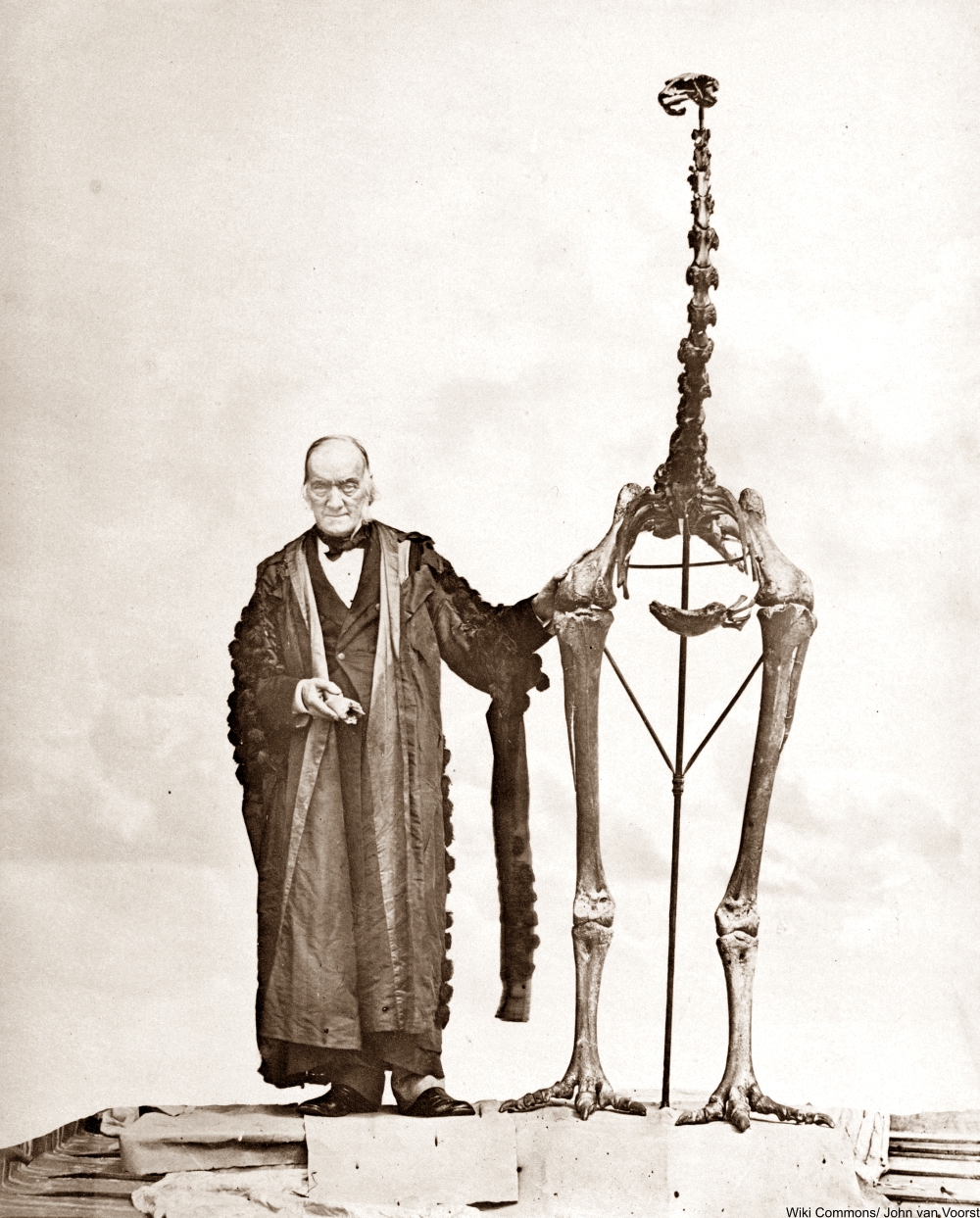 Owen in 1879 with a skeleton of the extinct moa bird, the Dinornis maximus. Via/ Wiki Commons

Owen’s plans to build a museum in Central Park were literally smashed along with his models, but his name lives on as one of the pioneers of modern science and public learning. The infamous corruption and scandal of William “Boss” Tweed put a halt to the museum, and the models destroyed. And Owen went back to England to campaign for a separate museum of natural history in London, which was successful and opened in 1881, with Owen serving as it first director and making it possible for future generations to learn about all manner of creatures, including his famous dinosaurs.

If you loved this then click here to learn about unexpected inventions that changed the world!