How Much Is The Queen’s Coronation Crown Worth?

When a British monarch first takes the throne, they wear the St. Edwards Crown during the coronation ceremony. The crown, along with scepters, robes and other ceremonial items can be found in the Tower of London, where they have been housed for hundreds of years.

The coronation crown weighs almost 5 pounds and is made of gold, velvet, ermine and a wide variety of gemstones. During the first three centuries that the crown existed, the gemstones were only out on loan and set in the crown temporarily. They would be returned after the coronation ceremony ended. In 1911, the monarchy decided to purchase a permanent collection of gems for the crown before Elizabeth II’s grandfather, George V was coordinated.

The crown includes sapphires, topaz, amethysts, and a wide variety of other gems so you can only imagine that it would be worth a pretty penny. In fact, it is difficult to put an exact price on the crown, because there is more than just the price of the jewels, those crown jewels are also historically important. When all things are considered, however, the St. Edwards Crown and all of the gemstones are estimated to be worth over $3.5 billion. In order to get a more exact figure, a gem valuer would have to remove each gem from the crown to inspect it properly.

There are some resources that can help to form more of a guess as to what the crown jewels may be worth. Dr. Roger Harding’s book The Crown Jewels provides some assistance along with the International Gem Societies gem size guide, the catalog of the Queen’s fabric supplier, and several other reference materials.

CashNetUSA’s blog SavingSpot deconstructed the St. Edwards Crown virtually and estimated the value of each part to come up with the price that is likely fairly close. 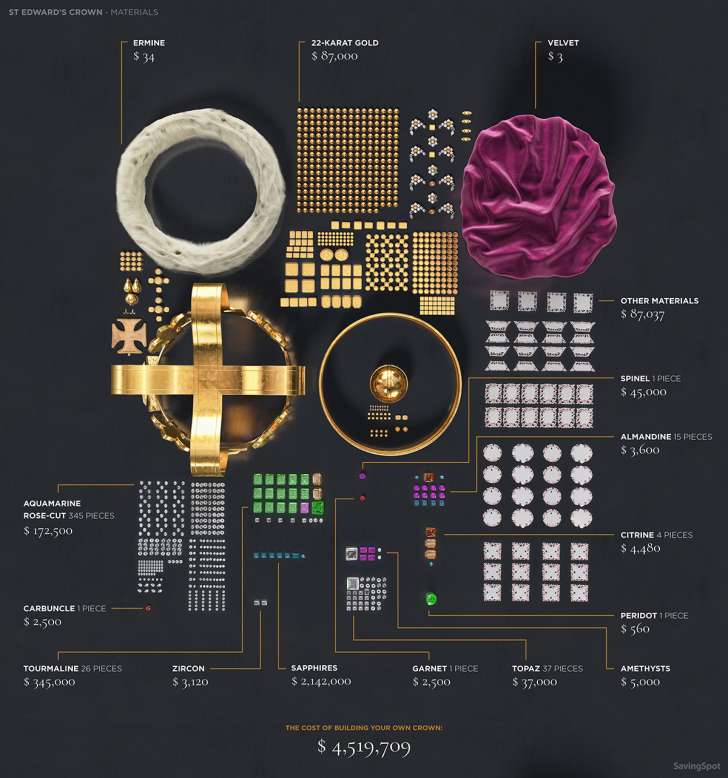 According to their estimates, the crown weighs in at a price of $4,519,709. The sapphires make up the most expensive part at a total of $2,142,000 and the 26 tourmaline stones cost an additional $345,000. The majority of the weight of the crown is in the form of 22-carat gold at a value of $87,000. If those fall out of your price range, you may be able to afford the velvet, which is only worth three dollars. In addition, the ermine ring is only worth about $34.

More information about SavingSpots study is available here for those who are interested.