The Government-Funded “Utopian” Villages of the 1930s

When the Stock Market Crash of 1929 sent waves of financial stress across the U.S. the government devised a number of ways to help the American population cope. They offered assistance with food, jobs, and a variety of programs to teach people how to do more with less money and fewer resources. The passage of the New Deal ushered in the era of the Farm Security Administration, along with the Works Progress Administration, and the Federal Art Project. But, housing was on the agenda, too, and a misguided attempt at utopian villages was attempted in 3 states. 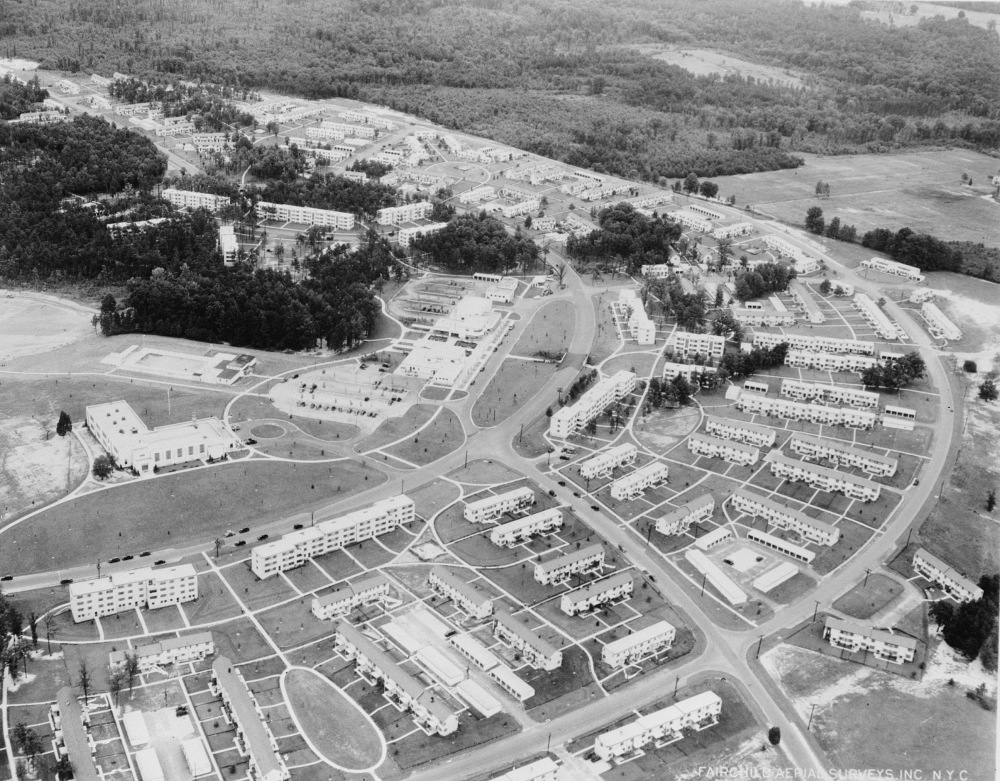 Greenbelt, Maryland, as seen from above in 1939. Via/ Library of Congress

The Resettlement Administration was supposed to build hundreds of utopian towns across America. These ideal communities were intended to be centers of suburban bliss. But, they proved to be expensive and fraught with controversy, which delayed funding and ultimately cancelled most of the planned greenbelt towns.

In the end only 3 of these ideal communities were built: Greenhills, Ohio, Greendale, Wisconsin, and Greenbelt, Maryland. These so-called greenbelt towns were supposed to bring the best of both farm and city life together in affordable housing projects that offered a completely different model of living than the low-income tenement housing of cities or the hard-scrabble, make-do life of farming families. 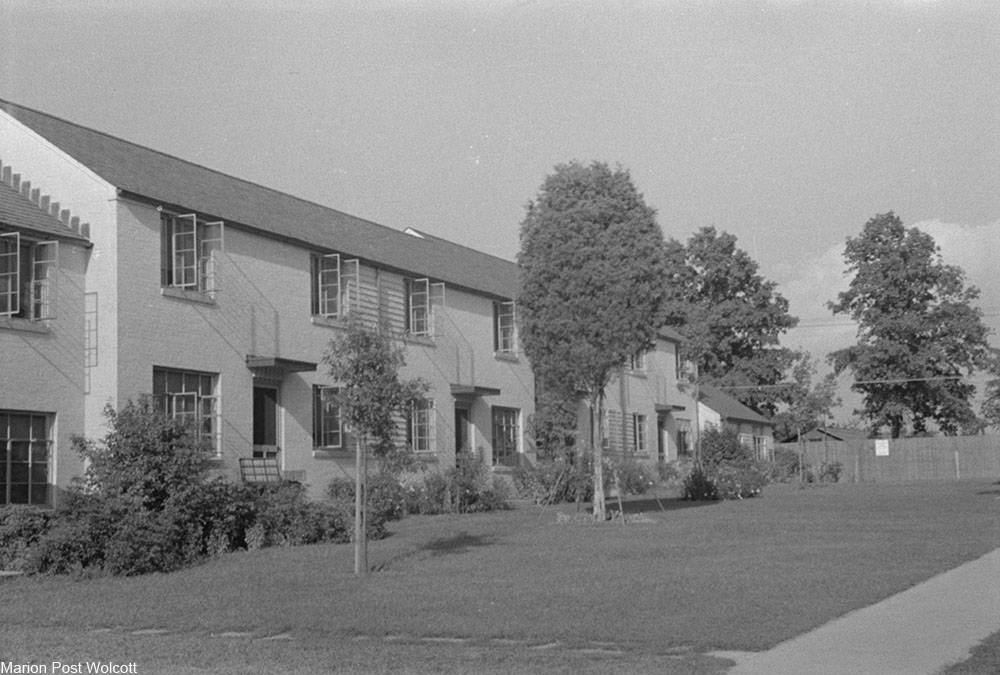 Housing at Greenbelt, Maryland. Via/ Library of Congress 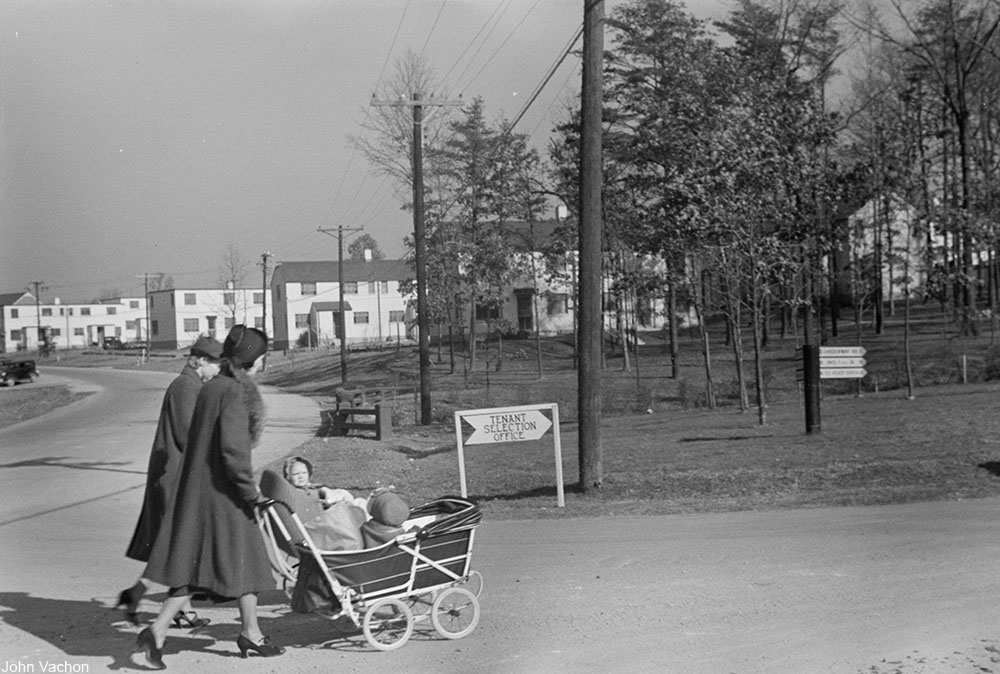 Two women approaching the tenant selection office at Greenbelt, Maryland, in 1937. Via/ Library of Congress

Like other housing projects that would come after them, these towns had built-in amenities like communal playgrounds and pools, but they also sponsored a number of cooperative programs that relied on the participation of residents to function. To that end those who applied to live in these utopian villages were screened for their willingness to engage in the community and in various projects before they could be approved to move in.

Would-be residents were also screened for income. Looking to populate these utopias with moderate-income families, the guidelines to live at Greendale in Wisconsin were that a family had to earn between $1,200 and $2,700 per year.

The homes were intended as affordable housing for the working class. The communities were supposed to get free enrichment through the free labor of coop members in what was test of how to imporve upon existing towns. 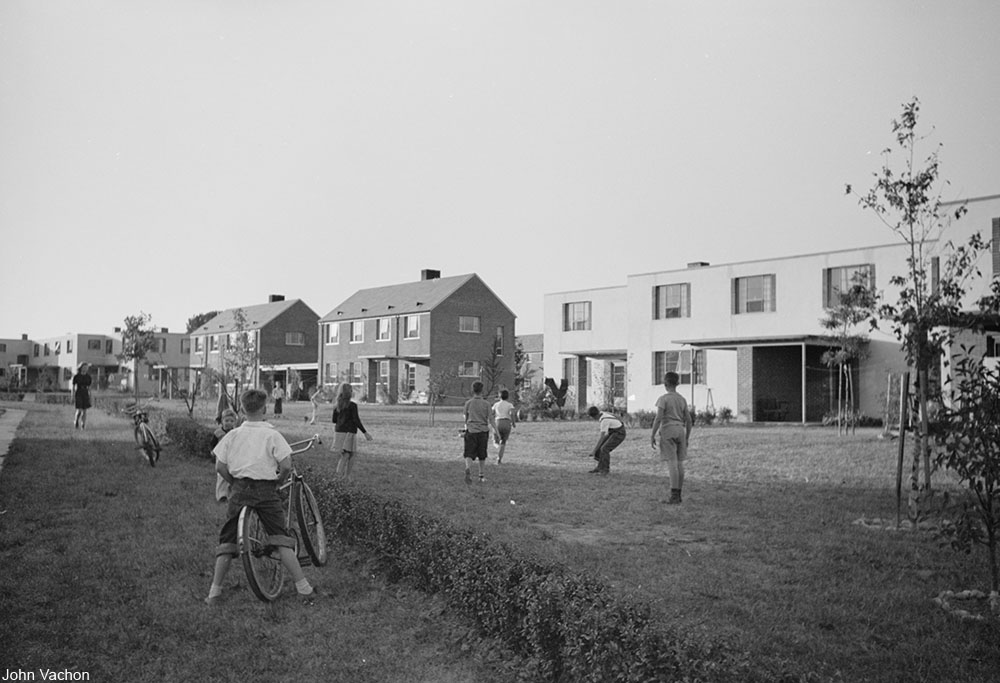 Kids play in Greenhills, Ohio, 1939. Via/ Library of Congress 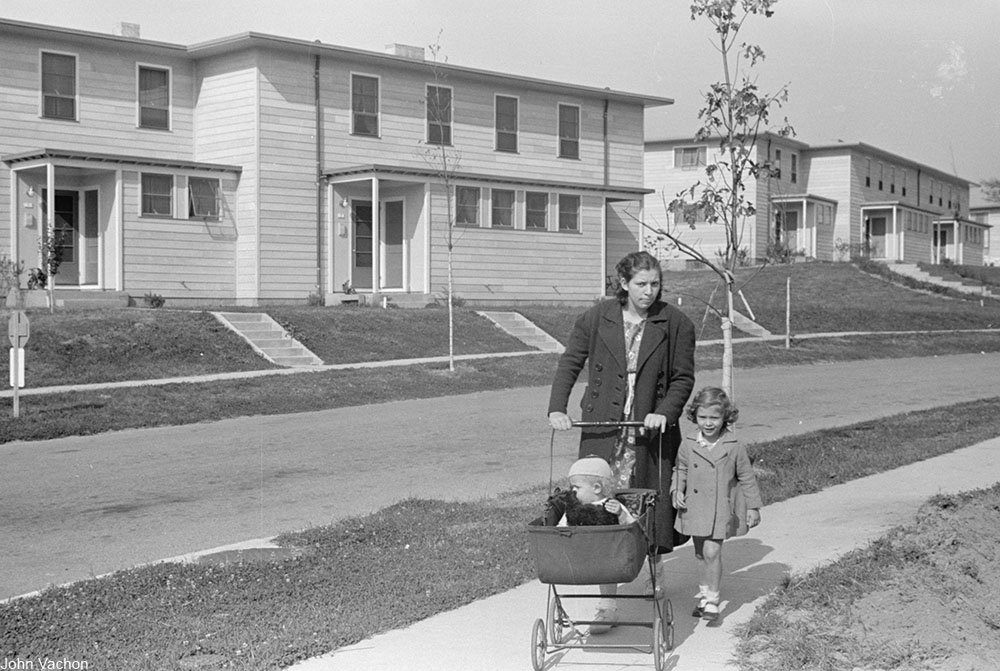 Taking children for a walk in Greenhills, 1938. Via/ Library of Congress

Unlike crowded apartment blocks, the greenbelt homes were often duplexes, ranch houses, or spacious apartment homes. Many of these buildings were 1-2 stories tall, making them feel perhaps slightly more like homes one might buy rather than government-funded housing projects.

And, make no mistake, during this era plenty of those dense and soulless housing projects were constructed. The immense need for affordable housing, safe facilities, and some sort of safety net during the Great Depression was sorely needed.

The difference with the greenbelt towns was that they were designed, thought out, and offered a social experiment in communal living that was absent from the more “standard” housing projects around the the U.S. The 3 greenbelt communities, named for the forests and farms that surrounded them, were the last to be built. Funding for the construction of the other greenbelt towns was delayed or denied by elected officials in protest of what some saw as the invasion of the U.S. government with communist ideas. 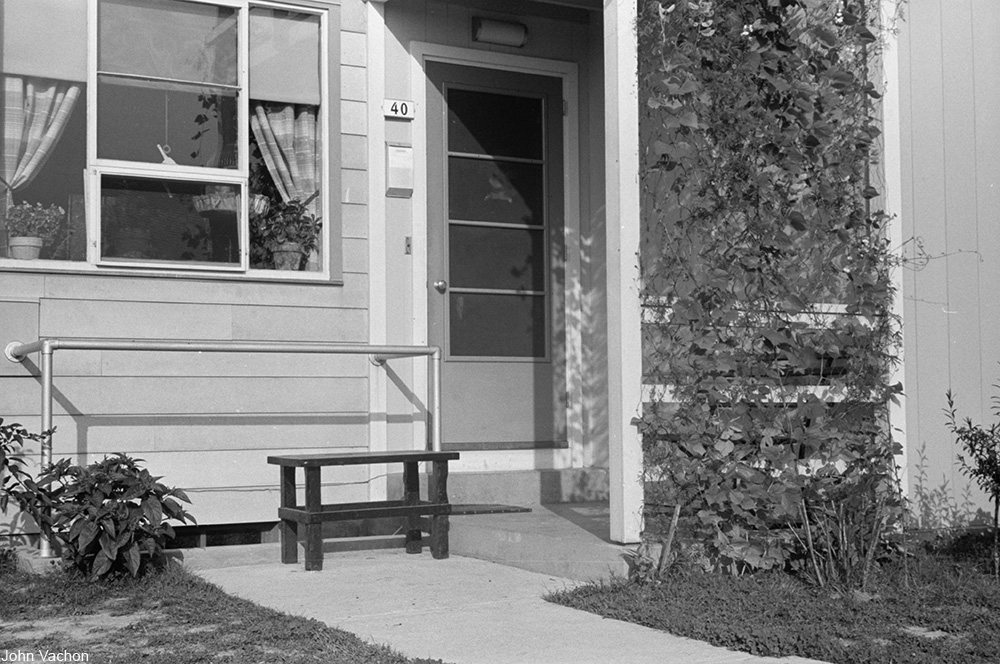 Front porch in Greenhills, 1938. Via/ Library of Congress 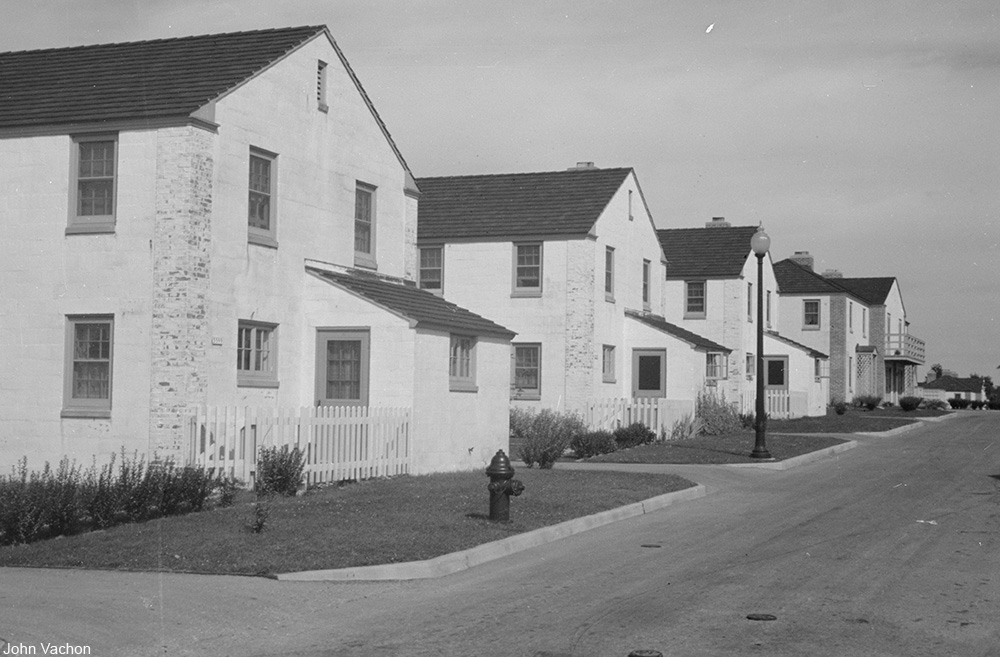 Rows of identical houses in Greendale, Wisconsin, 1939. Via/ Library of Congress

Within only a few decades the housing needs of Americans had made these utopian villages no longer as desirable. Some were divided by new highways, while others were sectioned off and sold to housing developers who intended to cash in on the desire for “a home of one’s own” in the style of the day.

After World War II the housing market changed drastically, with post-war jobs paying veterans very well. This prosperity greatly influenced what kinds of housing families wanted during this era, and it wasn’t the government housing that the greenbelt homes had to offer. But, there is no question that many of the concepts at play in the greenbelt towns -like nearby amenities, the arrangement of buildings and streets, and the rural-meets-town locations- were influences on how later suburbs were designed and built. 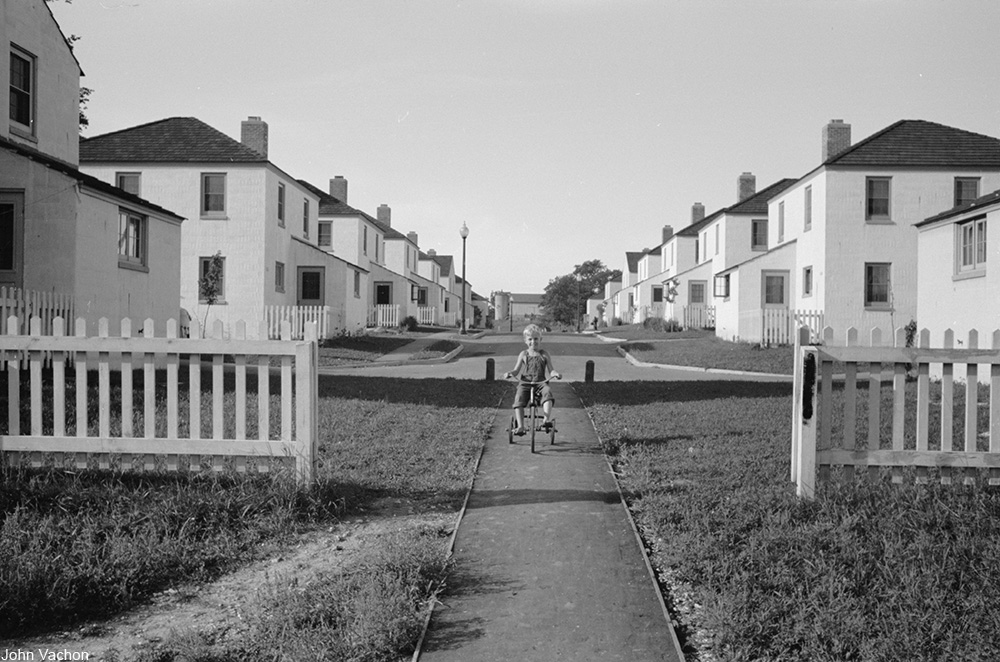 A sidewalk view of the symmetry of Greendale. Via/ Library of Congress 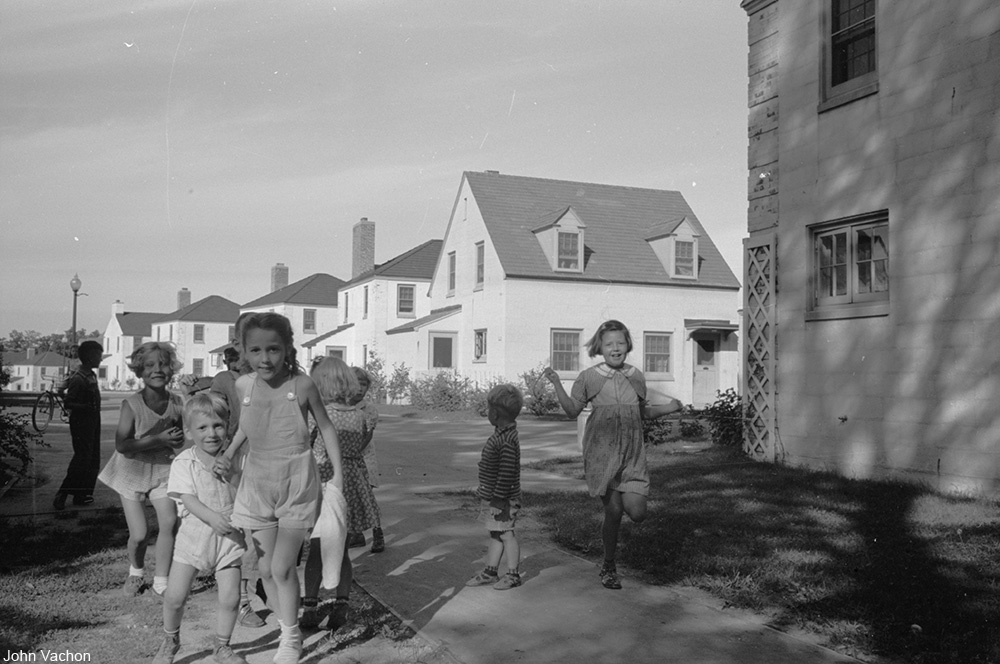 Children playing in Greendale. Via/ Library of Congress

Sadly, like the first official planned suburbs that were built later on, these social experiment utopian towns were segregated and functionally open to white families only. A planned section of segregated housing for black tenants at Greenbelt was later cut from the project because it was too controversial for Maryland to have black and white neighbors so close together.

Some of the greenbelt buildings are still being used today, a testament to the broad scope of projects that the New Deal brought to fruition. Unfortunately in this case, the ideals of the “utopian” communities fell far short of their lofty goals.