World’s “Most Stolen Painting” Restored Centuries After It Was Made

Some paintings have been around for centuries and that is the case with The Adoration of the Mystic Lamb, a painting that most people know as the Ghent Altarpiece. It was completed in 1432 and since that time, it has been through the wringer.

Hubert and Jan van Eyck are brothers who painted the masterpiece for St. Bravo’s Cathedral in Ghent, Belgium. It remained in the cathedral until it was eventually taken apart and some of it was stolen by a vicar. After rioting Calvinists almost destroyed the painting by fire, it was eventually stolen by Napoleon’s troops.

A museum in Berlin became home to the painting during the first world war and it eventually was returned to Ghent as part of the Treaty of Versailles. It wasn’t long after it returned that it was stolen again in 1934 and held for ransom. That part of the painting was never returned and then during World War II, Hitler decided he wanted the painting.

After the Nazis occupied a castle in the south of France they obtained the painting after the Belgians had attempted to hide it in the castle. The painting was then stored by Hitler in the Altaussee along with other works, including Vermeer’s The Astronomer and Michelangelo’s Madonna of Bruges. As World War II was coming to a close, the salt mine was set to be blown up but the mine administration in the local area and the miners stopped it from happening. At that point, the Monuments Men seized those artworks, including the Ghent Altarpiece. 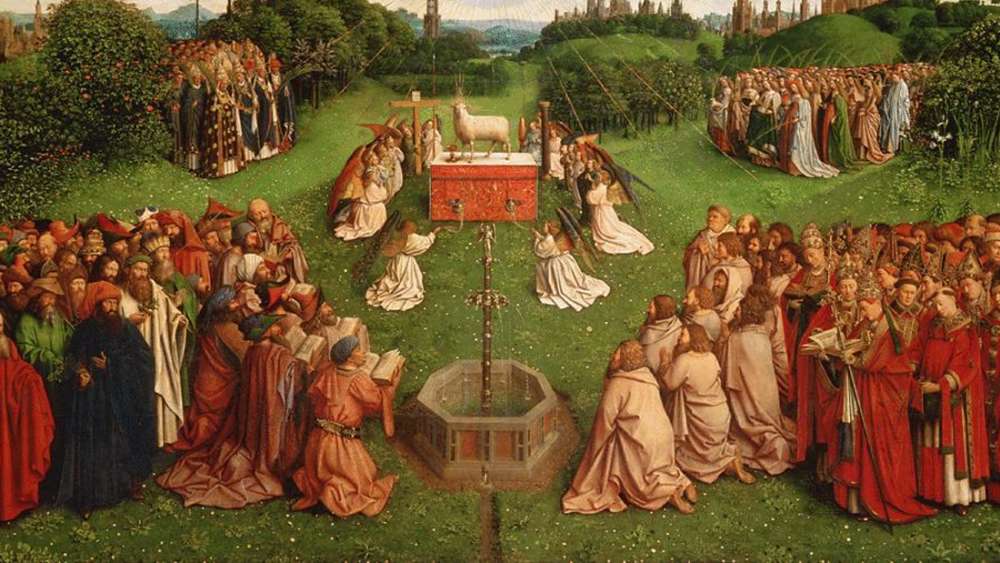 It didn’t happen all at once but eventually, the artwork was known as the most stolen painting in history. Obviously, this painting has been through a lot over the years.

A sheep on an altar surrounded by worshipers is the focus of the painting. Ever since 2012, the painting has been going through a restoration in a specialized laboratory. X-ray fluorescence scans were used to determine that the lamb had already been painted over during the 16th century.

The Art Newspaper reported that Hélène Dubois, the head of the restoration project said: “This overpainting had been done so early on, and following the shapes of the original, with very similar pigments that had also aged in a similar way, that it was not actually visible on the technical documentation when the altarpiece first came in for treatment.”

Experts were able to remove the 16th-century addition and restore the painting to how it appeared in 1432. It doesn’t seem as if the lamb is very happy about it.

Uh, so apparently they restored the Ghent Altarpiece and pic.twitter.com/JljwfEZlzu

Underneath the 16th-century paint is a very human-looking, intense sheep. The Internet seems to understand why people would worship the sheep, especially with looks such as those.

Honestly it’s growing on me now. I can’t see the old lamb anymore. All I see is New Lamb. All the time. And He sees me… He sees all. 10/10 would fall down and worship

the lamb of the ghent altarpiece was a mistake and whoever painted over it was right to do so https://t.co/omRu9ieCfn

Researchers are looking into why the van Eyck brothers decided that a cartoonish sheep with a humanlike face was chosen, considering the naturalistic style of the overall painting.

That being said, it looks like a new meme is born.