The Reason Why Medieval Castle Built Their Staircases Clockwise

There is an entire culture built around medieval castles and we often see them in movies, on television and we read about them in books. Inevitably, there is going to be a battle scene that involves soldiers storming the castle and running up the staircase, typically with an ongoing stair fight. In the shows, the staircases are not always built in a clockwise direction but that isn’t the case in real life.

Nerdist wrote something interesting about the way those medieval staircases were built. They said that the staircases were often constructed in a clockwise manner so that any enemies climbing them would be at a disadvantage. Most soldiers were right-handed, so the interior wall would inhibit any of their swings. Before striking, they would have to fully round the corner so they would be exposed before they could attack.

Not only did the clockwise direction hamper the attackers, but it also worked well for the defenders. As they were going down the stairs, they could swing their swords in an arc that was similar to the outer wall and the inner wall would act as a shield. Since the stairs were typically wider at the outer wall, it provided more room for the swing of the defender. 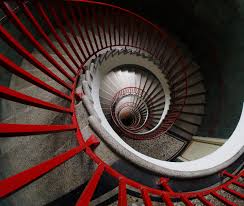 Perhaps that is why you should consider taking as many left-handed soldiers with you as you could when attacking a medieval castle. On the other hand, if you happen to own one of those castles, keep any lefties in the tower to defend those who are fighting on the stairs.

Will Kalif owns the All Things Medieval blog and explains that the stairs themselves also provided an advantage to those protecting the castle. The individual steps were not designed exactly the same so you would likely have an uneven staircase. It wouldn’t be a problem for the defenders who were used to the inconsistencies but the attackers would have a problem with tripping over the uneven staircase. In addition, it’s always easier to go down the stairs than it is to go up.