6 Old Things… Can You Identify Them All?

One of the great things about antiques is that they help us realize just how much some things have changed. Some everyday-items from the past have become completely irrelevant, while others have changed dramatically. We’ve found 18 old items that have either gone the way of the dodo or have drastically changed since their heyday. Scroll down to see the first set of items, then click the next button to find the answer. See how many you can correctly identify, and leave your score in the comments below! 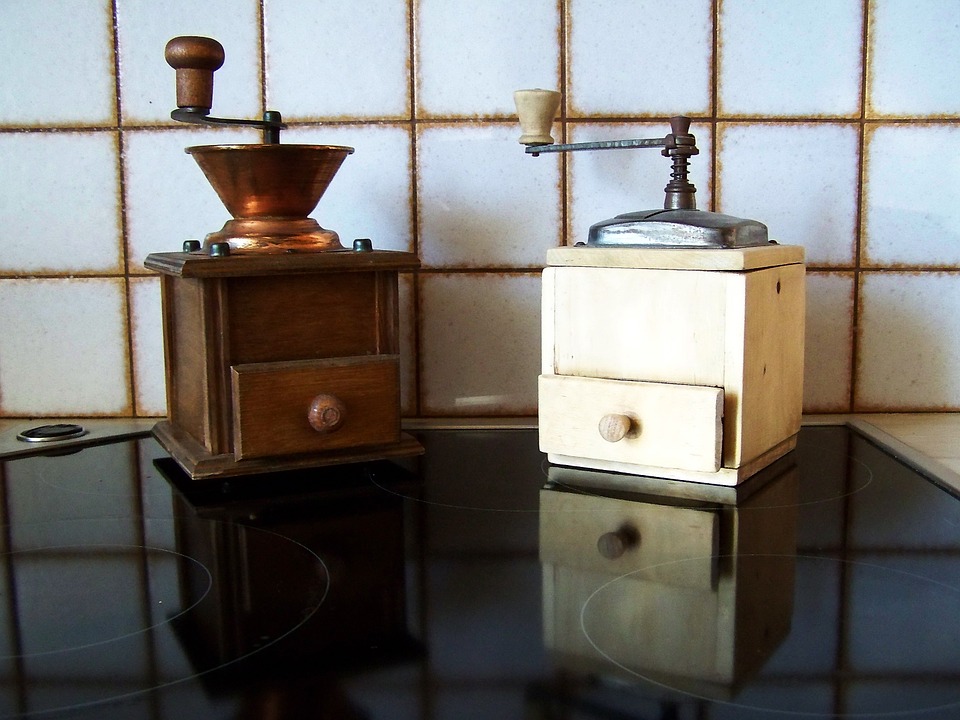 We’ll start off with an easier one. This was a necessity for those early mornings. 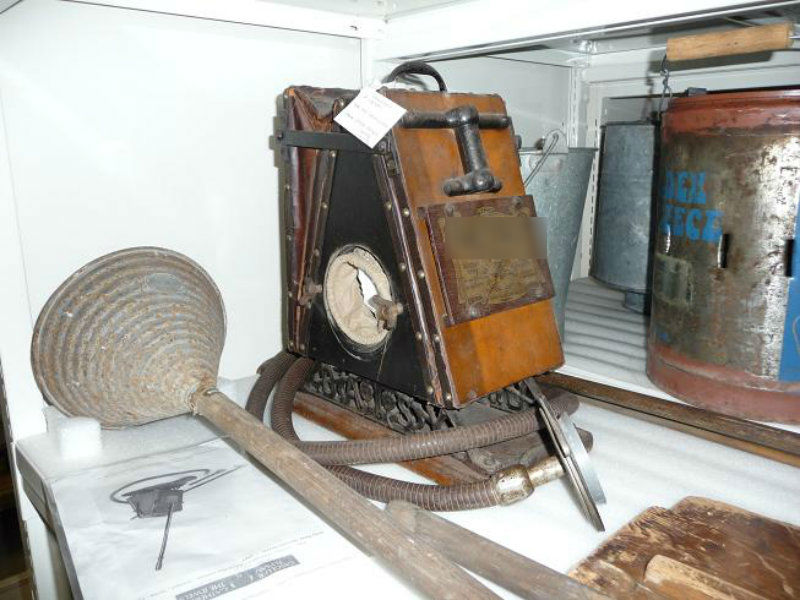 Here’s one that many of us still use, but they sure have changed! One of the more divisive of the household chores, we can’t imagine having to lug this thing around.

If you guessed coffee grinder and vacuum cleaner, you’re correct! Back before you could find a Starbucks on every corner, coffee beans were sold whole, and you’d have to hand crank them before you could make your morning cup of joe. I don’t think I could handle that much activity before my first cup of coffee.

The vacuum model pictured is the Baby Daisy. Designed in France and dating back to 1910, the baby daisy was a manually-powered vacuum and required two people to operate it; one person standing on the base of the vacuum while moving it back and forth, using a broomstick in the holder on the front, while the second person would do the actual vacuuming with the hose. 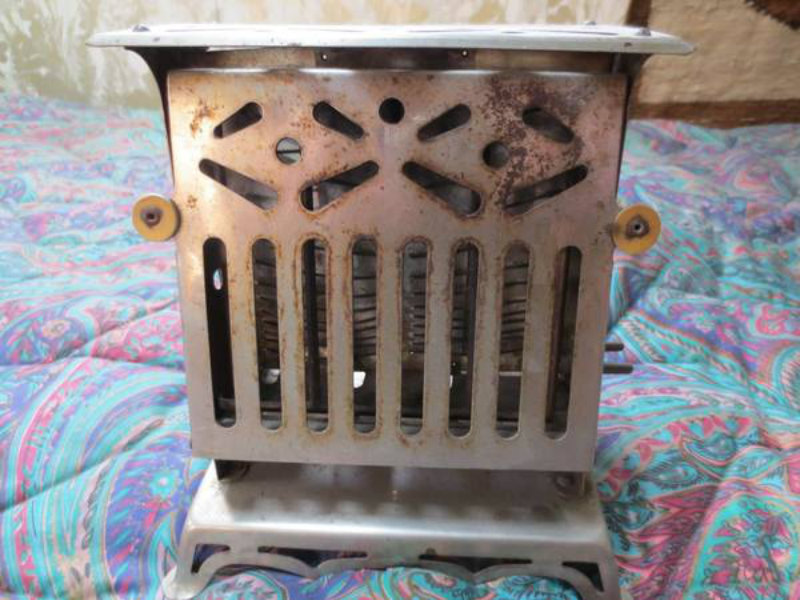 Back to the kitchen for number 3, which is also still around. If you can’t tell from the photo below, here’s a hint: this would go well with the coffee grinder from number one. 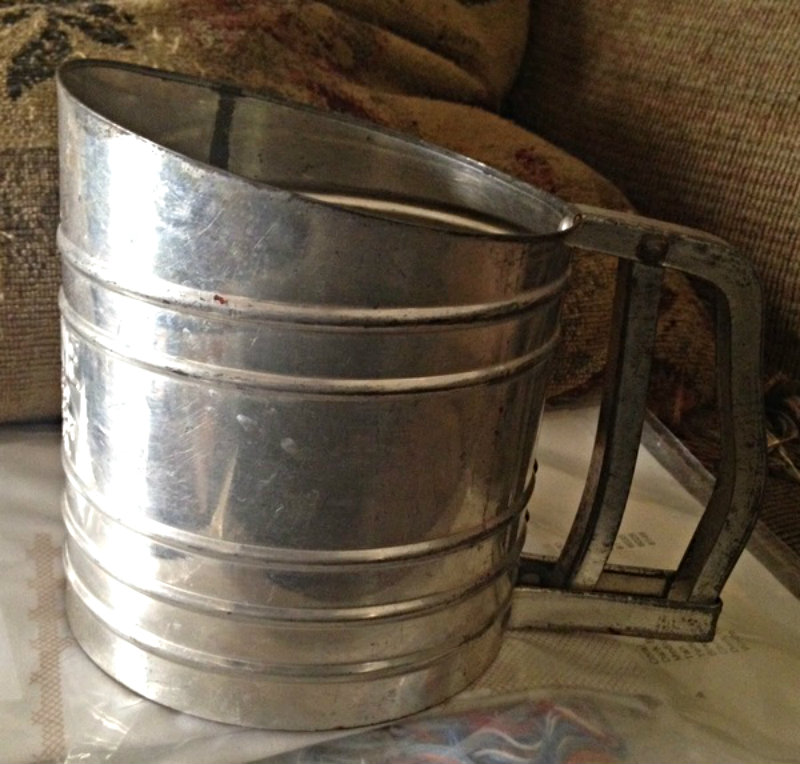 You might not see this in as many kitchens as you used to, unless that kitchen belongs to a baker. However, they do still make new versions of this baking utensil, and the technology really hasn’t changed much (things have just gotten a little bit more shiny).

If you said toaster and flour sifter, you’re correct! Yes, the best thing since sliced bread…err, the best thing to happen to sliced bread? Either way, toasters as we know them began to pop up when Albert Marsh developed a way to use a safe heating element in a toaster in the early 20th century. Before that, people used to toast their bread by fire!

While flour is still sold in relatively large sacks, back in the day the containers were even larger than they are now! All of that flour would eventually become packed pretty tightly. Running flour through the sifter would help aerate it, making it lighter and easier to mix; perfect for making bread for that fancy toaster! 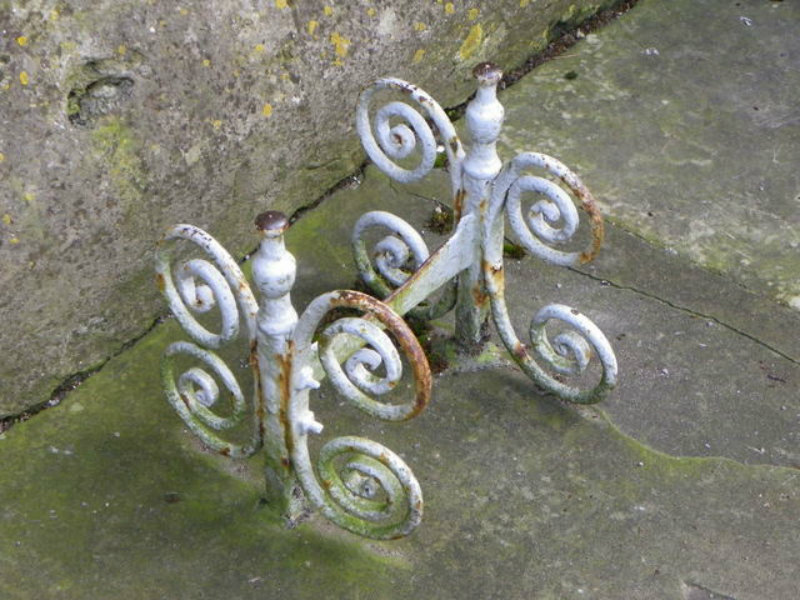 Here’s one that’s simple, straight-forward, and really only serves one purpose. You’d often see it installed by the front door. And while they’re not all this fancy, they’re definitely quite efficient. 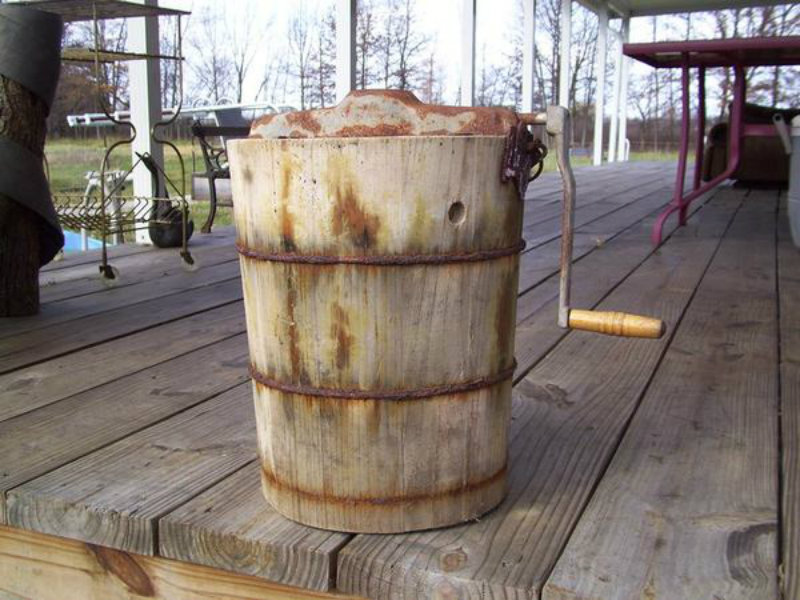 OK, so this one might not be an everyday-item, but we wish it was! Many of us probably did something similar to what this contraption does in our science classes growing up. Need another hint? It was perfect for a hot summer day.

If you said boot scraper and ice cream maker, you’re right! Boot scrapers were used to do exactly what their name implies: scrape the excess mud and dirt off the bottom of your shoes before coming inside. We’ve already seen how cumbersome vacuums used to be, and no one likes having to bust out the old broom or mop, so it’s no wonder these handy little contraptions were invented. 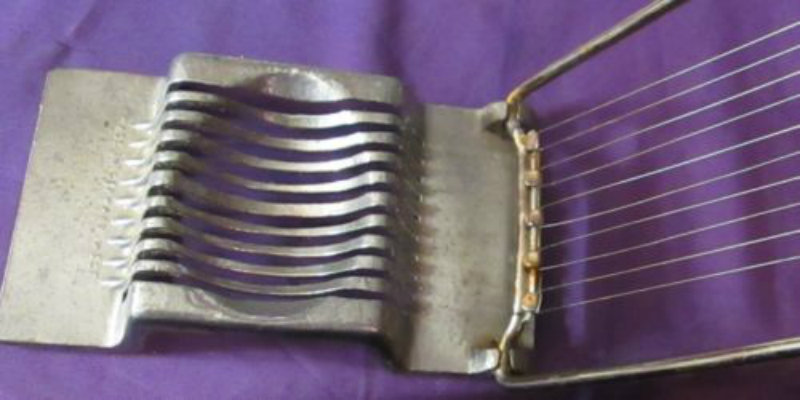 Maybe it’s just us, but this is the one out of the entire list that we had the most trouble with. You don’t see them very often, although they are making a comeback thanks to food bloggers finding different, creative uses for them. 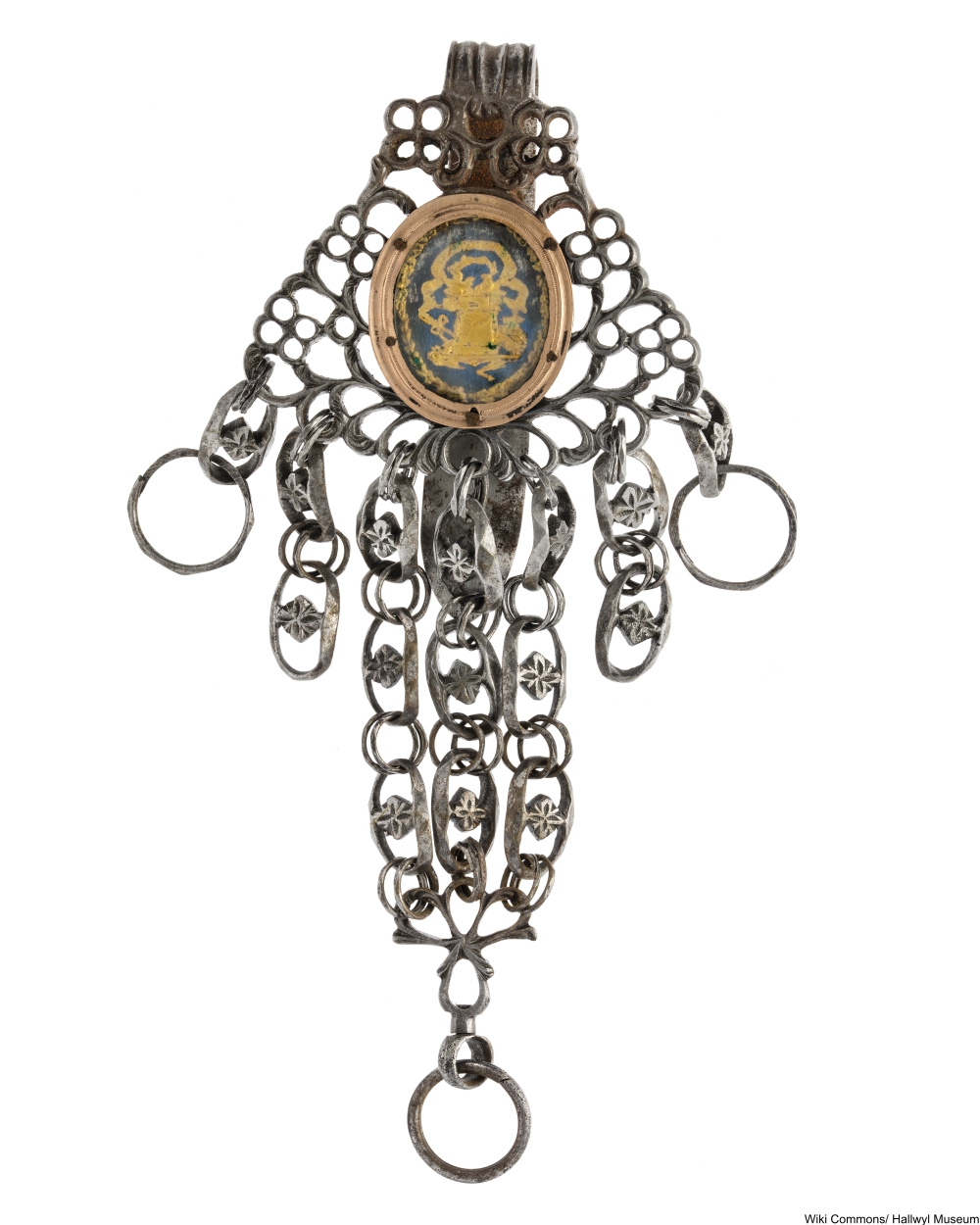 This metal object has several chains coming off of a central loop and the entire piece is highly decorated. What is it?

If you said egg slicer and chatelaine , then bravo! The egg slicer has been around since its invention in the early 20th century. These days, people use egg slicers for just about anything: cheese, fruits, vegetables, you name it!

During the 18th and 19th centuries, chatelaines were used to keep one’s tools at hand. A housewife might keep her sewing equipment from the chains, a businessman his pocket watch and knife, or a housekeeper her many keys. 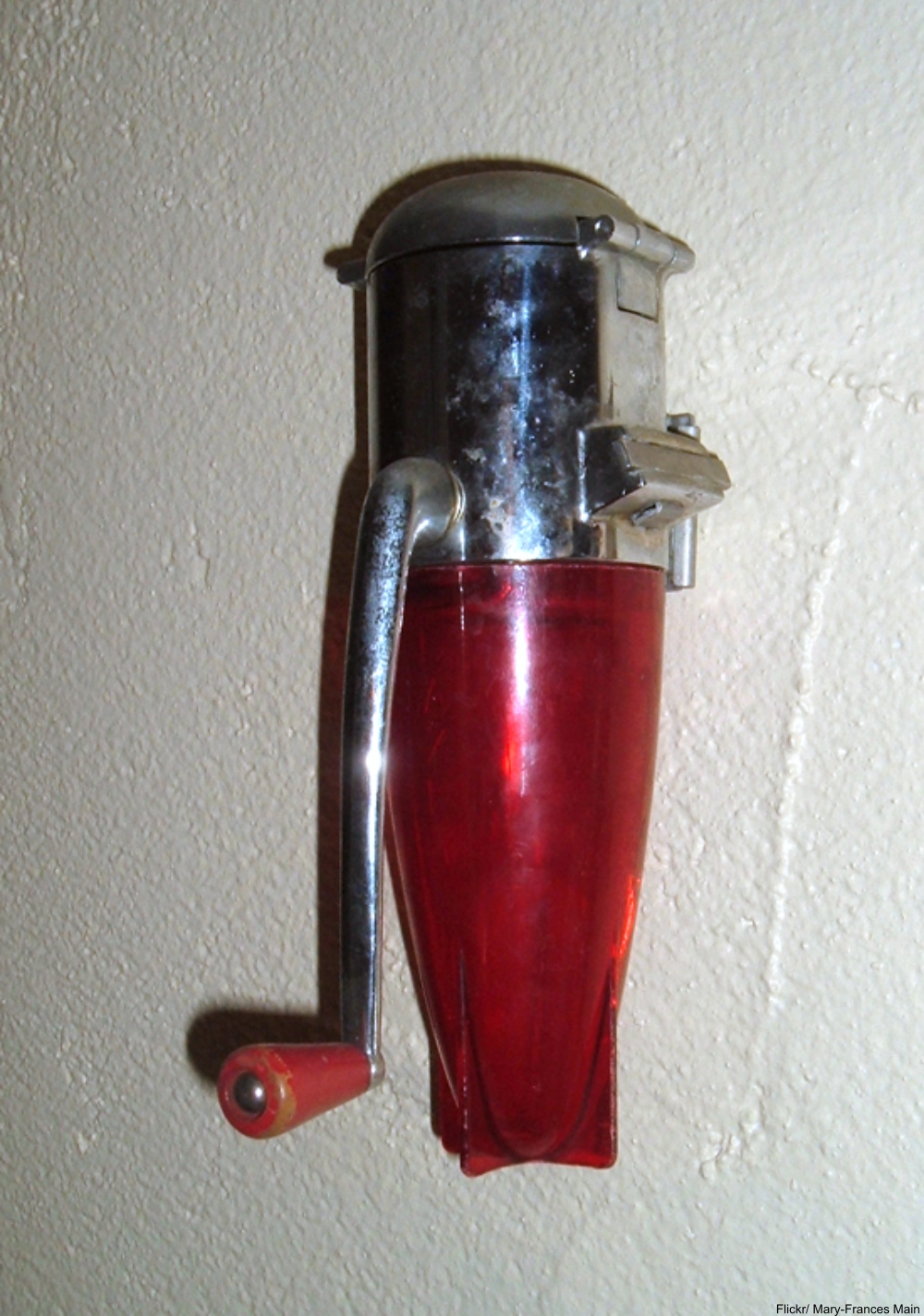 This tool is chrome on top and red plastic on the bottom with a crank on the side. The general shape of the piece reminds one of a rocket. 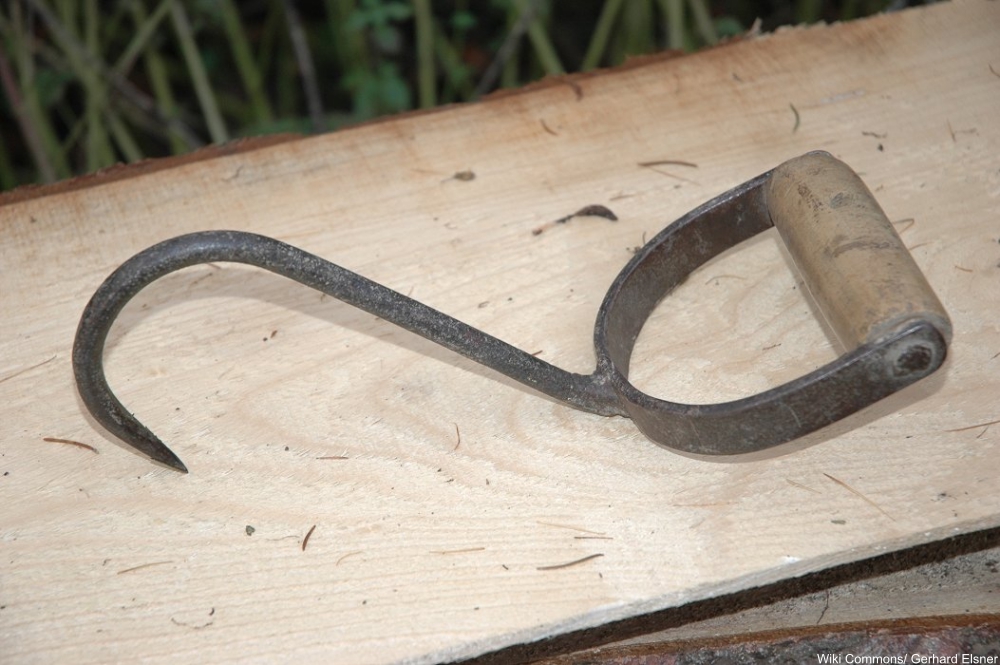 This tool has a wooden handle and an intimidatingly sharp metal hook on the end. Do you have any idea what on earth this object was used for?

Many of you may have recognized this object as an ice crusher and may have memories of your folks using one of these at family events. But, don’t worry, the next one won’t be so easy!

If you thought it was a longshoreman’s hook then you are spot on! While the general idea of the hooks was the same, they were sometimes shaped or sized slightly differently depending on what kind of cargo was being unloaded. 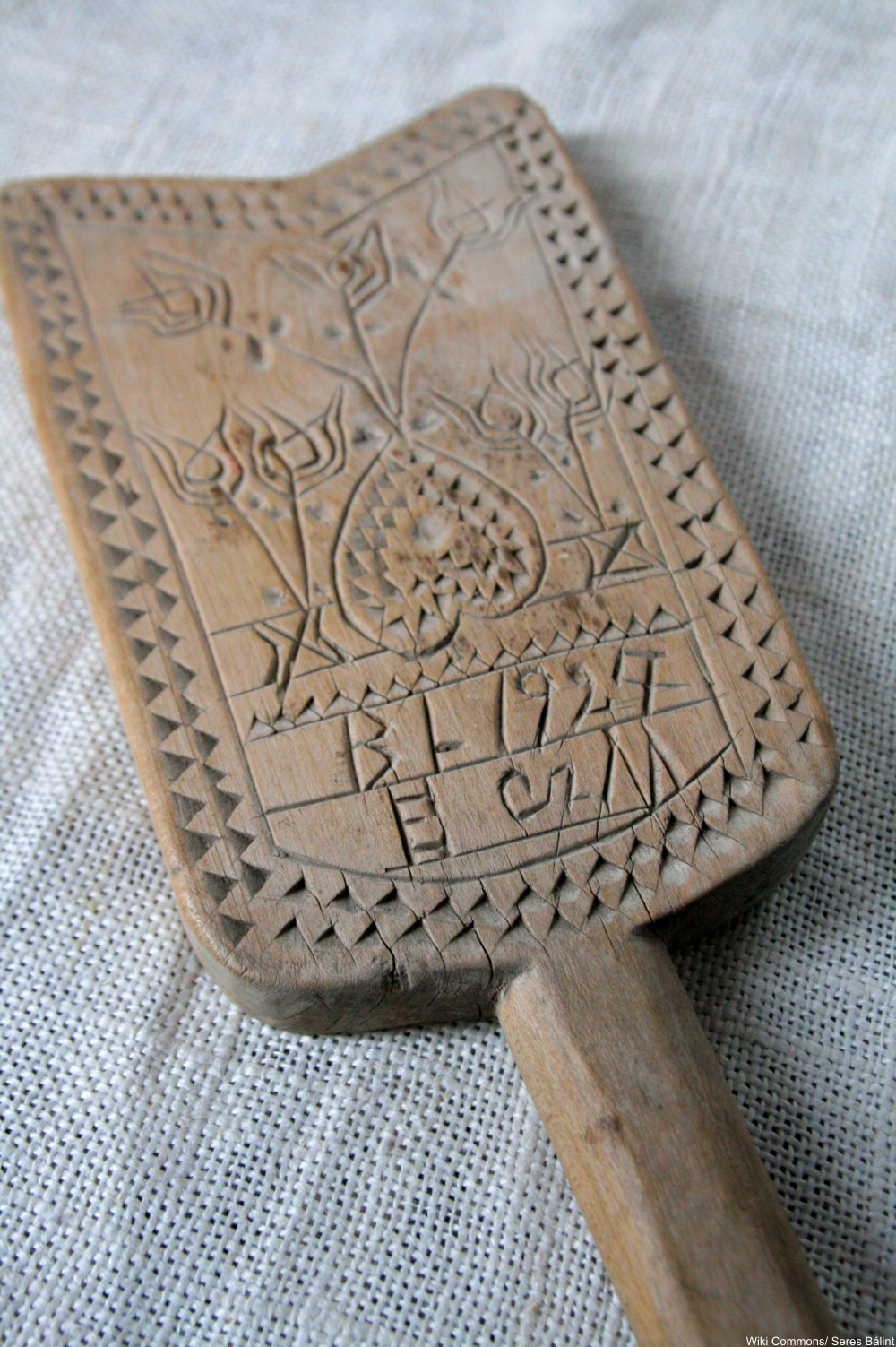 This decorative wooden paddle has lovely carvings all over it and the date 1924 is clearly visible. 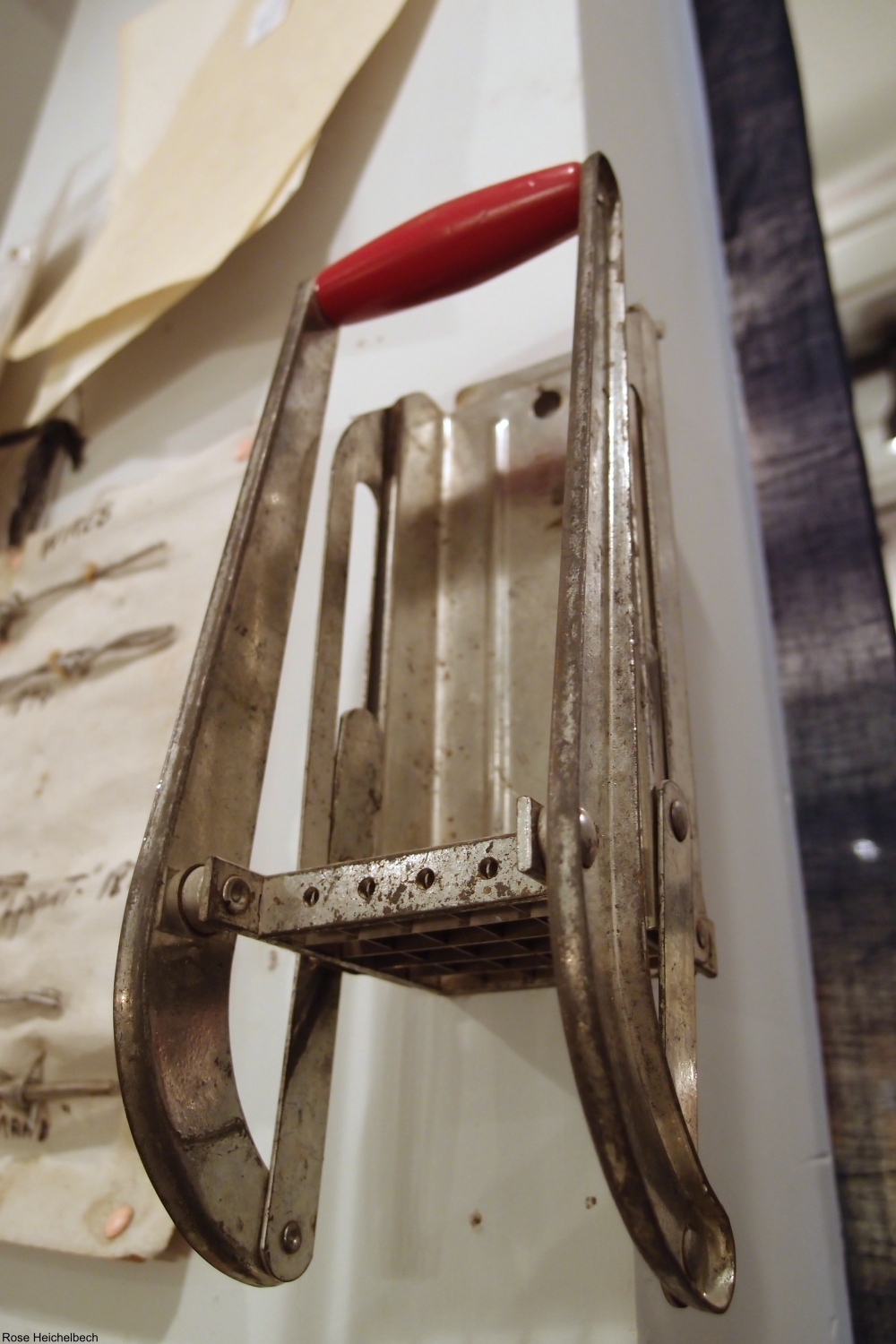 This metal tool has a handle which slides along the length. Also present is a grid on the bottom.

If you had a suspicion that this was an old-fashioned washing paddle then you have a good eye! These paddles were sometime given as gifts to young girls or brides, especially in Europe, which explains why the piece is so lovingly carved. These large paddles would be used to agitate the laundry by hand on wash day.

If you thought the 2nd item was a french fry cutter then you are correct! The grid is what cuts the french fries via the handle action. This would have come in very handy when making even a small batch of fries! And we all know there are few things as yummy as homemade french fries! 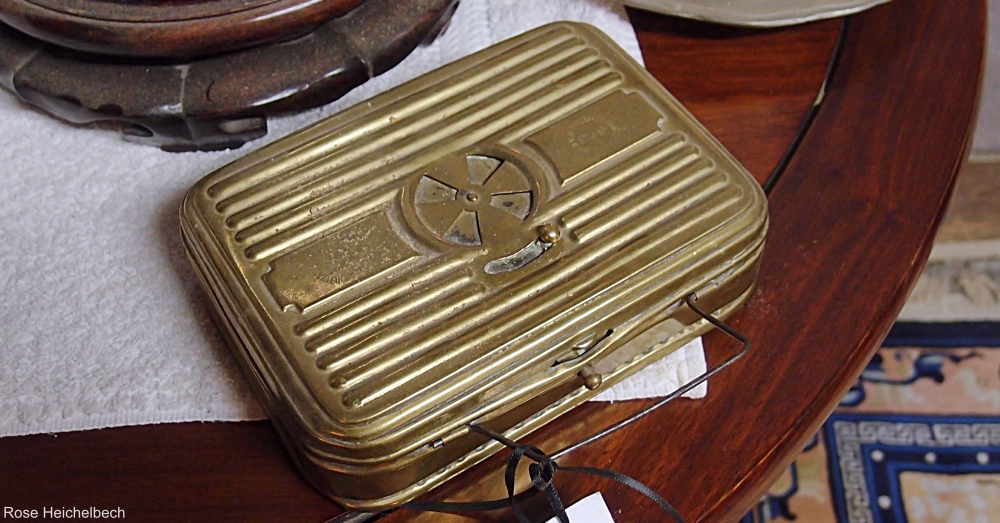 This brass box has a handle on the top and an adjustable vent on the front. 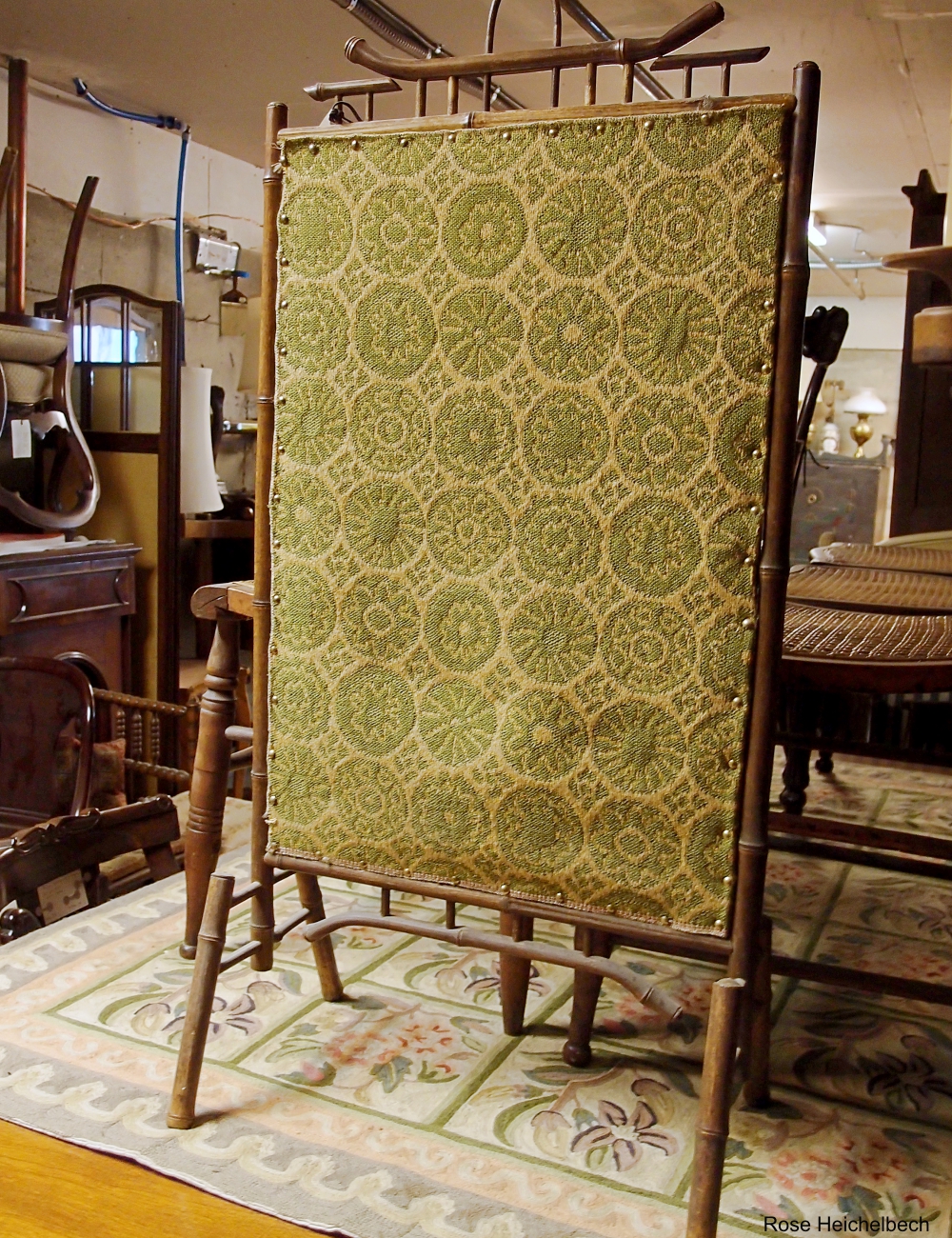 This piece consists of fabric stretched and tacked down on a wooden frame with an ornate design. What is it?

If you guessed that the first one is a foot warmer then you are correct. The small size and handle suggest portability and this would have been used to warm the feet of riders in a carriage. Even early cars needed to have some kind of heat source since heaters weren’t common in automobiles until the 1930s. It wasn’t until 1933 that the first in-dash heater was built by the Ford Motor Company.

If you guessed the 2nd one was a fireplace screen you are right! We don’t see them used much anymore, but way-back-when these were quite the thing to protect women’s cheeks from the harsh heat of a beastly fire. 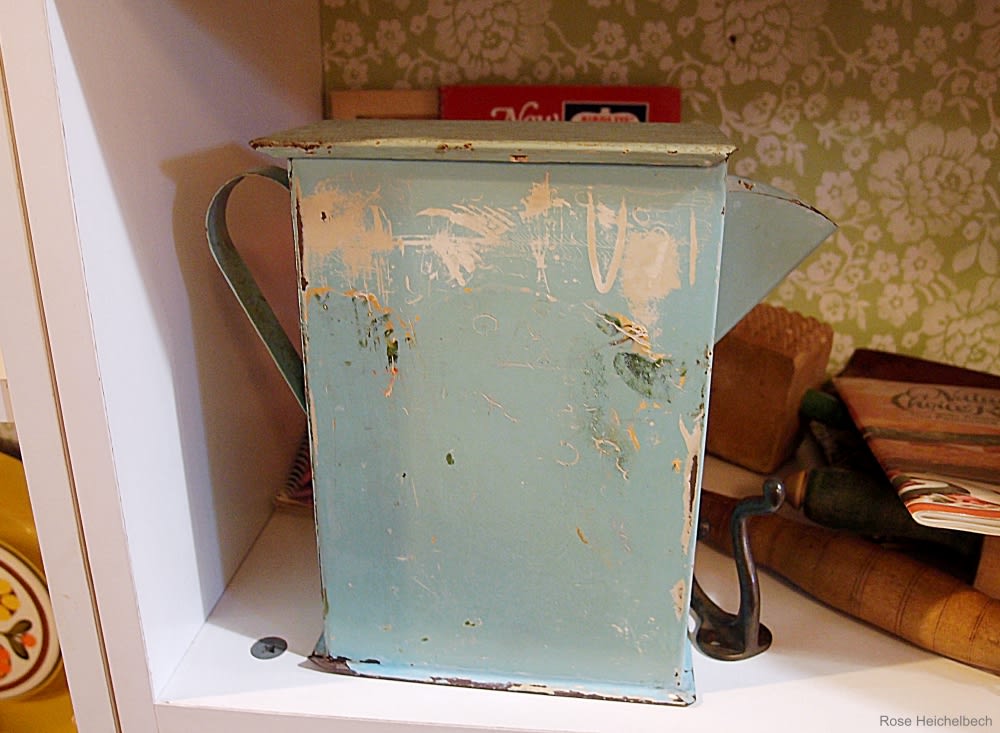 Next up we have a very beat up, aqua blue metal container with a spout on one side. Take your guess! 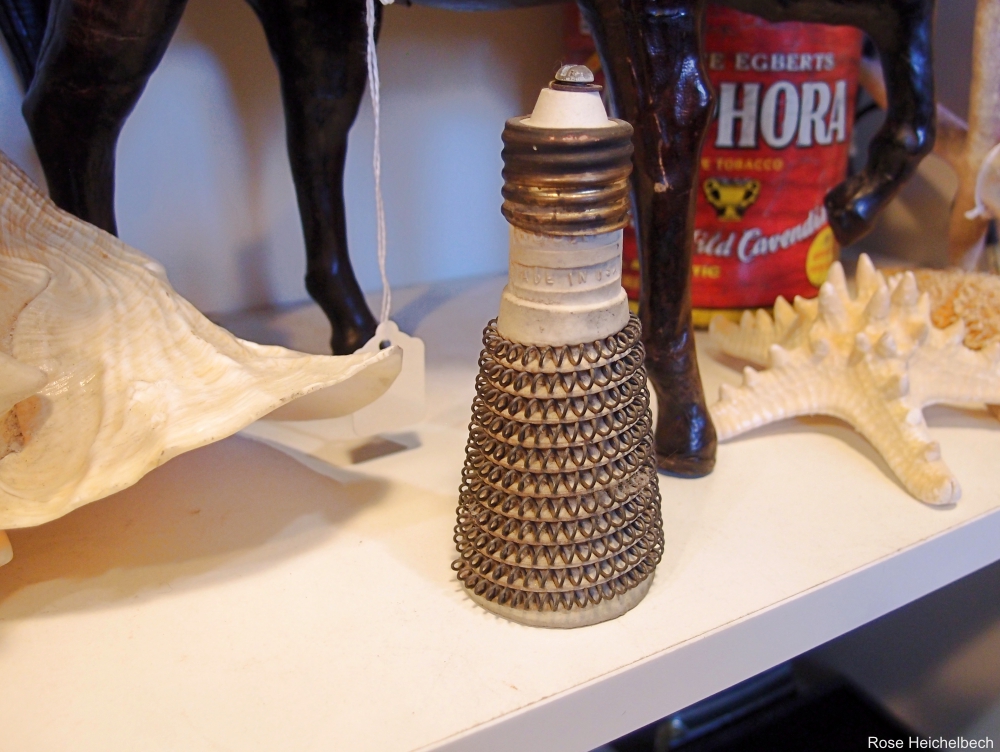 Ceramic and conical, this piece has a screw base similar to a light bulb and has many small metal coils around its outside. What is it?

Your mom may or may not have used one of these. It’s a powdered detergent dispenser from before all our boxes had spouts built in. This perhaps explains why it’s so danged beat up!

This second one is a little obscure. If you guessed heating “bulb” you’ve got it! A cool (or should we say “hot”) vintage item, this heating element uses the metal coils to distribute heat once it’s screwed in. 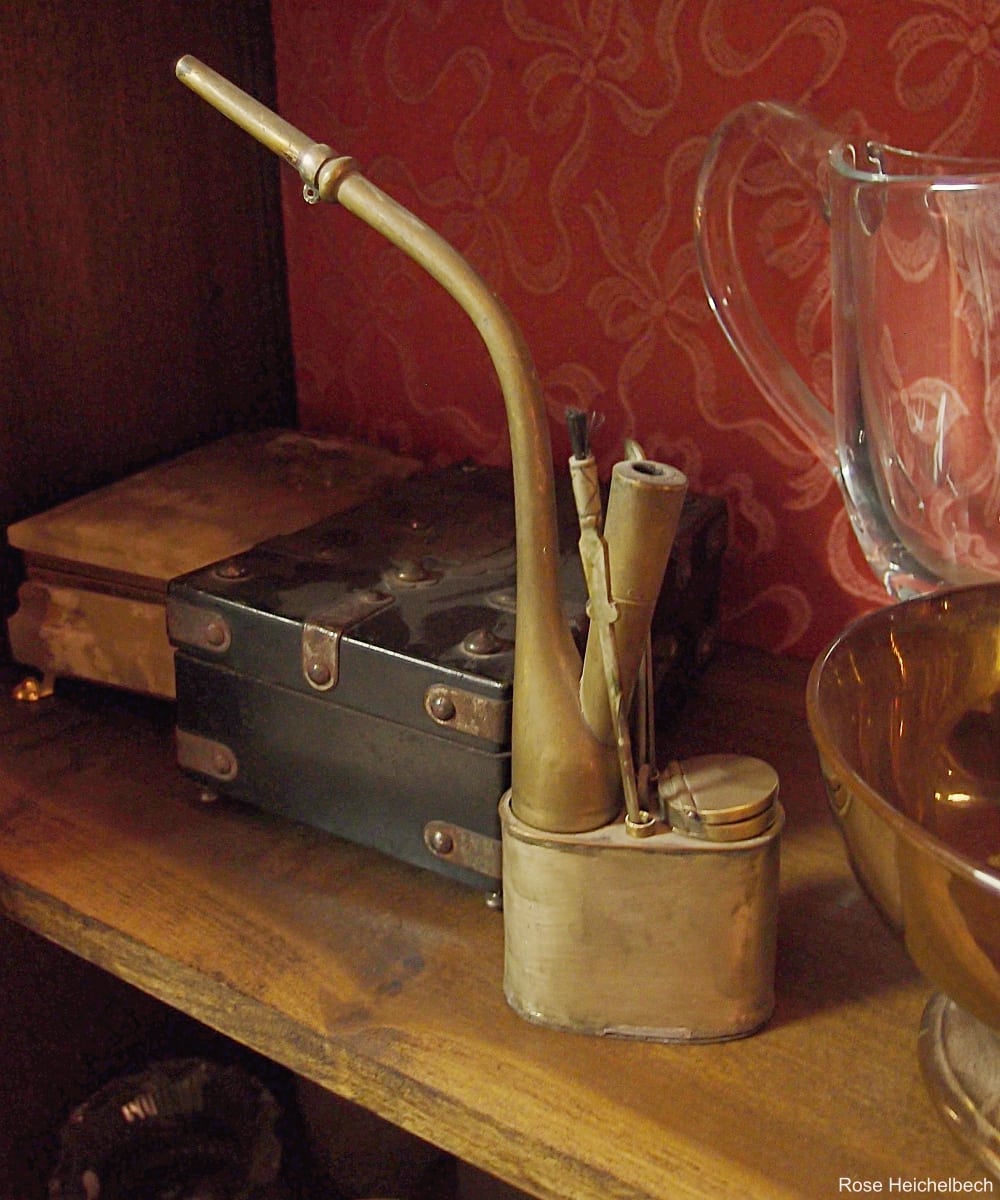 This one is brass with a lidded compartment, a small brush, and a spout. Betcha can’t guess! 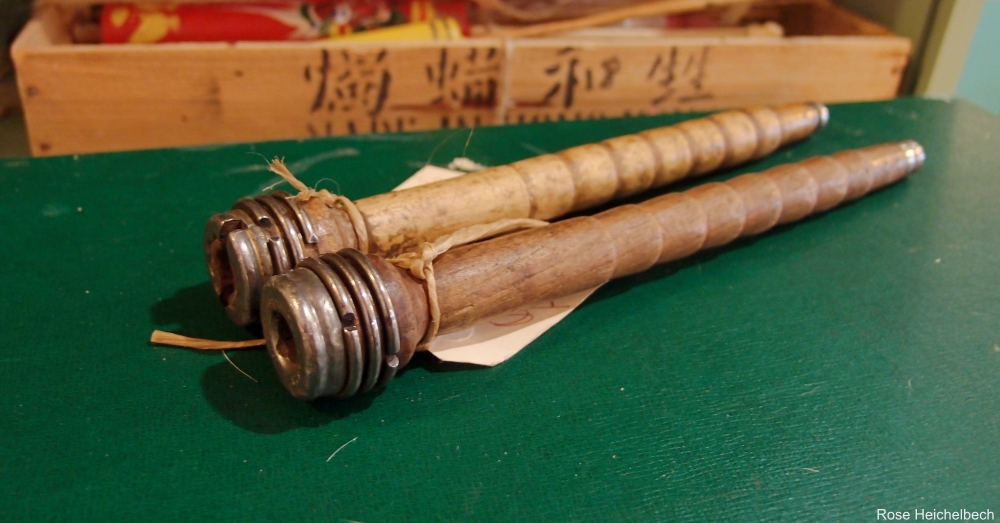 These are stepped-down in size along the length of each object. They have metal caps on the ends as well, with a slot at the top of the larger end. What is it?

If you thought it was a Chinese tobacco pipe then you are spot on! The compartment is for storing the tobacco and it would often came with tweezers or tampers as well for easy loading. The bowl is behind the brush on this one.

Did you guess industrial textile spoolsfor the second one? If so, then you are ahead of the pack! Used to hold the thread that textiles were made from, I’ve heard it said that the shape means that they can be changed out easily for other colors. 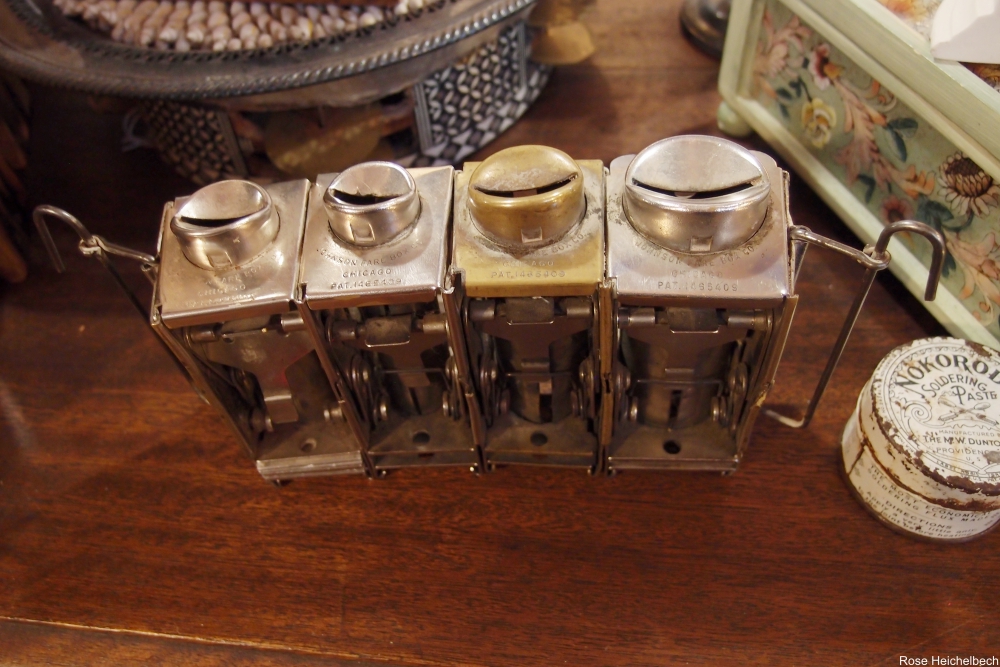 Looking for another challenge? We’ve got 6 more mystery items that most people cannot identify! Test your knowledge and click the next page button to give it a shot!