Jackie Kennedy Redesigned How We Think of the White House

When John F. Kennedy was inaugurated in 1961 he became the second youngest president in American history (the first being Theodore Roosevelt). With President Kennedy came his young wife and family, a breath of fresh air in the White House. The stately presidential home became the scene of children’s birthday parties and family gatherings.

First Lady Jacqueline Kennedy was always dressed to the nines in an impeccably modern yet elegant wardrobe, a style which seemed to match her personality. But, far from wanting to modernize the interiors of the White House, she set out to restore the furnishings to a more stately and period-appropriate aesthetic. Today, many of the changes she set in motion are still visible in how the White House looks today. 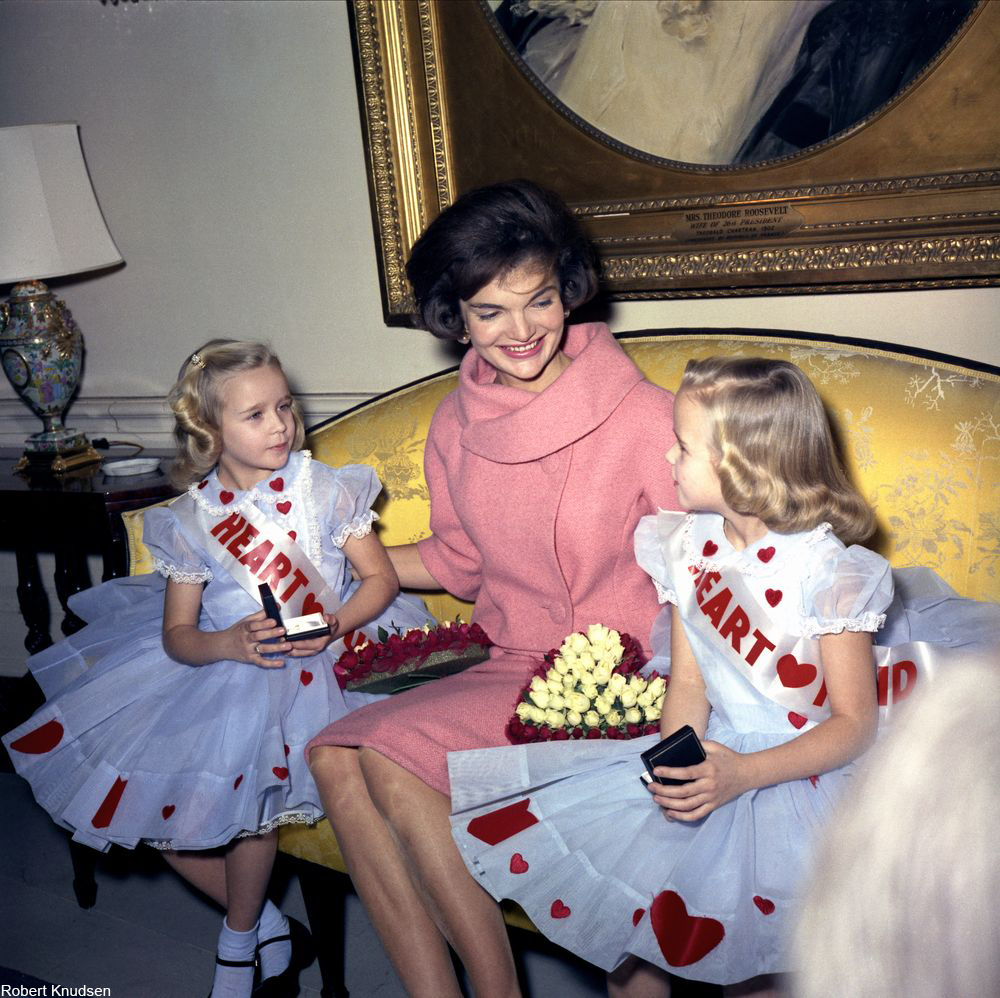 The History of the White House

The White House had been the seat of power since 1800 when John Adams was the president. But, the British burned the White House down in 1814, destroying the interiors of this monument to democracy and of the American Revolution. The White House was restored in 1817 under president James Monroe and many presidents since then have put their mark on the interior style. 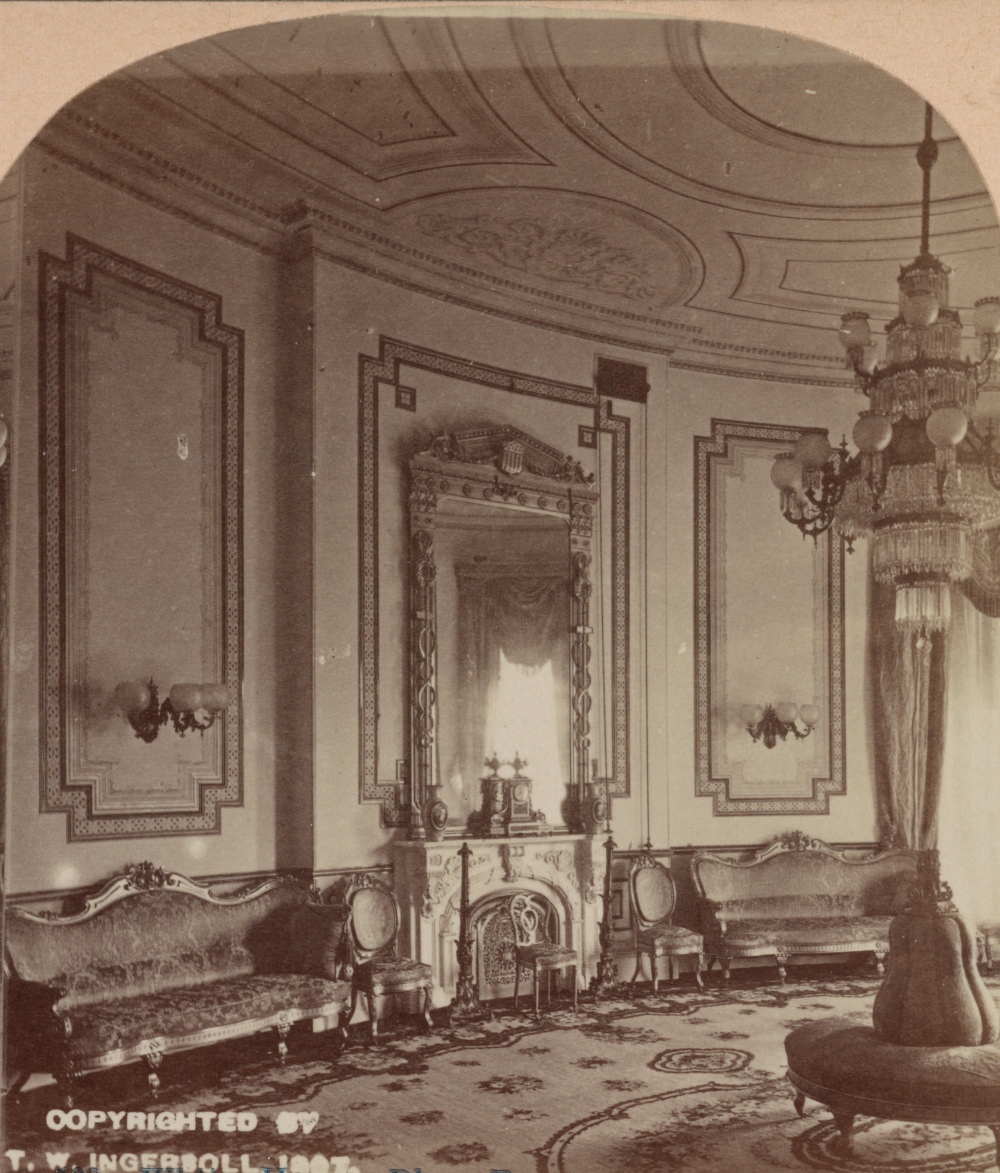 The Blue Room as it appeared in 1898. Via/ Library of Congress

One of the more magnificent transformations was when President Chester Arthur commissioned Louis Comfort Tiffany in 1882 to redesign a room that had been used for various functions, including as an antechamber, a small dining room for intimate parties, and a family drawing room. This design featured red walls and furnishings dotted, as well as hand-painted geometric stars on the ceiling and finished with gold accents throughout. Today this room is known as the Red Room. 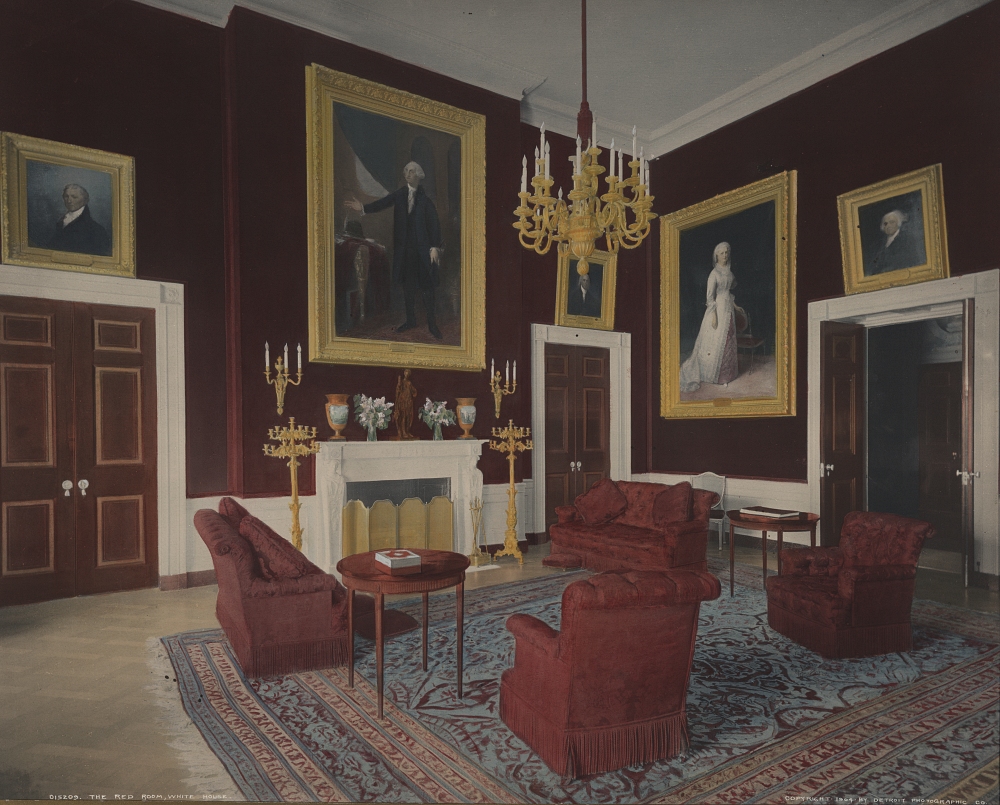 The Red Room as it appeared in 1904, sans ceiling stars. Via/ Library of Congress

Some criticized the “high Victorian” or “steamboat Gothic” style that many of the White House rooms took on in the latter half of the 19th century. Much of this style was toned down or erased with the Theodore Roosevelt renovations of 1902. But, by the time the Kennedys moved in the decor was looking rather drab- at least to Jackie. 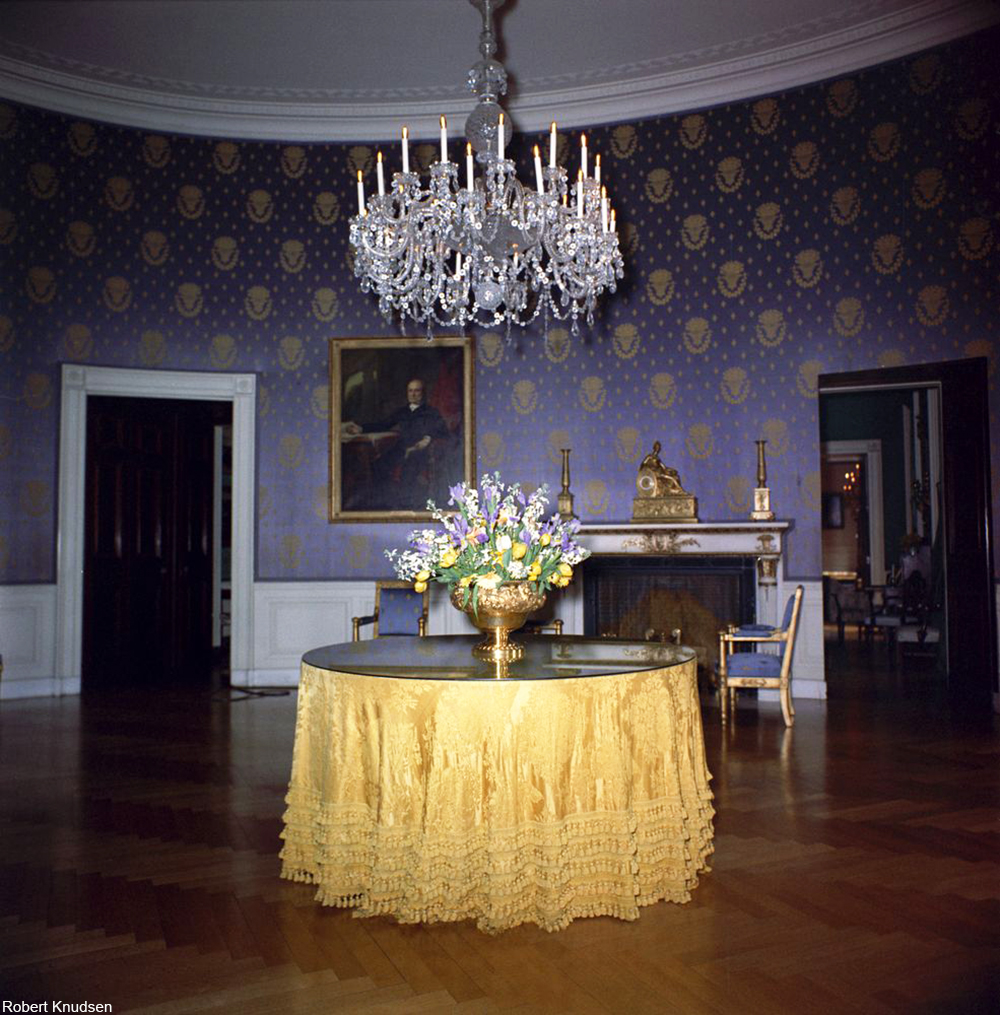 The Blue Room in the spring of 1962. Via/ JFK Presidential Library

The First Lady wanted to bring back some of the 1800s style to the White House as it had been somewhat lost over the years. Having been educated on matters of art, craftsmanship, and history, she was the ideal candidate to envision a redecoration that harkened back to the earlier days of the White House. But, of course her fascination with France deeply influenced the designs that were chosen. She started working on the renovations nearly as soon as they moved in. 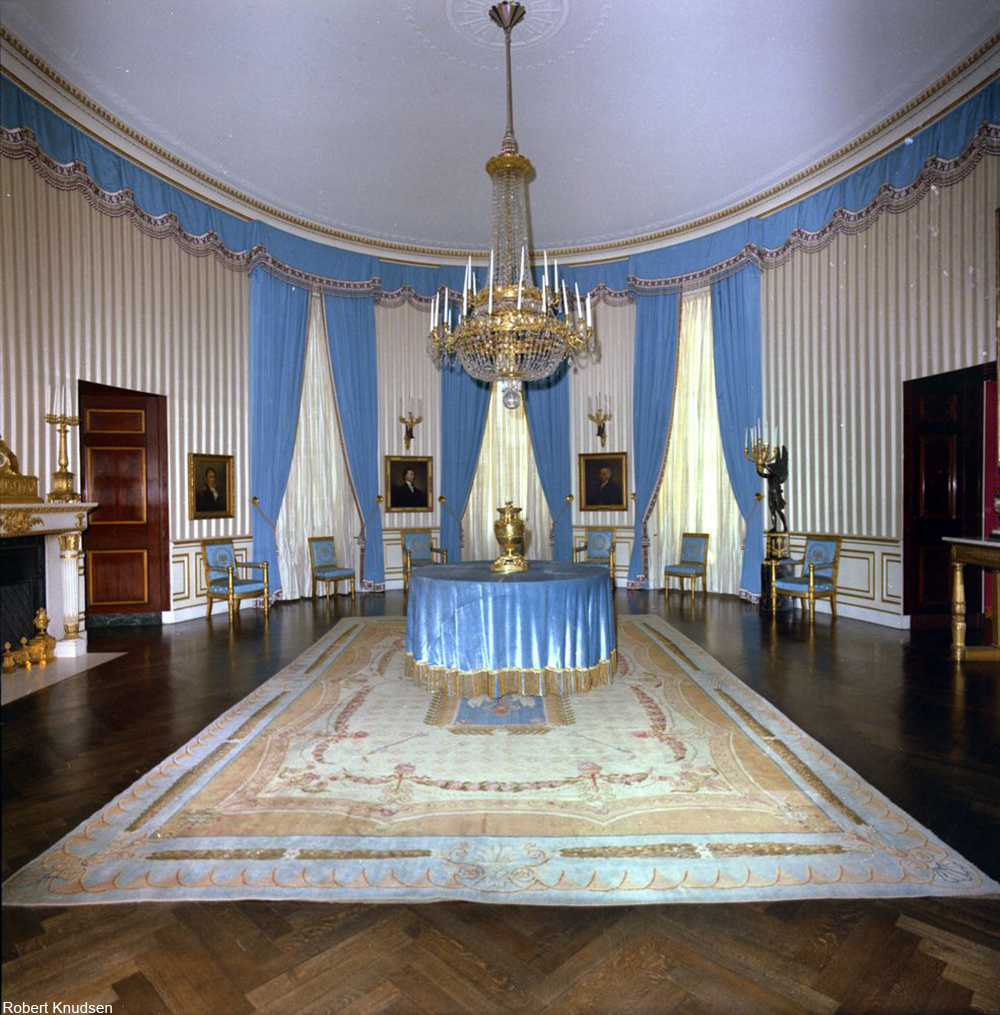 The Blue Room in summer of 1963. Via/ JFK Presidential Library

The FLOTUS quickly set to work restoring the rooms that she felt were of the utmost importance. But, she knew that these improvements, though worthwhile, would come at a great financial cost.

In order to fund the renovations, the First Lady set up the White House Historical Association and created fundraisers for this new organization. Prompted by the FLOTUS herself Life magazine publicized the cause and soon the nation was in financial and conceptual support of the renovations. It is because of her efforts that many improvements and restorations of the White House took place when her husband was in office and ever since then. The organization is still improving the White House to this day. She was also instrumental in forming the White House Fine Arts Committee, which was headed by Henry du Pont back then, and maintains a database of decor references and antiques. 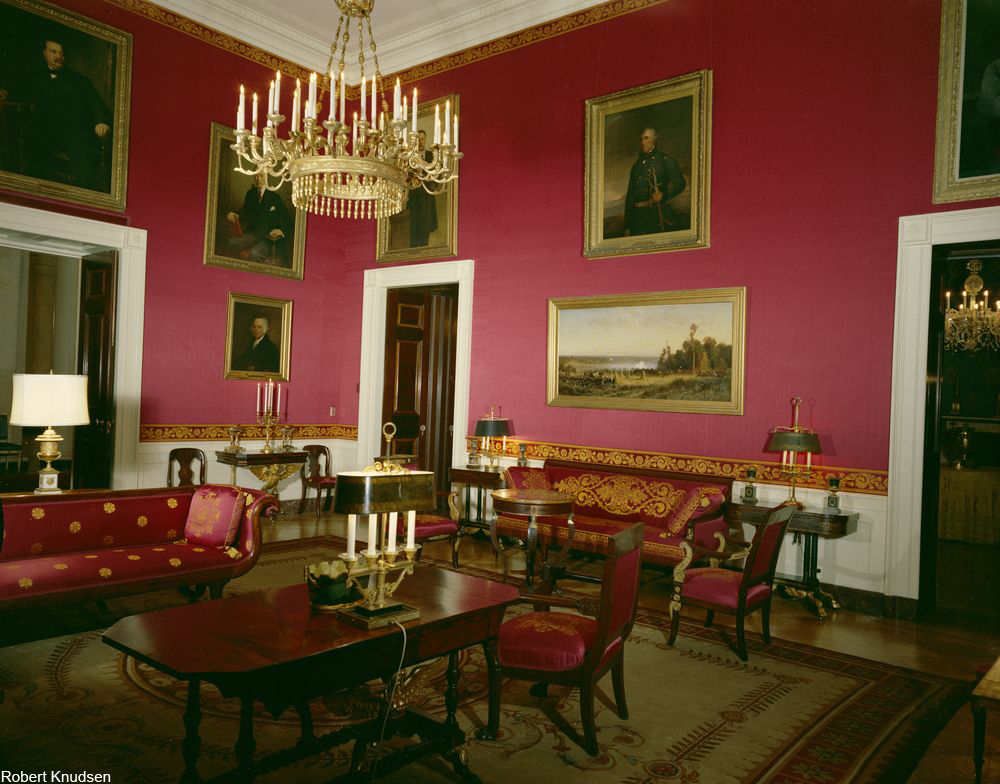 One of her greatest achievements was the Red Room, which was returned to its former splendor, albeit in a more French Empire style than Tiffany’s more whimsical take on Victorian. The resplendent fabrics were made from historical French designs but woven in the U.S. The walls are covered in a rich red fabric that has a border woven in gold threads.

Within the span of just over 1 year Jackie Kennedy had already seen through the renovation of most of the White House. Her February 1962 tour of the White House was broadcast on CBS with an extremely high viewership as America peeked into the home of the First Family.

The research on history and antiques that was done as part of the restoration became the basis for the guidebook that was first published in 1962. The fact that a guidebook to the White House exists at all it also down to Jackie Kennedy, as she lamented not having one when her family visited the White House when she was a child. 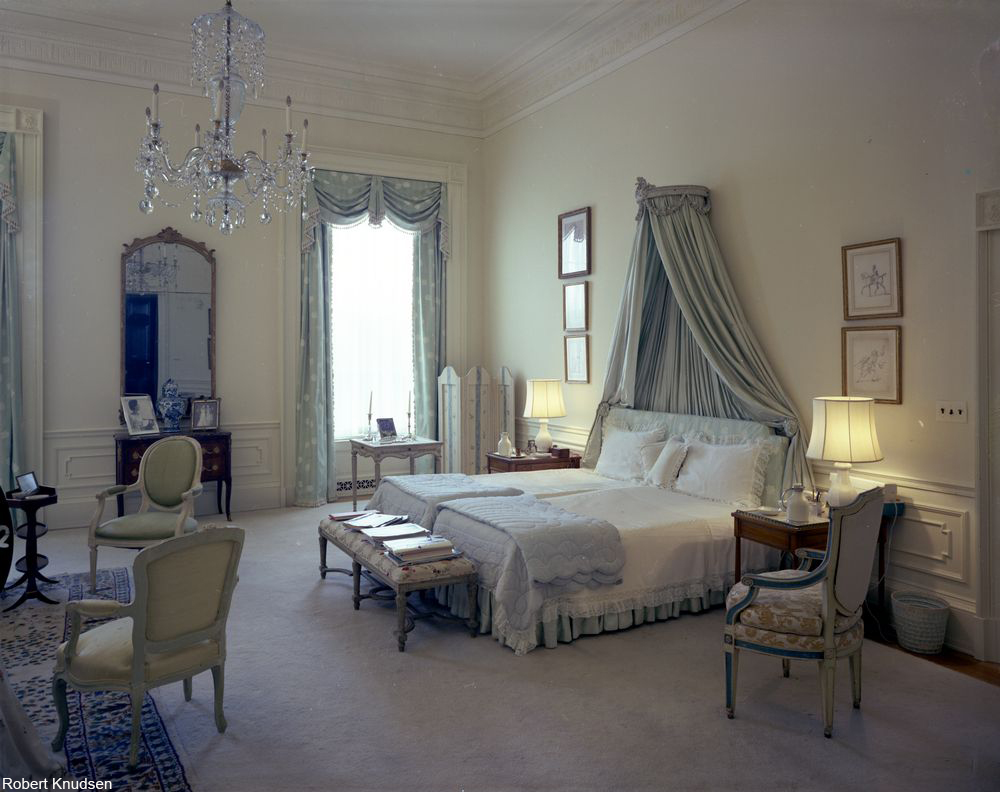 The more private areas of the White House, such as the FLOTUS’ bedroom (above), were done in a style much like the rococo that would become so popular during the 1960s and 1970s- in part thanks to her own efforts. This meant that the room, done in off white, “ice blue”, and “sea-green” had a kind of 1960s meets Louis XVI feel to it. Much of the work was done by French designer Stephané Boudin (he was a replacement for designer Dorothy Parish whose plans and attitude the FLOTUS didn’t think suitable).

Many of the changes and methods of research that Jackie Kennedy put into action during her short time in the White House are still used today and her public tour on TV inspired a wave of tourists to visit the White House on a regular basis- not only to see where the most powerful man in the world lives- but also to see the fine furnishings that set it apart from any other building.