The Fascinating “Fancy Dutch” Hex Signs on the Barns of Pennsylvania

The unique culture of parts of rural Pennsylvania was largely created from the Amish, Mennonite, and Lutheran immigrants from Germany and Switzerland. The art of decoration that these immigrants brought with them shaped what we think of today as Pennsylvania Dutch. Unique folk arty designs painted on barns and houses came to be known as “hex signs” and they have surprisingly little to do with witchcraft. 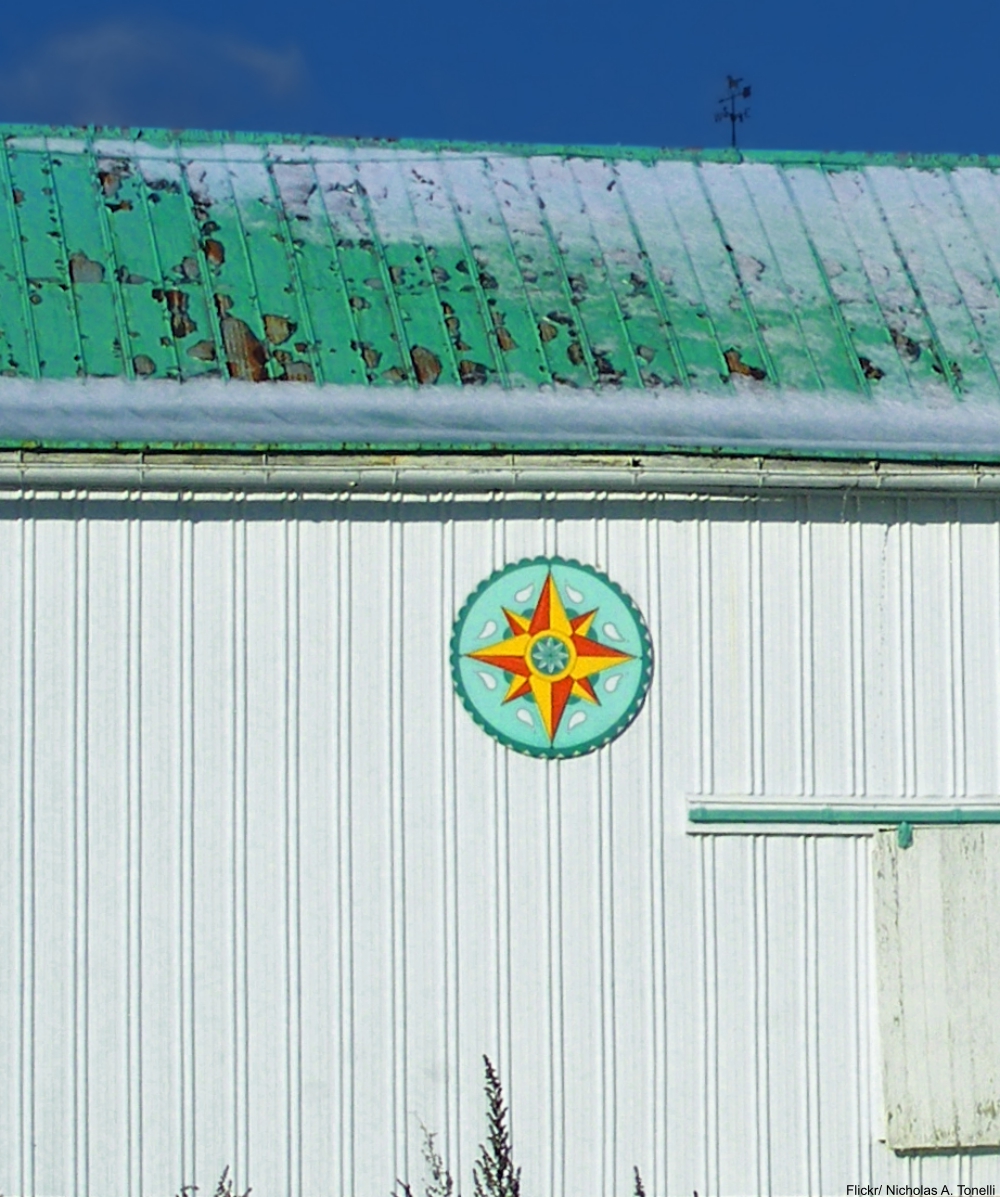 The style of decoration evolved from the German fraktur art, a form of embellishment that was found on birth certificates, bibles, marriage licenses, buildings and many other objects since at least the Middle Ages in Europe. 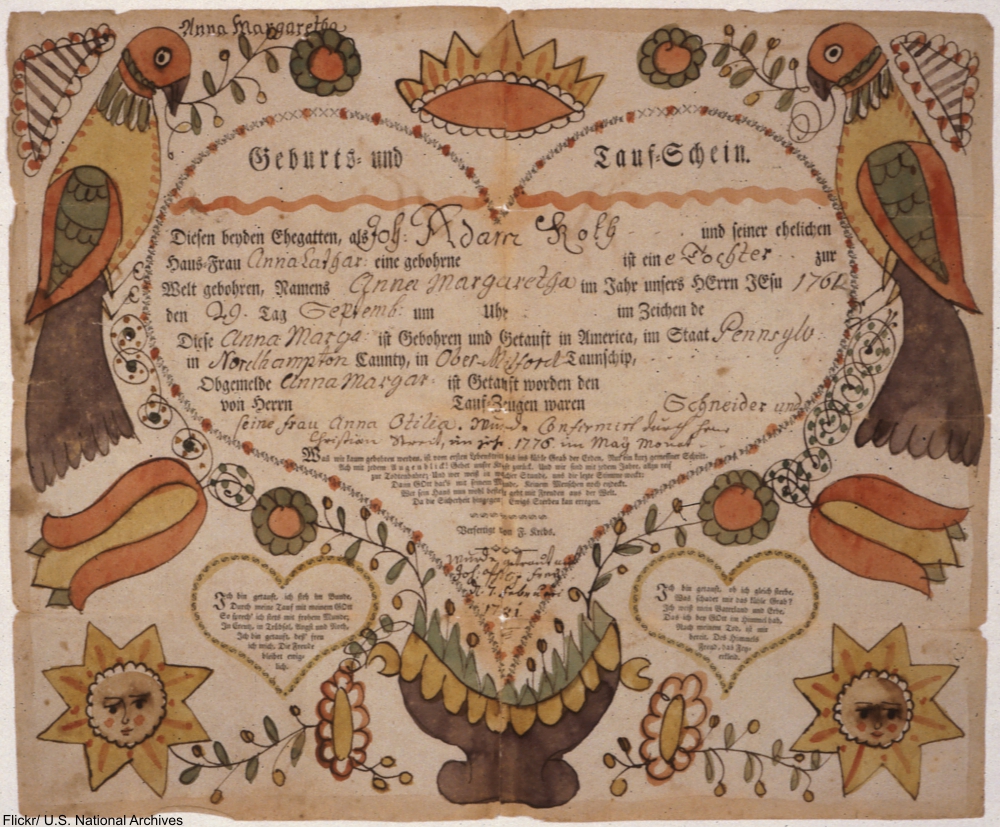 Star designs have a long history that dates back to pre-Christian times when pagans utilized pentagrams and octagons in their rituals. As with many old symbols, the star patterns were adopted by various Christian groups as symbols of luck and protection.

The Fancy Dutch, meaning the German-speaking Lutherans, used these symbols to decorate their belongings and painting them on barns became a local tradition. The Plain Dutch, the Amish and Mennonite groups, largely do not use these symbols as they are considered superstitious and overly flashy. 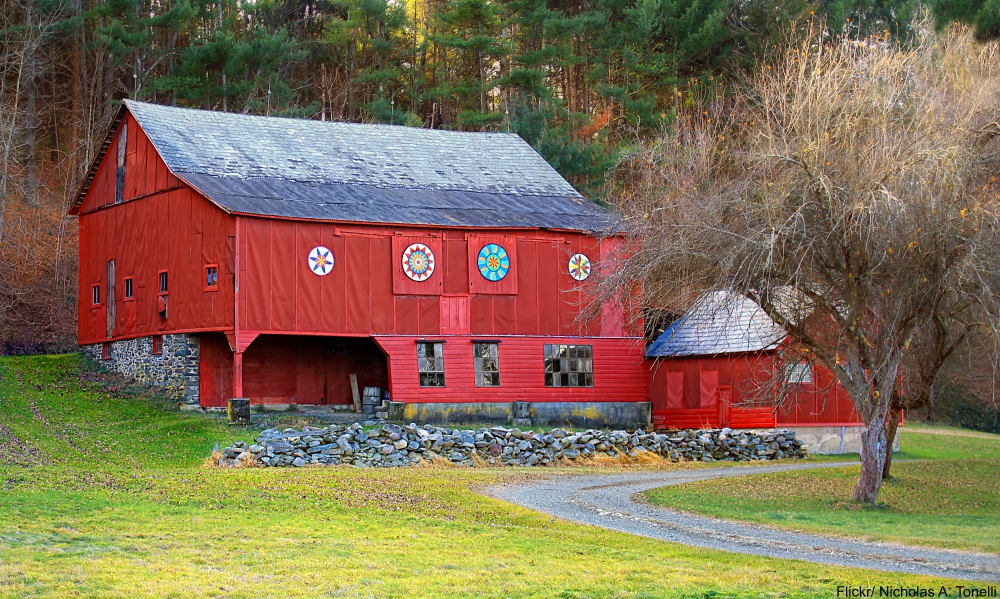 Many of the hex signs focus heavily on star patterns and the number of points on the star hex signs indicated what that family was hoping for – 5 points was for good luck, 8 points for fertility, and 16 points for prosperity. 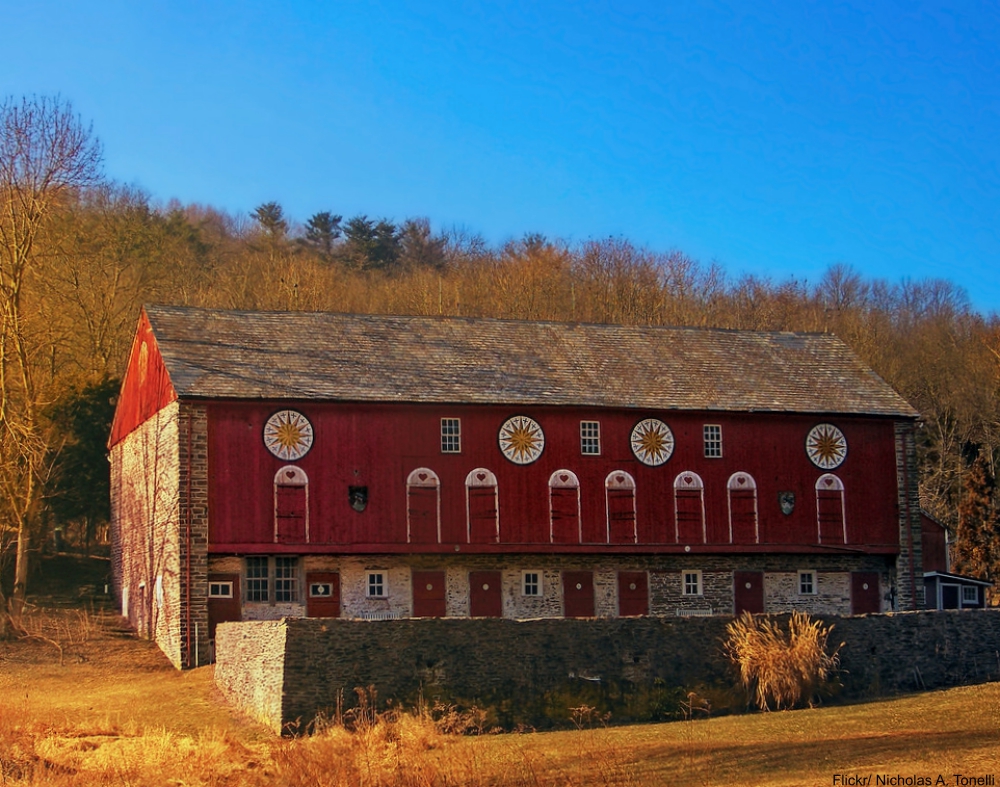 Barn with many star designs, Berks Country, PA. Via/ Flickr

Other symbols are imbued with meaning as well, for a happy marriage/friendship two birds are often arranged together. To show peace the symbol is sometimes unicorns and to reaffirm faith tulips are often used. 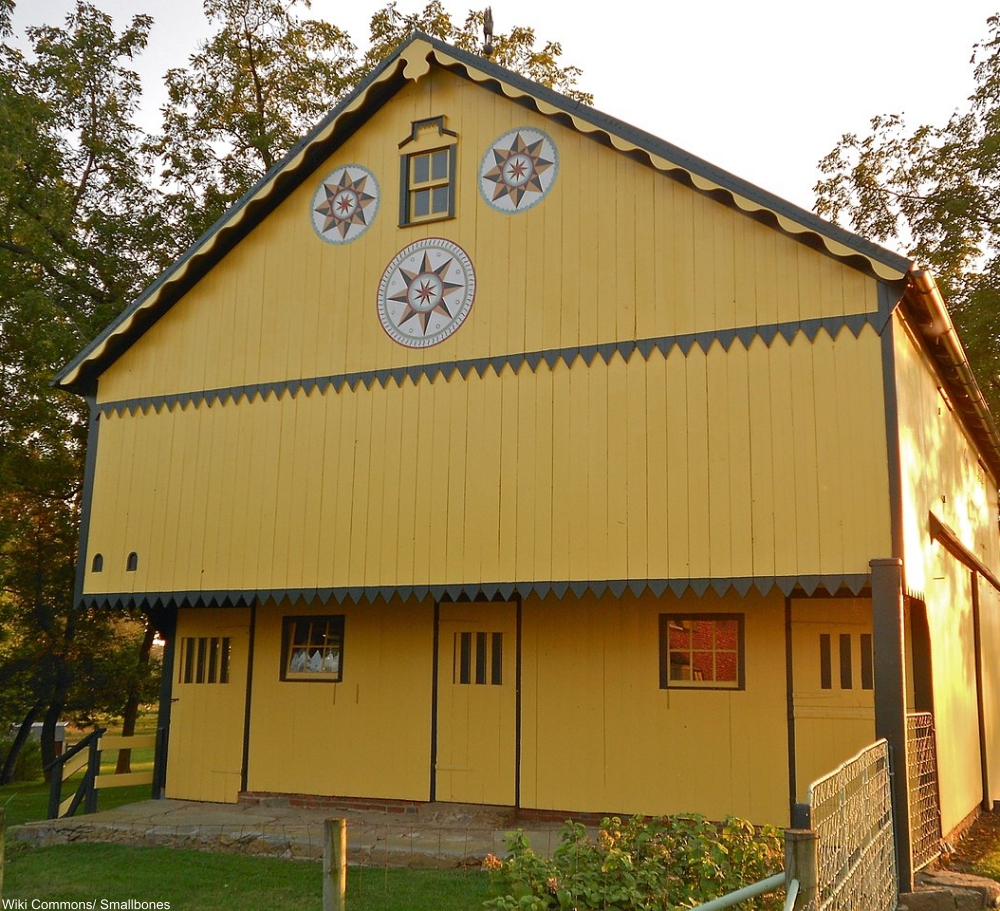 There are some, however, who argue that hex signs commonly are regarded within the community as nothing more than decorations, bearing no mystical meanings. The phrase (in local dialect) “chust for nice” came to be frequently uttered when asked about the meanings behind hex signs.

Painted on the sides of barns, hex signs date back to the late mid-1800s (or possibly earlier). As paint became cheaper and more vibrant throughout the 1800s, the designs were increasingly found on barns and houses. After centuries of relative isolation, there was cultural exchange in the 20th century as technology brought the outside world to rural Pennsylvania and the artists began to sell their designs to tourists. 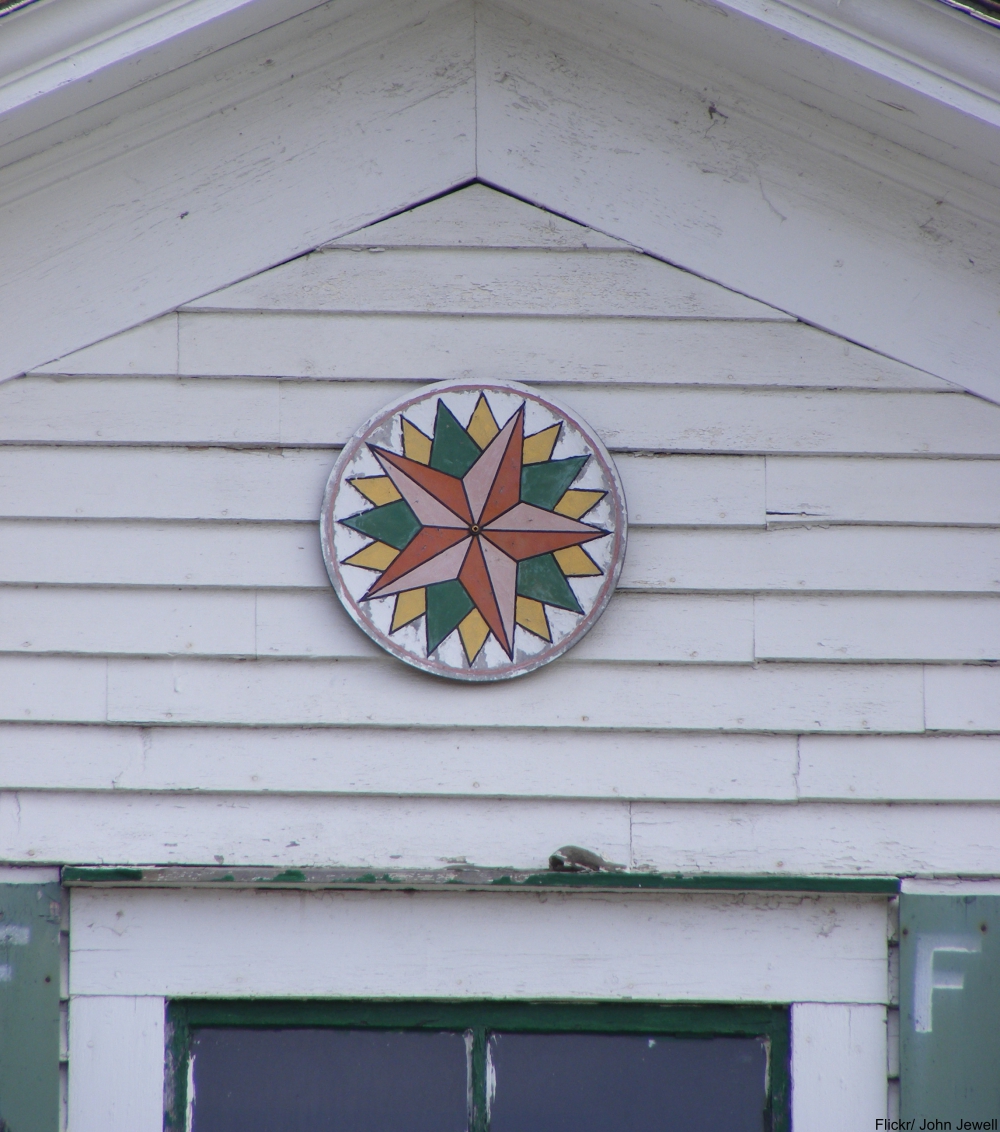 In the 1940s, an entrepreneur named Jacob Zook pioneered the art of painting these hex signs on plaques that tourists could purchase to take home with them. This popular art form took off and soon Pennsylvania Dutch designs could be found well outside the 5 county area where they had once been concentrated. 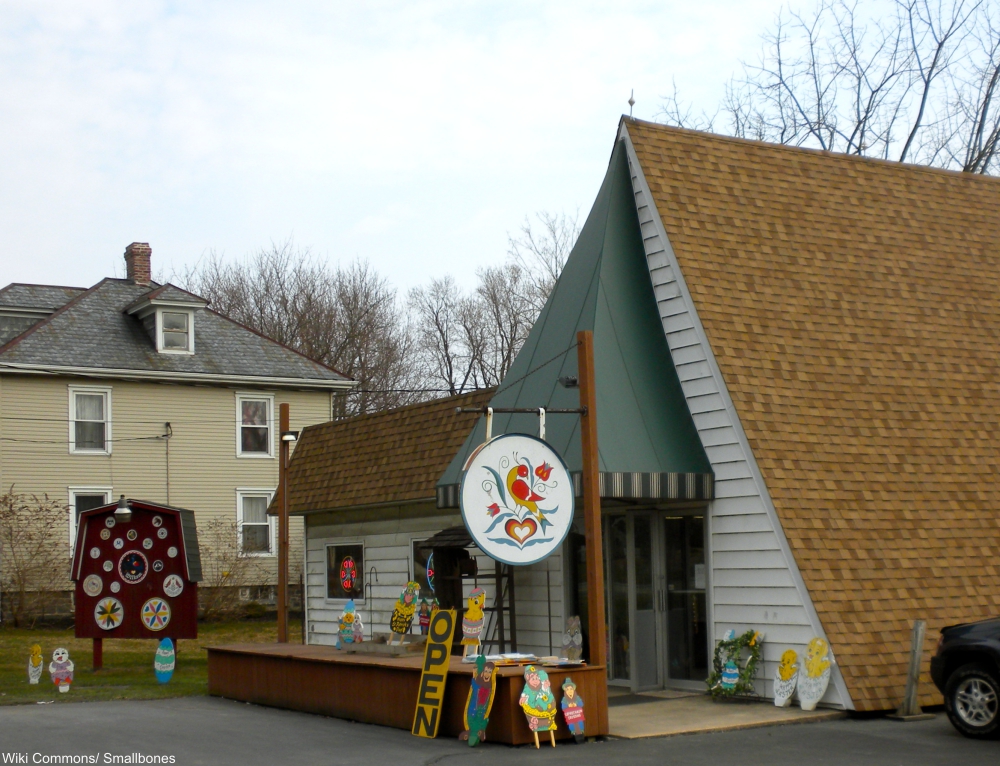 The designs have often been copied for commercial use, most notably on various home goods throughout the ’70s when takes on these folk designs could be found on china, wallpaper, and a host of other decorative items.

Click “Next Page” for the scoop on what qualifies something as folk art!