As you walk through the grocery store, you are probably focused on the food or perhaps watching in front of you, so you don’t run your shopping cart into anybody’s ankles. If you happen to be shopping at the new Lidl grocery store in Dublin, however, you may just want to take a look down every once in a while.

That grocery store opened in mid-October, after being built over an archaeological site with plenty of 11th-century history. They didn’t want to cover over the medieval Viking building underneath completely, so they included some glass flooring so you can look down into those ruins as you are shopping.

They didn’t realize that the ruins existed until they started construction for the new grocery store. Archaeologists went to explore the site and they found a small structure in the ground. It seems as if the foundation of the ancient building was dug out and then lined with stone. A wooden structure was likely above the remaining ruins.

Although it isn’t fully known, they feel that the underground area was likely used for storage. There were also likely many dwellings above ground that did not survive. After all, they were built over 800 years ago!

RTE News reports that researchers have discovered everyday artifacts at the location, including a clay pitcher from the 13th century. 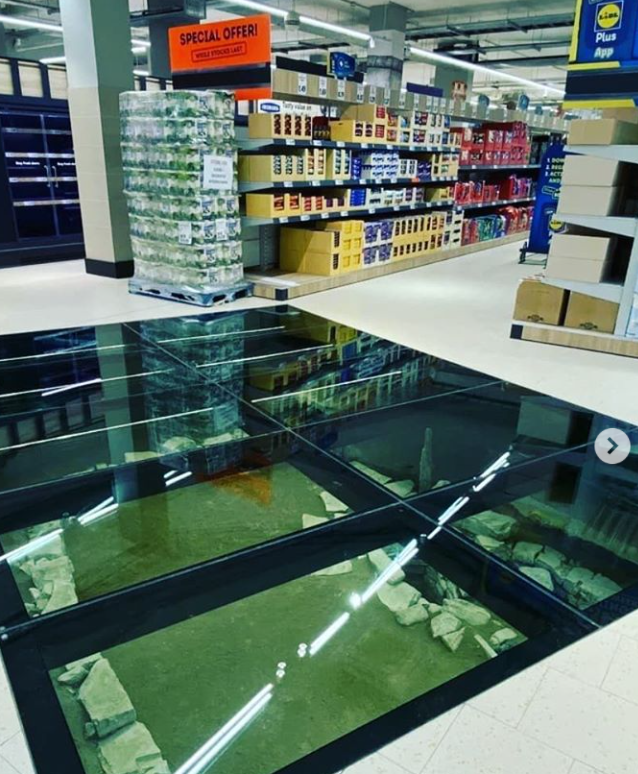 When Vikings arrived from Norway by the time the ninth century came around, they married the Gaelic locals. This produced a dynasty of Hiberno-Norse lords who ruled Dublin in the style of Kings until the approximate time that the construction of the ruins found under the grocery store was created. They think it was around the year 1070.

Shoppers can do more than pick up produce and canned goods while at the store. They can learn more about the medieval past in their area by looking down through the floor at the ruins. There are also displays providing information throughout the store. Shoppers can also look down through glass at the remains of a backstage staircase from the 18th century Aungier Street Theater. Preserving history in this way makes it accessible to everyone.