In the 1890s one American artist revolutionized the way the country saw women. Charles Dana Gibson drew his modern girls to be feminine, sly, and quite with the times. They poked fun at men, rode bicycles, held jobs, married up, and did all manner of new-fangled things. This new way of portraying women was not without its pitfalls, though. Women had not generally been seen like this in political cartoons and commercial art, but the criticisms were taken with a spoonful of honey: Gibson drew his subjects to be stunningly tall, thin, and beautiful as well as modern. 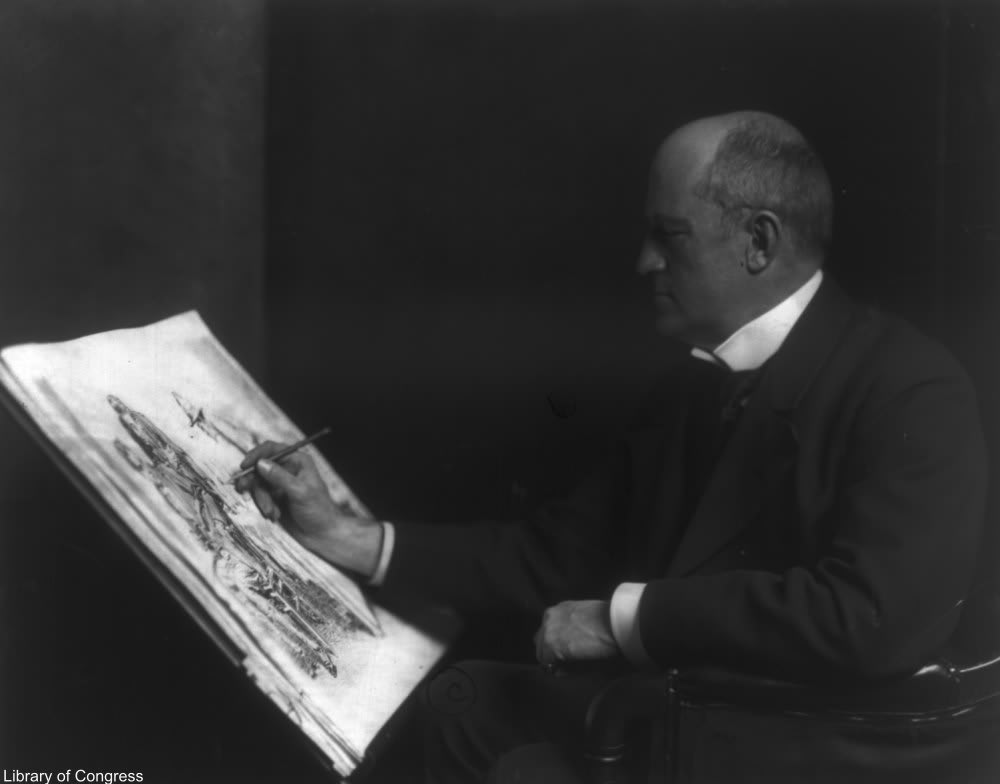 Charles Gibson at work, 1915. Via/ Library of Congress

The Victorian era had driven a wedge in between the worlds of men and women. Whereas a husband and wife might have worked together in the family business or on the farm together in preindustrial times, the rising industries of manufacturing and retail made “going to work” something that happened outside the home for men only. Women who skirted these ideals were considered rabble rousers and suffragettes. The new Gibson Girls were one expression of this new found freedom and at the same became one of the first beauty standards for women in the 20th century.

Gibson’s cartoons became so in demand that at one point he was one of the highest paid illustrators of the era. One of his more famous models, Camille Clifford, was rumored to have had an 18-inch waist (we presume this was a corseted measurement). 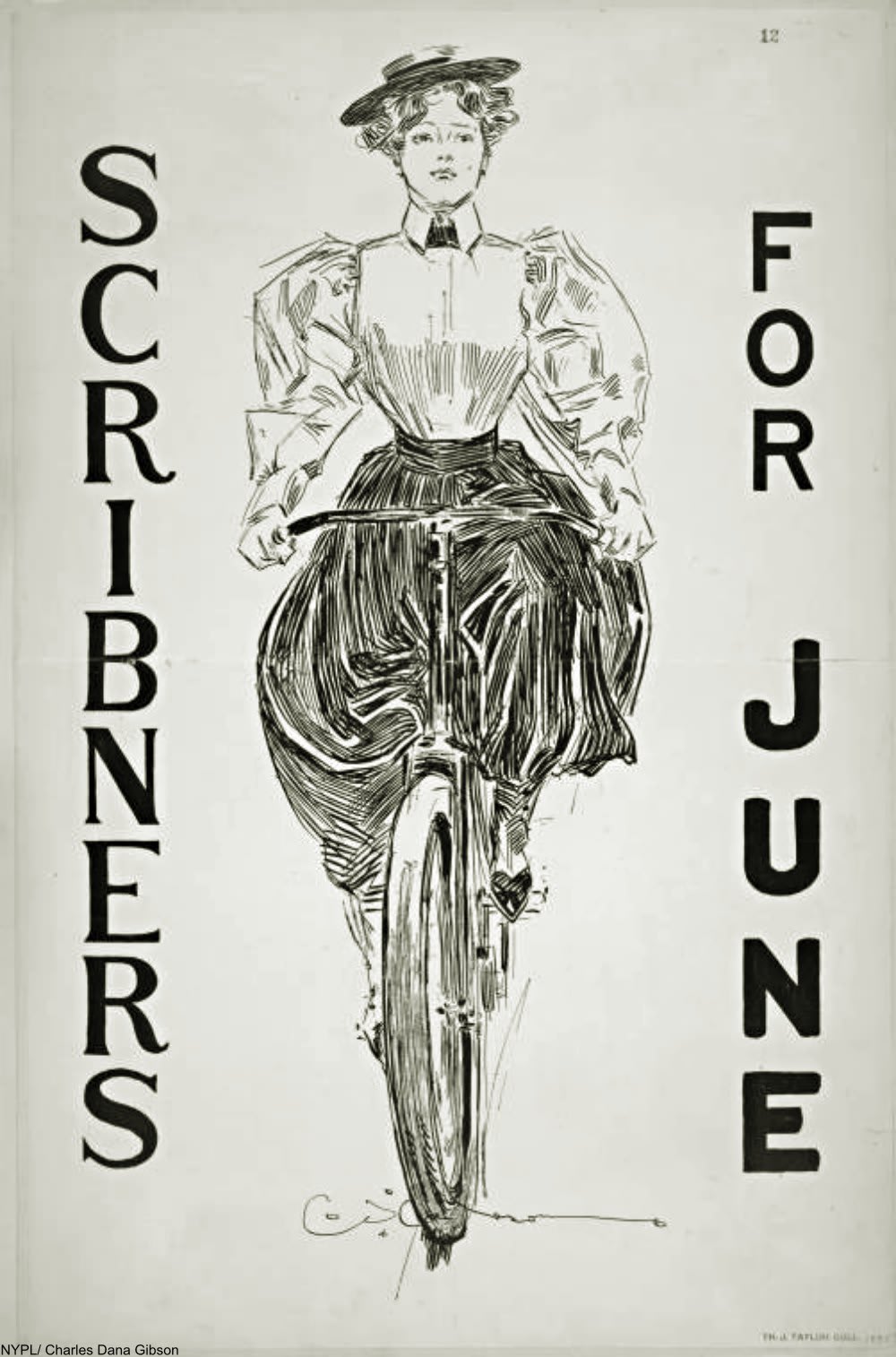 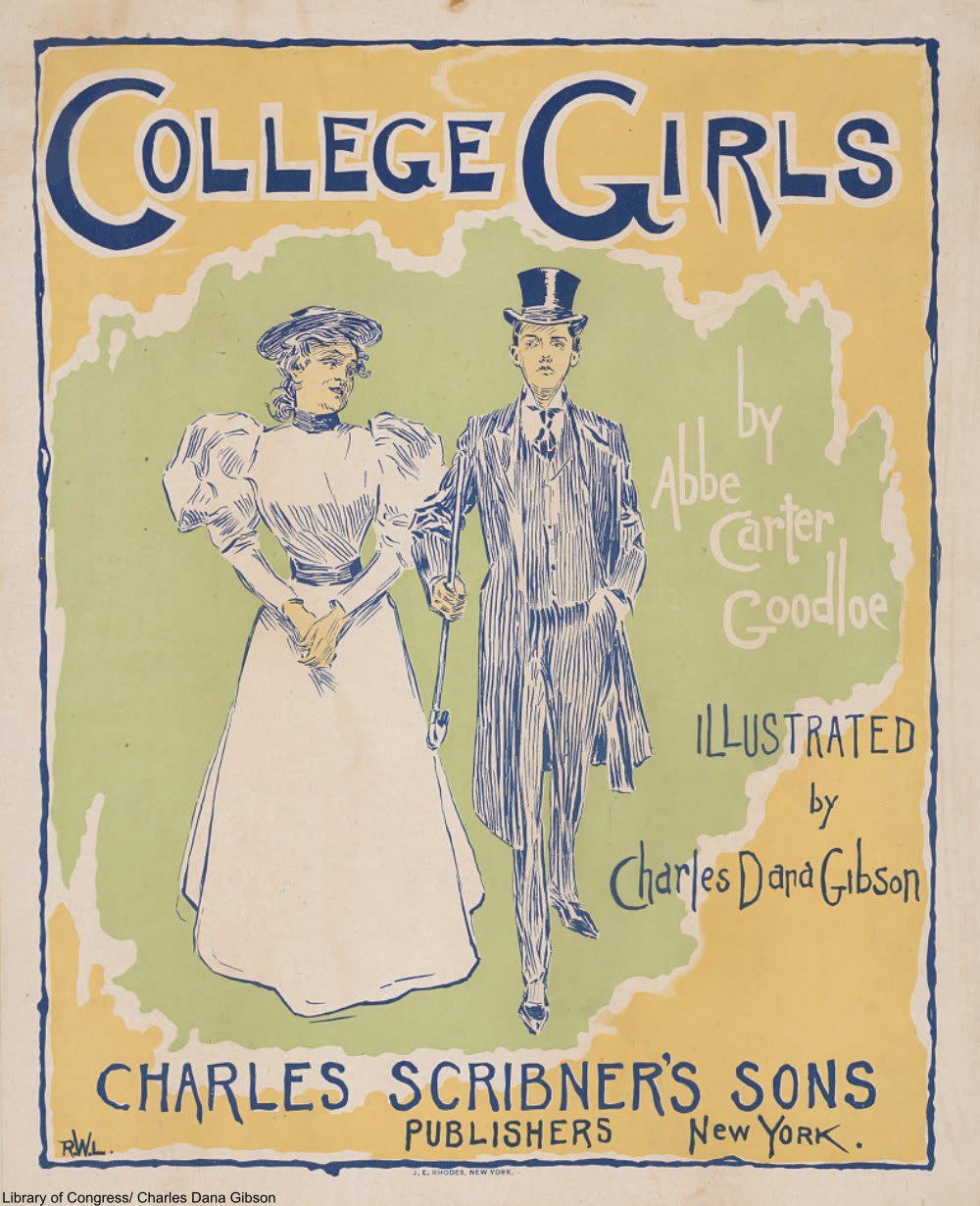 1895 cover by Gibson. Via/ Library of Congress 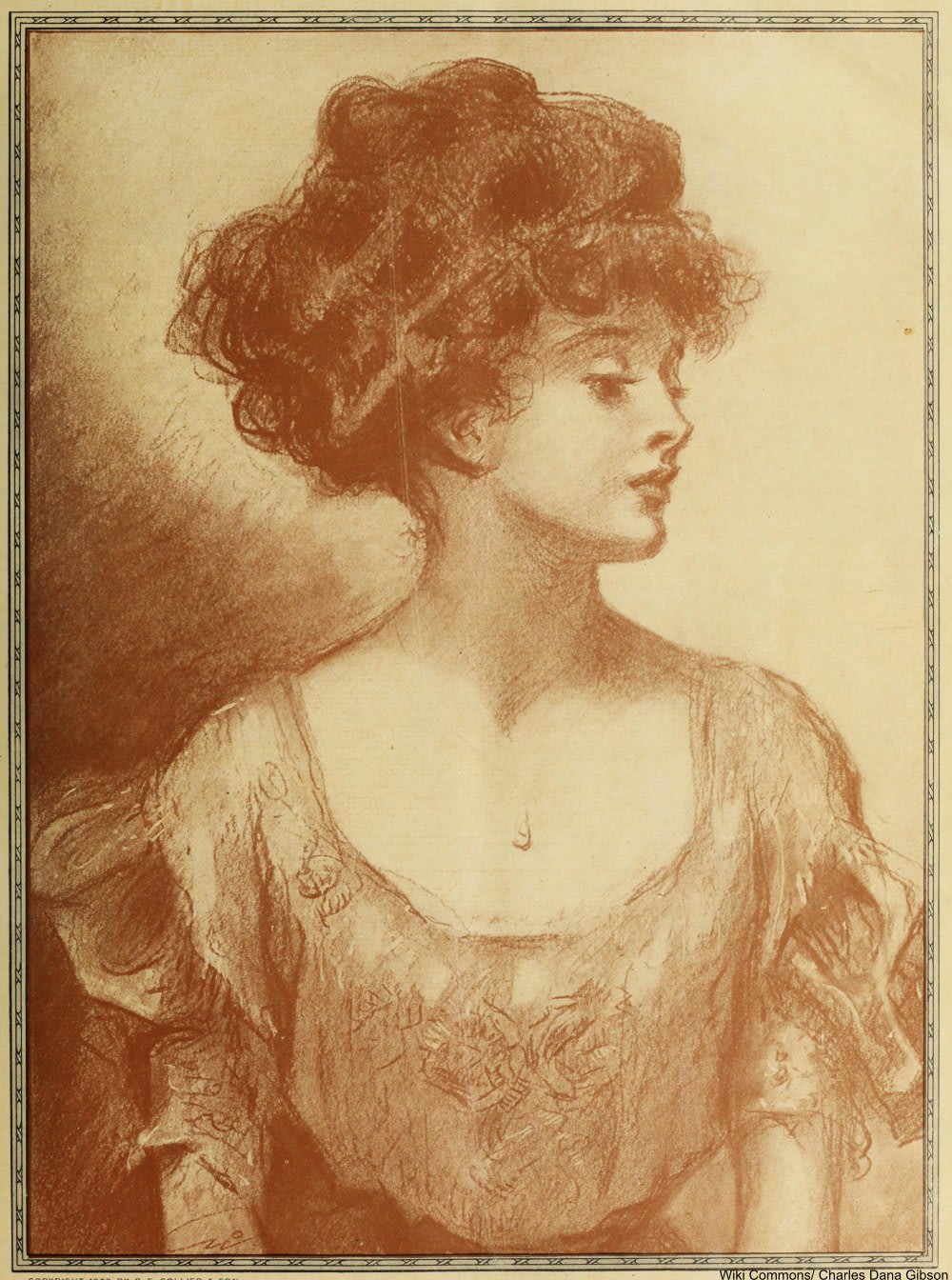 Even at the turn of the century, women were only just beginning to hold steady work as assistants, shopgirls, teachers, and nurses. World War I and the loss of so many male workers meant that women would step into the factories and offices in greater numbers, the Gibson Girls were not quite there yet. And their elegant demeanor was an early standard of beauty for American women, despite the fact that Gibson did not have the highest view of women.

Gibson’s 1903 book, The Weaker Sex: The Story of a Susceptible Bachelor, paints women as predatory creatures who take advantage of men. Despite his opinions on women, the style of fashion became indicative of the era and the phrase “Gibson Girls” for us today conjures up a whole set of glamorous images. 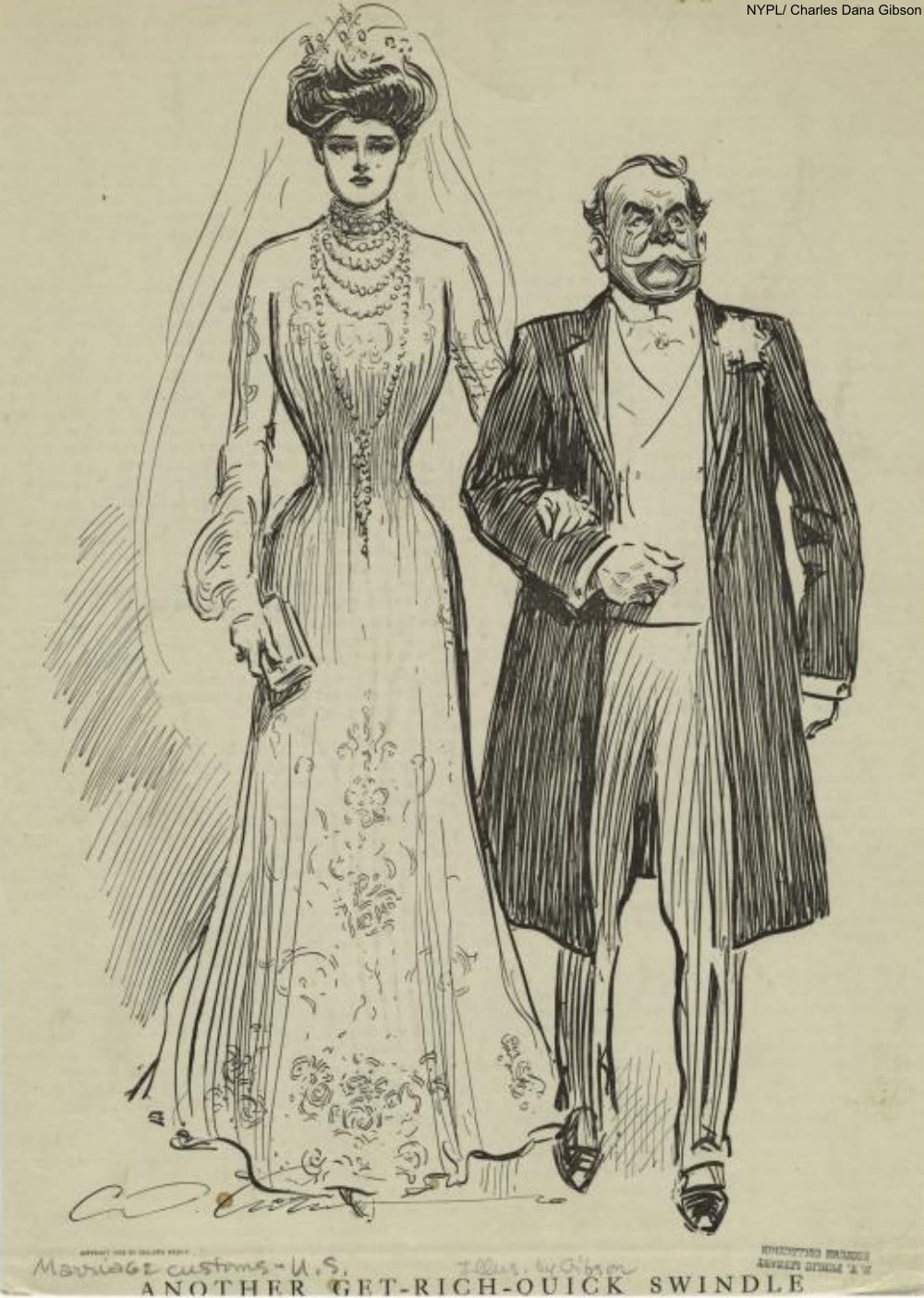 “Another get rich quick swindle.” Via/ NYPL 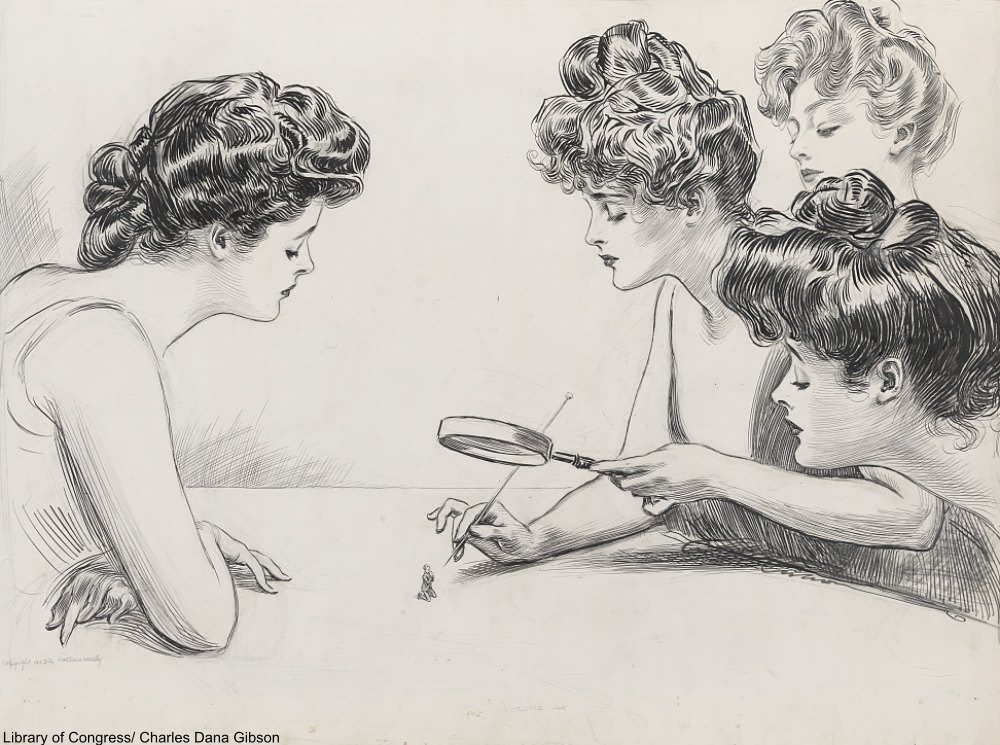 This “weaker sex” cartoon was a commentary on women using their hat pins to defend themselves against street harassment. Via/ Library of Congress 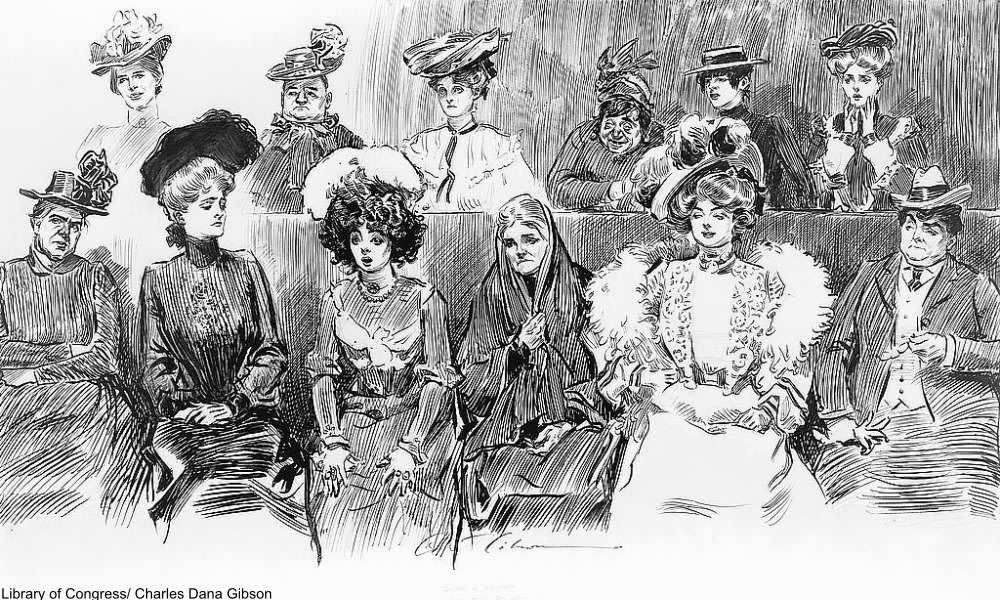 “Studies in expression. When women are jurors” from 1902. Only 3 states at the time allowed women on juries. Via/ Library of Congress 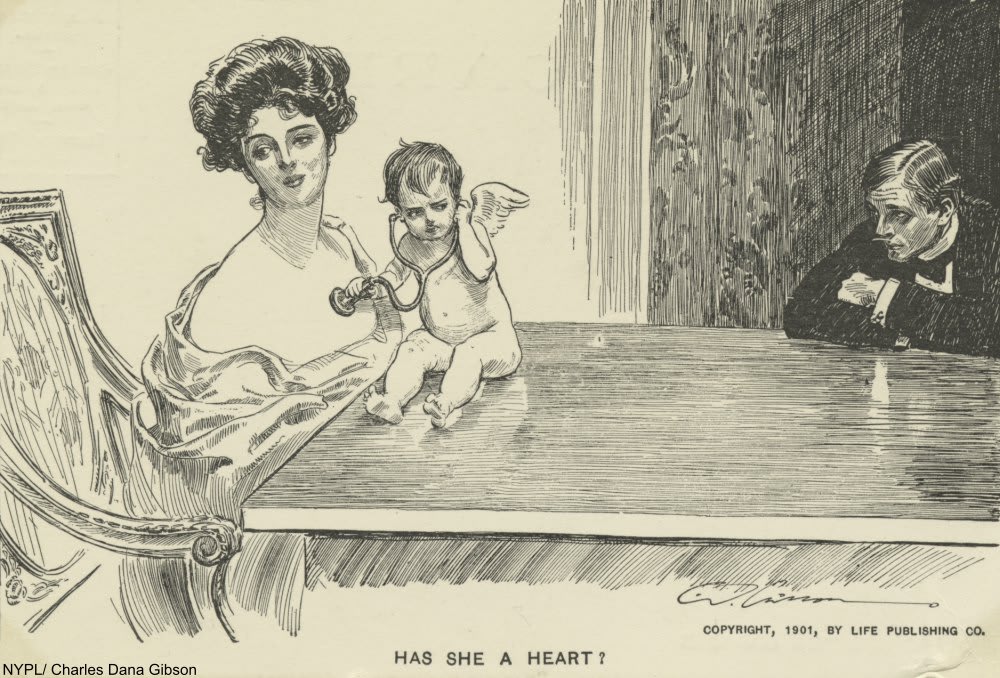 Fashion in the 19th century had revolved around the wealthy and even ladies magazines were often too costly for many women to buy. But, by the turn of the century many families found themselves part of the growing middle class and fashions spread more quickly than ever before with such a larger consumer base. And, Gibson’s art portrayed the idea of middle (or upper middle) class women engaging with fashion and the world in ways that simply had never been seen before.

As early as 1905 debates on who exactly the Gibson girl was were popping up in newspaper articles and the phrase was a contentious one as her demeanor was not sweet and kind, but instead compelling and quite fashionable.
Trends in fashion began to follow the beautiful illustrations of Gibson in an “art imitates life” spiral. And, despite his pessimistic views on women, Gibson managed at times to depict them in stunningly modern ways. 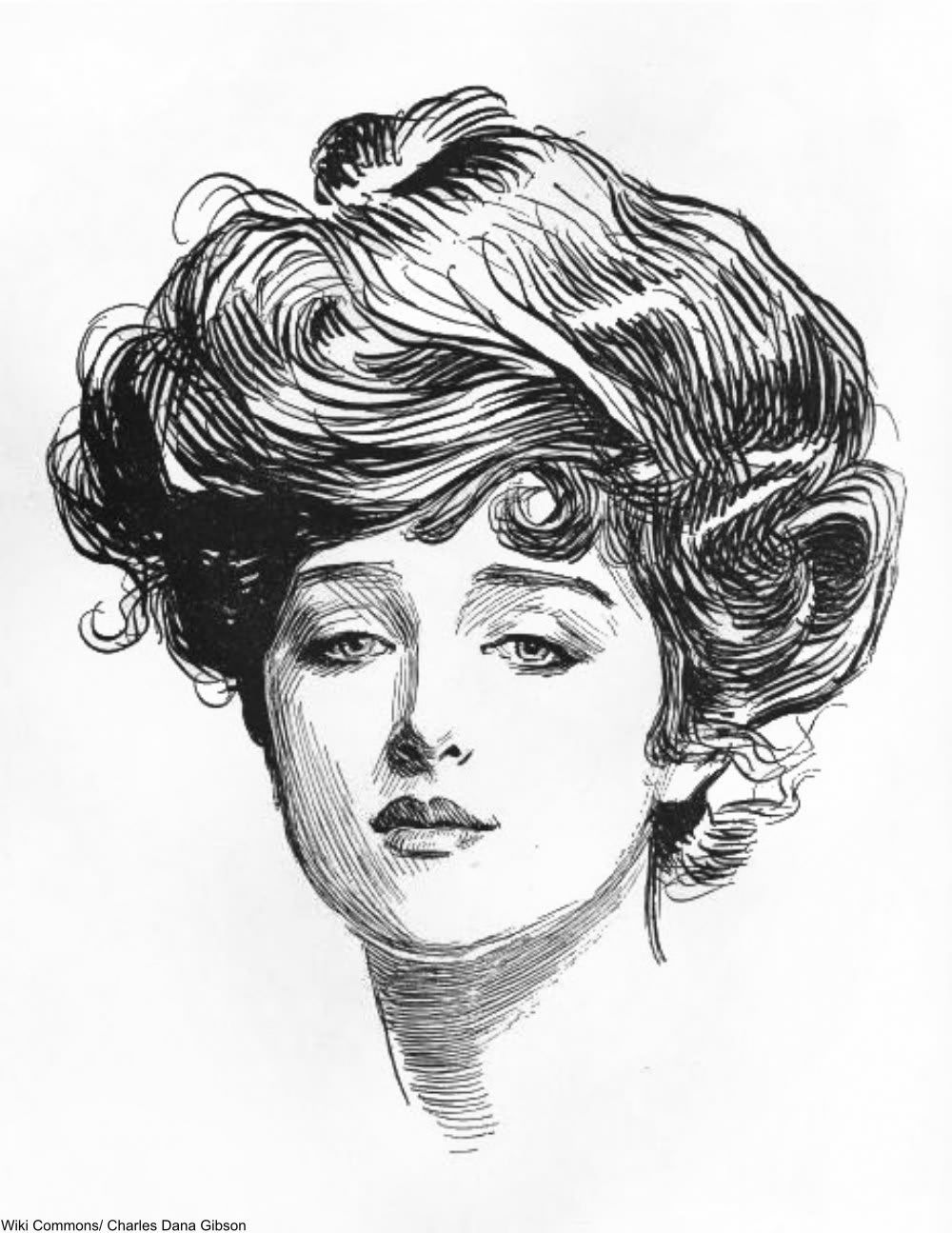 This was the image immortalized in the 1998 USPS stamp. Via/ Wiki Commons 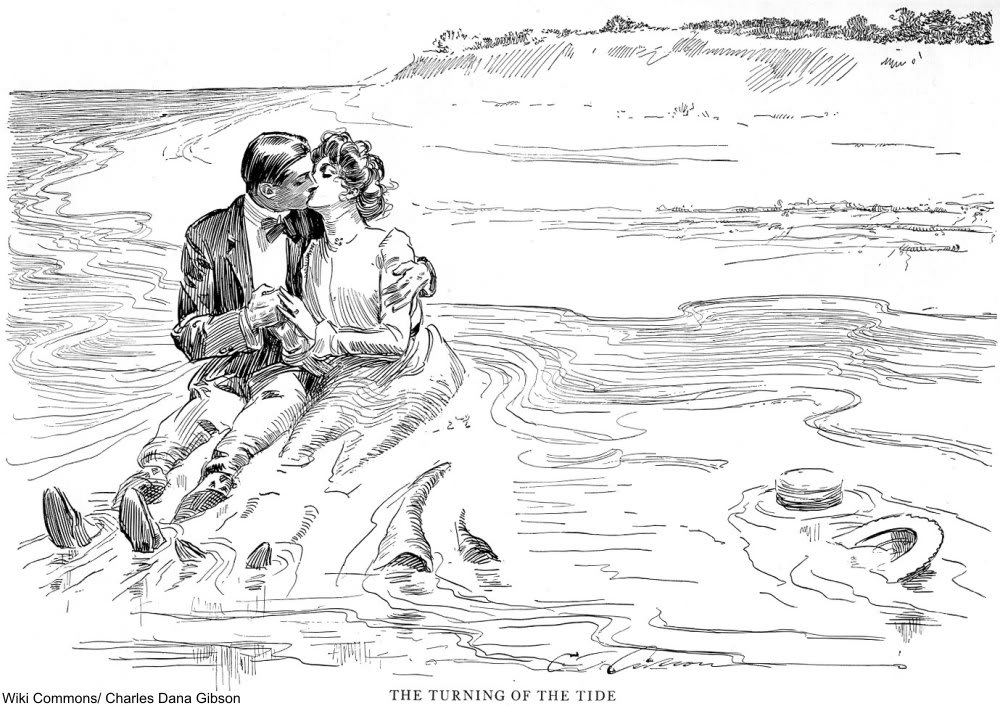 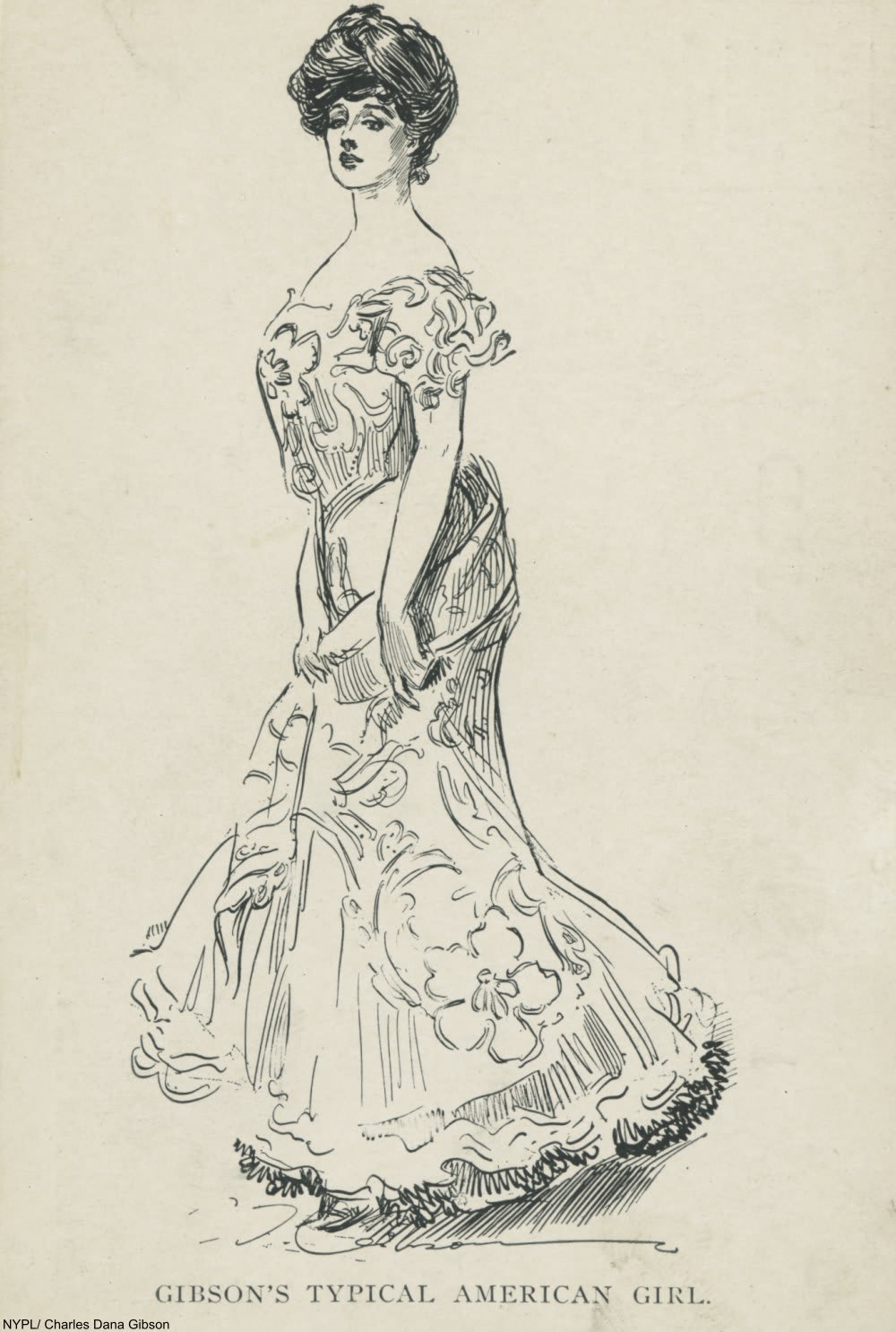 The “typical American girl” by Gibson. Via/ NYPL 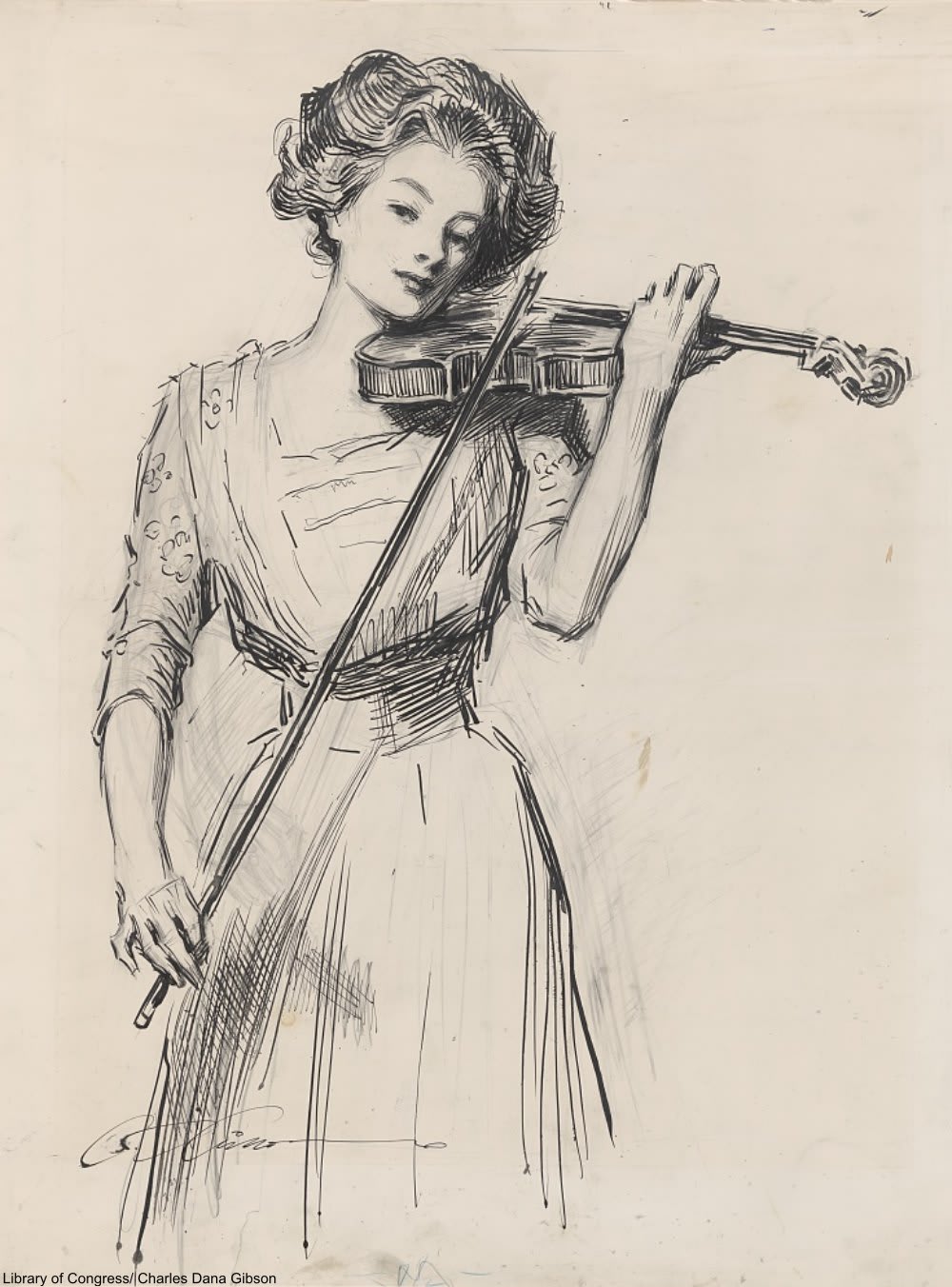 With Gibson’s cartoons making a splash, the overly-pomped hairstyles and high collars seen on his subjects became all the rage. The long limbs of his fictional women became beauty standards that real women tried to follow. Tiny waists were cinched tighter with corsets in an attempt to get that perfectly slim figure like the Gibson Girls had. Some have called the Gibson Girls the Barbies or Kardashians of the early 1900s, such was their impact on fashion. 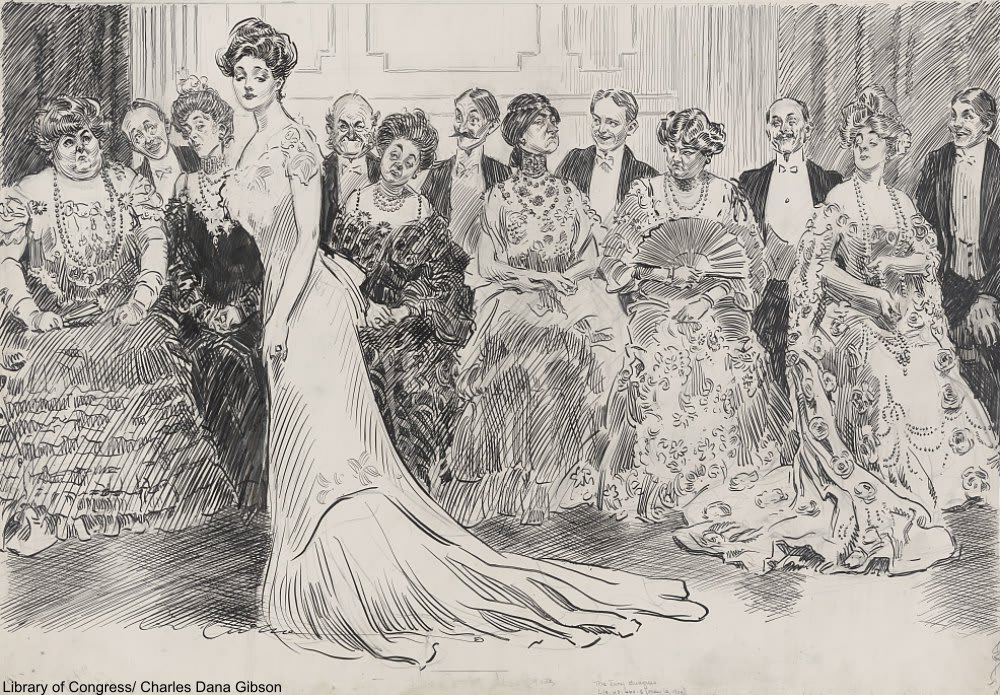 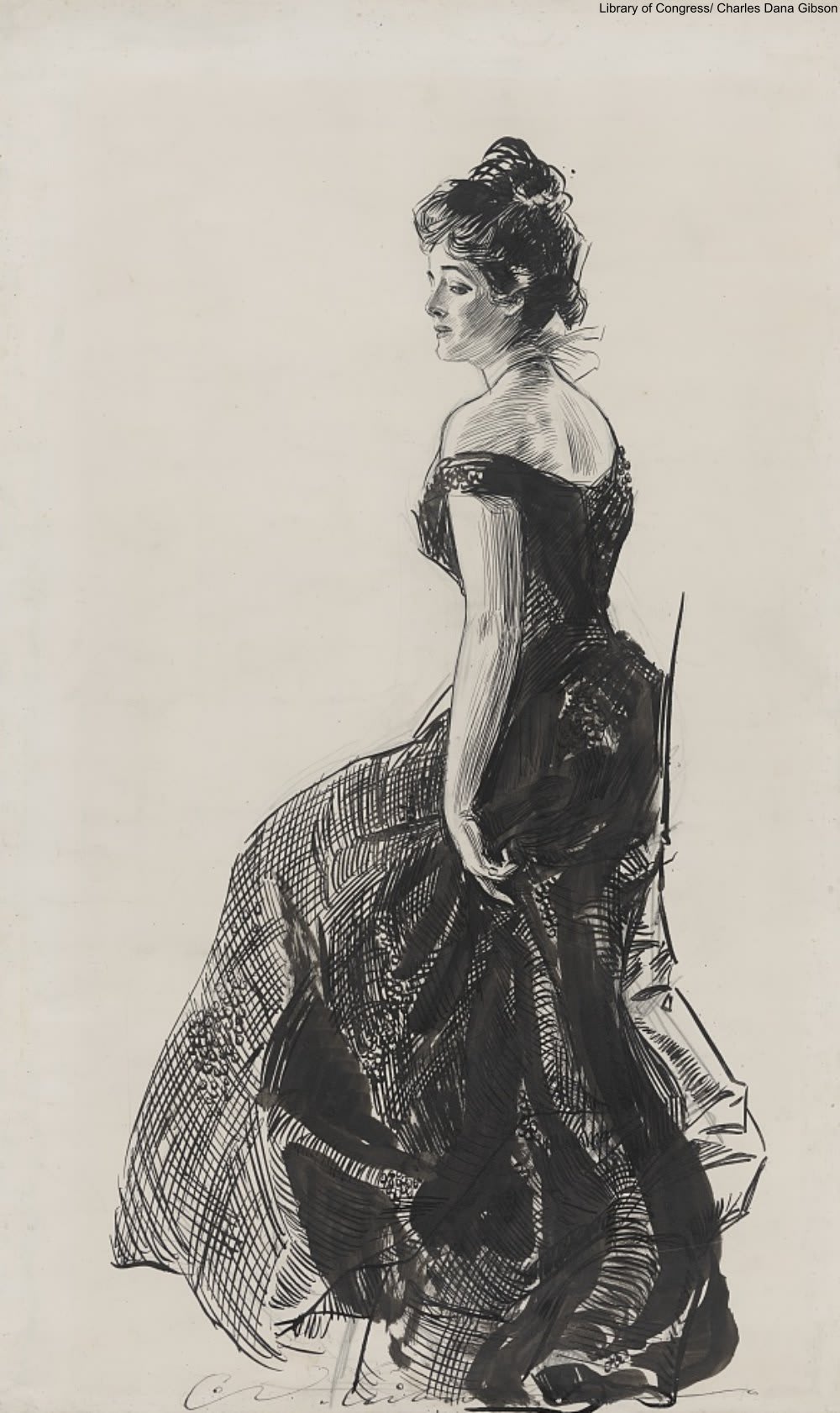 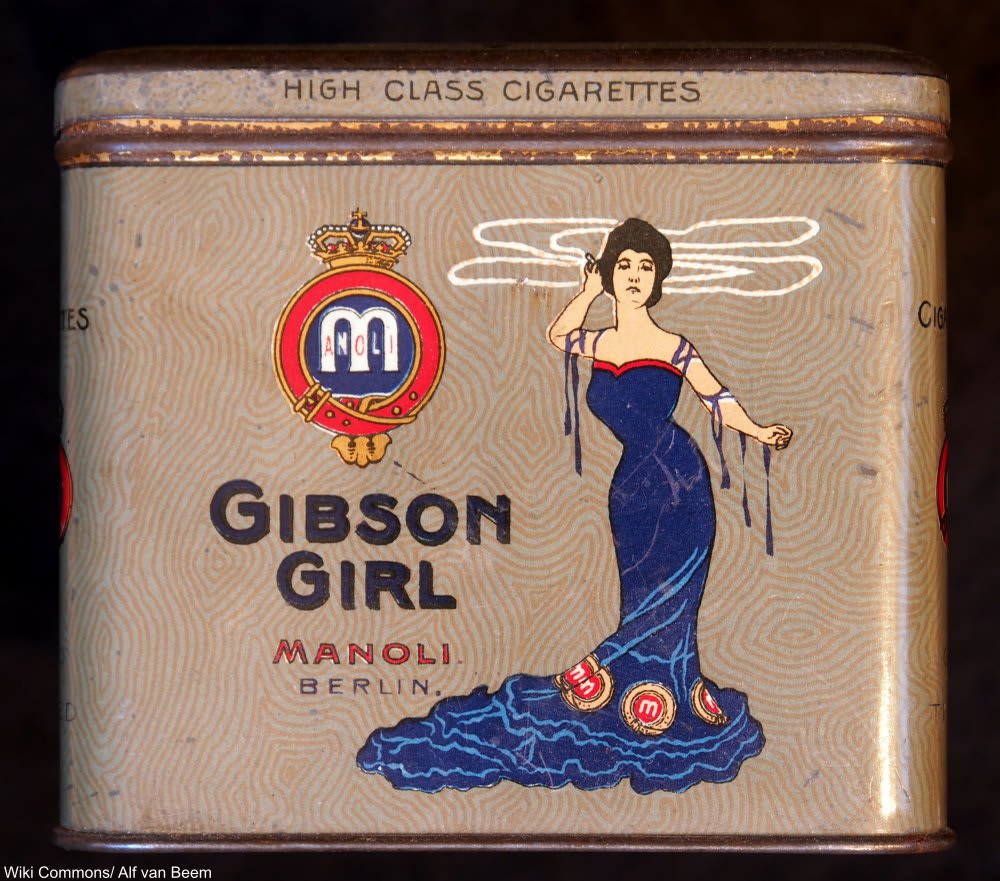 By the 1910-20s the phrase “Gibson girl” was already well-known around the world, as seen on this cigarette tin from the era. Via/ Wiki Commons

The real life Gibson girls of the 1910s: Click “Next Page” below!