If you were old enough to watch TV or read newspapers in 1962 then you undoubtedly remember the turmoil of the Bay of Pigs crisis. For nearly 2 weeks the world was gripped by the threat of nuclear war, adding a new urgency for many families to build and stock fallout shelters in case the worst actually happened. 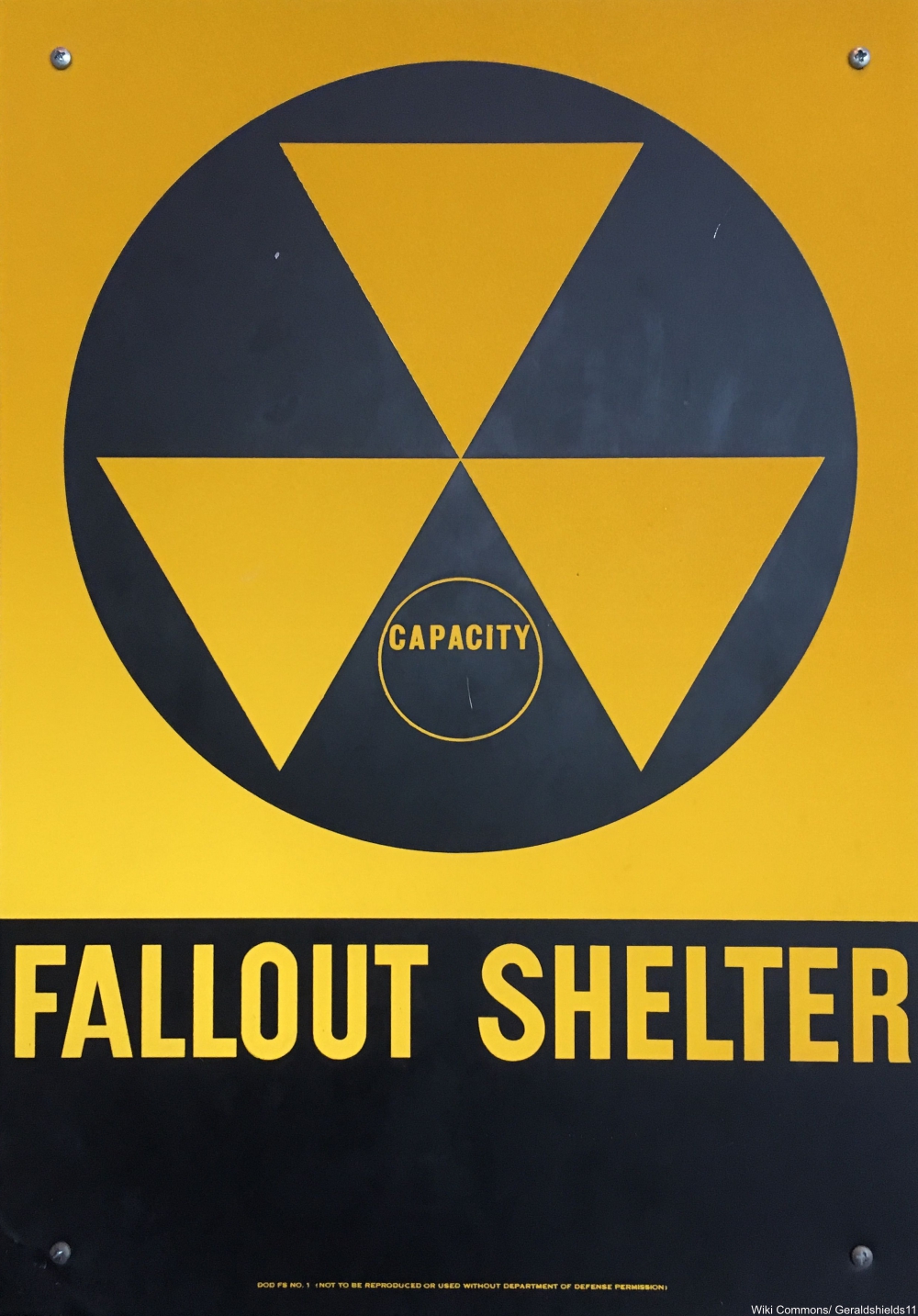 After tensions with Russia magnified during the Berlin Crisis in 1961. During this time President Kennedy gave speeches and went on record in LIFE magazine urging citizens to prepare fallout shelters if they were able to do so and promising that public shelters would be in the works. Only 1 year later the 13-day stand-off of Bay of Pigs ordeal sent the nation into a tail spin.

Planning for a shortage of food was not news to the U.S. as the government had been pushing the benefits of canning during WWII. And, advances in food preservation since the end of the war meant that stocking an adequate reserve of food and supplies was easily doable. But, during WWII U.S. families were not urged to build shelters as they would be during the ’50s and ’60s. 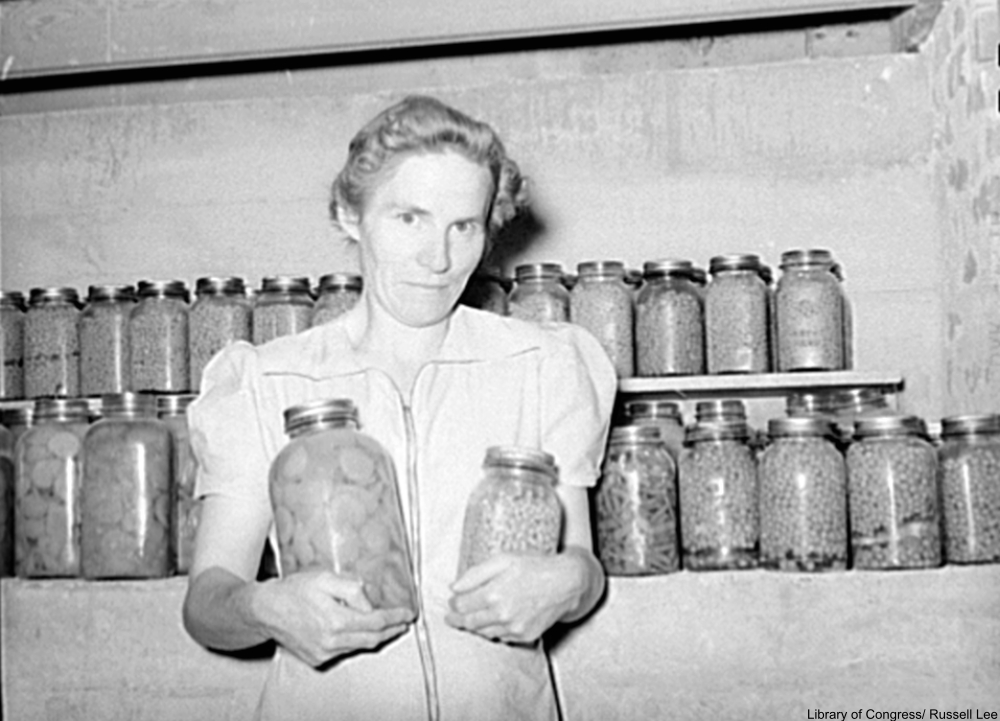 During the Cold War the threat of a nuclear blast strongly affected how many Americans viewed the future. Fallout shelters, where families could wait out the decay of radioactive matter from a nuclear bomb, were sold in kits, advertised in magazines, and built custom, often at great expense to homeowners. 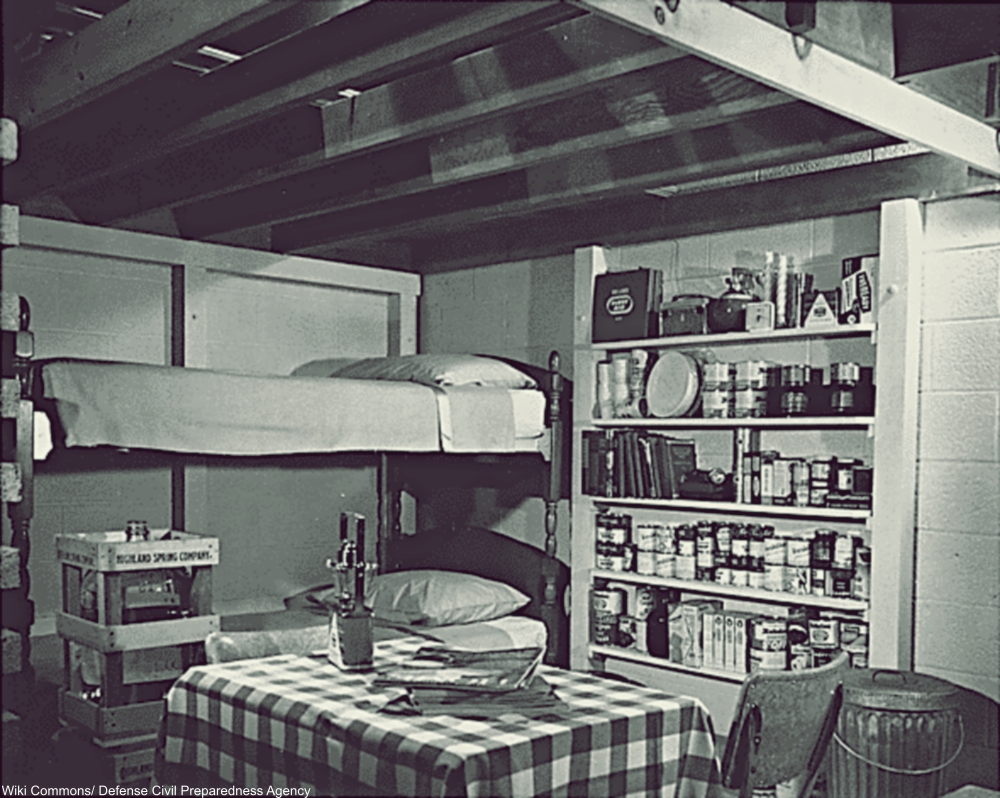 Duck and cover drills and Bert the Turtle taught us the right way to protect ourselves at school in case of an atomic blast and pamphlets were created by the U.S. government as early as 1951 describing very basic instructions for survival.

There was even a bomb shelter included in the 1962 Marx Toy Company metal dollhouse showing supplies all along the walls of the tiny room on the side of the Colonial style structure. Ax, cot, and other accessories were sold separately.

As companies got began to sell fallout shelter kits and supplies, the concept of living for an extended amount of time in shelters became profitable. The list of instructions and supplies grew to mammoth proportions, from the elaborate underground homes of the era to the sheer number of supplies now considered essential for a shelter.

Government pamphlets and magazine articles showed underground rooms filled with canned food, extra clothing, flashlights and batteries, games, and a host of other items depending on the size of the shelter. 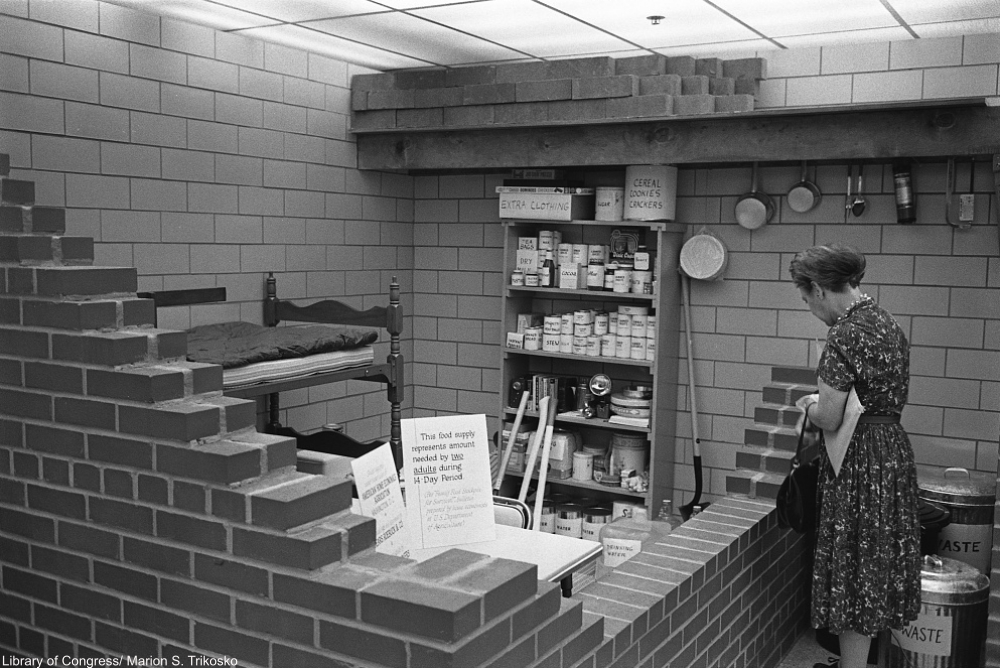 Exhibit fallout shelter and supplies, 1961. Via/ Library of Congress

The often-tiny spaces were stocked as much as space would allow, with smaller and less expensive shelters only holding enough food for a week and larger shelters like the secret one below the Greenbrier Hotel holding enough supplies for dozens of people to survive for months. 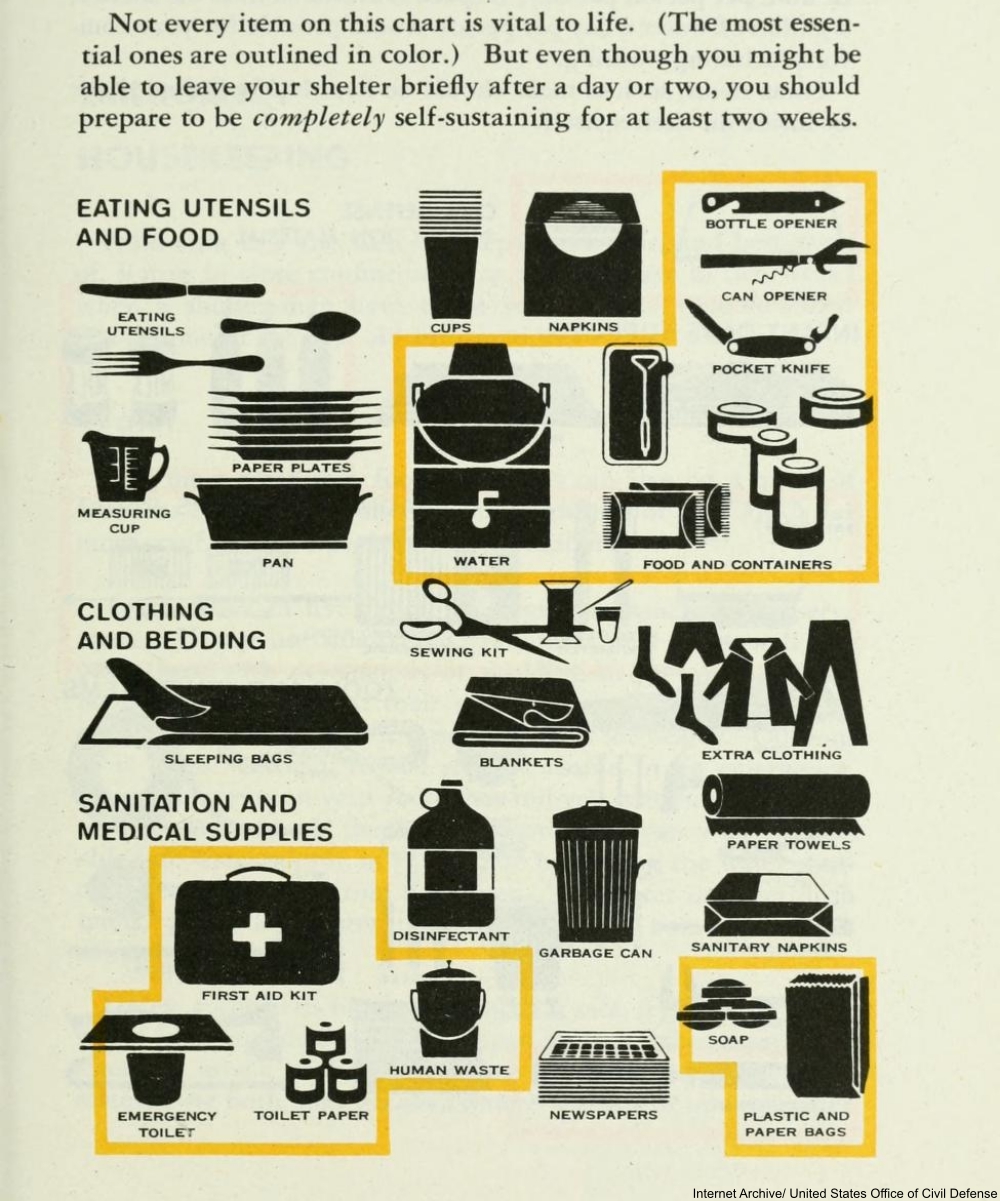 The United States Office of Civil Defense issued many publications on the subject of preparedness. Among them the was 1961 pamphlet, Fallout Protection : What to Know and Do About Nuclear Attack, which outlined how a nuclear crisis might go down and how to build small shelters with basic supplies.

The supplies illustrated are all considered useful, but those outlined in yellow are considered essential and include dosimeters for measuring radioactivity and at least a quart of water per day per person. 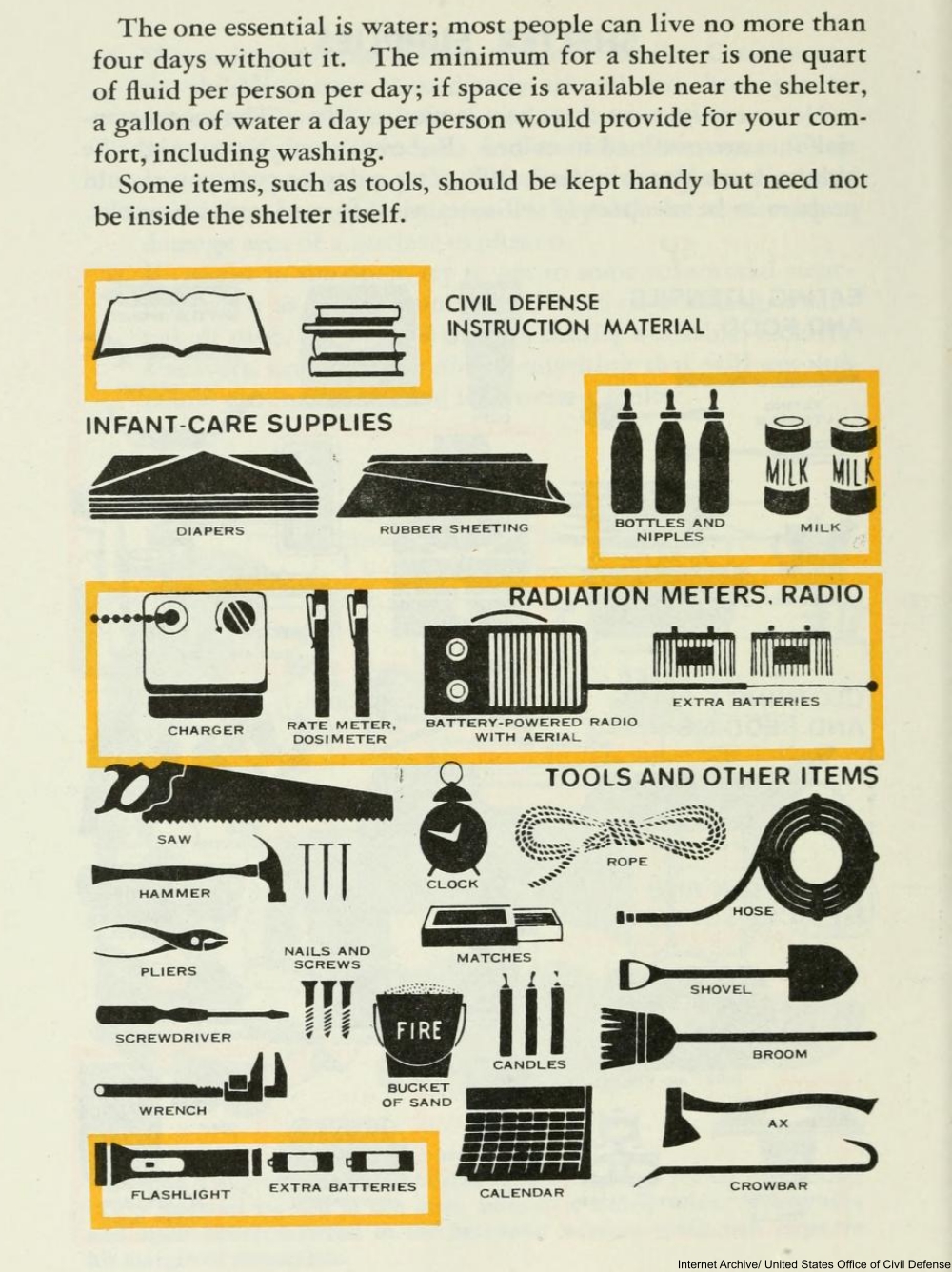 The idea was that even if you were authorized to leave your fallout shelter within a few days, that you might need to live off the grid for 2 or 3 weeks, which would mean having access to a range of tools and supplies as well as food.

Pamphlets on nuclear blast survival were still being published in the late ’60s and beyond, but the Nuclear Test Ban Treaty of 1963 and the de-escalation of the Cold War simultaneously made ordinary folks less concerned with nuclear attack while also lessened the chances of such a thing happening.

You can read about one of the most extensive underground bomb shelters of the ’60s right here!