From Bathing Outfits to Bikinis, Have a Look at The Evolution of Swim Wear

From modest wool affairs to the ever-popular bikini, swimwear has changed a lot in the past 100 years. Modesty laws governed what could and could not be worn on public beaches for decades, while fashion marched ahead, hoping the laws would catch up with the evolving styles. From an outfit with shoes and accessories for women to the free and easy styles we’ve come to love, have a look at how the swimsuit has changed with the times. 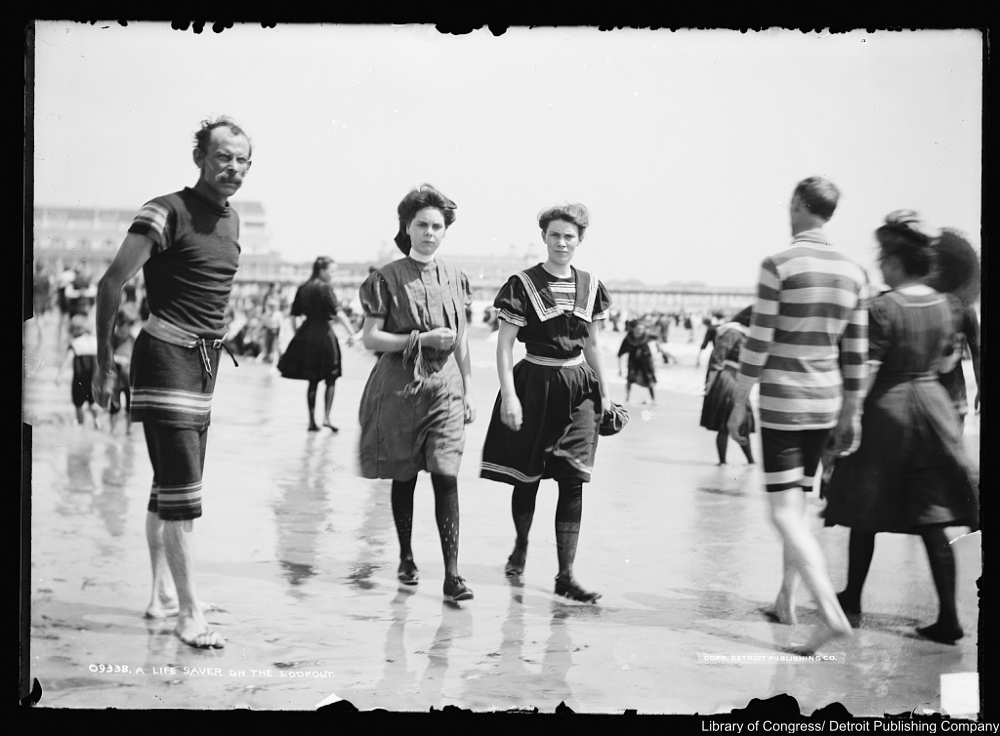 The late 1800s saw an increase in leisure time and social mixing between the sexes. Outfits to wear on public beaches became fashion statements that required mobility and modesty at the same time, though men and women were expected to wear quite different swimwear. Men wore a two piece outfit that resembled a shirt and shorts, made of wool, in either a tank style or short sleeved. Women on the other hand had a full-on swimming ensemble! A knee-length dress with shoes, stockings, and sometimes a hat, parasol, or other accessories was the order of the day. Many women refused to get into the water for fear of appearing immodest in the strict Victorian-era atmosphere of practical values by showing themselves in swimwear. Those who did would be saddled with a heavy wet wool dress by the end of the day! 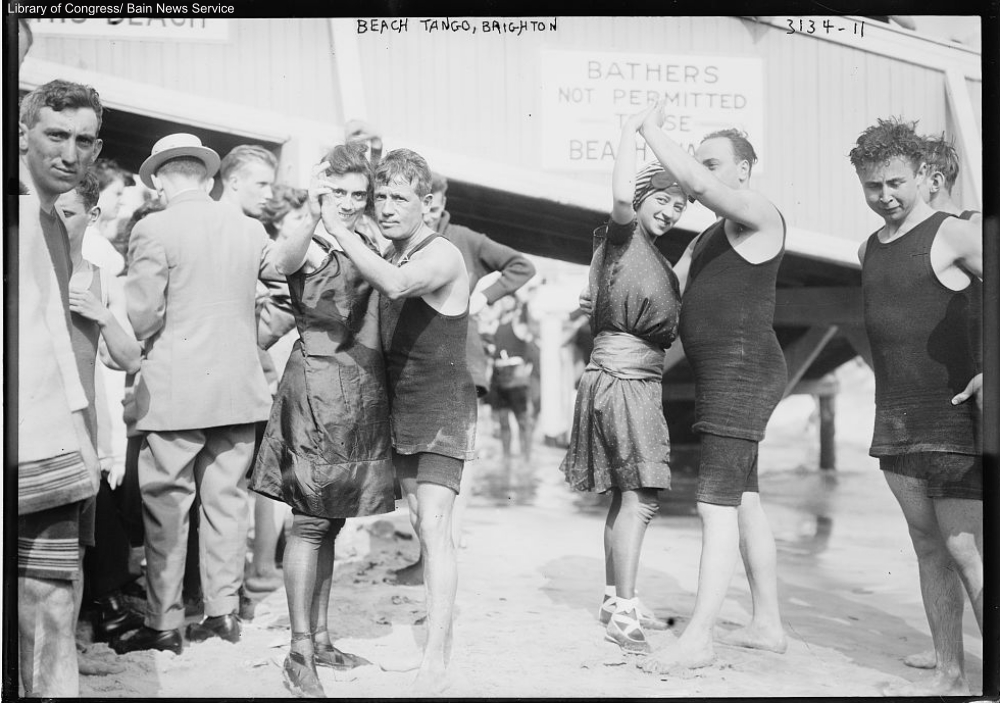 Only a few decades later, both men’s and women’s bathing suits became more scant with tank tops the new standard for many swimmers and sun-bathers. But, women were still wearing stockings at the beach for the most part. It was considered scandalous for a woman to show her bare legs on a public beach and fines could be levied against women who ignored the laws. Since the laws varied by location, and private beaches were not affected, some women did bare their legs by this time. 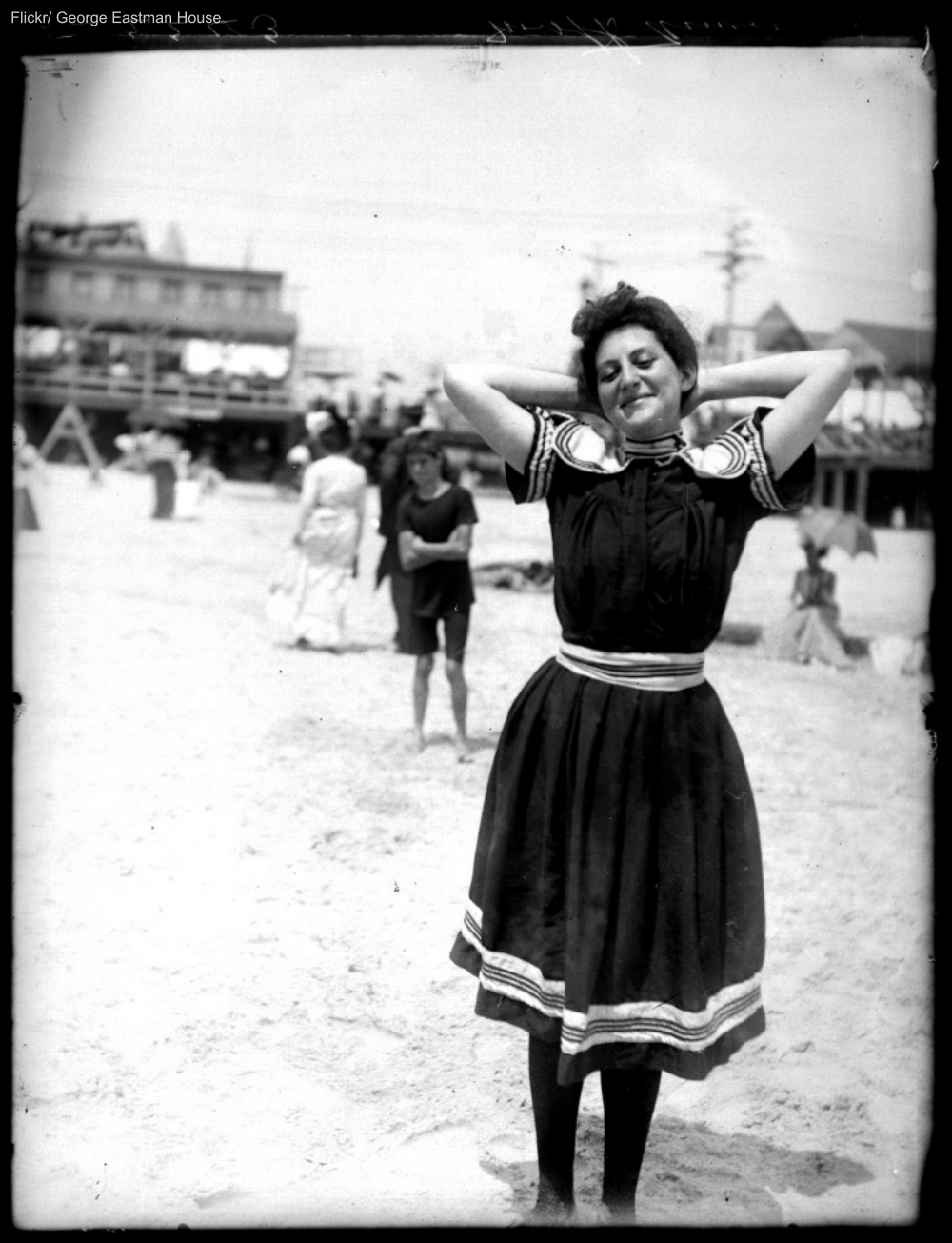 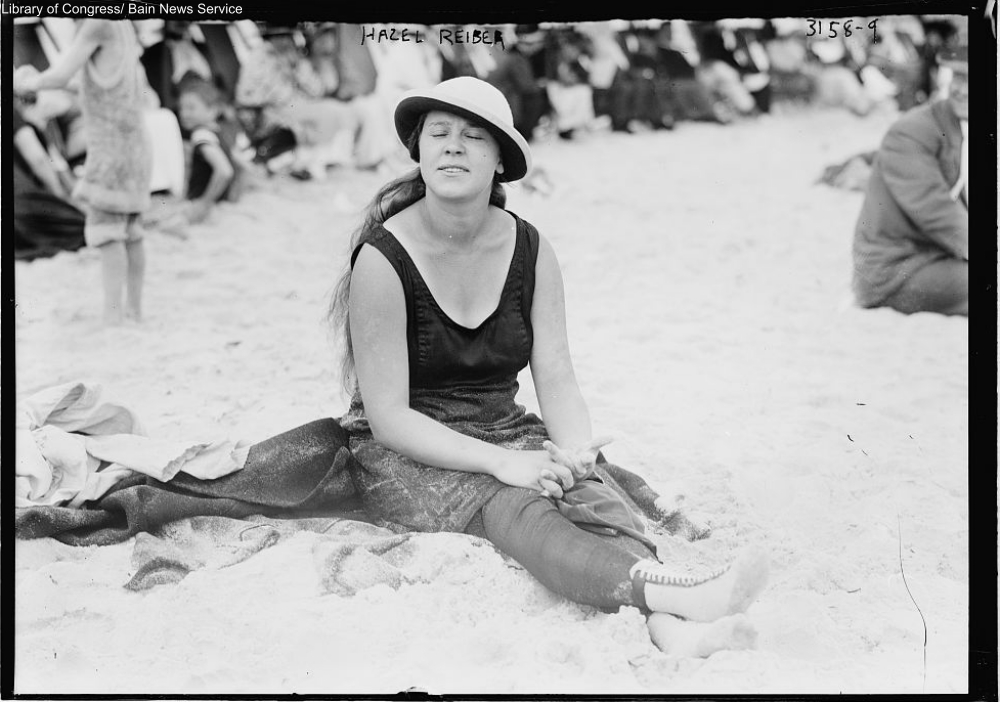 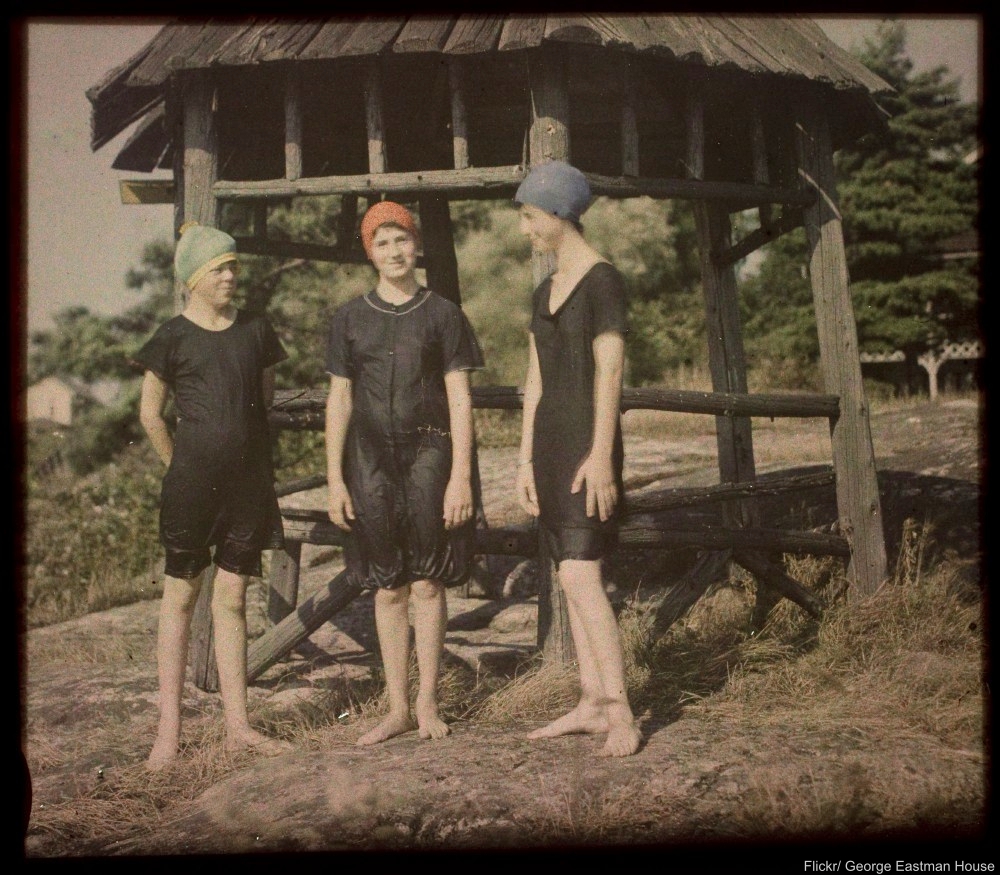 In the late 1910s and early 1920s, abbreviated union-suit-type garments for men and women begin to appear, with various sleeve lengths and degrees of tightness. 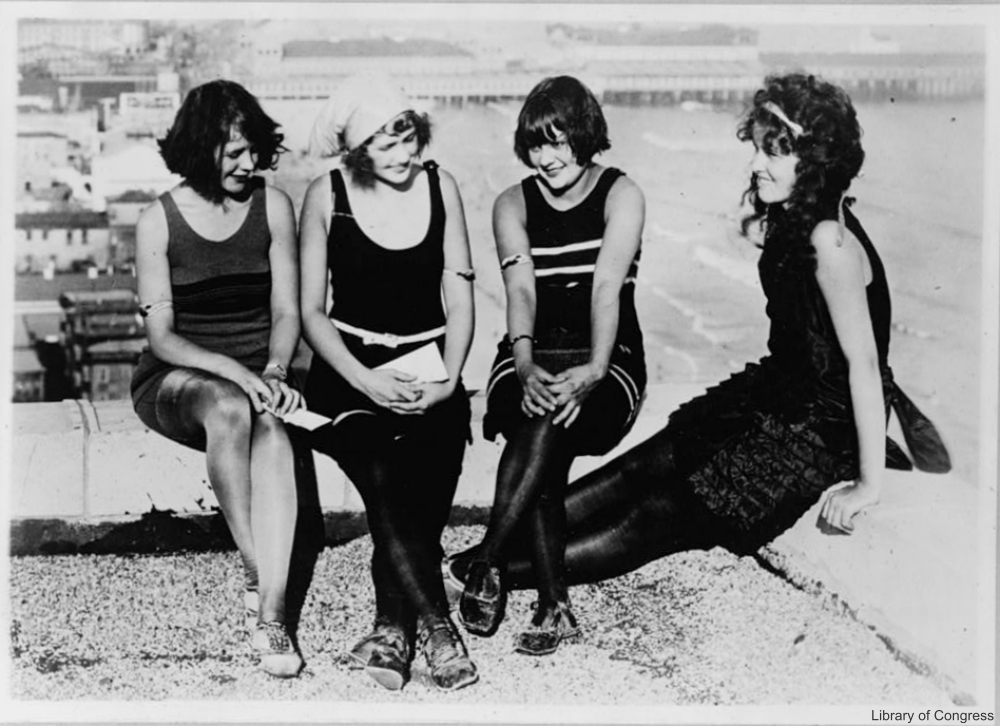 In the 1920s, fashionable young ladies could be seen in a variety of elegant swimwear, both suits and dresses. The flapper style made it all the way to the beach, but bare legs were still a taboo at some beaches. Notice these chic young women are still wearing stockings on the beach for modesty. 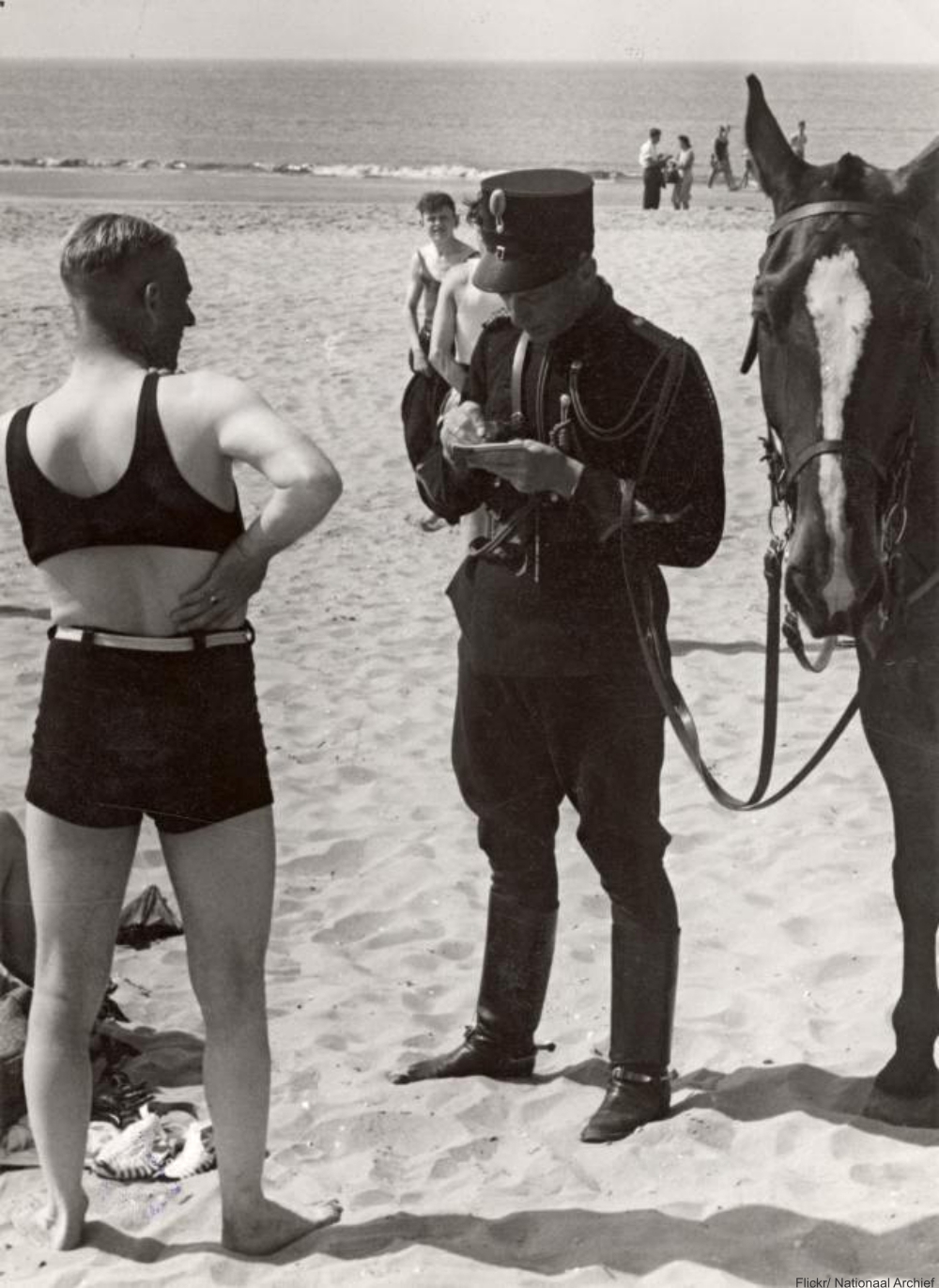 In the 1930s, the streamline style and modern mindset spawned innovations in swimwear that led to tighter suits, patterned suits, or those with cut-out patterns. This man is getting a ticket for indecent appearance from the not-quite-bikini he’s wearing. Even men had to observe modesty laws and the world was clearly not ready for the two-piece quite yet.