12 Costume Jewelry Trends That Were Incredibly Popular Years Ago

There was a time when costume jewelry was very bold, yet very tastefully done. Back then, along with a woman’s hat and gloves, they signaled her style to the world in a way that went beyond her clothing or her lipstick. New techniques in the 1930s-1960s meant that of wide range of looks could be produced at department store prices.

Some of the big names in costume jewelry during this time were Trifari, Coro, Miriam Haskell, Sarah Coventry, and Weiss, though many other brands competed in this arena as well. This period was truly the heyday for costume jewelry. In those days an outfit wasn’t complete without a little bit of costume jewelry to add sparkle. Here are 12 jewelry trends from the era that most of our mothers and grandmothers probably wore at some point. 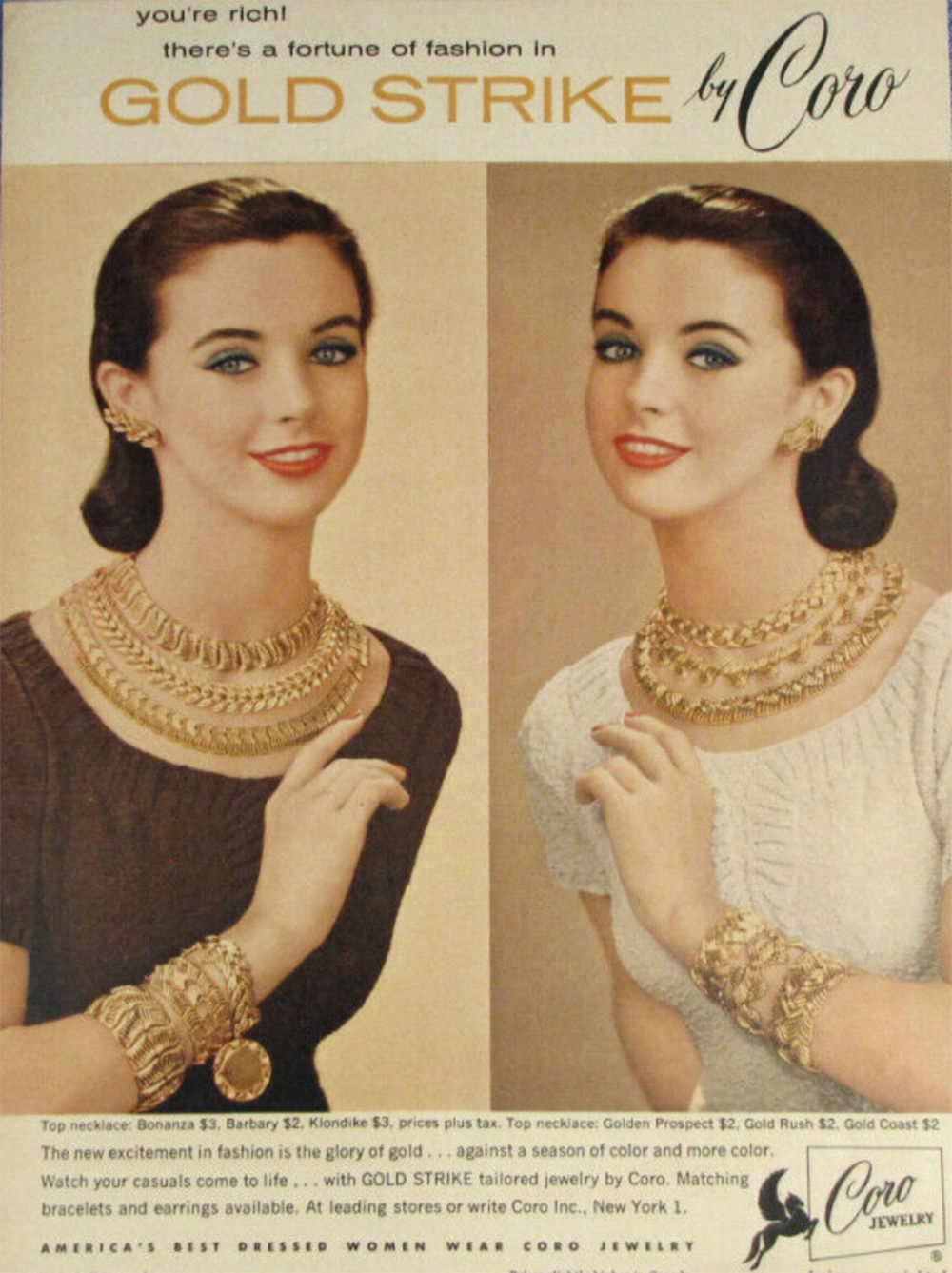 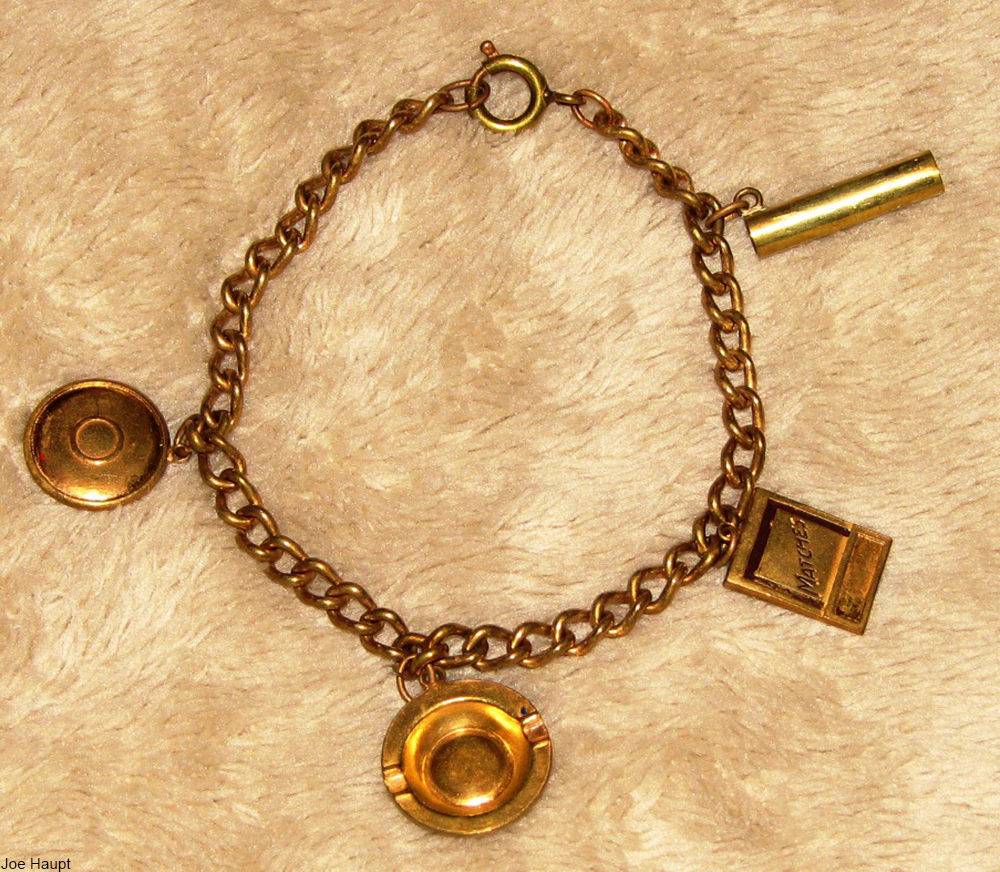 For decades the charm bracelet was a ubiquitous piece of jewelry that most women had in their jewelry boxes. They could be themed (like the smoking bracelet above) or they might have been filled with a single souvenir charm from each place a woman had been to. Elizabeth Taylor was among the many fans of this style of bracelet. 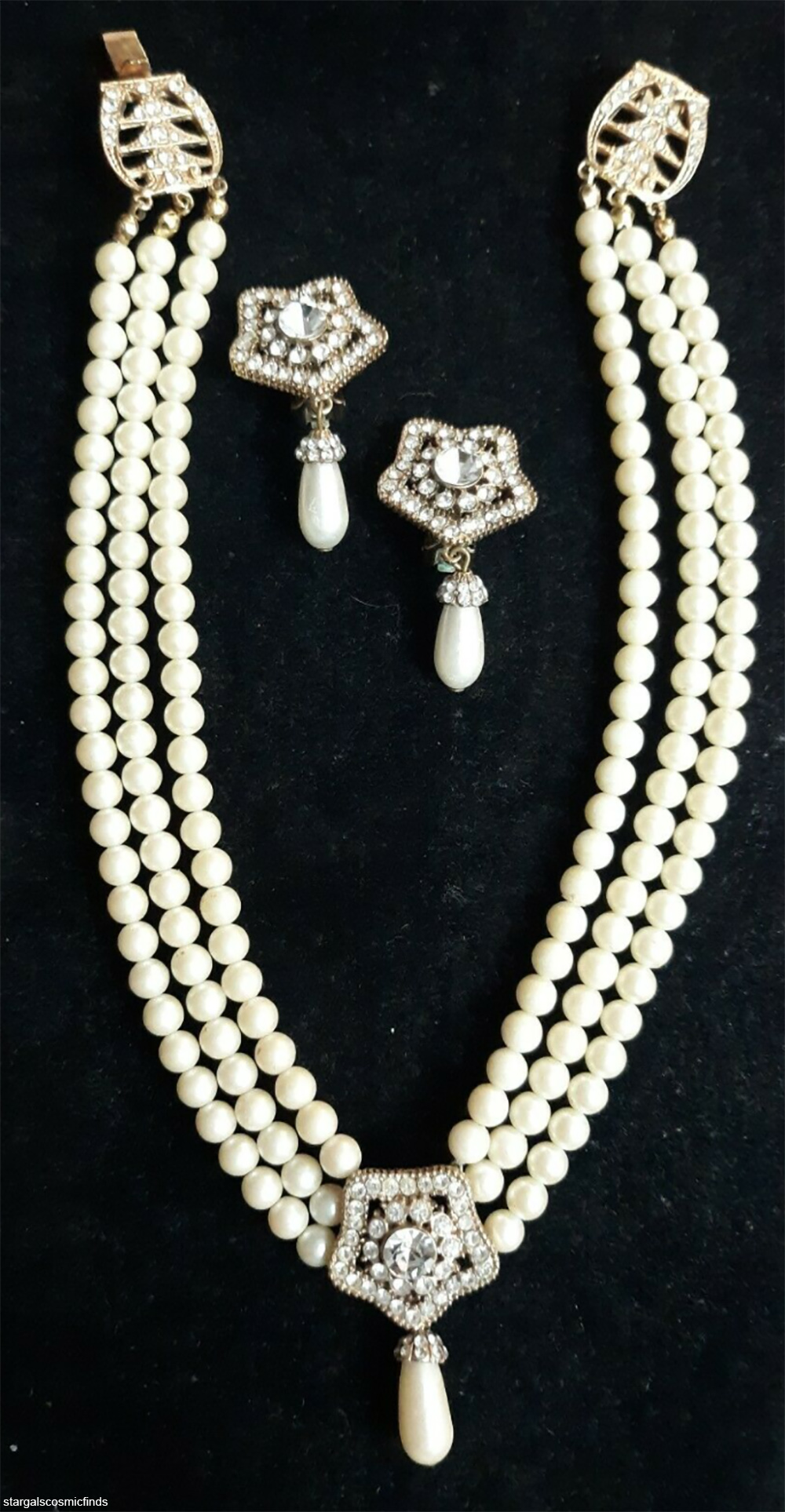 One of the biggest trends that women followed back then was to wear matched sets of jewelry. A full set might include earrings, a necklace, a bracelet, a brooch, and sometimes a ring or other item as well. She might not wear every piece at the same time, but this kind of jewelry wardrobe gave her options. The brooch might be worn on the jacket of her winter coat, but not get used in the summer months when perhaps the necklace became the star of the show. Today, people are much less concerned with being matched like this, but it was once de rigueur. 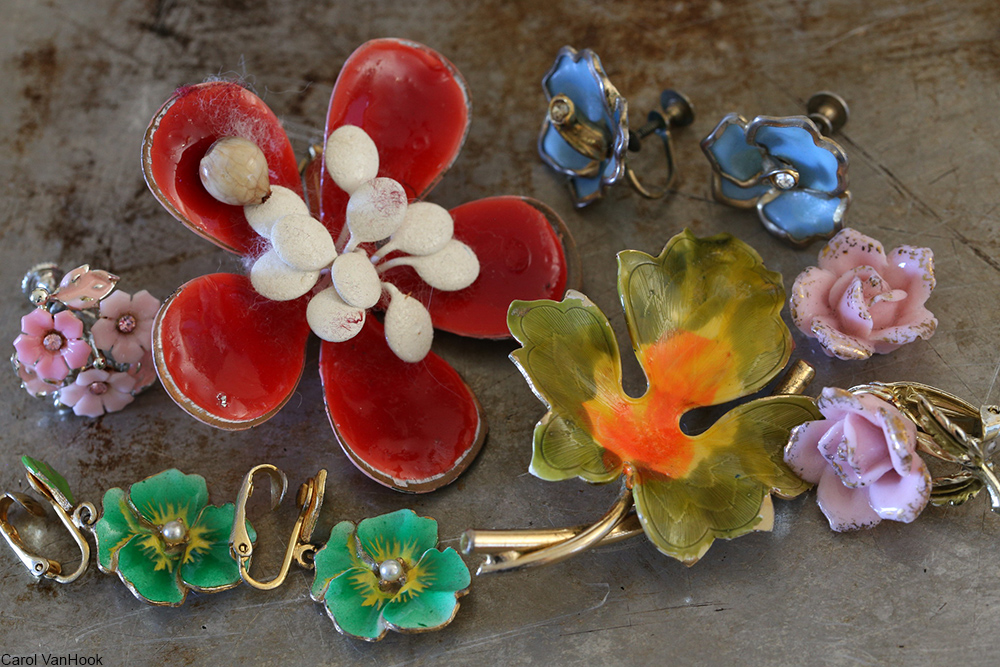 One of the biggest trends in fashion jewelry were enameled flowers. This technique could be found on everything from earrings to brooches to necklaces and rings. The brilliant colors and durable finishes made them a classier version of some of the plastic jewelry that was flooding the market at the time. 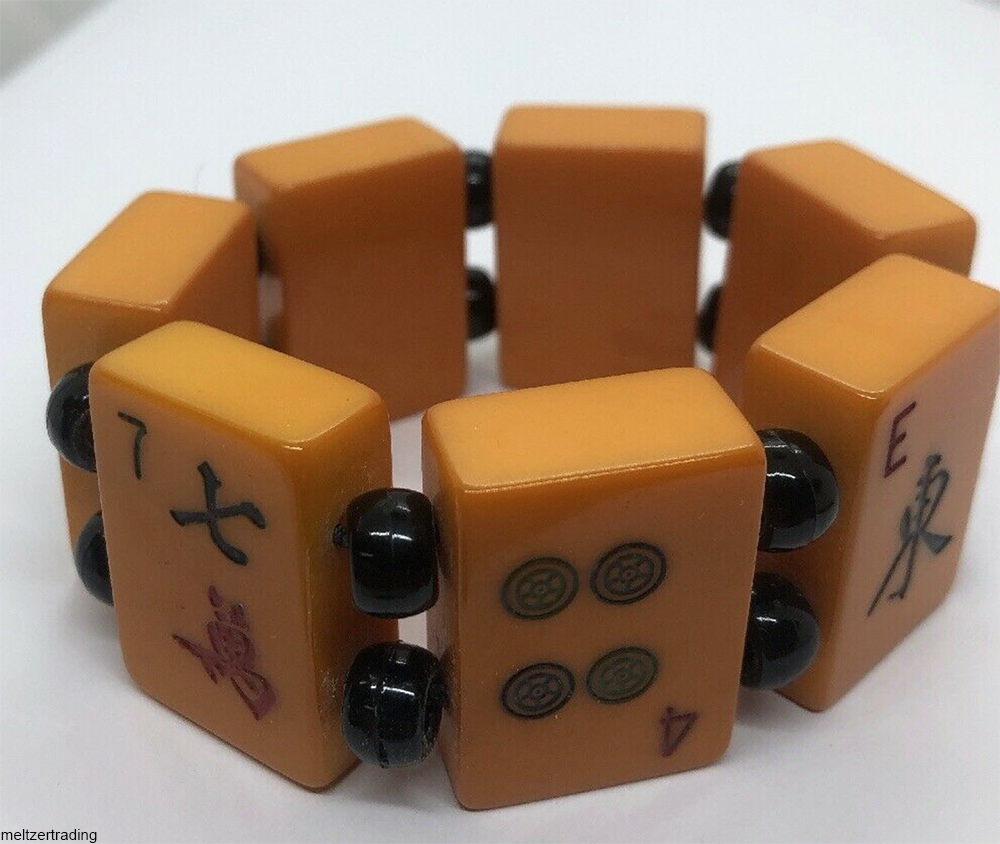 From the 1930s to the 1950s Bakelite could be found in any number of consumer. Telephones were made of this early plastic, as were light switches, tool handles, brushes, buttons, and jewelry. Today Bakelite jewelry is some of the most collectible vintage jewelry around. Asbestos was used as a filler in some of these pieces, which means that restoring the outer layer, which can change color or darken over time, can be hazardous. Perhaps the danger is part of what makes the pieces so desirable. 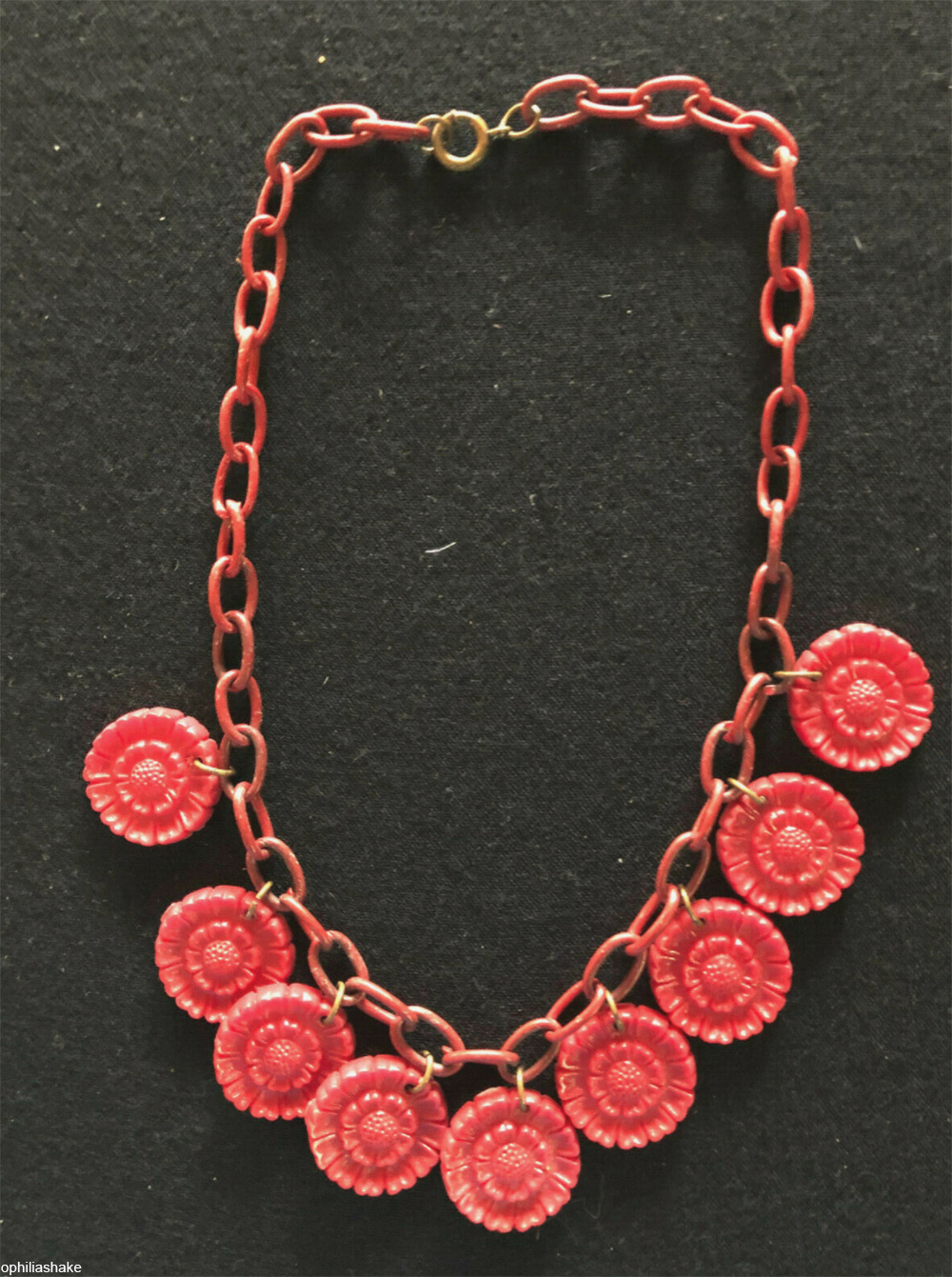 Celluloid, another form of early plastic, was a common jewelry material for a number of years. Like Bakelite, other good were made from it, like powder boxes and items of home decor such as cutlery handles. Early film was also made from celluloid and this caused a great deal of trouble when it was realized that the material was actually extremely fragile and flammable. Not as much celluloid jewelry survives for this reason, as the material is easily damaged by solvents and oils, like those found in perfumes and lotions. 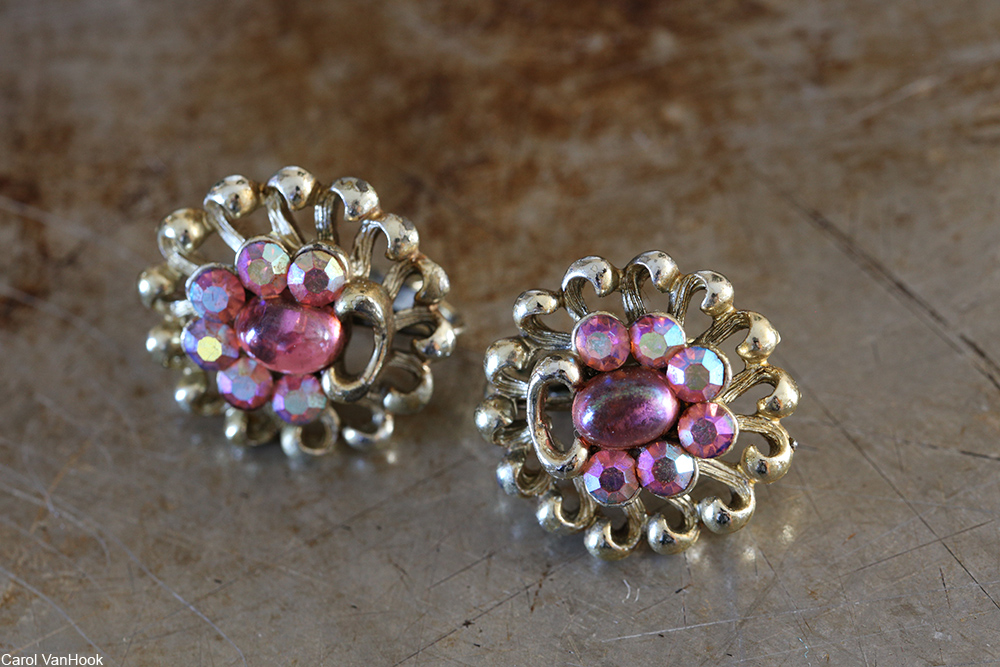 Glass rhinestones had been popular since the 1800s, but in 1956 Swarovski came out with their Aurora Borealis line in which each tiny gem was coated with an iridescent rainbow finish. The result was a mesmerizing effect that many costume jewelry makers wanted to immediately copy. This remains some of the glitziest costume jewelry available. 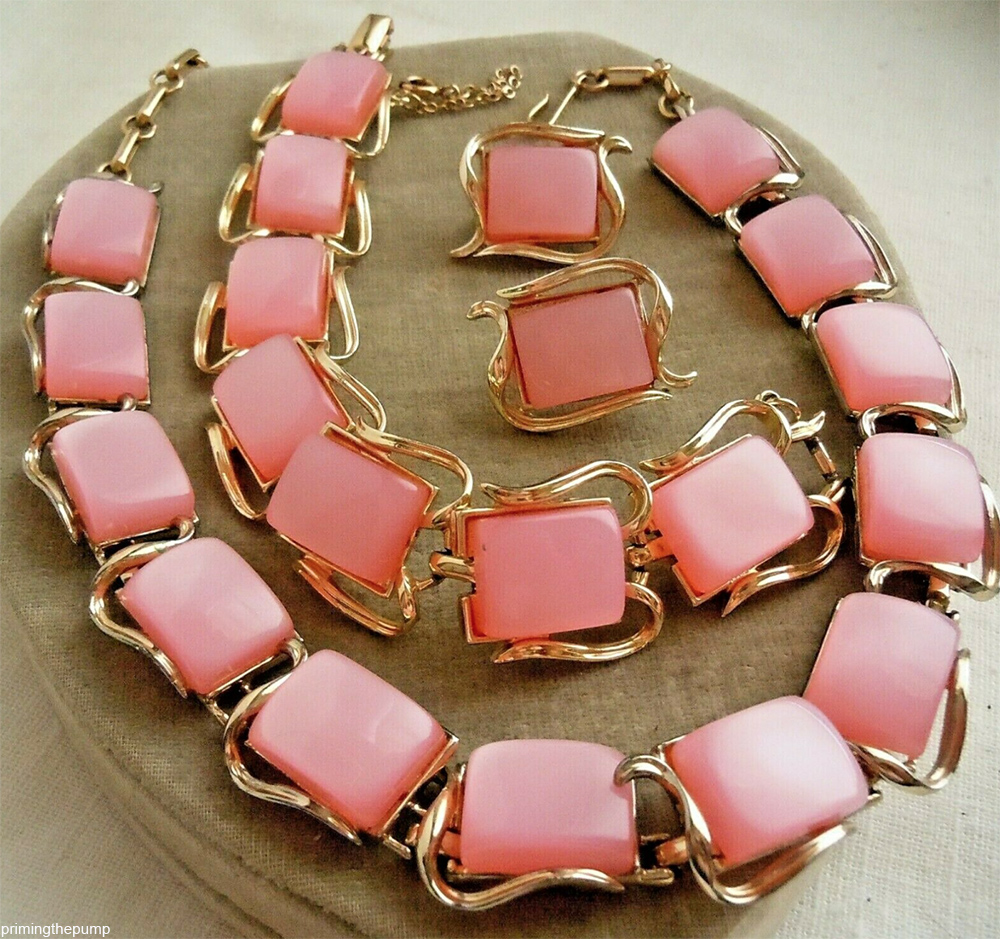 Moonglow costume jewelry is made from acrylic (Lucite) that has shimmering pigments and fillers added to it. This gives the pieces a depth and color shift not found in other kinds of materials, similar to the way that moonstone (sodium potassium aluminum silicate) shifts color when viewed from different angles. Not only was Moonglow cheaper to produce than gemstone jewelry, it could be made in any color imaginable, giving a women a lot of choice of which colors to buy. 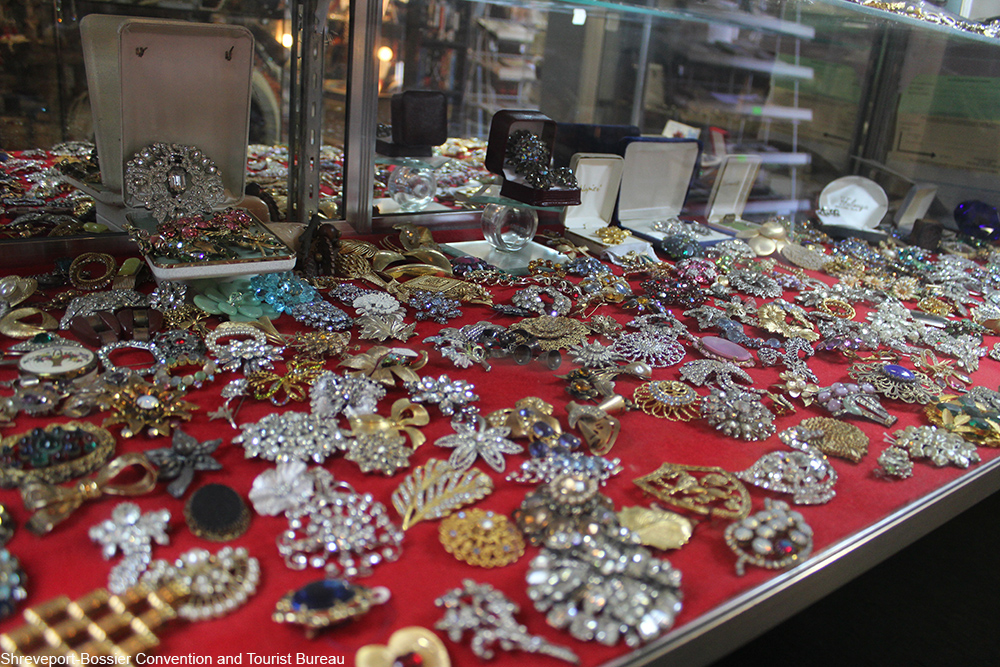 Today we don’t wear nearly as many brooches, but they were once a staple of every woman’s jewelry trove. Even in fairly humble households the women would have had at least one or two brooches for wearing on Sunday. Today, many of our clothes are not well-suited to wearing brooches, especially those that are very heavy like the ones so popular in the old days. Pierced ears did not become a trend until the 1970s and 1980s and brooches were a more comfortable alternative to clip-on earrings. 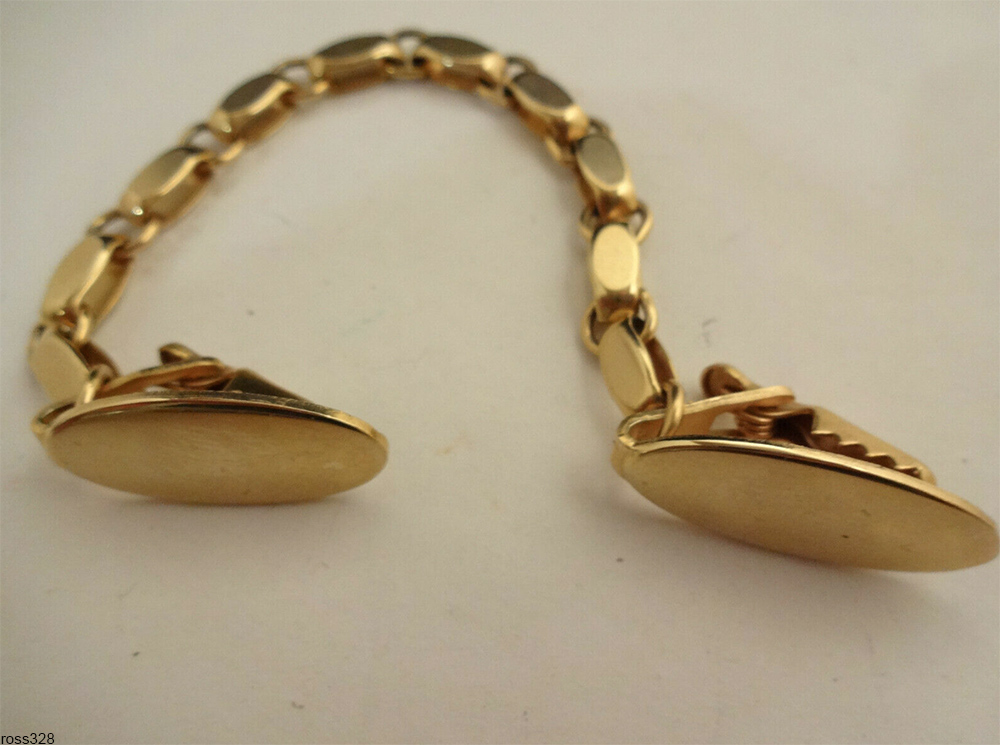 In the 1950s in particular cardigans were extremely popular. When the temperature changed throughout the day, it became common for ladies and girls to drape the cardigans over their shoulders, arms out. This led to some dropped sweaters and the solution was a rather elegant piece of jewelry: the sweater guard. With a decorative clip on each end connected by a strong chain these gadgets did double duty as functional pieces of jewelry. 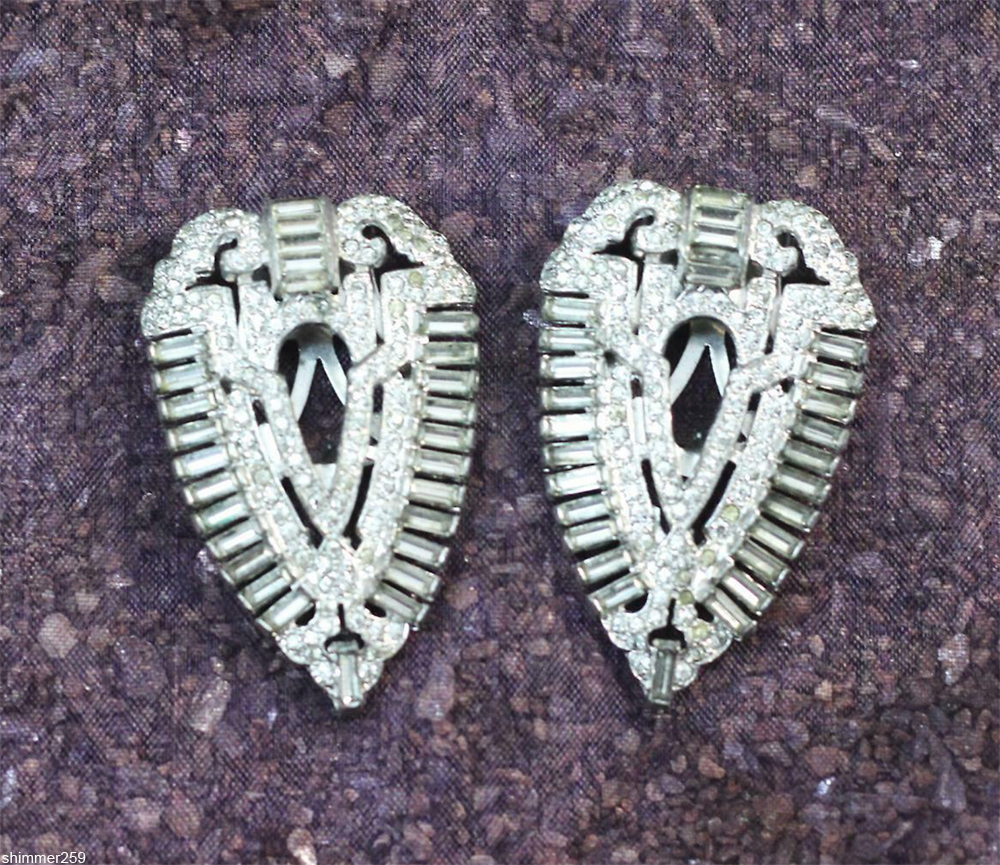 Before sweater guards were all the rage, ladies liked to dress up their outfits with dress clips. These were just like shoe clips and just added a bit of glitz to very plain dresses. Dress clips were particularly popular in the 1920s, a decade which also sparked the little black dress. Obviously some people thought this new style of clothing could use a little help, preferably in the form of rhinestones. 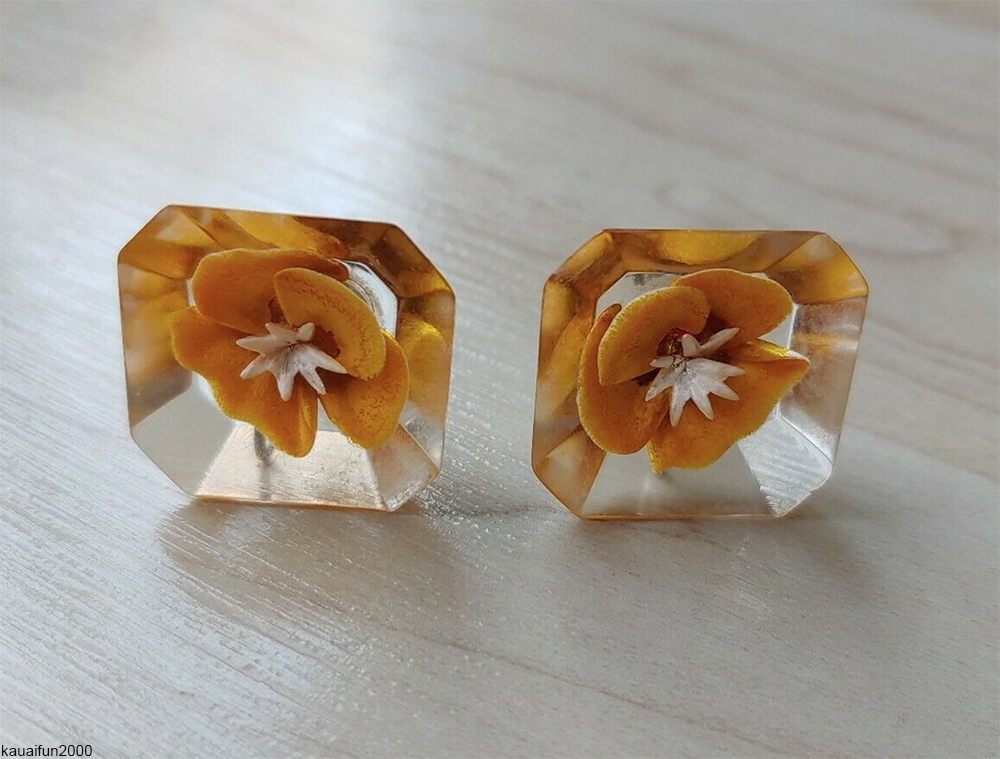 Lucite was another plastic product that gained popularity in the 1950s and 1960s. Known for its durability and clarity, many pieces of jewelry are still made from Lucite, which is an acrylic plastic. For a time in the 1940s-1960s these clear pieces were carved on the underside, most often in the shapes of flowers. This style of jewelry recalled the camphor glass jewelry of the 1920s and the intaglio style rings that had been popular in Europe for centuries. 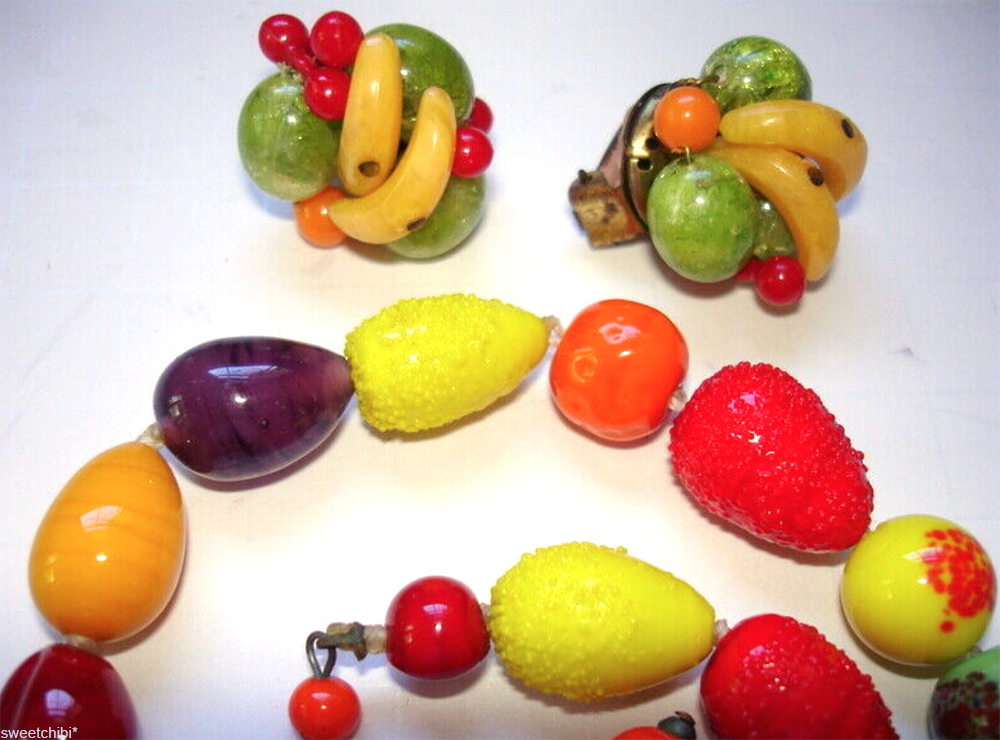 The Good Neighbor policy that the U.S. adopted favoring the South American countries (and Central American and Mexico) during World War II meant that anything Latin, from music to fashion, was en vogue during the 1940s and 1950s. Brazilian beauty, Carmen Miranda, was one of the most famous actresses of the day and her fruit hat costume for The Gang’s All Here (1943) and over-the-top jewelry made flamboyant “fruit salad” jewelry quite sought after.