Abandoned Historic Chapel Looks Like Something from Sleepy Hollow

The historic chapels of New England all seem to have a similar feel – very much like the Old Dutch Church in what was once known as North Tarrytown (now named after the book which it inspired, Sleepy Hollow). The sloped roofs, exposed woodwork, and gothic revival windows harken back to a time in the 1800s when the church was integral to the daily goings-on of the community. In one such church, sat abandoned for decades, the effects of time can be clearly witnessed. 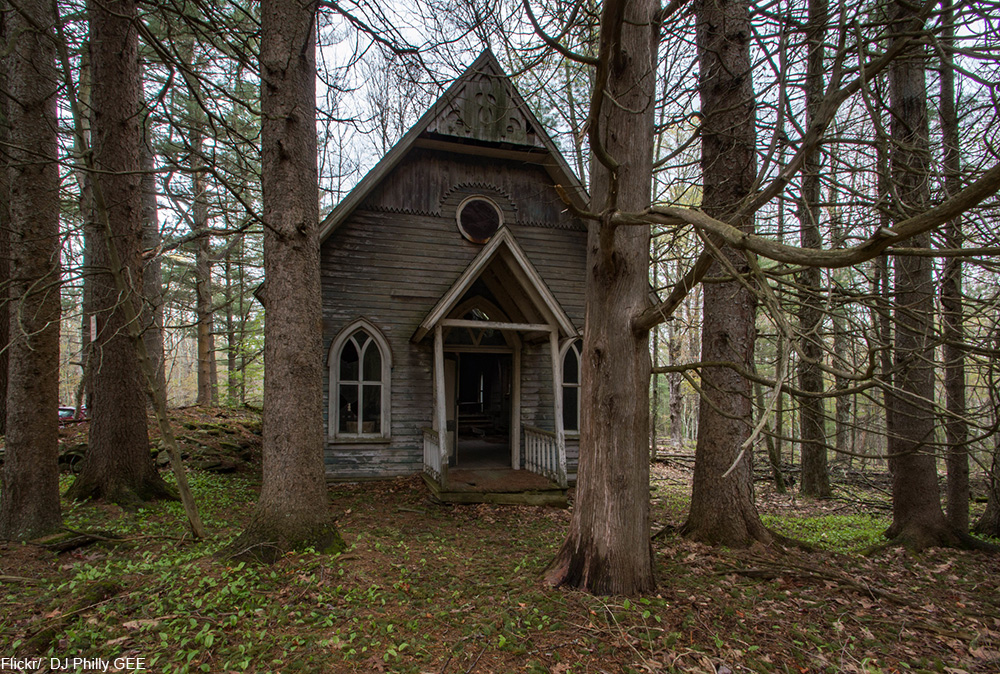 Various random chairs and other artifacts left inside the small chapel appear to be from the 1960s, which may have been the last time that it was used for any purpose at all, let alone church services. But, the charm of the arched windows is still quite evident, even amongst the ruin and decay. 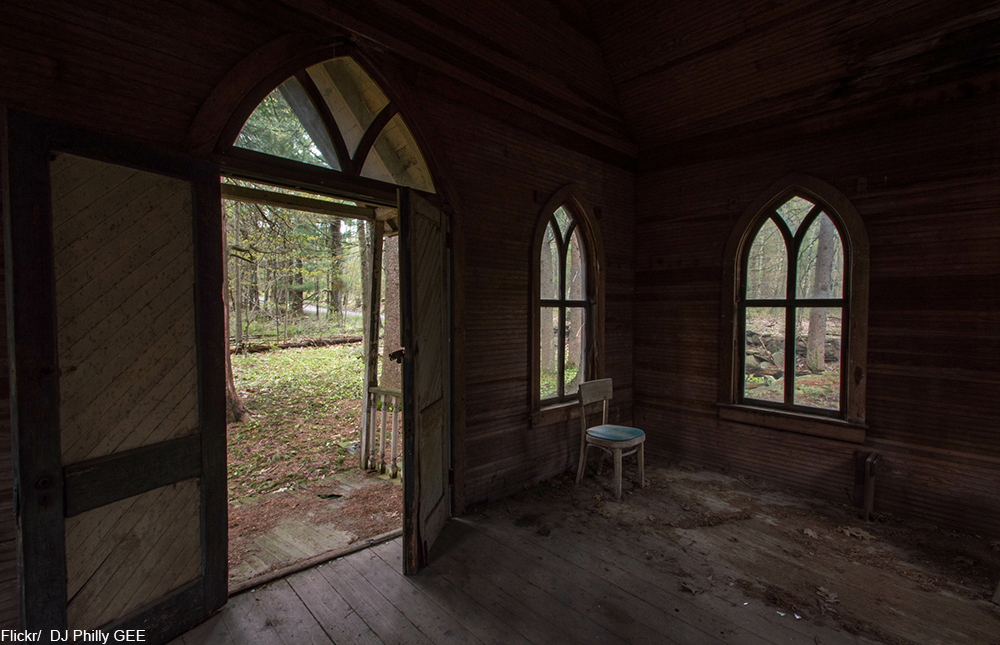 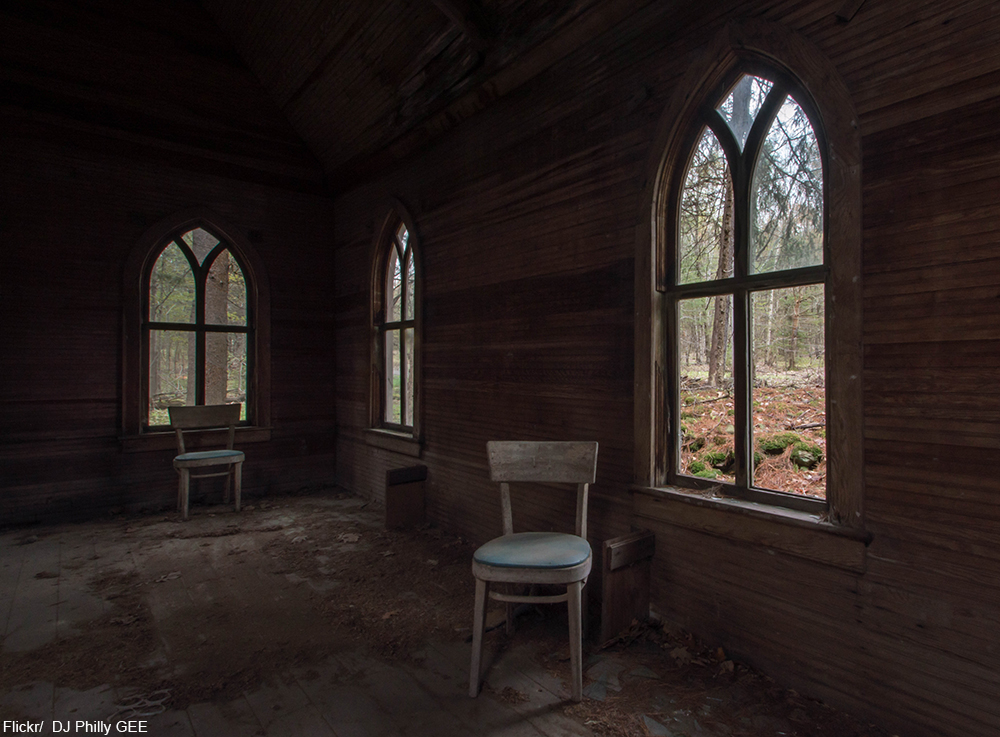 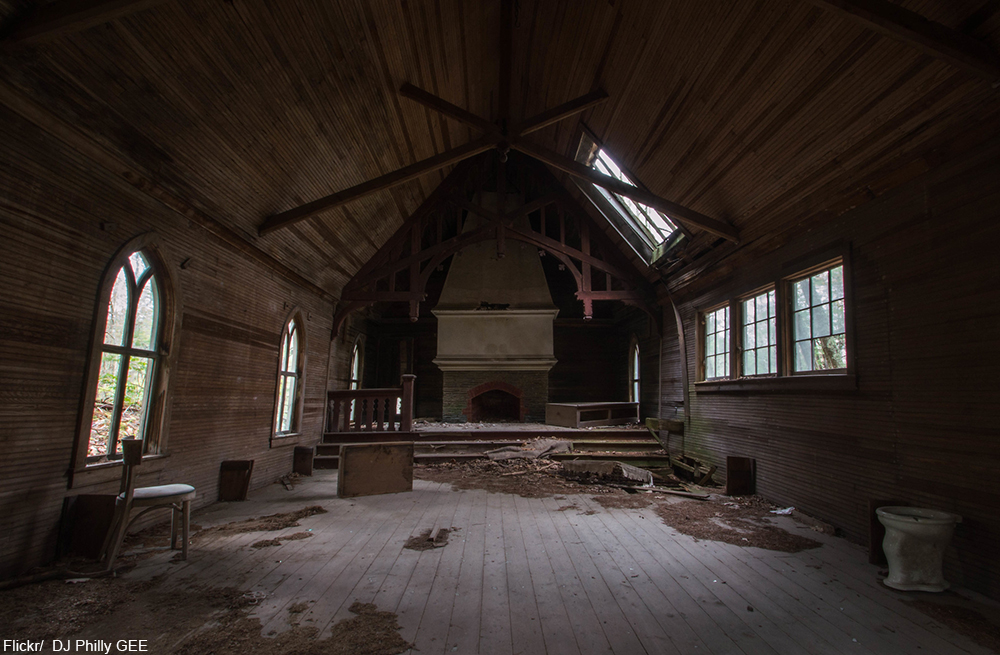 As with many urban explorations, we don’t know the exact location of the chapel and that’s probably just as well for the sake of the building. But, there is also a nearby lodge, which also seems to have been abandoned around the same time as the chapel since the furniture inside is very clearly from the 1960s as well. The photographer calls them the Frost Mountain Chapel and Lodge. 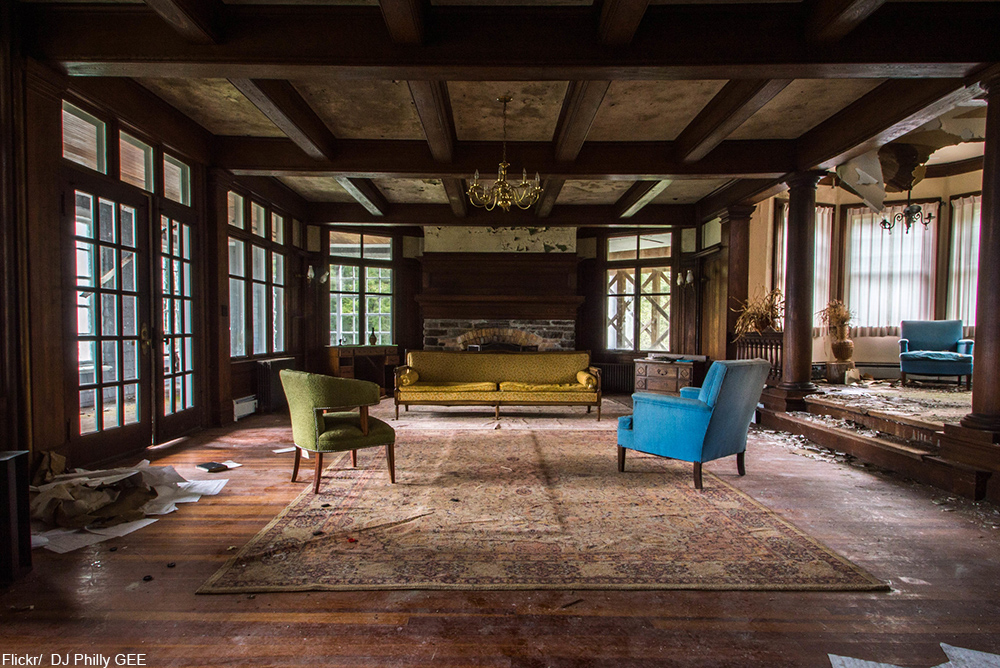 The sitting area in front of the fireplace still looks quite inviting, with the bright upholstered furniture and sumptuous rugs adding a sense of style that rivals any decorating spread today. 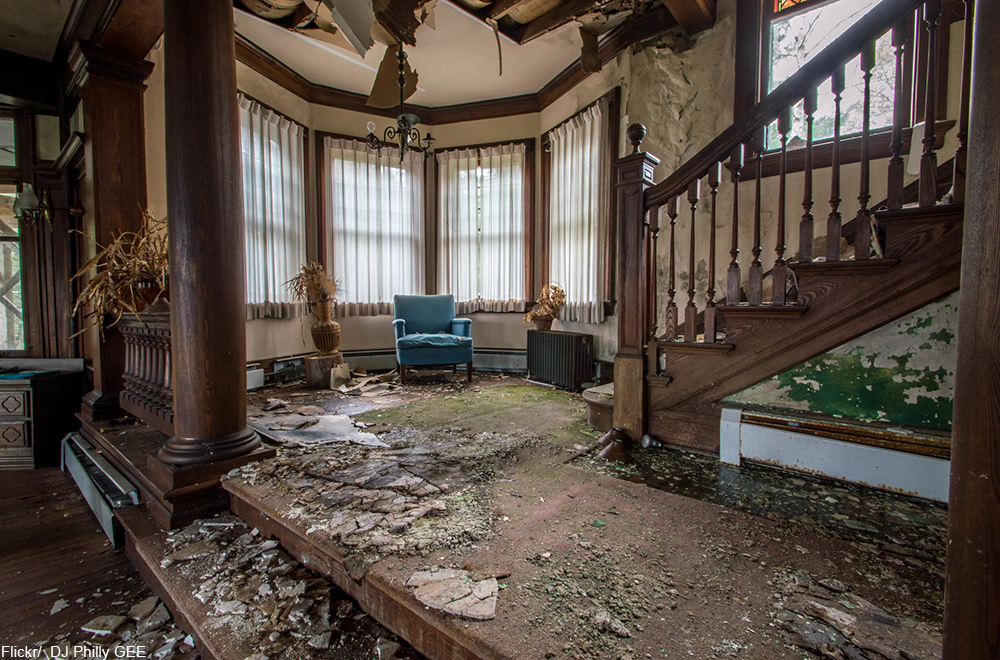 Many aspects of the lodge look very much in the style of the 1910s, like the beams over the sitting room and and French doors leading to an airy sunroom. This main room was probably often heated by the fireplace. We can see old fashioned radiators were later supplemented or functionally replaced by baseboard heating, another very common mid-century interior innovation. 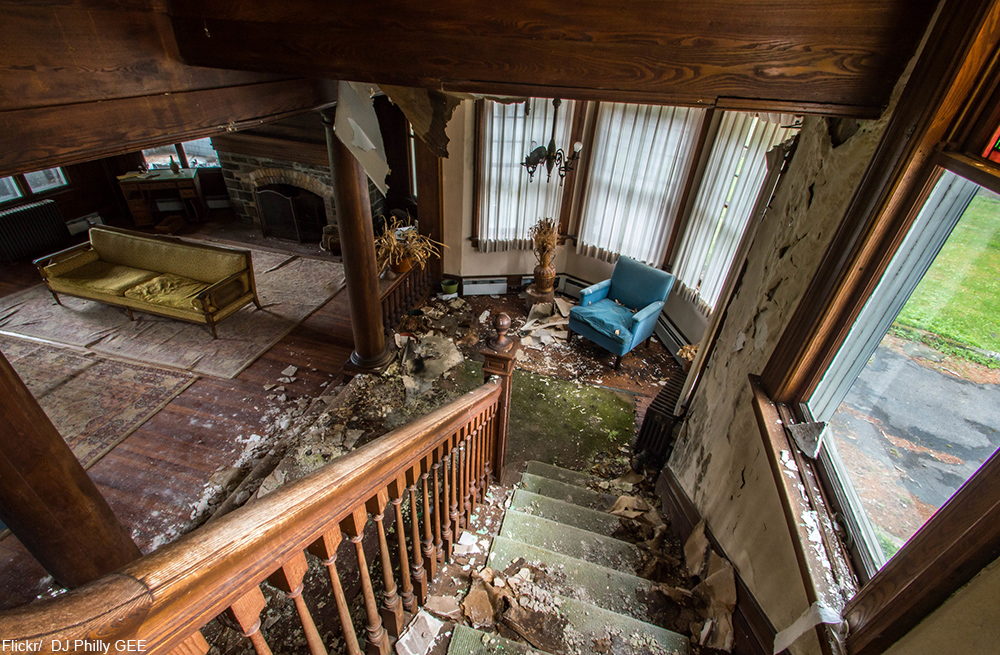 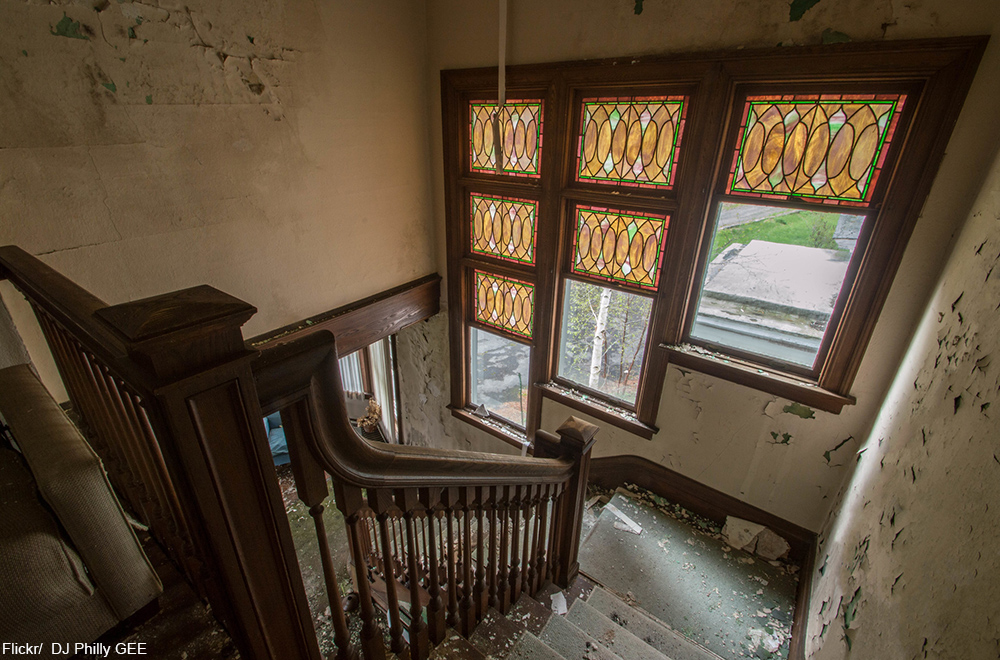 The wooden staircase with beautiful railings, illuminated by stained glass windows, looks like it would have been a glorious sight to see in full working order with the light pouring in. Once up the stairs drooping wallpaper leaves no questions about the state of the building. But, we can imagine this was a fine place to stay many decades ago. As with the other rooms, the objects inside the bedroom look distinctively 1960s. 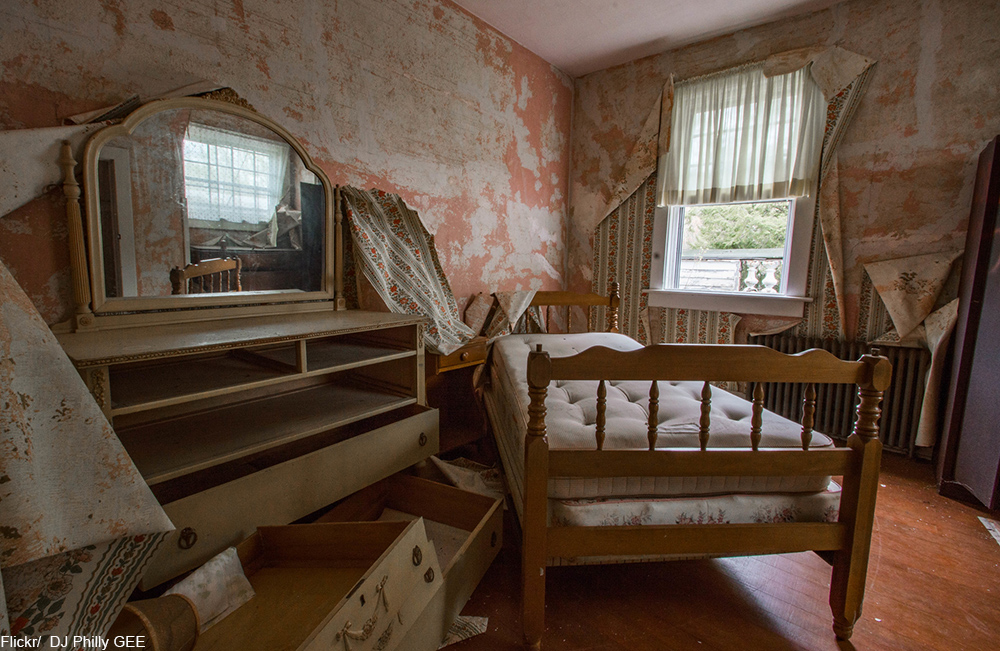 What do you think about urban exploration? Is it a good way to document buildings which may one day fall down entirely? Or is it trespassing plain and simple?

The most beautiful abandoned places in the world: Click “Next Page” below!