See Inside the Abandoned Chateau of a 19th Century Wine Merchant

An abandoned building can function like time a capsule, letting the era in which it was left behind really show through. But, what happens when said building has an incredibly long history? Well, in that case you might end up with more of a time capsule to an era long ago. Case in point is this French chateau which has been lingering in darkness for about 5 years or so. 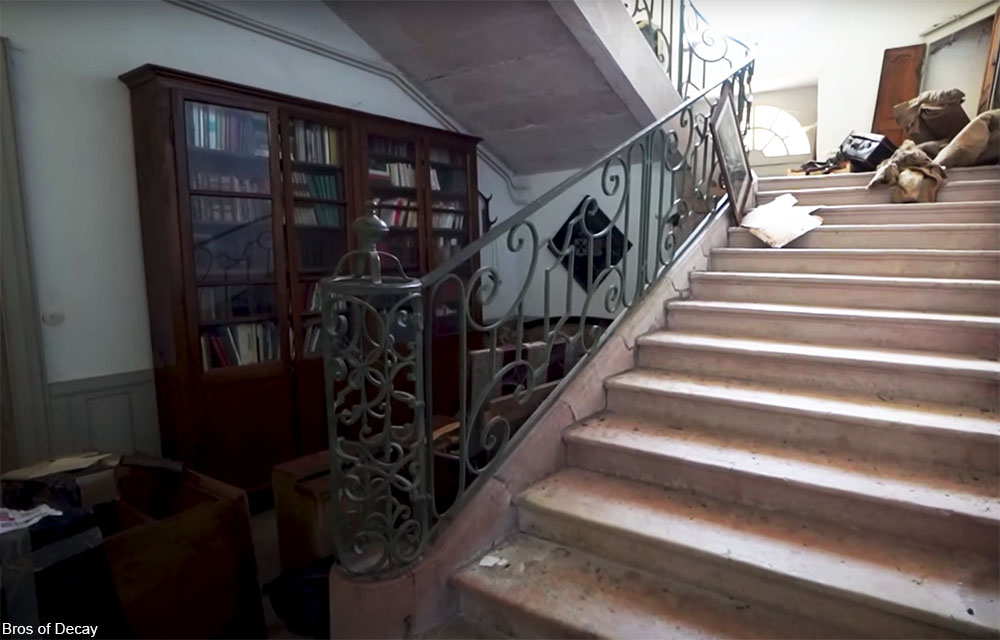 What’s really interesting is that many of the decor elements blend together late 18th century style (the Louis XVI chairs) with Victorian (like the carved wooden beds) and even Art Deco aspects (like scatter rugs and wallpapers). The combined effect is like falling through time, grabbing a little bit of each era along the way. While there are signs of life in the more recent past (a boombox and a toy tractor are two notable examples) many of the rooms have the distinct appearance of age.

Unlike many abandoned houses, this one is not covered in filth or graffiti and it looks like the people who lived there took care of the property the best they could. While there aren’t broken windows and collapsing structures, there is a lot of stuff in the home- perhaps owing to generations of people having lived there and not throwing too much away. 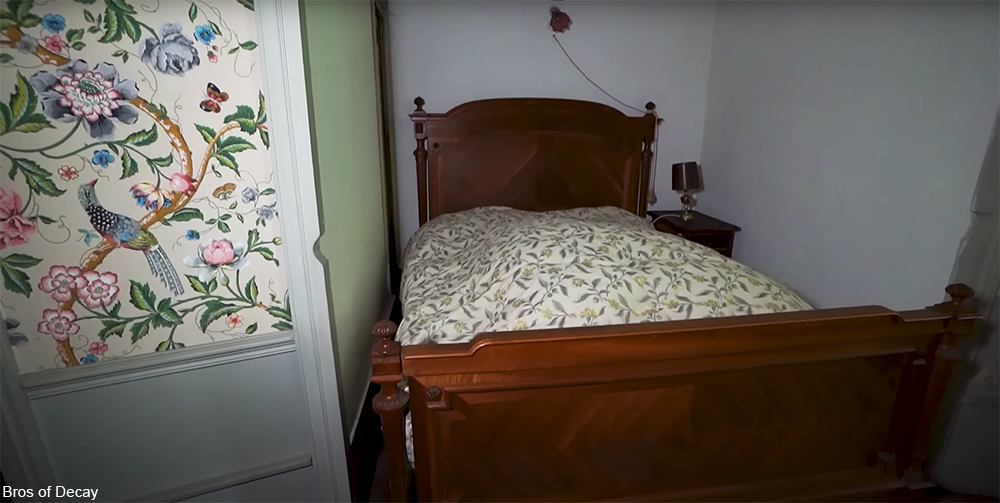 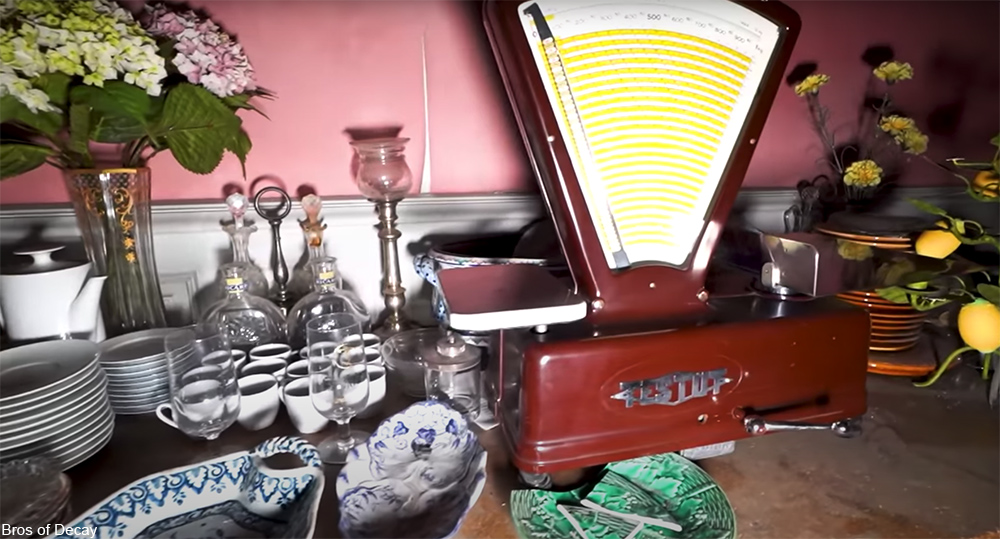 Urban explorers, the Bros of Decay, who filmed the interior of the chateau, did some research and discovered that the property once belonged to the Gerardi family. The family was from Austria originally and moved to France in 1820. While the family started out with little, they soon found themselves exporting precious French wine to other parts of Europe for a premium fee.

Their fortunes changed and they were able to build an amazing chateau with the profits. For generations the family lived there, keeping the look of many of the rooms much the same as they had been throughout history. It is not known what happened to the family, as they are reported to have just up and left one day, their possessions still in place.

Like many other buildings of its age and size in Europe, this chateau has “secret” portals called jib doors. These doors have minimal hardware and are meant to blend in with their surroundings- if not completely disappear entirely. These doors were often used by servants, but the family would have used them as well. Can you spot the secret door in the photo below? 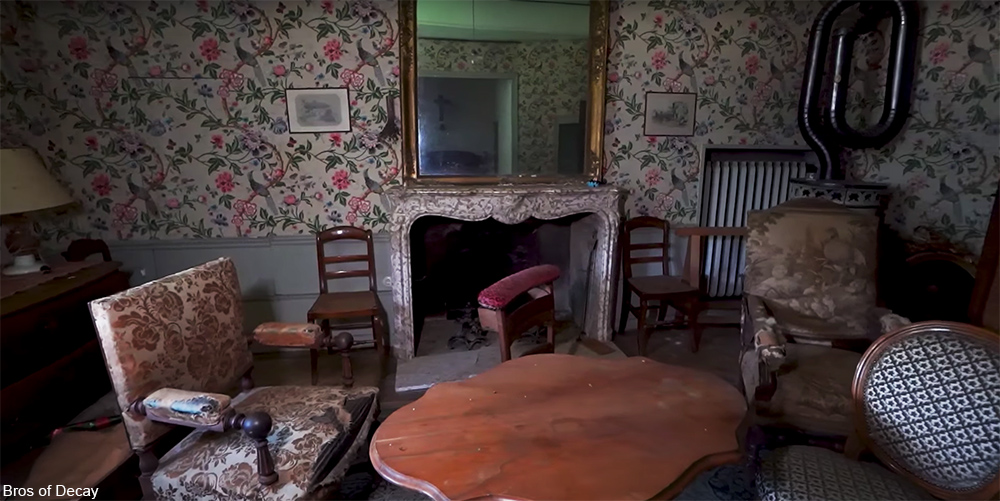 One aspect of the chateau that is shared with a lot of historic country houses across Europe is the numerous pieces of taxidermy all across the home. Deer, geese, and other animals are around every corner.

There is a very quirky trait that many of the rooms share. Despite the many marble fireplaces lined in decorative iron panels, many of the rooms feature upright stoves with curlicue exhaust pipes that are unlike any normal stoves. It’s very unusual. Perhaps it was cheaper to add the stoves than to repair decrepit chimneys. Or, maybe the occupants wanted to be extra warm in the winter. 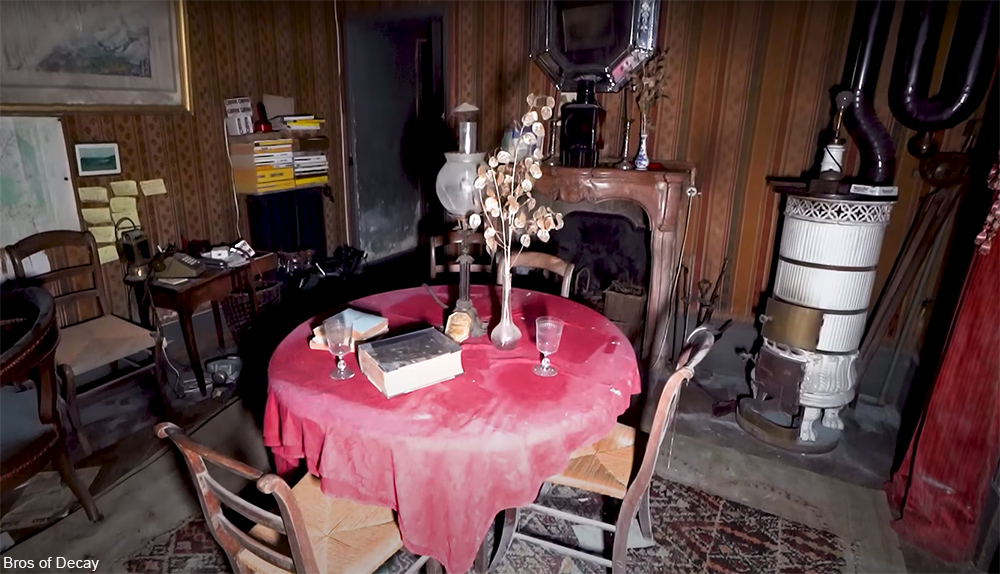 Other features of the chateau are a central staircase made of stone, iron railings, Delft tiles in the bathroom, and a host of elaborate marble fireplaces throughout the home. It does feel like no expense was spared in building this fabulous house. 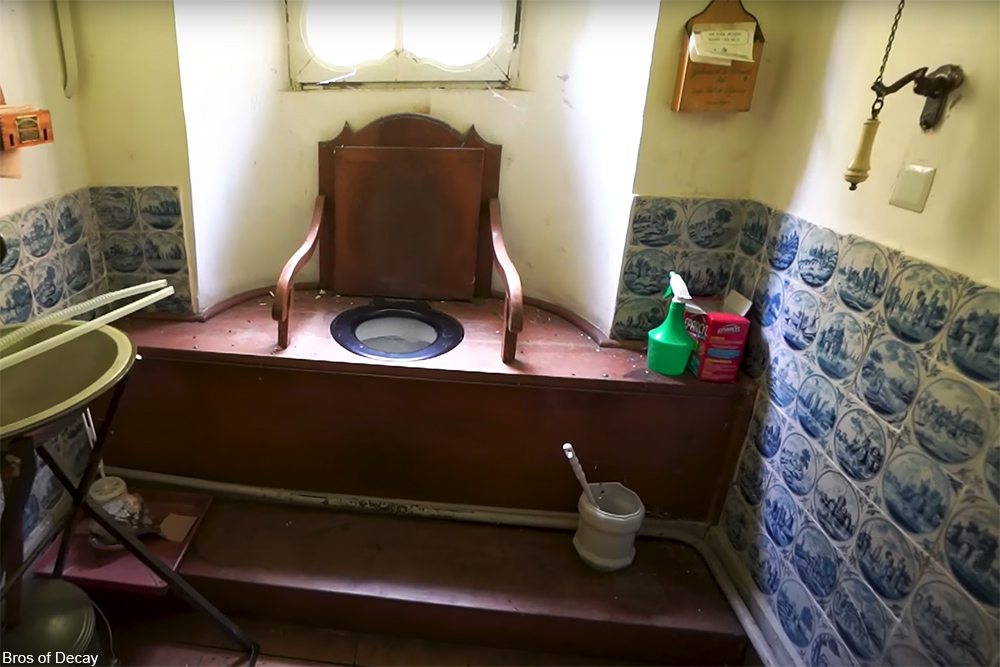 See more of this incredible abandoned chateau in the video below, including details like the gorgeous oil paintings and some of the many rooms in the home.