How Victorian Homes Got Their Spooky Reputation in Movies

If you grew up in an old house then you may have fond memories of living there. Gingerbread details on the front porch, large bay windows, fireplaces and hardwood floors: what’s not to love? But, for some people just the thought of living in a creaky old home gives them visions of haunted houses and witches cackling. So why is that? Well, as it turns out we’ve been conditioned to think of Victorian houses as spooky. Think about the scary books, movies, and TV shows you know. Probably a good portion of them take place at least in part at a Victorian home- the kind with a gable roof, a big attic, and lots of secrets. 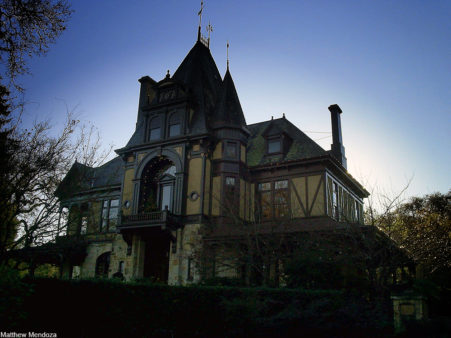 From Scooby-Doo to The Addams Family to The Munsters, and even in Arsenic and Old Lace, the Victorian houses are almost like additional characters. They’re often crucial to the story line and offer a wealth of hiding spots to stash unsightly family members, dead bodies, or even a hidden a trove of weapons.

There was a time, however, when a Victorian house was just…a house. It wasn’t one event that that led these gorgeous old homes become known as spooky rather than elegant. It took years of changing ideas and economics to do that. 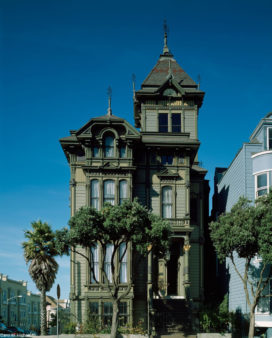 Most of the mansions and larger homes built during the late Victorian era in the U.S. (during the Gilded Age) were based on the stately homes of Europe. Most common was an influence from Gothic architecture, which favored strong lines, steeples, and other imposing design elements.

French architecture also played a role, as in the influence of the Second Empire style (also called Imperial style) which featured yet more turrets, towers, and the infamous Mansard roof. These grand homes were designed with tons of space, each home containing extra rooms like conservatories, music rooms, libraries, morning rooms, billiard rooms, and so on.

Houses like these were much less in fashion following World War I, when movements like Bauhaus, Prairie, and Streamline styles dominated American architecture in a what was a pull away from emulating the old money of Europe. 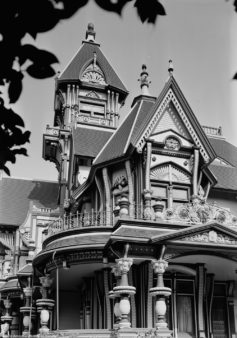 By comparison the Gothic-inspired mansions of the late 1800s were increasingly seen as decadent, old fashioned, excessive, and cumbersome. As their aging occupants died, the homes came to be associated with death. But, it was the Great Depression that really sealed the fate of these old homes when so many of them were left abandoned.

Many empty Victorian houses became the unwanted and creepy buildings down the block that etched themselves into the minds of youngsters. Local rumors sometimes kept kids form going inside, but at the cost of becoming cultural icons of decay and of the macabre.

How did the image of the Gothic Victorian mansion come to be in just about every horror movie and spooky book or TV show from the 1950s onward? Watch the video below too find out.