Partially Excavated Argentinian Dinosaur May Be Largest Land Animal Ever

We all know that dinosaurs were big, but we are finding out just how big they really got. Possibly the largest dinosaur (or land animal) to have ever been found is still in the process of being uncovered. In Argentina the fossilized remains of a massive sauropod have been found and excavations are ongoing on the giant creature, with researchers labeling the animal as a Titanosaurus, due to its very large size. 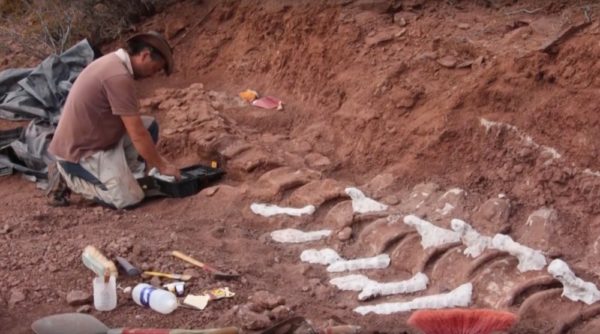 The fossilized remains of the animals were discovered in 2012 in the Neuquén Valley of Southeastern Argentina and archaeologists from multiple institutions have been working together to not only unearth the fossils of the Titanosaurus, but to also study the bones in detail. Excavation began in 2015 and only recently have any results from the dig become public.

Researchers working on the project say they still have more much to uncover. According to paleontologist, Jose Luis Carballido, there is a rough timeline in place for the excavation of new bones, “We have more than half the tail, a lot of hip bones…It’s obviously still inside the rock, so we have a few more years of digging ahead of us.”

Not only is it a massive amount of bone of unearth, the fossils are also embedded in the rock, making it hard to uncover. Alberto Garrido, director of the Museum of Natural Sciences of Zapala, said that “We suspect that the specimen may be complete or almost complete.” 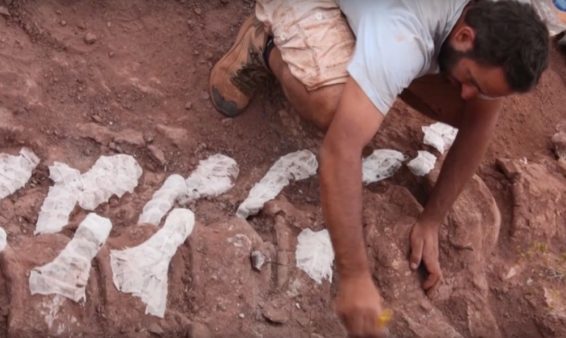 The animal in question belongs to the natural group, sauropods, which are long-necked herbivores that lived millions of years ago. Some well-known sauropods include Brontosaurus (also known as Apatosaurus
) and Brachiosaurus.

The Argentinian specimen is 98-million-years-old and is now believed to be the biggest land animal ever to have lived. The largest dinosaur previously discovered belonged to the species, Patagotitan mayorum, and is estimated to have weighed 60-80 tons when it was alive. So far the bones of the Argentinian specimen that have been uncovered are estimated to be 10-20% bigger than the bones of Patagotitan mayorum. 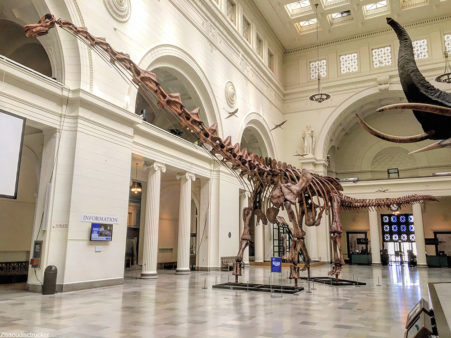 The largest animal on Earth, the Antarctic blue whale, has an estimated weight of 200 tons and an overall length of 80-100 feet.

A Titanosaurus 20% bigger than an 80-ton dinosaur would still only be half as big as the blue whale. Still, it may be the largest dinosaur or land animal to have ever been discovered. Only when the fossils have been fully excavated can the size of the creature more accurately be estimated. 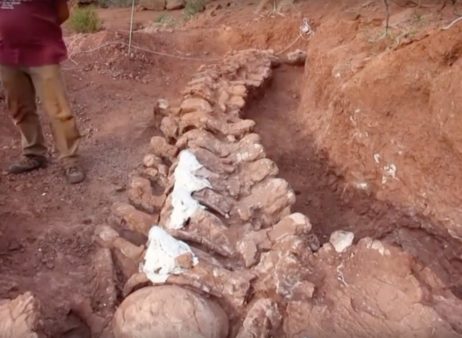 An upcoming paper on the specimen for the journal, Cretaceous Research, outlines how the animal has not yet been classified as a new species. Despite this, the authors point out that the features of the massive sauropod so far also don’t line up with other known species in the clade.

See the archaeologists at work on the Argentinian specimen in the video below.