Have You Heard Of The ‘Wheel Of Giants?’ Get To Know This 5,000-Year-Old Mystery.

This 5,000-year-old stone circle may look like a pile of rocks from the ground; however when you look at it from above, you’ll see that the 42,000 volcanic rocks actually form something quite intriguing. Known as the “Wheel of Giants,” five stone walls arranged in a circular pattern create an ancient monument that attracts scientists and archaeologists from all around to Golan Heights to see it. 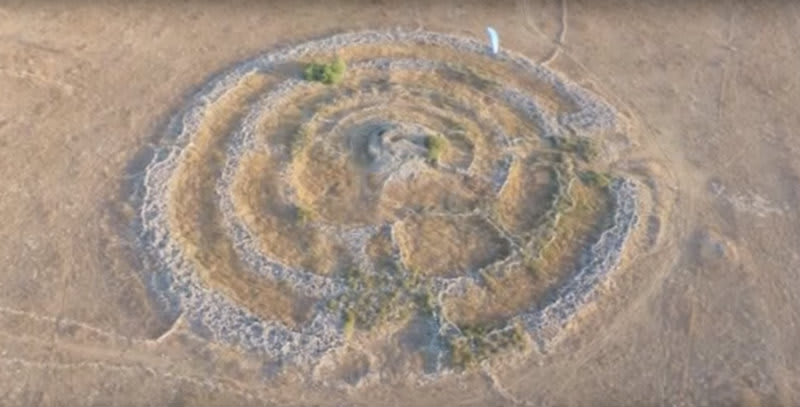 At the center of the circular walls is what’s thought to be a 15-foot-high burial mound. Most of the surrounding walls are about 6.6 feet tall, with the outer walls reaching up to 8 feet high. Similar to Stonehenge and other ancient monuments, the Wheel of Giants (or Rujm el-Hiri, which means “stone heap of the wild cat,” in Arabic), has been the source of much speculation.

Some experts believe the site was built by nomads, while others believe that the circles were built and used for other reasons, with the burial tomb being added later. Theories about what the circle was used for are abundant as well. Many believe that the site was primarily a burial ground, while some suggest that it was used to keep track of the date. Whatever it may be, there’s no denying the mysterious nature to this monument.

You can read more about the Wheel of Giants in this detailed-article from Popular Archaeology, and get a closer look at it in the following clip.