We all know that dogs have been around as pets for centuries. There is a reason they’re called man’s best friend, it’s because they’ve been by our side for millennia. Our dogs have always been our most loyal friends and most ardent protectors. And there is one sign from Pompeii in Italy, which shows that some things about dog ownership have not really changed.

Most of us who have dogs might have put up a sign or two around our homes that says “beware of dog.” It’s a friendly reminder to others that we’ve got a big, bad dog in our yard so enter at your own risk. And amazingly, it seems that the ancient Romans did the same thing with their pooches!

In what is perhaps the oldest known “beware of dog” sign, this Pompeii mosaic shows the image of a rather fearsome-looking dog along with the warning, “Cave Canem.” This is believed to come from the words “caveat” (beware) and “canine” (dog). The tiled image is at a Roman house in Pompeii known as the House of the Tragic Poet. It dates back to roughly the 2nd century BC. The house itself is well-known for the beautiful mosaic floors and frescos which are quite elaborate depicting of mythological scenes. 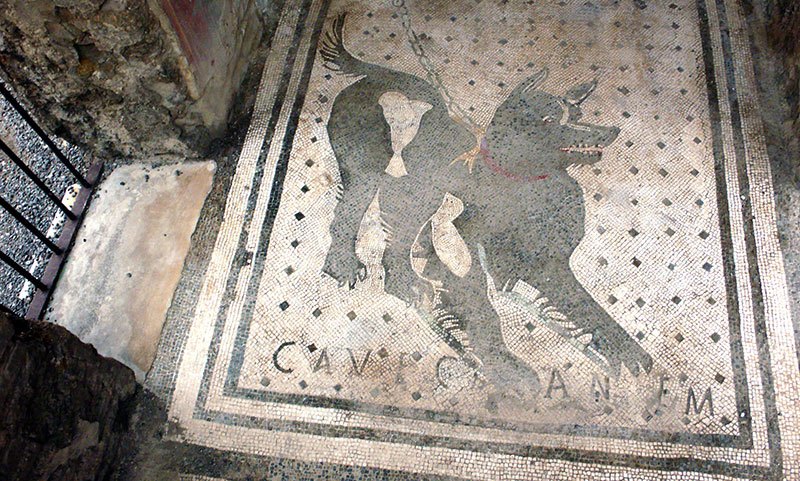 The house was first discovered by archaeologist Antonio Bonucci back in November of 1824. Since its discovery, the House of the Tragic Poet has remained a fascination for both scholars and writers alike throughout the years. The actual size of the home isn’t anything extraordinary. But what makes it such a remarkable find is the interior decorations which aren’t just plentiful, but also are some of the best-preserved frescoes and mosaics to come out of ancient Pompeii.

The size of the home and its interior artworks have got many people speculating on who the homeowners were and what their lives were like. Of course, there is no way that much can be done beyond speculating since there is very little information about the family – who were more than likely killed when Mount Vesuvius erupted in 79 AD. But the one thing we can say for certain about them is that they had a dog, and that dog needed his very own “beware of dog” sign.