There are some paintings and films that just define certain eras. Marilyn Monroe with her skirts being fluttered by the train vent, Jackie Kennedy’s box coat and pillbox silhouette, or the fins on a 1959 Cadillac to name just a few. There are some works of art that do this without even registering on our radar in a conscious way. The Bates’ Mansion from the 1960 horror classic Psycho is one such iconic image, but the work behind it is obscured- tucked away in the folds of history. 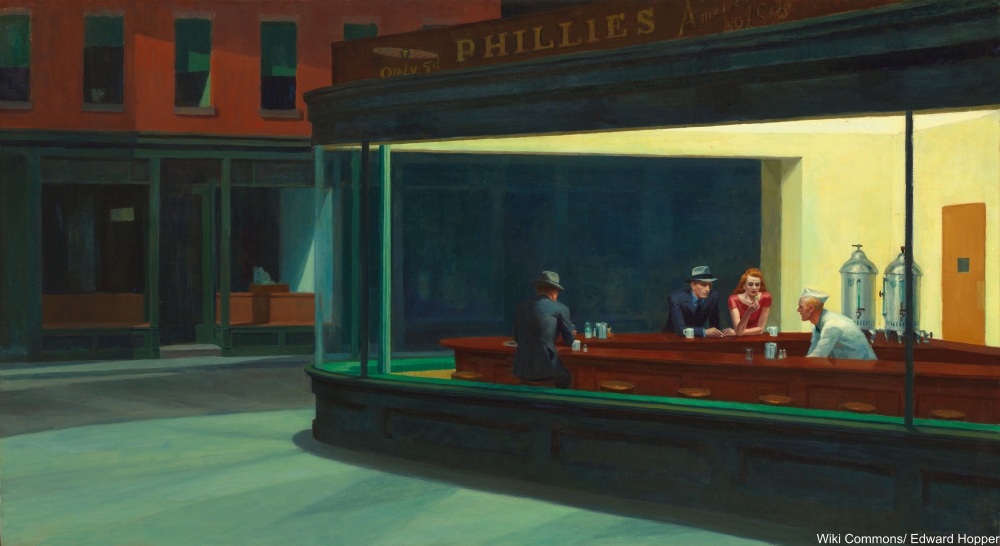 For many art lovers this painting, Nighthawks, is the ultimate depiction of mid-century style and character of New York City, capturing at once the vitality of the City That Never Sleeps, while conveying a sense of modernity which is still relevant 70-some years later. The artist is Edward Hopper (1882-1967), one of the most underrated artists of the 20th century.

How many of us have stared into copies of this iconic diner scene and felt we could almost visit this spot, see the chrome detail on the coffee pots and salt shakers if we just kept focused long enough? It’s a painting that seeps into the subconscious.

But, it was an earlier painting of Edward Hopper’s that made a big impression on Alfred Hitchcock. The House By the Railroad (seen below) was created in 1925 and showed a changing America, one where old houses were left out of context when railroads moved in or when “progress” altered the surroundings dramatically. Looking at this painting we are reminded of The Little House children’s book written and illustrated by Virginia Lee Burton in 1942 or of the house in the 2009 cartoon Up. 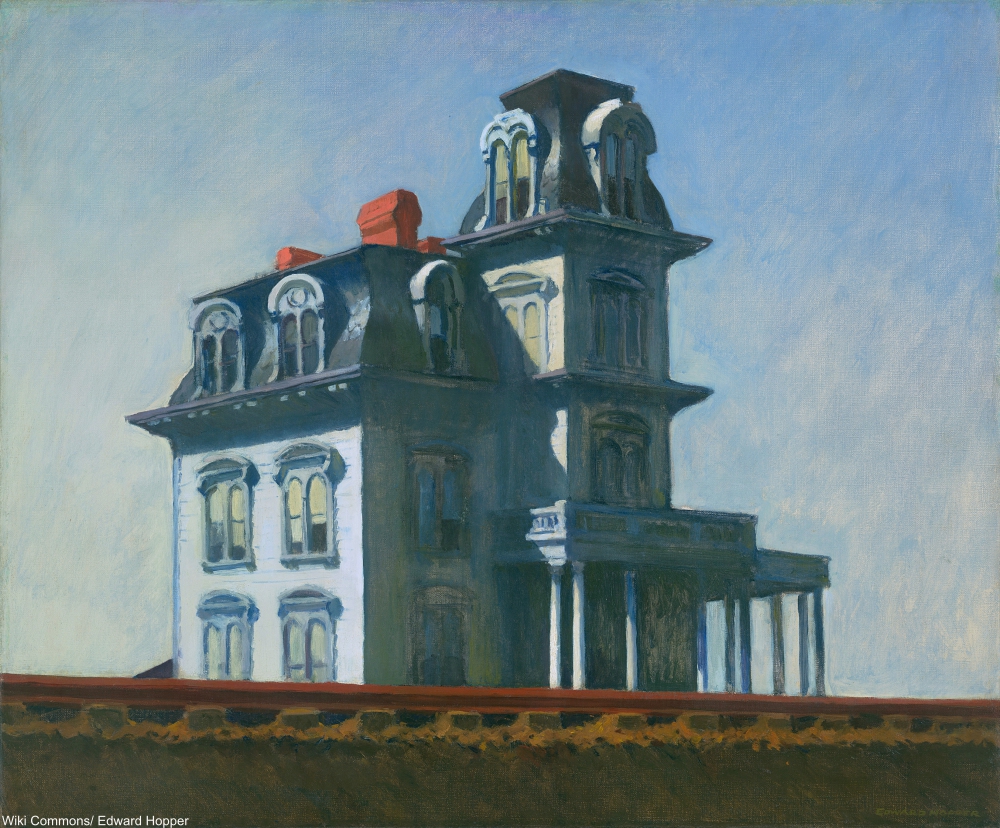 The House By the Railroad by Edward Hopper, 1925. Via/ Wiki Commons

Some have described Hopper’s scenes as lonely, but there’s another air to them. The empty homes and lots we played in as kids inspired all manner of stories and pretend scenarios, just as this isolated house could be abandoned and waiting to be explored. Or it could be someone’s pride and joy, a place they refused to leave just because of some railroad coming through.

In reality, Hopper was inspired by a real home in Haverstraw, New York. The house was built in 1885 and still stands today, surrounded on one side by a railroad as in 1925. A cemetery is nearby and the neighborhood is filled with Victorian homes from another era – unlike the forsaken scene that Hopper created with his paintbrush. The house is a rental now and we can’t help wanting to move in A.S.A.P. 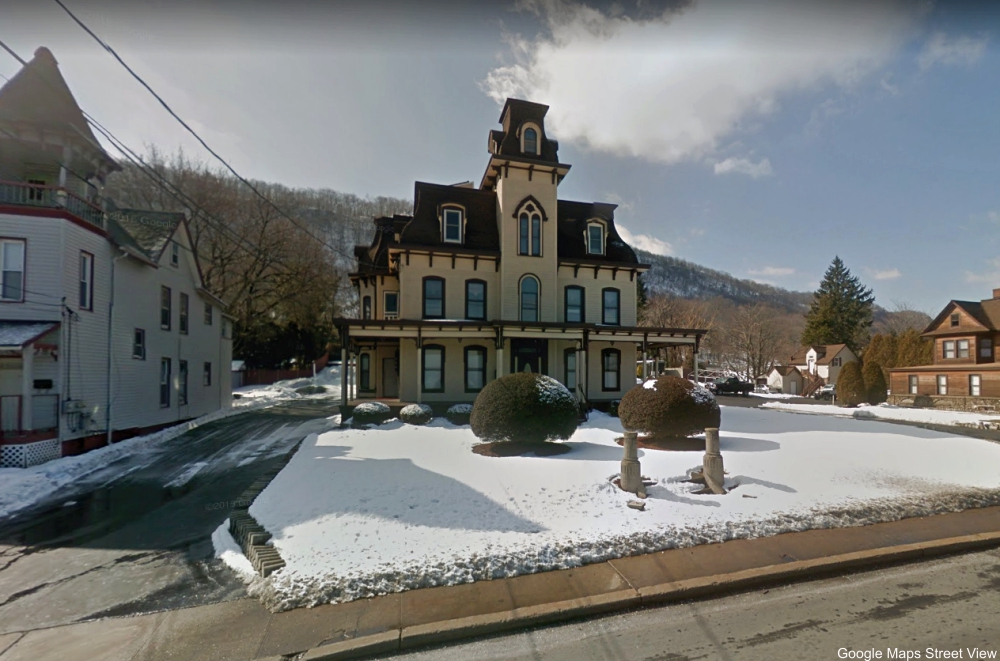 The Haverstraw home which inspired Hopper’s painting. Via/ Google Maps

The idea of progress as an isolating factor was still just as relevant in 1960 when Hitchcock’s Psycho conveyed the story of a man whose madness was allowed to flourish in a secluded environment, cut off from all but the occasional motor traveler.

Hitchcock used Hopper’s painting as the basis for the Bates’ Mansion, making the house dark in color but keeping many of the Victorian decorations and the imposing nature of the positioning of the house. The arrangement of the set can be seen much better in the original black and white Psycho trailer, a marvel of modern marketing which shows nary a scene from the film, but instead focuses on the set and the storyline as told by Alfred Hitchcock himself. What could be be a more convincing sales pitch for the film?

The set for the house in Psycho was actually assembled from parts of the Harvey House, a Universal Studios set that had been used in the Jimmy Stewart film Harvey in 1950, but the design was heavily influenced by the Hopper painting. 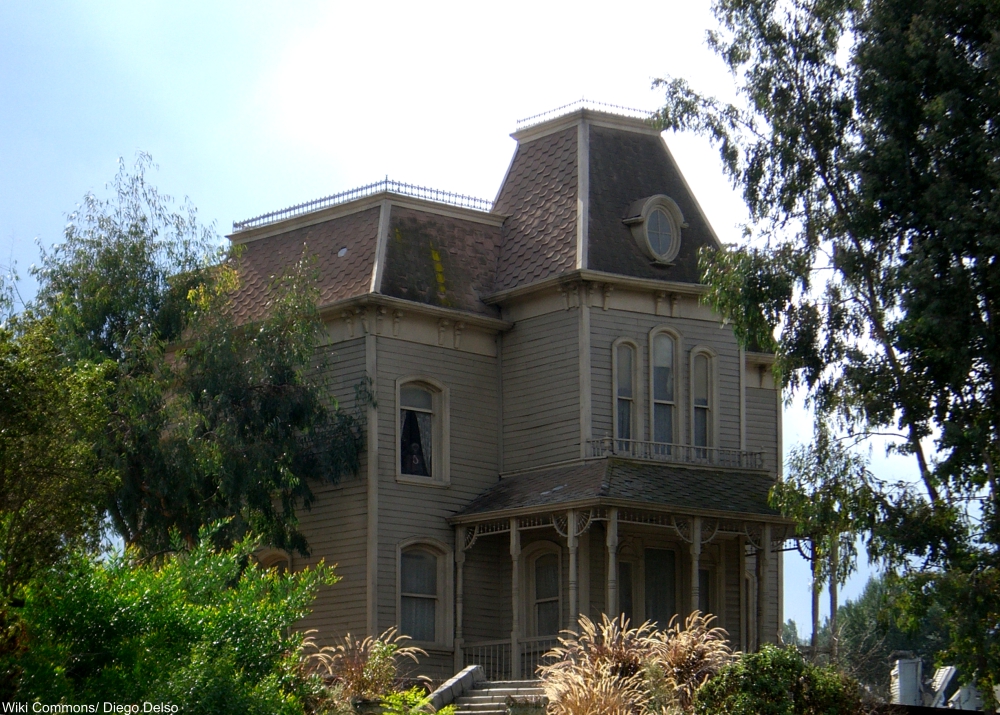 The Psycho house on the Universal Studios back lot. Via/ Wiki Commons

The House by the Railroad was acquired by the MoMA in 1930, where it still resides today. The Psycho house is still standing on the Universal Studios lot, a very popular attraction on tours. But, of course, you can see the Bates’ Mansion anytime you want just by turning on one of the greatest horror flicks of all time.

Click here for a look at 9 gorgeous Victorian mansions that were saved!