The Theory of Corners while On The Hunt

One of the interesting phenomena that we’ve seen recently while checking out antique shops is that really good things are often in corners, especially in back corners. Maybe many people don’t work their way down the aisles to the back or they don’t peer behind flashier objects to see what lies behind. Maybe the owner just really loves them and puts them where they are less easily observed. For whatever reason, we’re seeing more interesting antiques in corners. And, as we all know, researching things from corners can take us to new questions.

This is Nancy with Dusty Old Thing and yesterday I enjoyed a visit to Midway, Kentucky, in Woodford County’s horse and bourbon area. Besides some great restaurants on either side of the railroad that goes right through the center of town, there are some nice antique shops. I stopped by one, the Eagles Nest, owned by Josephine Gardone, and completely enjoyed my visit. Like many shops now, it also carries home accessories and some art work so the antique hunter needs either to know what is new/recent, or ask. At the very back of one aisle, behind a cute newer lamp, was what I recognized as a very nice early 19th century English fashion plate. The price was good, so with the Theory Of the Corners holding, I purchased it. It had been nicely matted and framed and is, below, shown in soft lamp light. 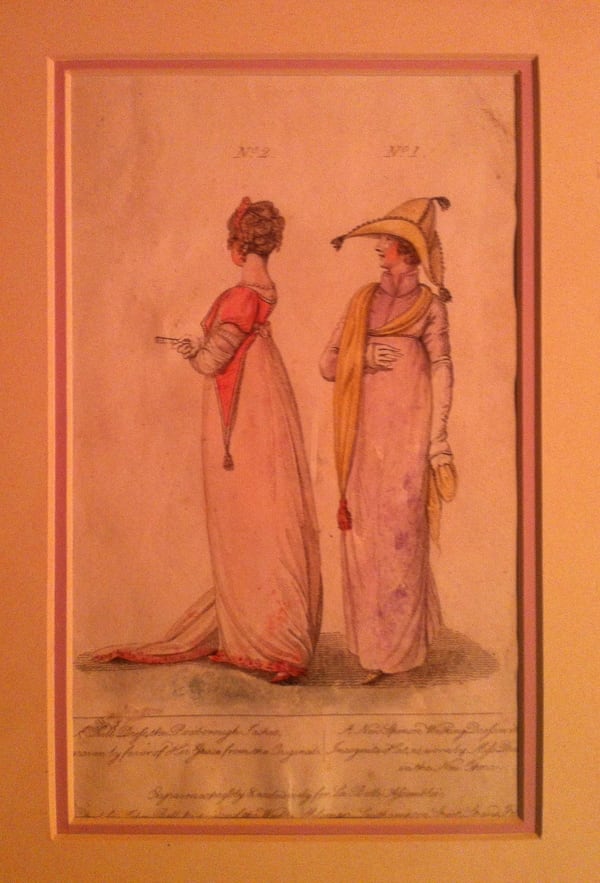 It’s always fun to research antiques. Fortunately enough of the script showed at the bottom to realize that it came from an issue of La Belle AssemblÈe , a woman’s magazine that set the style for Regency dress & style in England. Think Jane Austen. 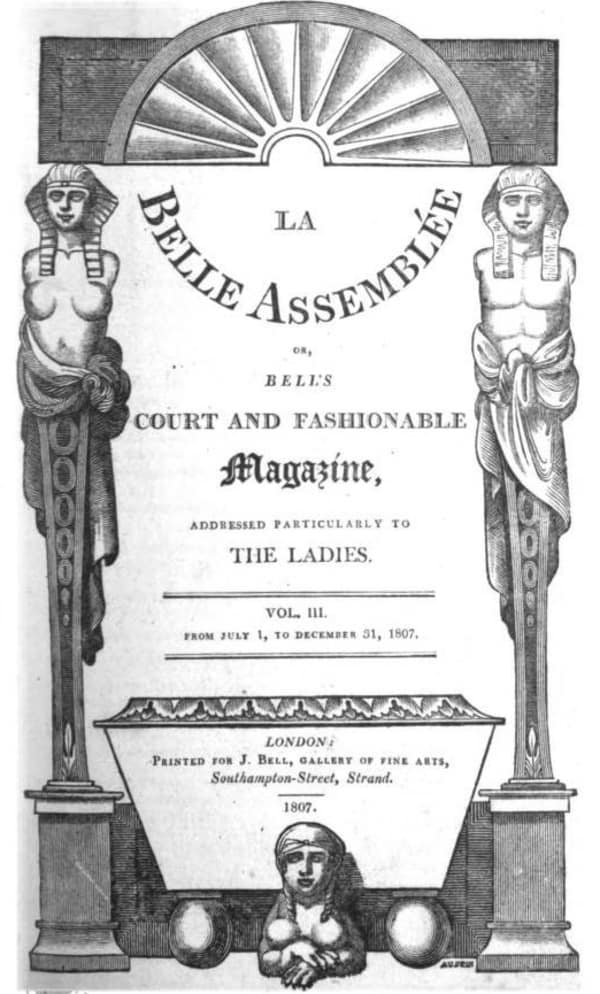 La Belle AssemblÈe, published in London by John Bell from 1806 to 1837, was more than just an early Vogue. It also contained, up to the very early 1820’s, articles on politics and science, reviews of the arts and theatre, poetry, and fiction from writers like Mary Shelley. The engraved plates, however, made it highly popular. Usually two plates showed a member of the Court and a fashionable lady of society in the latest fashion. Other plates might contain sheet music or a sewing pattern. In the early issues, two versions were sold. One was all in black and white; in the other the fashion plates were hand painted in watercolors. Purchasers, of course, could also hand paint the black and white fashion plates themselves.

The plate I purchased comes from one of the earliest issues of La Belle AssemblÈe. It dates to 1807. The date is on plate, but the last two digits had either been covered by the matting on the one I purchased or was lost when removed from the magazine. It was easy, however, to date it thanks to two great resources online: regencyhistory.net and the wonderful blog, Jane Austen’s World. In addition, Science in the Nineteenth Century, contains interesting information.

In 2010, Jane Austen’s World did a short article on La Belle AssemblÈe and included two versions (below) of the plate I had purchased. The first one is in black and white, the second with watercolor. 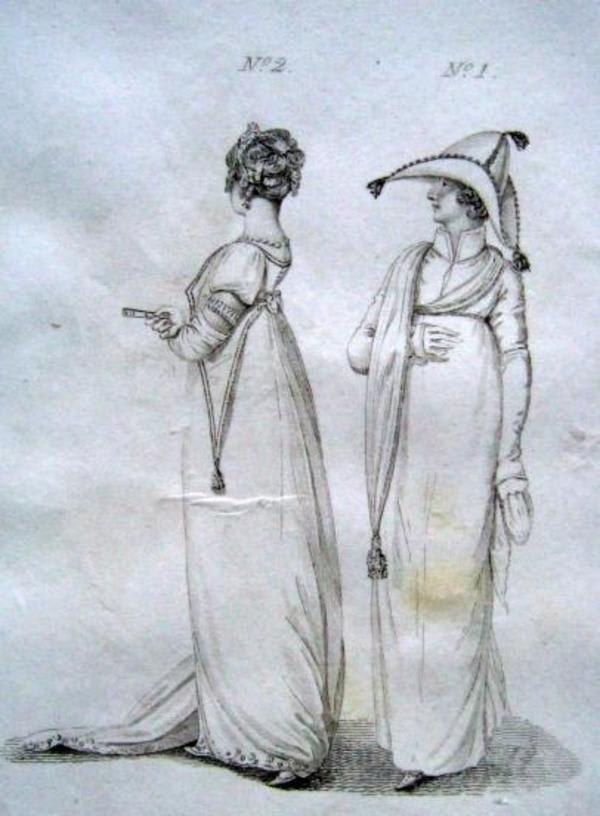 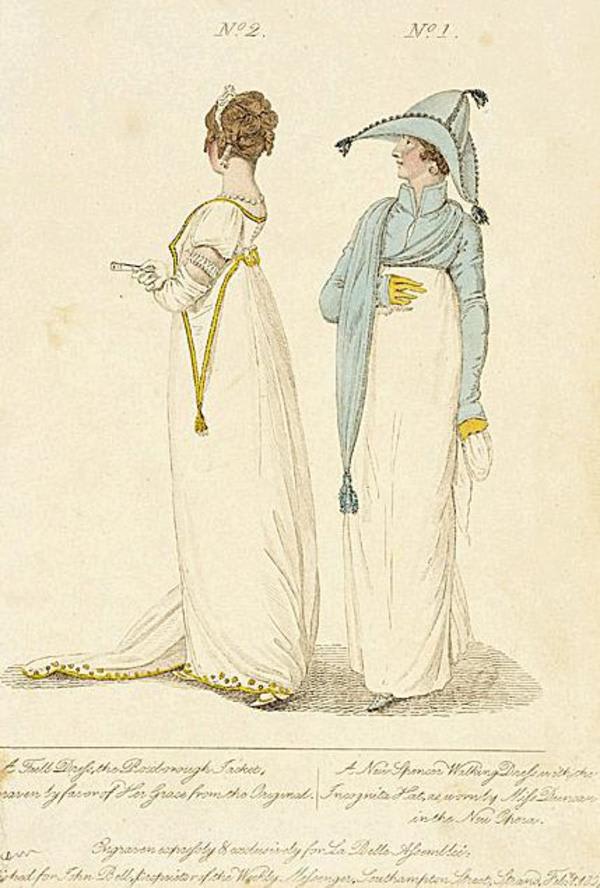 The plates describe on the left a dress and “Roxborough Jacket” worn by the Duchess of Roxborough. On the right is a “New Spencer Walking Dress with the Incognito Hat as worn by Miss Duncan in the New Opera“.

After a moments amazement that a hat of that style could be called “Incognito”, I wanted to know who was “Miss Duncan”. It appears that she starred in a comedic opera in 1807 called “False Alarms, or My Cousin.” The New Opera refers to what is now called “Her Majesty’s Theatre”, which had been rebuilt, mainly for opera, just a few years before.

One perplexing question remains, however, about La Belle AssemblÈe. In the mid 1810’s, the character of the magazine, and its competitors, changed to focus on fashion and domestic pursuits, significantly dropping articles on education, politics, news and science. Before there had been articles on botany, geology, mechanics. After about 1820 these were almost all gone. Sources say it was due to a changing perception of the role of women in British society. We’d like to ask: what caused that Enlightenment to end for women? Why did fashion then only mean dress and manners and domestic activities? Why did fashion no longer mean learning? Why was learning and intellectual inquiry pushed to the Corner?

Yes, the Theory of the Corners leads not just to “old things”, but to old questions. There’s always a “why?”