(When we asked why the art glass we now call Carnival was so popular in the early 20th century, two of the world’s leading experts, Glen & Stephen Thistlewood of England, came to our rescue. We hope you enjoy the article they wrote for Dusty Old Thing and the amazing photos they generously have allowed us to use.) 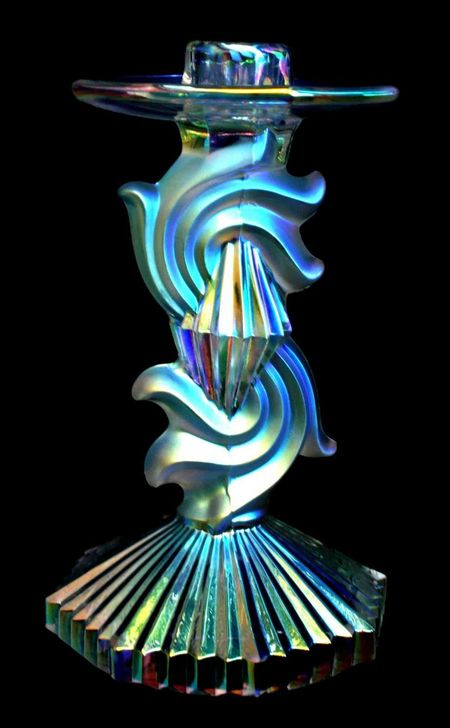 Sublime Deco – A stunning candlestick made by Libochovice in Czechoslovakia

The Social and Design Context of Carnival Glass

So, what exactly was the social and designcontext for Carnival Glass: what inspired it and why did it flourish? Two wordswill sum it all upóitís complicated!

What would it have been like back in theearly 1900s, at the advent of Carnival Glass? In the home, the tungsten lightbulb was just becoming available, though candles and oil lamps were still inuse. The vacuum cleaner had just been launched. Kelloggís Corn Flakes were thenew de-rigueur breakfast; Coca-Cola, Pepsi and Jell-O were the new food fadsand the pizza had just hit the New York food scene. There were still manyindications of a more difficult past, but things were changing. Advances intransportation made the movement of raw materials and goods so much easier,facilitating the growth of industry. Transportation by sea had, of course,brought millions of people into the United States from other parts of theworld. Immigrants had flocked in, carried by the steamships and the greatocean-going liners. It was arguably the biggest movement of population ever totake place. By 1900 an estimated thirty-five million had arrived from much ofthe civilized world, principally Europe, bringing skills and ideas. This was themelting pot of new concepts, advancement, growth, change and challenge fromwhich Carnival Glass emerged.

The genesis of Carnival Glass came at atime of changing fashion in art and design. Soówhat exactly inspired CarnivalGlass? Where do we look for the inspiration behind the desire to useiridescence? And where do we look for the background to the multitude ofpatterns seen on Carnival? To answer these questions we must cast our net wide,for Carnival Glass was like a mirror, reflecting all the changing fashions andtrends. Its style was truly eclecticóborrowing freely from various sourcesóaconflation of all the different popular tastes.

The first actual (and intentional) use of iridescenceon glass that we can be reasonably certain of, was in Bohemia in1856: the concept was developed and iridescent glass took off. In England,Thomas Webb and Sons made great use of iridescence on their glass, and Tiffanyalso capitalized on it, devoting much of his energy towards producing and distributingdecorative arts destined to transform the interiors of homes of wealthy buyerseverywhere. It was high fashionóand expensive. In fact, it would have taken theaverage worker almost two monthsí wages to buy a Tiffany vase. Into this arenacame a mass-produced version of fancy iridized glassówhat we know today asCarnival Glass. The availability of this inexpensive glassware that emulatedthe splendid Tiffany iridescence and also boasted rich and decorative patterns,was bound to please the buying public. The wholesale price of a dozen iridizedvases from manufacturers such as the Fenton Art Glass Company, was less than adollar! In this way, Carnival Glass took the market. In fact, in some circlesit began to be called ìpoor manís Tiffany.î

What of its design context? Carnival boastsa century long legacy that reflects its eclectic design. It drew inspirationfrom styles such as Arts & Crafts, Orientalism, Art Nouveau and Art Deco.The Carnival makers wanted to make glass that would SELL. So they looked topopular design ideas and motifs of the day that had themselves been influencedby those stylesóespecially those that were seen on household items such aswallpapers, tiles, textiles, fabrics and even chic magazine covers (ìVogueî andìLifeî for example), as well as iridized art glass like that made by Tiffany.And they copied them! They borrowed ideas from desirable goods that wereexpensive and made similar versions in cheap and affordable glass. Its design was aimed at ordinary peoplein ordinary homes. And whatís more … the people loved it!

The Carnival Glass makers made thefashionable stuff affordable. It was a simple formula: take a popular designeveryone wants, add a Tiffany-like iridescence and sell it as cheap as chipsólessthan a dollar a dozen. Make it practical, in hundreds of different shapes andmake it look colorful. Marigoldóthe lustrous golden-orange color that goes handin hand with Carnival Glassóheld a fascinating secret, an extraordinary twist.As we wrote in Martha Stewartís ìLivingî magazine (October 2004) marigold mayhave been a best-seller in the early twentieth century because indoor lightlevels were low and the furniture was dark. ìPut marigold on a mission oaktable, light one small lamp Ö and the glass just glows.î

All of these styles and trends; ArtNouveau, Arts and Crafts and more, were reflected in Carnival Glass patternsand they all helped to create and shape Carnival. A little bit of this and alittle bit of that! The patterns found on Carnival are very wide rangingóthereis no single style, but there are many design sources. Yet there is one commonthreadóit was what the people wanted! It looked good in their homes, on theirshelves and on their dining tables. This was ìdesignî for the people.

Glen & Stephen Thistlewood are CarnivalGlass researchers and authors. To read more about this subject, see their bookìCarnival Glass ñ The Magic and The Mysteryî (Schiffer Books). Visit theThistlewoods website www.thistlewoods.net for more information and to contact them. 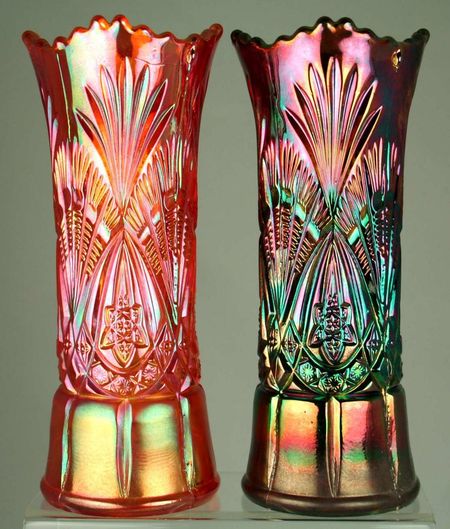 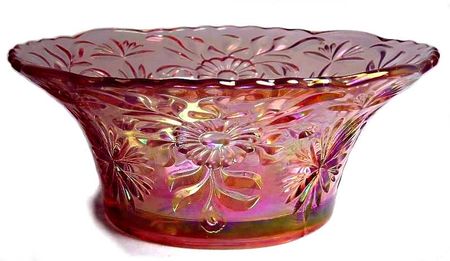 From Eda Glasbruk, a rare pink Carnival bowl in the Floral Sunburst pattern 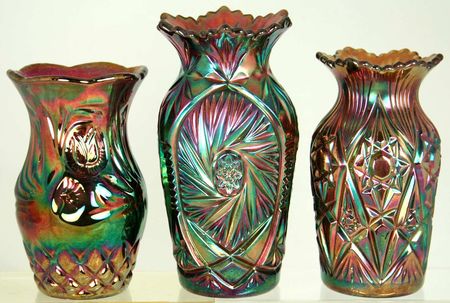 Three blue vases from Finland – Western Thistle and Spinning Starlet (both Riihimaki) and Starlight (by Karhula).

We at Dusty Old Thing would like to thank Glen and Stephen for helping our antiques community better understand iridized glass and why it was so very popular at a particular period of history. We think the photos they’ve shown and the ones we’ve featured earlier from the Tampa Bay Carnival Glass Club shed a new light for many of us on just what is so captivating about those lights that seem to shine from within.