It Wasn’t George III After the Revolution: January 6 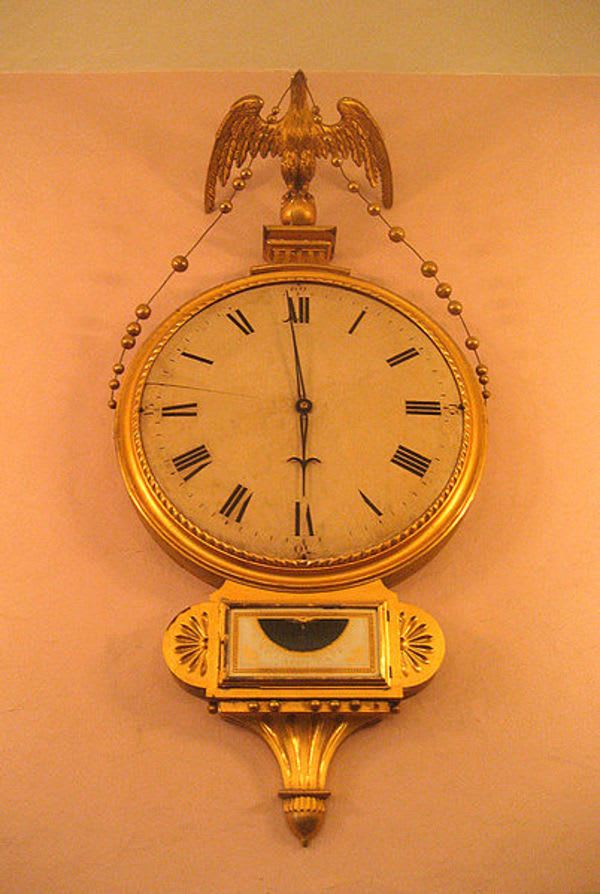 Simon Willard, who made the clock above, probably learned clock making and repair starting in his youth before the American Revolution. Before the war was over, he had his own clock shop in Boston. This clock, while probably made with English brass, is in what we call the Federal style. The simplicity and the eagle on top says “Federal. New County. Independent.” So, too, with the chair below, designed by the wonderful Benjamin Labrobe. 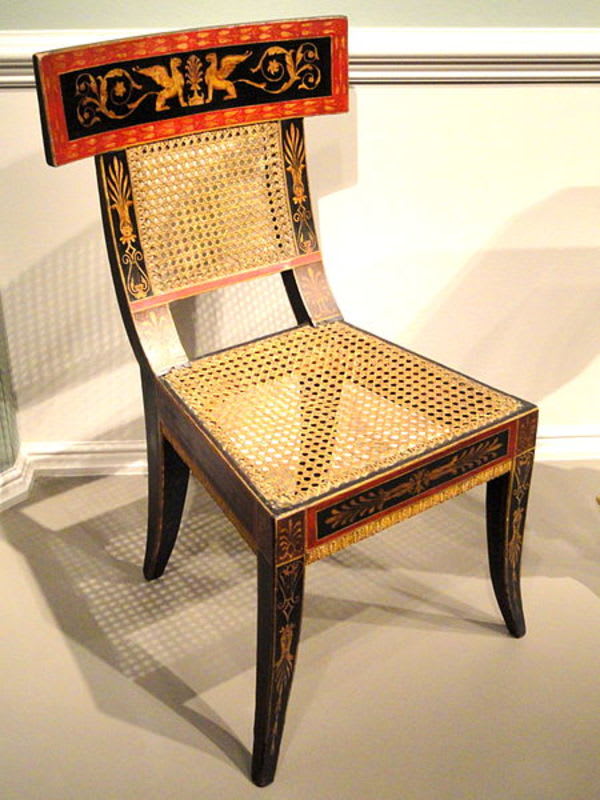 (Circa 1808 side chair designed by Benjamin Latrobe and decorated by George Bridport in Philadelphia, in the collection of the National Gallery of Art. Photo licensed under Creative Commons)

Although Latrobe’s chair looks “fancy”, the basic form is not. It’s made of maple and poplar with a cane seat. The lines come from the classical forms of Greece in keeping with a spirit of democracy and enlightenment that the Revolution and the Federal period proposed. The decoration, also in classical forms, is just paint plus a bit of gold leaf. There is no fancy carving. Latrobe, one of England’s most brilliant architects during the reign of George III, came to the U.S. to literally help build the new nation, showing in architecture the spirit he felt the new Federal movement embodied. His work at the Capital, at the Baltimore Cathedral, and in various other public buildings and private residences full of light, showed that.

The chair below, however, is a bit more elaborately carved. It was George Washington’s chair used in his first Inauguration in 1789. 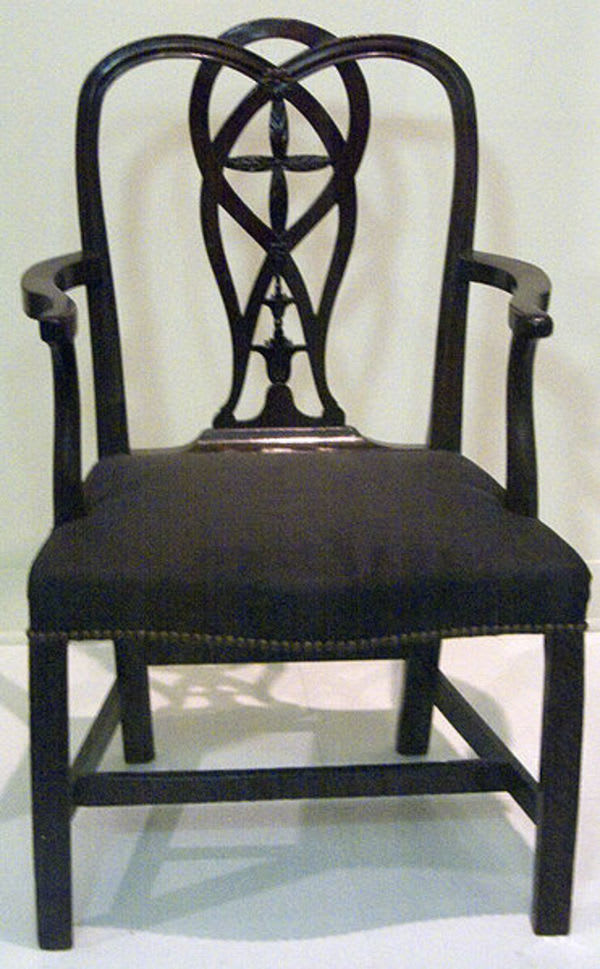 (Circa 1785-89, Mahogany, pine and poplar. In the collection of the New York Historical Society. Photo taken by cjn212 for Flicker and licensed under Creative Commons).

So why are we talking about Federal furniture and George III and the Revolution?

It’s because the “periods” of antiques, the styles of furniture and decorative arts and dress and manners, may be similar in certain countries but go by different names. It can get confusing.

We just recently visited an antique shop in an area of the U.S. where probably a majority of citizens claim ancestors who fought in the American Revolution. But yet most of the high-priced antiques in the shop were labeled “George III” or “George III style”. What? After checking the joinery it was clear, however, that they were mostly 1940’s Federal Revival Revival. Not the Centennial Revival of the 1870’s, but well-made mahogany pieces from around 1940-50. The dealer wasn’t being actually deceptive since there was no date given and no claim of authenticity, but why couldn’t the labels at least have said “Federal style”? Why “George III”? We did win the Revolution over 230 years ago.

But, to be honest, if the forces under Washington had lost the Revolution, we would be calling the pieces like the ones pictured above, “Georgian”. Willard may or may not have made a clock but it would not have had an eagle. Washington would have certainly been hanged and Latrobe would have stayed in England designing country estates. However, Washington and the French Navy won. Most American furniture, then, between about 1775 through 1830 is called “Federal”.

At the same time, of course, Louis XVI was having a hard time in France. The elaborate furniture created in his reign is still called “Louis XVI”. In England, “Georgian” stayed the rage until 1810 when the young George IV had to take over from his unstable father, ruling as a Prince Regent. That glorious time of English manners and style gave us Jane Austen and “Regency” style. And, in Sweden the marvelous furniture we now call Gustavian lasted to about 1810.

It was a great time of furniture and decorative arts, but they all did reflect the philosophies and the power shifts of the decades. George III, Louis XVI, Gustav, and George Washington. Power and Revolution. And, in the US, it’s not George III after the Revolution.