When a cliff collapsed, the ancient footprints were unveiled and they may offer some insight into the creatures that were on the earth before humans.

Geology is rather interesting, and at times, something may be uncovered that really makes us wonder. This recently happened in the Grand Canyon when some undiscovered treasures were unearthed.

As it turns out, the historic site is thought to hold some of the oldest known vertebrate tracks in existence. When a cliff collapsed, the ancient footprints were unveiled. It may offer some insight into the creatures that were on the earth before humans. Scientists are obviously excited about the discovery.

Alan Krill is a Norwegian geologist who spotted the tracks first back in 2016. He was with students on a hiking expedition when he took a picture. After sending the image to a colleague, it seems as if it was a significant find.

PLOS One published the paper on August 19. It confirms that small animals left the tracks, perhaps small reptiles. They left the tracks while crossing an ancient sand dune and it is the oldest that has been found in the National Park.

Stephen Rowland, the man who received the pictures from Krill, had the following to say according to the National Park Service:

“These are by far the oldest vertebrate tracks in Grand Canyon, which is known for its abundant fossil tracks.

They are among the oldest tracks on Earth of shelled-egg-laying animals, such as reptiles, and the earliest evidence of vertebrate animals walking in sand dunes.”

It seems as if the 2 animals that left the tracks across the dune did so within a few hours or days of each other. What is it that we know about these creatures?

One thing that we can tell from the report is that they use their front and rear legs together on one side and the other side, something that is known as walking in “lateral sequence.”

Many animals still walk this way on earth.

“Living species of tetrapods, dogs and cats, for example, routinely use a lateral-sequence gait when they walk slowly.

The Bright Angel Trail tracks document the use of this gait very early in the history of vertebrate animals. We previously had no information about that.” 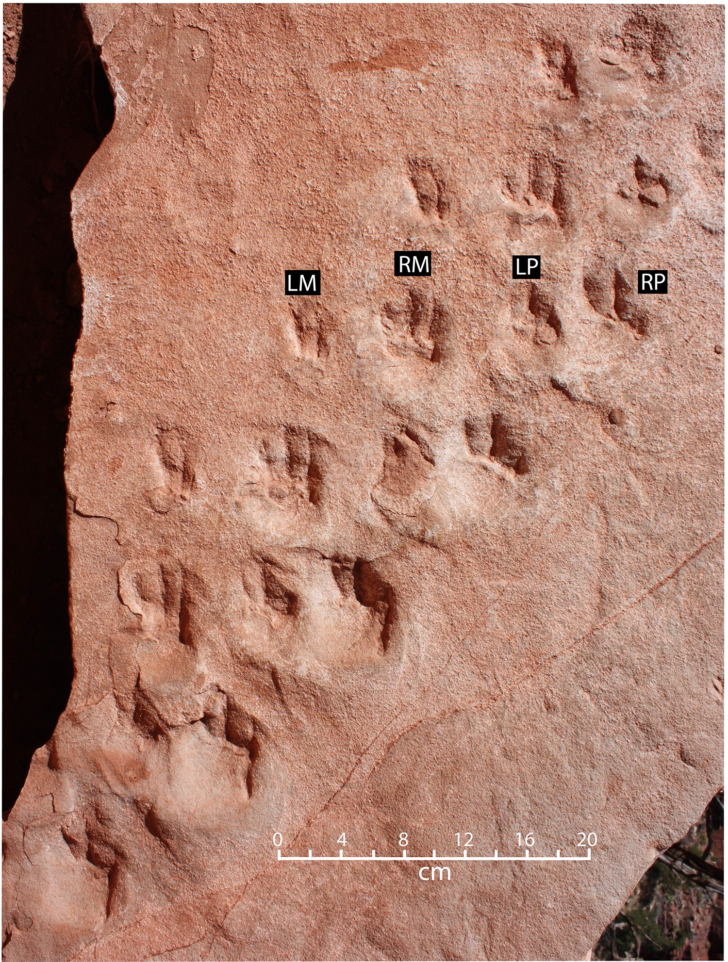 Incidentally, a tetrapod is a creature that has 4 limbs. Of course, that doesn’t really narrow things down because it could’ve been a lizard, dinosaur, bird, or amphibian.

More than likely, they were “either basal reptiles or basal synapsids,” the journal article states. In the end, however, we really can’t be sure.

One thing that we do know is that the tracks weren’t left by birds. Additional research will need to be done and published before we can learn more about these interesting tracks.