Designed with plenty of customizations, the large Lincoln-Mercury Continental convertible in use during President John F. Kennedy’s term, was quite grand. But the then state-of-the-art vehicle lacked some surprising luxuries and security features that became standard for presidents and dignitaries in the years that followed. The unmistakeable car that President Kennedy was riding in Dealey Plaza has a fascinating (and surprisingly long) history. 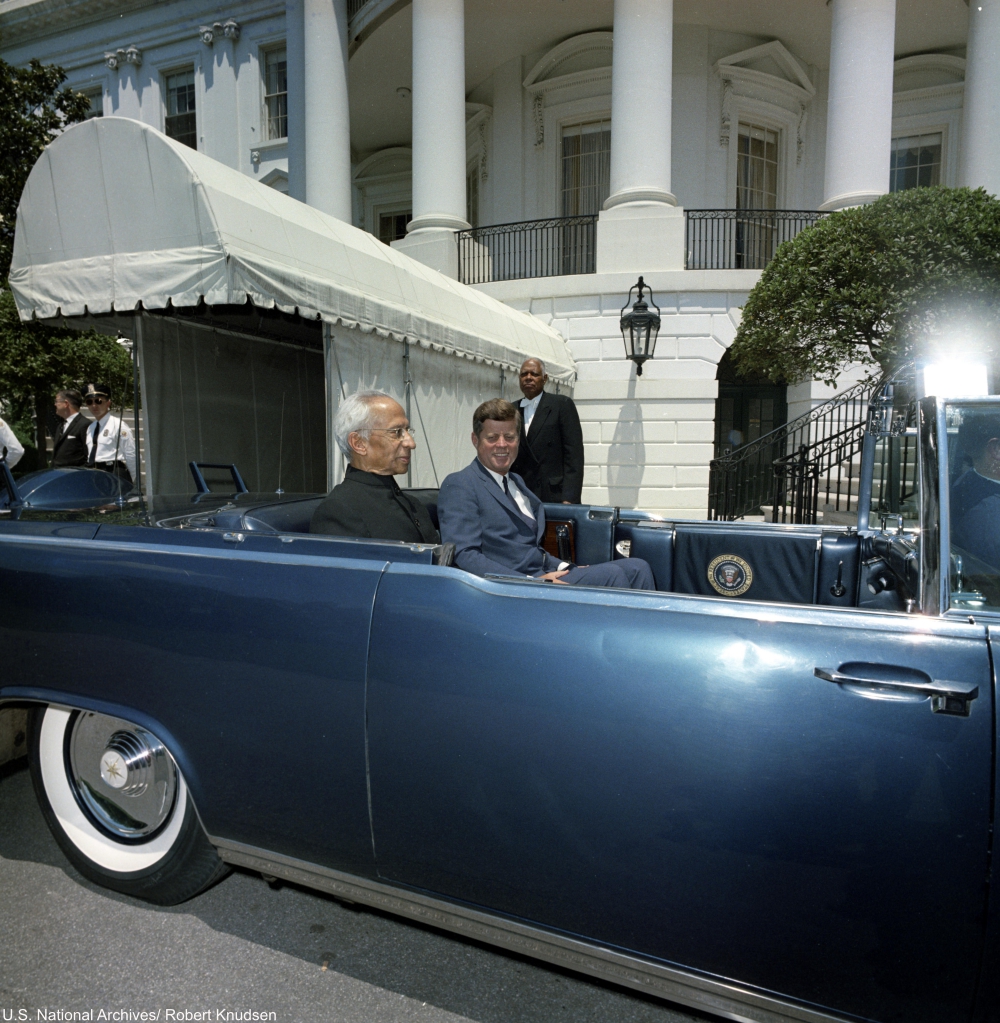 President Dr. Sarvepalli Radhakrishnan of India and President Kennedy in the Lincoln outside the White House in 1963. Via/ Flickr

The 1961 Lincoln (code named “SS-100-X” by the Secret Service) was a regular factory make that was modified after the fact to include security features that, at the time, were thought to be stringent enough to be used by the leader of the free world.

Retractable mounts were added all around the base so that Secret Service agents could ride on the outside of the car standing style. A clear plastic roof was added as an optional top, as well as a metal one, though neither were bulletproof in the slightest. 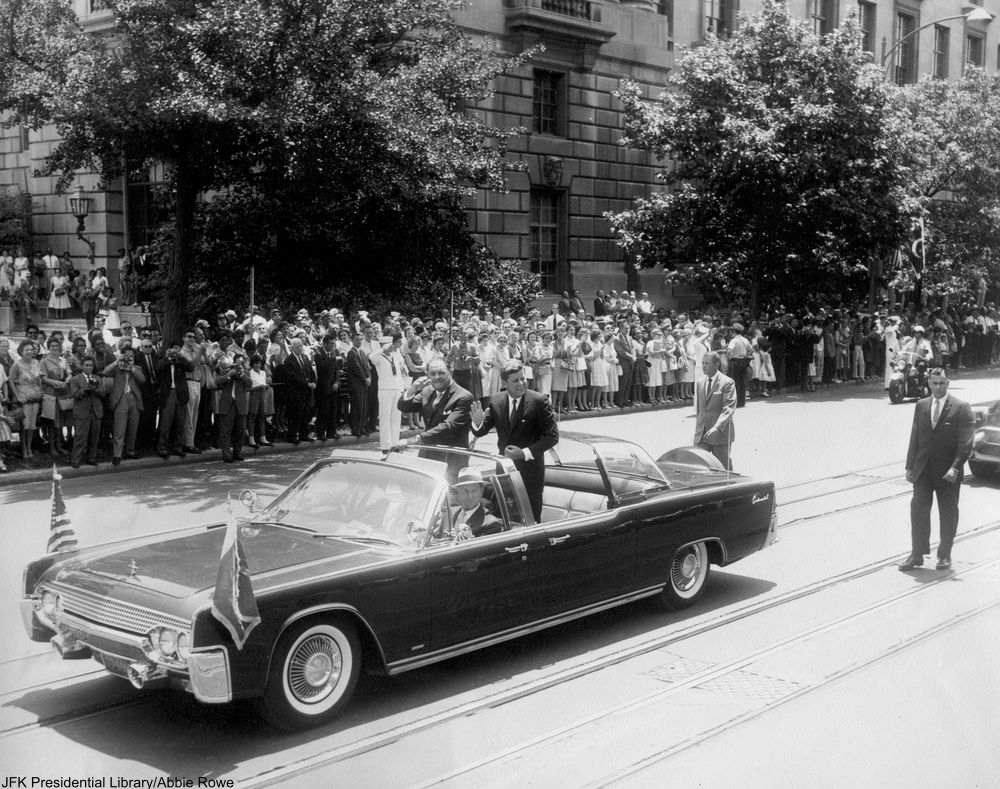 Other modifications included 2 radio “telephones,” a hydraulic rear seat that could elevate the POTUS (for waving), extra interior lights for visibility, and lights and sirens similar to what a police car would have. The President’s Lincoln was made 3.5 feet longer in the middle to accommodate larger seats, fold aways seats, and rear-hinged back doors. In 1963 the grille from a 1963 model was added just to make the whole deal look completely up-to-date.

By comparison, today’s official state vehicles often have bullet proof doors and glass, as well as secret locks and Kevlar tires. The Secret Service back in 1961 was operating under a completely different set of assumptions about safety than would only become standard in the years after Kennedy’s assassination. But, there is some evidence that President Kennedy might have run the same risks even if the different tops had been bullet-proof since he always enjoyed riding with the top down, even in the rain.

After the assassination of President Kennedy in 1963, the same Lincoln Continental remained in service as the Presidential limousine. President Lyndon B. Johnson was carried to his second inauguration in the car, with modifications of course. At the time it was calculated that to update the Lincoln was cheaper than building a new Presidential limo. 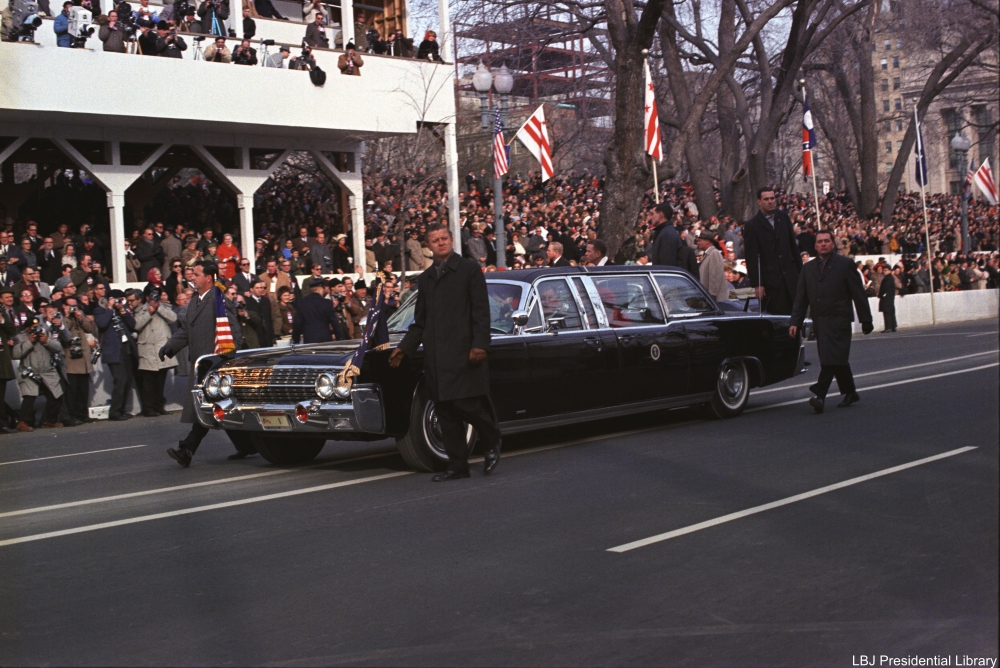 1965 Inaugural motorcade of President Lyndon B. Johnson. Notice the Lincoln has been beefed up with reinforced windows and armored panels by this time. Via/ LBJ Presidential Library

Operation “Quick Fix,” the code name for the fortification of the Lincoln following President Kennedy’s death, included modifications that made the vehicle a much more sensible car for the POTUS. The passenger areas were fully armored, a bullet-proof top now was permanently secured to the top, and bullet-resistant glass covered the windows, as well as getting a new paint-job. The changes brought the car into the modern era. 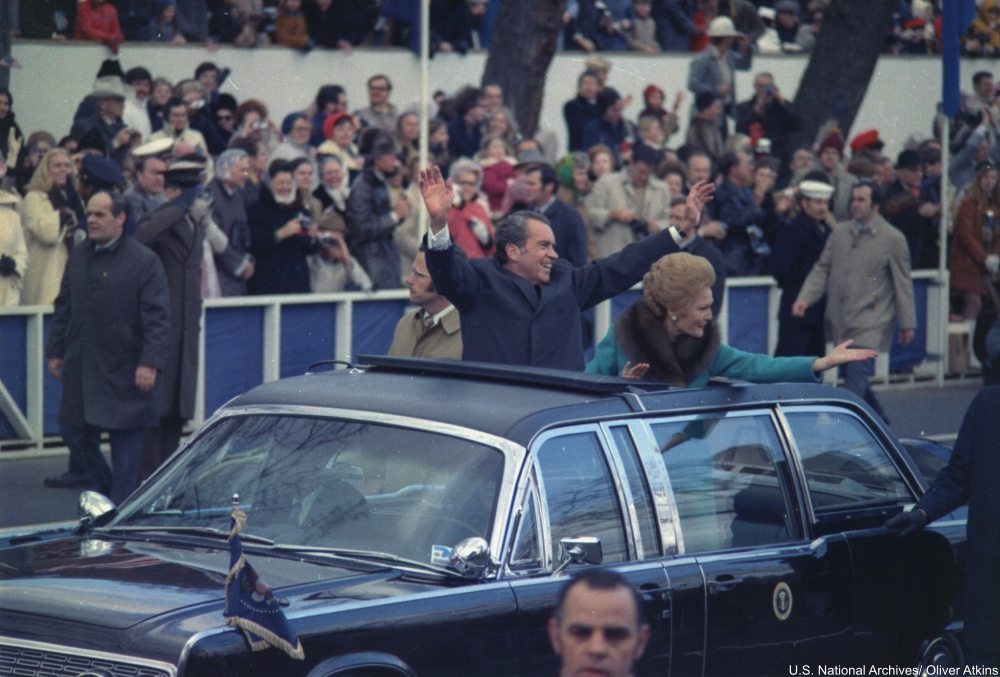 President Nixon and the First Lady wave at crowds from the fortified Lincoln Continental in Washington D.C. in 1973. Via/ U.S. National Archives

Not only was the Presidential Lincoln used by Lyndon B. Johnson, but it was also used by President Nixon. The car remained in use in an official capacity until 1977, at which point it was donated to The Henry Ford Museum where it is still on display.

While most unused parts of the original Kennedy-era car were destroyed to prevent a black market trade in assassination memorabilia, the windshield (pocked with bullet holes) resides at the National Archives. Of course, the destruction of parts of the car has also fed into conspiracy theories surrounding the assassination.

If you enjoyed this click “Next Page” to see the real story behind Jackie’s iconic pink suit!