We will never forget the Titanic disaster and the 1,514 victims who lost their lives aboard that April night in 1912. And, even over a century later- stories, accounts, and photos from the tragedy elicit strong emotions from even the most impassive cynic. But, many of us have never have heard of the SS Eastland, a ship that in 1915 took the lives of 844 people while she wasn’t even sailing! 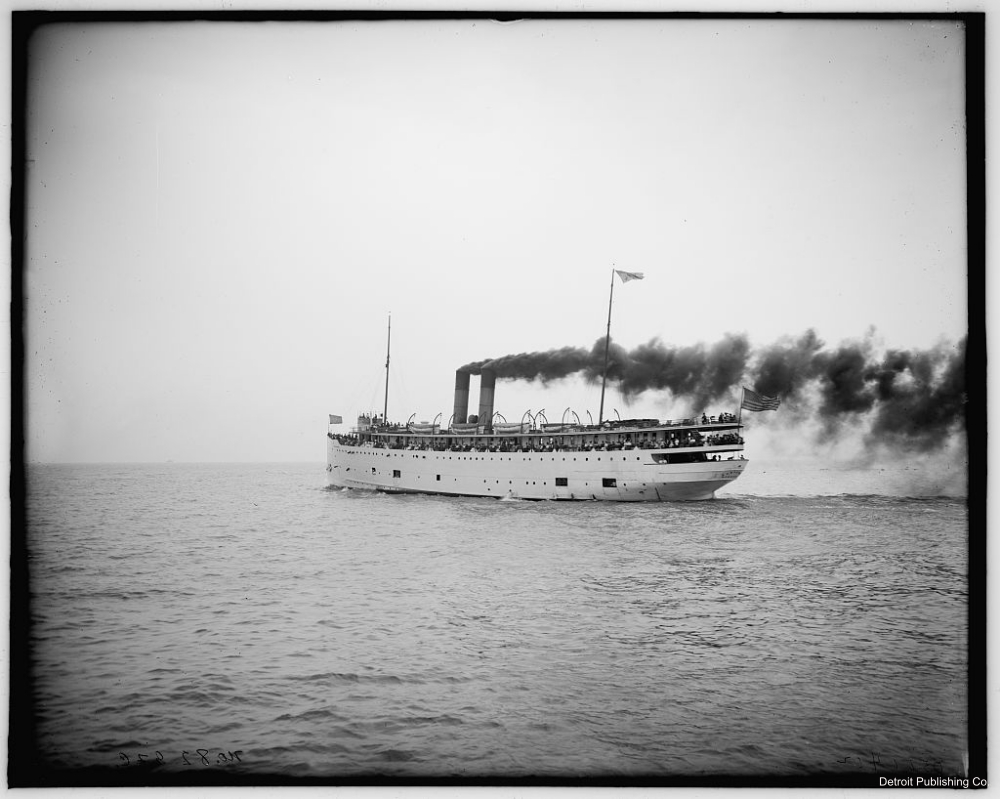 It was on the Chicago River the morning of July 24th, 1915, that the steamer ship Eastland was docked, awaiting a trip to Michigan City, IN. Aboard the ship were 2,500 passengers, many of them working class immigrants who were eager to go on a company picnic for the Western Electric Company. The vessel’s maximum passenger limit had recently been increased, a measure that, had safety standards been more rigorous, might not have been allowed. It would later be claimed in court by the ship’s designers that she was only ever intended to hold 500 passengers.

But, the recent Titanic disaster and the obvious need to have ample lifeboats aboard every ship meant that the SS Eastland was now equipped with 11 lifeboats and 37 life rafts, totaling thousands of extra pounds, and most of that added weight was near the upper deck. We might assume that the addition of so many escape boats would have helped the passengers in an emergency. But, in the case of SS Eastland, the boat’s design relied on ballast tanks to keep her righted, tanks which frequently malfunctioned. The ship listed often, seemed unstable to many who boarded, and at least twice before had almost capsized.

Yet nowhere in the newest safety regulations was weight distribution specified. Furthermore, because of the added life vessels, the ship could now legally carry even greater numbers of passengers. All of this meant that when SS Eastland began to tip, the stakes were even higher. 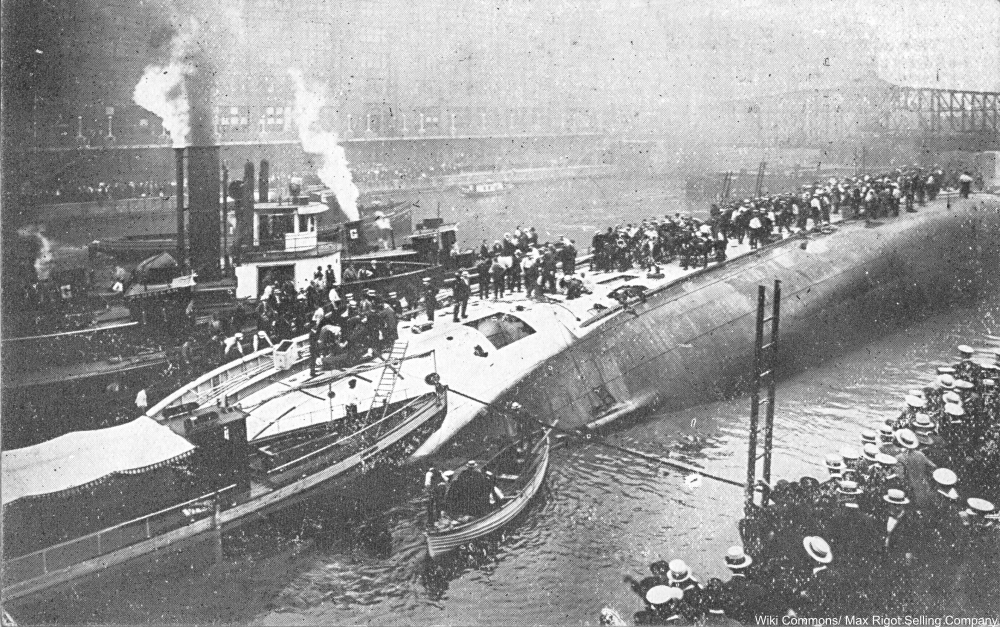 Sections of the hull were removed to allow for the rescue and retrieval of passengers. Via/ Wiki Commons 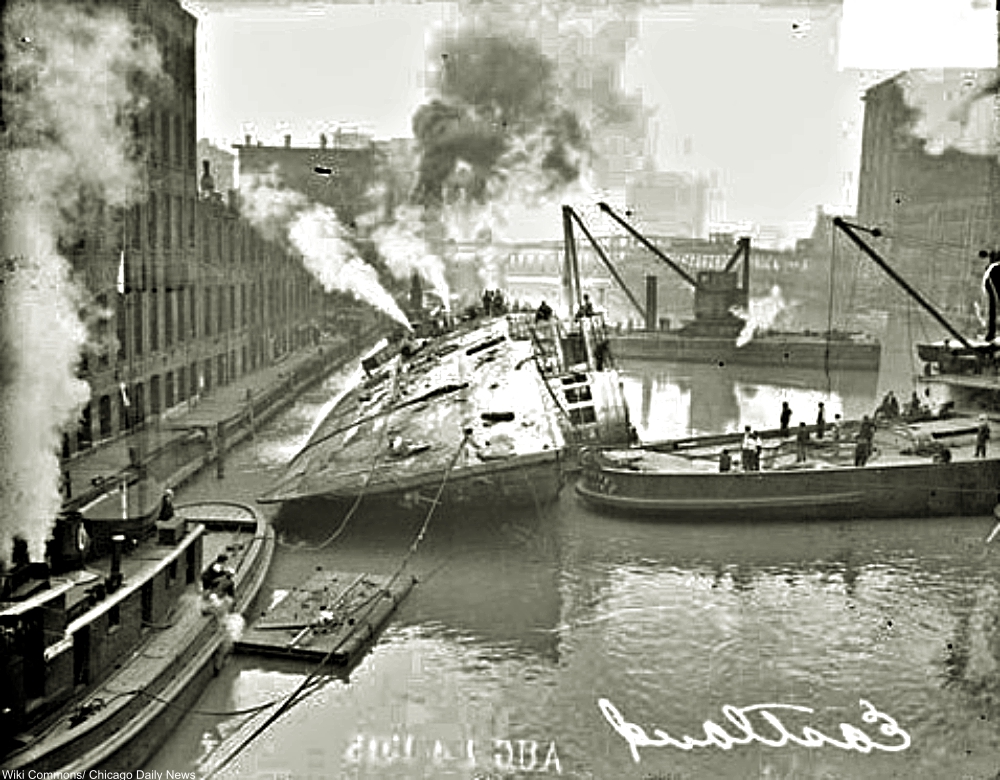 SS Eastland went from being docked to keeling over in no time at all. Surviving passengers recalled the speed with which the vessel filled with filthy water from the Chicago River, a waterway which received all manner of industrial and personal waste at the time. The irony of this story is that the lifeboats which had been intended to save lives actually contributed to the capsizing of SS Eastland– an event which occurred so quickly that the lifeboats could not even be deployed for the passengers. 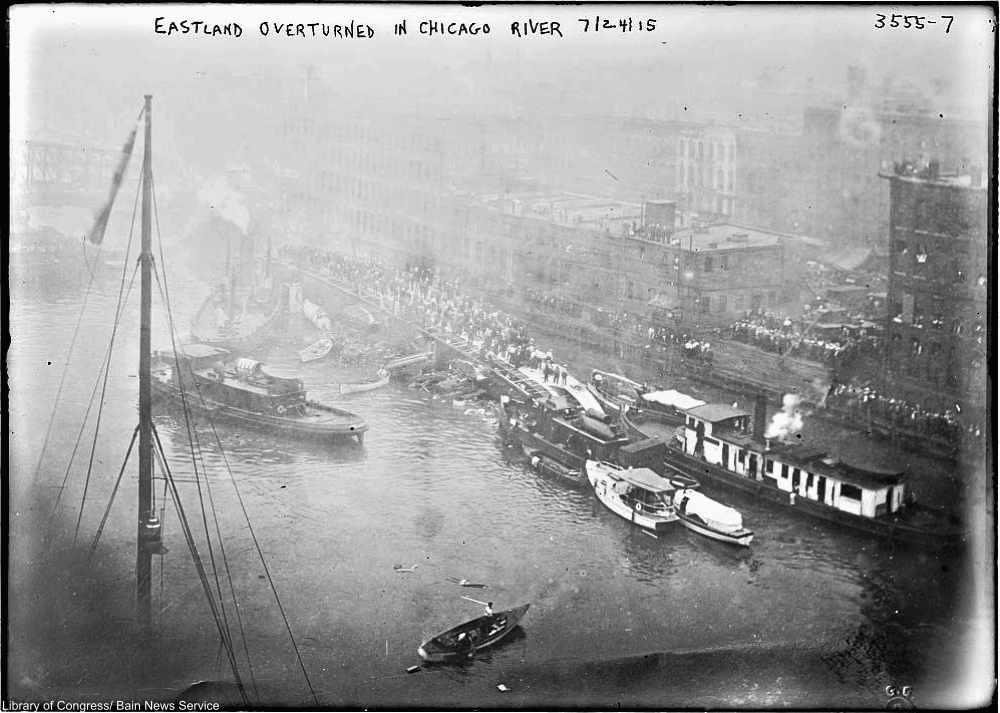 Because she was still so close to the dock, some passengers were able to jump, climb, or swim to the dock. However, the many passengers who were trapped below deck and in cabins were inundated with falling objects and rushing water. Some managed to survive until rescue crews could come to their aid. Emergency escape ports were cut into the side of the ship. But, for 844 people help came too late.

In a chilling twist, the coroner’s findings were that many of those who lost their lives aboard SS Eastland were not drowned, they were suffocated by the masses of objects and bodies that fell upon them as the ship turned violently onto her port side. 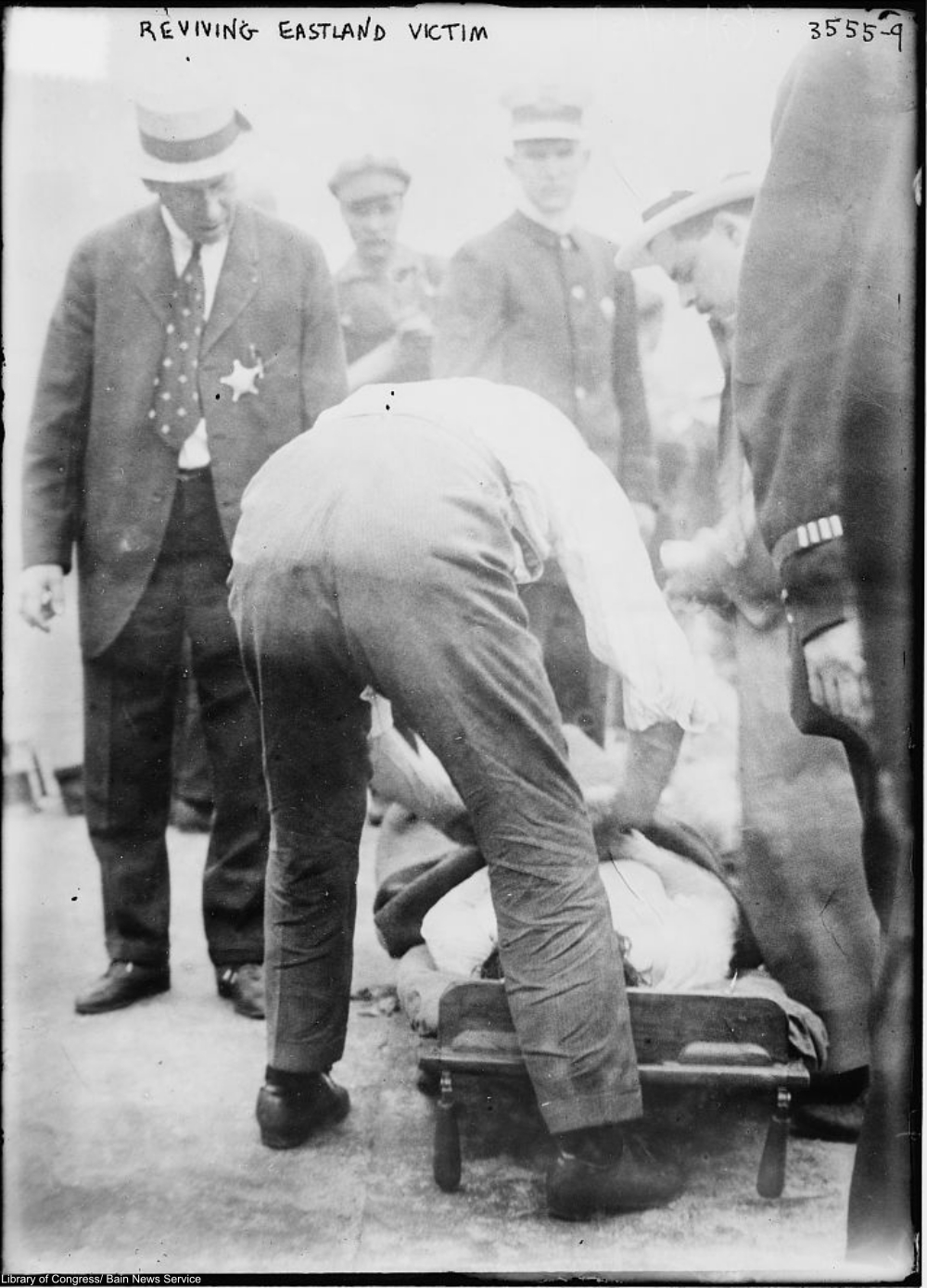 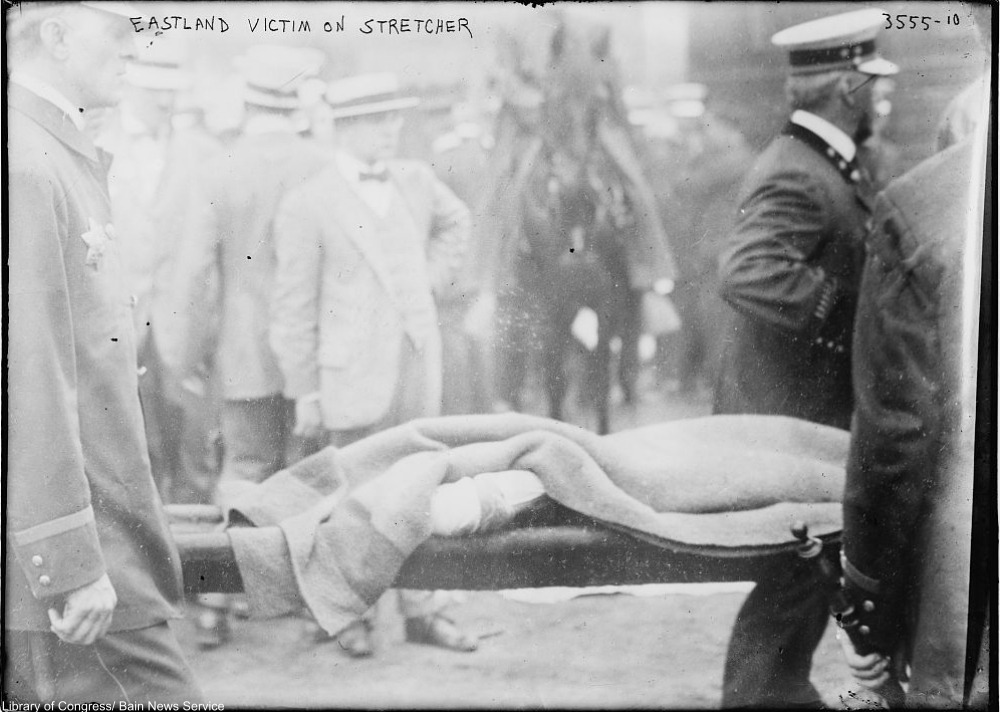 Rescue operations continued well into the night and in the days following the keeling over of SS Eastland. Via/ Library of Congress

As one of the most deadly passenger ship catastrophes in U.S. history, the poor safety management resulted in many working class passenger deaths. Unlike RMS Titanic, whose glamorous reputation made the disaster a world-wide news story, the overloaded Eastland garnered less media attention.

Subsequent trials ruled that while the owners and operators of SS Eastland may have be negligent, they were not in conspiracy to injure passengers, though for the families of the victims there could hardly have been much difference. SS Eastland was later sold to the US Navy and was re-named the USS Wilmette and used for stateside training purposes during World War I. She was scrapped shortly after WWII. 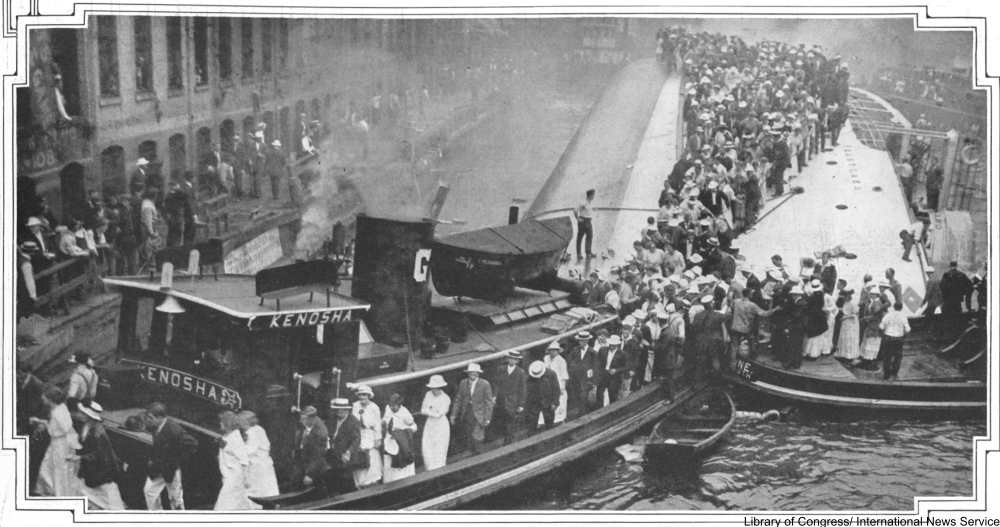 Original caption to this New York Times photo: “Eastland survivors…escaping to land by using the tug Kenosha as a bridge.” Via/ Library of Congress

While we don’t hear much about this great loss of life these days, the Eastland Disaster Historical Society maintains the records of victims, survivors, and their families, as well as engaging in public education so that we don’t forget the tragedy of that fateful day in July of 1915. There’s even an app from the Chicago Tribune that allows visitors to the disaster site to view historical images of the rescue superimposed over the area today. While we cannot change the past, it is comforting to know that there are a few organizations who are keeping the stories of the victims alive. For more forgotten tales from history click here.