If Your Doctor Uses These Instruments, You Might Need A New Doctor!

There’s a certain charm that comes with ladling soup out of an antique dinner service, or with unlocking your cabinets with a 200-year-old set of handmade keys. Antiques connect the present with the past and reassure people with their vintage craftsmanship. All of that, however, goes right out the window in the doctor’s office. 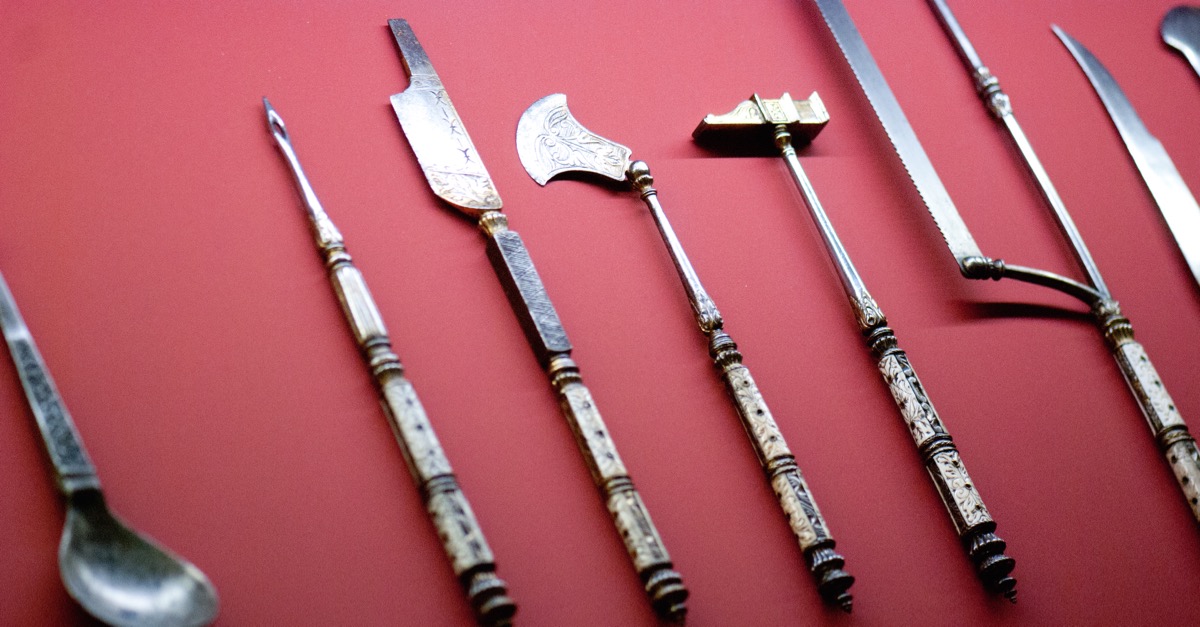 There, a jittery patient expects to see technology so up-to-date that the dozen or so patents on it are still pending. The ideal medical office has lasers rigged up to quantum nanocomputers that interlink with satellites and are powered by cold fusion. Given the history of medical technology, it’s understandable that “vintage” means something quite different to a doctor than it does to, say, a butler. This is a pity, because some vintage bits of medical kit were genuinely amazing, if only for what they tell us about medical treatments of the past.

For thousands of years, medicine was largely a matter of casting horoscopes and encouraging stroke victims to drink mercury. Prior to the 19th century, doctors’ interventions were substantially limited to bleeding, amputation, purgatives and the occasional enema. If you were sick with something that couldn’t be treated with a chop, a poke or a trip to the bathroom, you were out of luck. What they lacked in technique, however, surgeons of the past more than made up for with their toolkits. 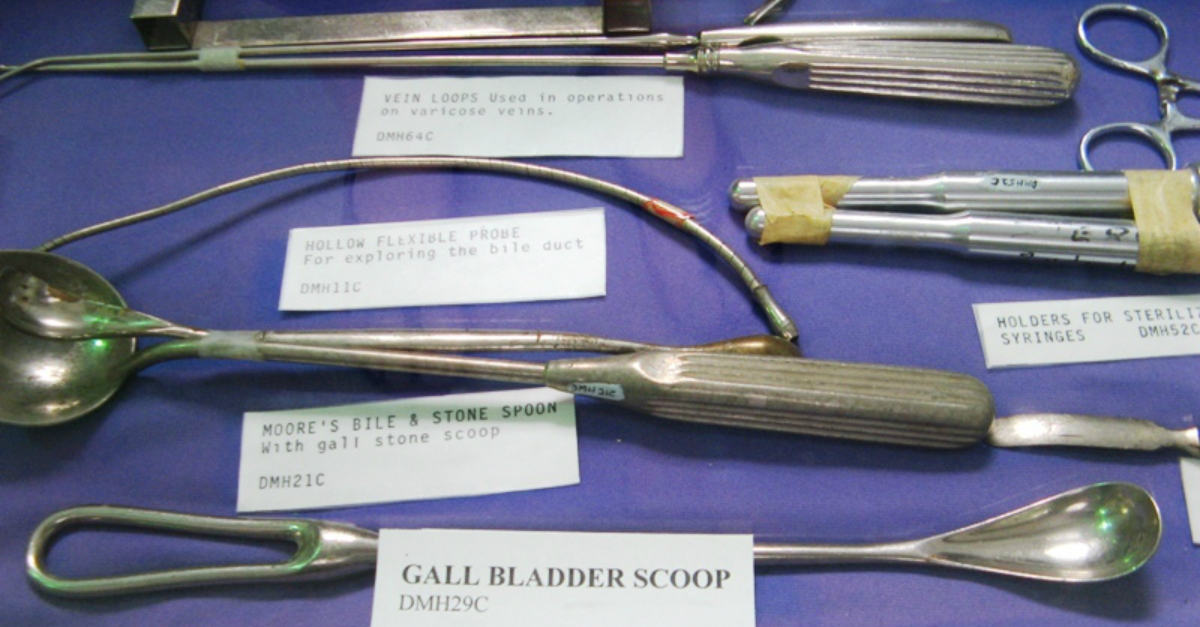 Amputations were among the first medical procedures ever done. It doesn’t take much scientific research, after all, to figure out that a leg mauled by a lion has to come off. The practice was still standard for even minor injuries and infections as late as the 1870s. Surgeons of the Napoleonic era and before often carried huge, heavily ornamented bone saws that were more flourish than function. These implements were burdened with the rococo mania for covering every square inch of a surface with elaborate carvings, making them awkward to handle.

The rise of national armies motivated a shift in the design of these saws. The oversized, clunky works of art of 18th-century warfare gave way, in the 19th century, to sleek, lightweight saws that could slice right through flesh and bone and serve an army of hundreds of thousands of men.

Bleeding was the other great remedy of prescientific medicine. Under the four-humours model of medicine, in which every ailment was caused by too much or too little of a fluid, draining off excess blood was practically a cure-all. To get that dangerous blood out of your body, medical technologists developed tools of terrible beauty. 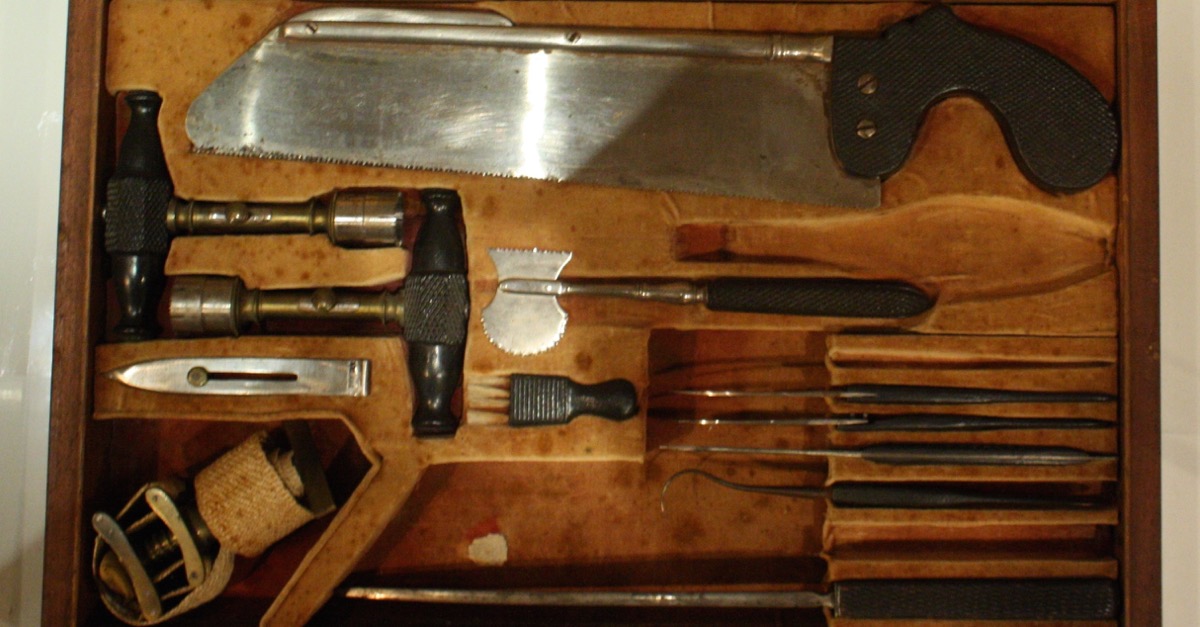 Lancets and leech cups were standard-issue surgical implements before the germ theory of disease, and even for a while after. Modern lancets are just pointy needles, hopefully sterile, but antique versions were delicately crafted blades that could be exquisitely sharp. German doctors even developed a spring-mounted lancet, similar in many ways to modern diabetes styretes.

Another bloodletting tool was the cup. The cup was just a glass bell, much like a cognac snifter, but it was used in a rather distressing way. To cup a patient, doctors would hold a flame inside the overturned cup to evacuate the air. Then, with a sudden motion, the doctor would drive the cup down onto the exposed back or thigh of his patient. As the air inside the bell cooled, it contracted, drawing blood to the surface like a medically induced hickey. For extra effect, the doctor sometimes scraped the raised skin with a razor and cupped it again, drawing large amounts of blood.

The history of medicine, unlike the history of tableware or brass clocks, has a very dark side. It’s impossible to regard medical antiques without a minor shudder at the thought of being the subject of their application. This dark legacy makes these amazing implements all the more beautiful for the shadows they cast on the modern imagination. To learn more about antiques of all kinds, subscribe to Dusty Old Things.