Color in the Kitchen in Days Gone By

We’re always struck by how much color was brought into vintage kitchens by the tools, the tins and even bright aprons. Other than the 1950’s brief excursion into pink and pale blue cabinetry, most kitchens after the turn of the century were largely white.

We never can overestimate the impact that the public heath and sanitation movements had on how homes were organized and decorated. Advances in the understanding of the causes of diseases, and large scale epidemics, terrified parents. Women who before had largely left cooking and the maintenance of the kitchen to household servants were suddenly being made responsible, through magazines and public health lectures and pamphlets, for the cleanliness of their kitchens. Epidemics, especially those of diphtheria and the Spanish flu, brought a widespread panic that resulted in efforts to make kitchens more hospital-like with white enameled and porcelain surfaces that could be easily cleaned. Containers were made insect proof with a wide use of tin. Tools that were made of metal replaced older ones of wood. Wooden floor surfaces were covered with tile or the new Linoleum.

Within this often stark setting, the colors of tools and tins…and later the aprons…still charm us. Even a cast iron apple peeler, now black and perhaps originally so, would have been peeling red or green or golden apples. Color was there. It’s something we can’t live without. 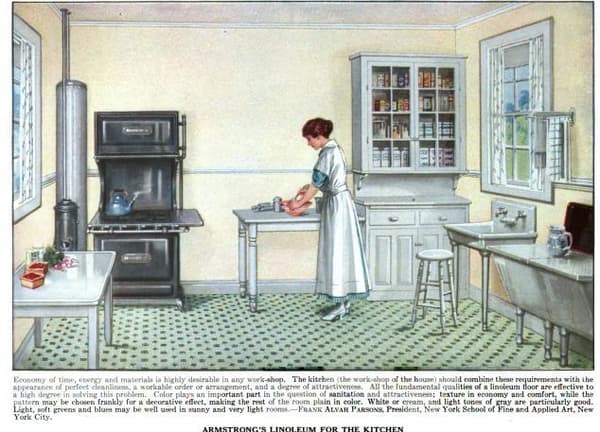 (photo credit: slumberland.org) A 1918 Armstrong ad for kitchen linoleum. Notice the phrases about “perfect cleanliness” and “Color plays an important part in the question of santitation and attractiveness…” 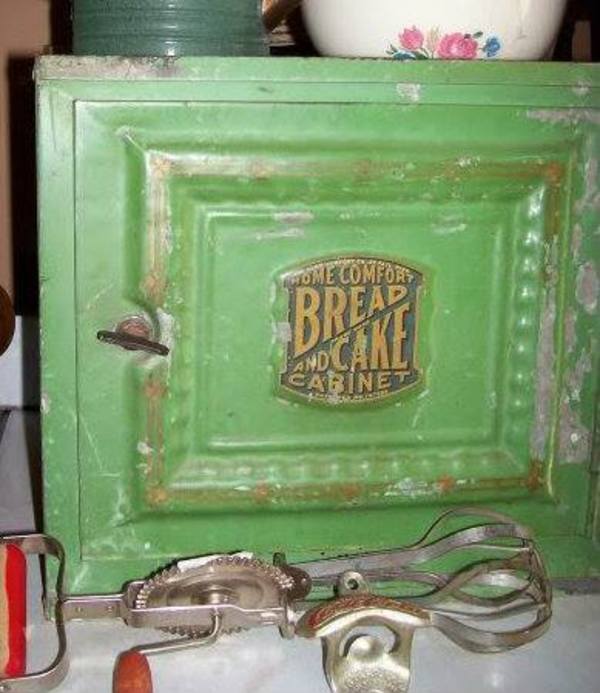 from Carol Boyd: “Home Comfort Bread and Cake Cabinet I purchased for $20 at a City Wide Yard Sale in Wall, South Dakota.”

Carol’s antique metal bread and cake cabinet dates to about 1919, right after the Spanish flu really accelerated the movement for kitchen sanitation. Her’s has the original front label and we think it is the original jadeite color–which was very popular at that time. One source we’ve seen indicates that the Home Comfort Company was in Saint Paul, Minnesota. 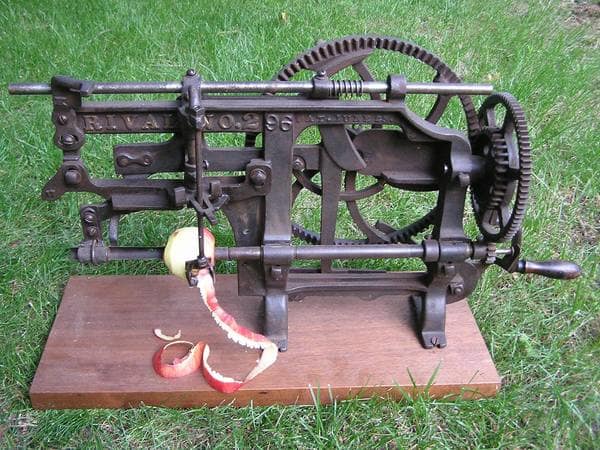 Randy’s fantastic antique apple peeler does pre-date a bit the “white kitchen” movement. It was, according to the research we’ve found, patented in 1889. It is, however, highly probably that the letters were brightly painted. One we’ve seen had the “Rival No.296” in gold. They came mounted on oak bases and could peel and core hundreds of apples in a very short time. Although they are sometimes referred to as commercial apple peelers, families that “put up”, or dried, a lot of apples used them.

Randy’s peeler looks to be in great condition. It’s a gem and it’s so nice that it still works! 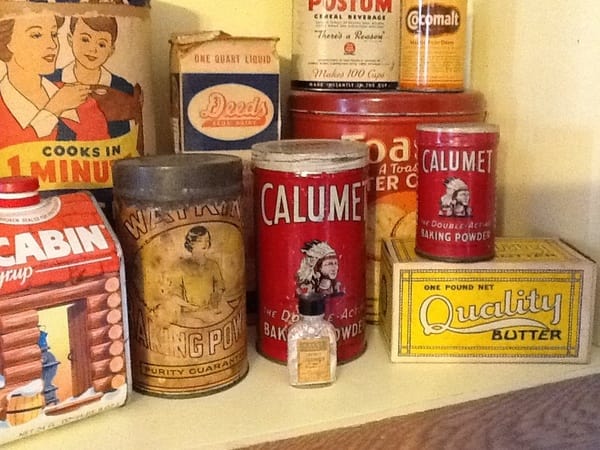 from: Penny Miller: “A small part of a collection of Vintage advertising tins.”