Civil War rations were based around recipes that were common at the time, with some very major differences. While times of scarcity were more common in the 19th century, the soldiers who served during the Civil War had to endure repetitive ingredients kept long beyond their ideal freshness, served by cooks who didn’t always have a plan or help or enough ingredients. Or many times they were simply handed their rations and expected to prepare them with few cooking utensils. Read on to find out what the Civil War soldiers ate and how they made their meals. 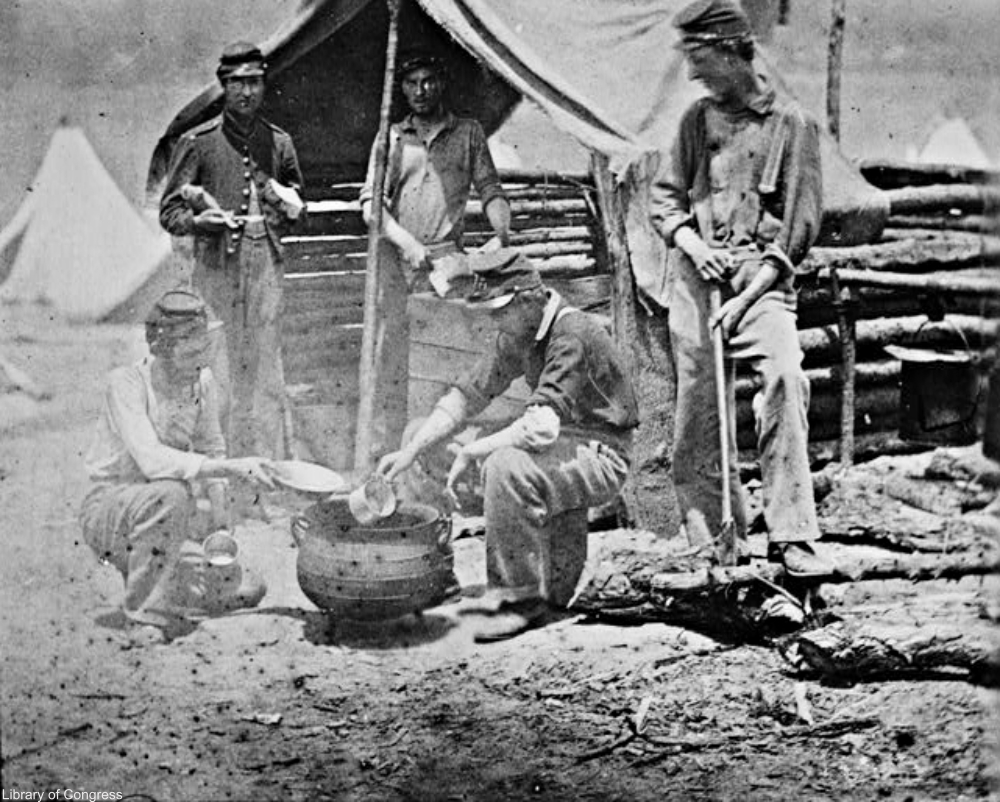 Like the settlers, pioneers, and cowboys, Army meals centered around portable staples that kept for a long time. Apples and salt pork were key ingredients. One of the most ubiquitous foods on the front was hard tack. Pioneers often didn’t have access to wheat flour and so were often dependent on cornmeal to make baked goods. But, for the Union soldiers, the dry and long-lasting hardtack was crucial. However bland and tasteless, it kept many a soldier from starving to death. 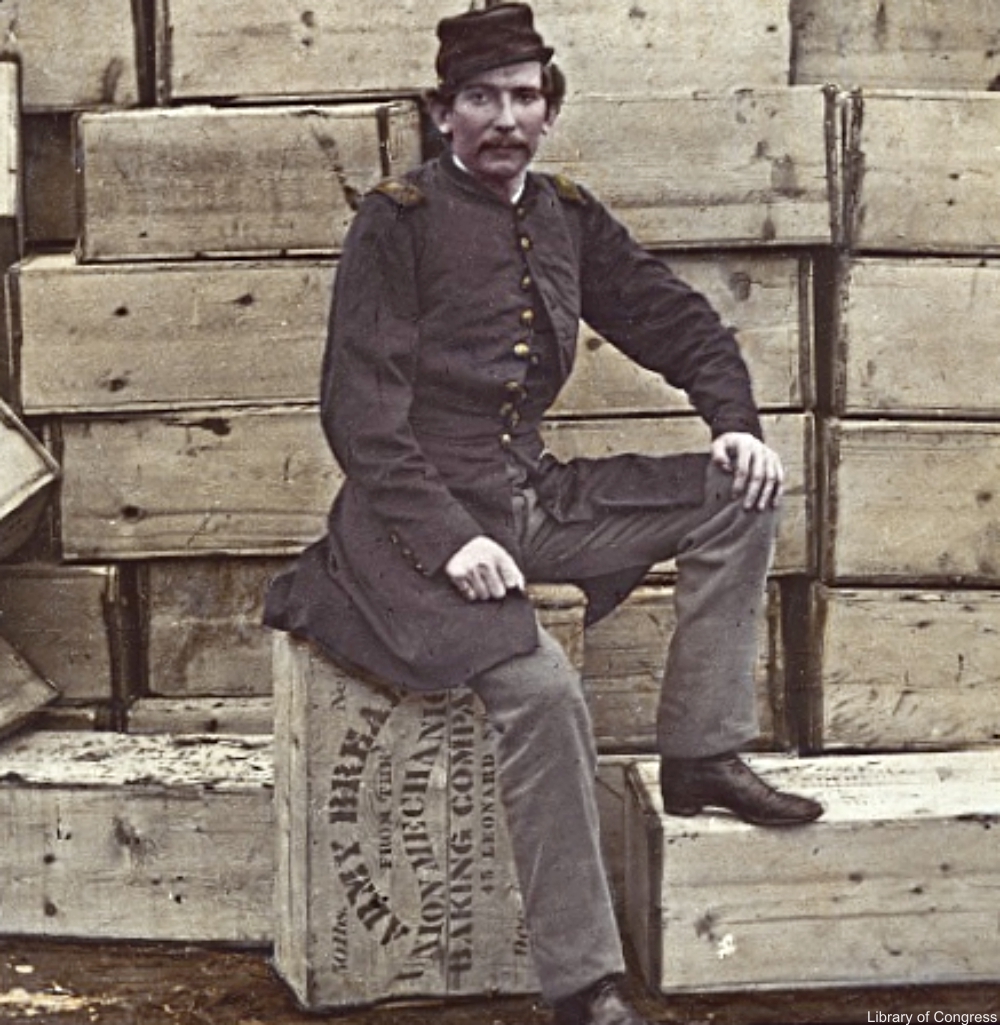 Union soldier surrounded by boxes of hardtack. Via/ Library of Congress

Flour, water, and maybe salt were the only ingredients in hardtack. The hardtack were “docked” with holes, much like our modern crackers, so that they could completely dry out in the baking process. Baked twice, the resulting cracker was so hard as to need liquid to make them fit for chewing. So they were frequently dunked or crushed into hot coffee or doused with water and then fried in grease, or sometimes put into a bowl of stew. The soldiers were desperate to give these chunks of serviceable “bread” any kind of flavor at all.

Union soldiers were issued 9 squares per day, with conflicting reports as to whether this left a man still hungry. Sometimes infested with bugs, this was still the most reliable food source that the troops had from day to day and it kept in all but moist conditions. Get the recipe and find out even more about this military staple here. 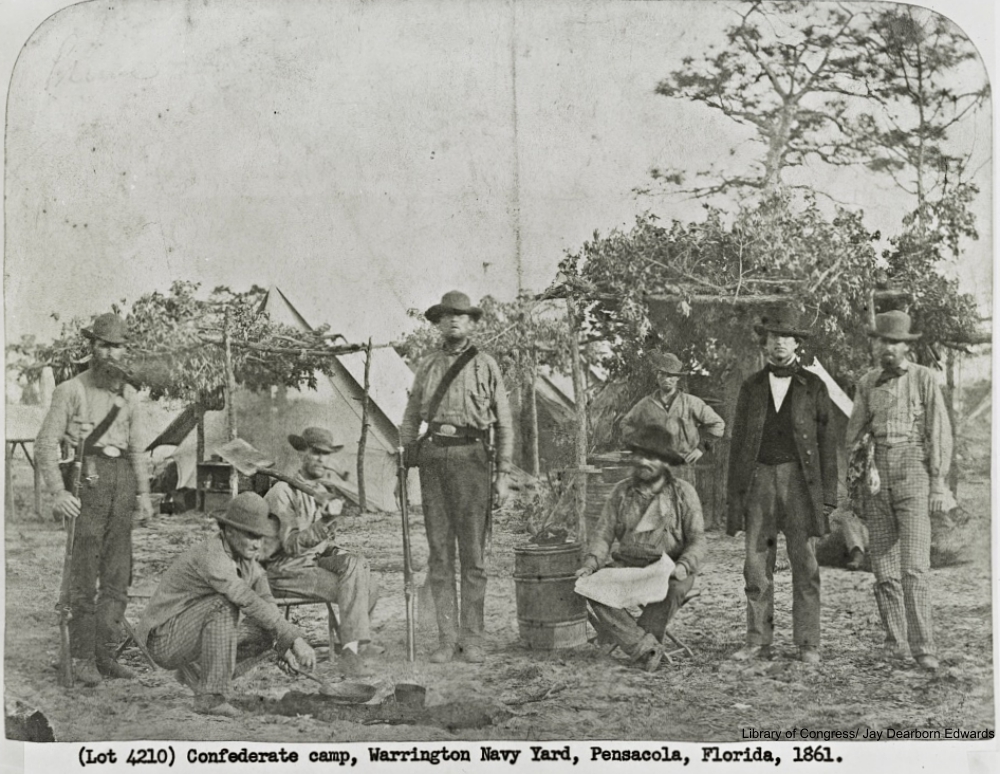 Confederate troops had no such thing as wheat flour because of the blockade, so instead relied on a white cornbread known as Confederate shortbread. These dodgers or corncakes would have been a staple for the Confederate troops, sometimes made crudely on their bayonets over the fire. See the recipe here.

While supplies on both sides of the Mason-Dixon were often scarce, ill-prepared, or spoiled, there is no doubt that the Union soldiers had an easier time of it. The lack of food available in the South was crippling to the Confederate troops. As cold and hungry and tired as the Union soldiers were, they did have consistent supplies and a greater variety of foods, unlike the Confederate troops. Some have even speculated that food is what helped the Union to win the war. In the end it might have all come down to rations. 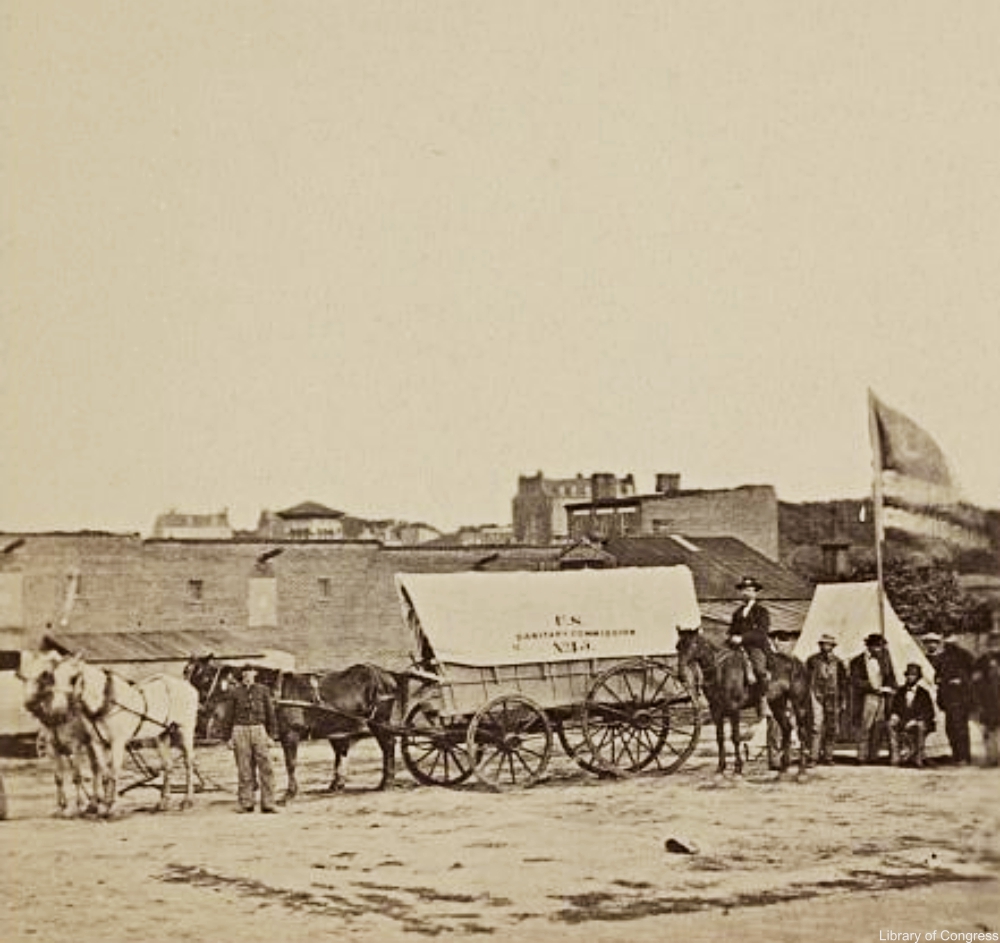 Looking for ways to lighten their load and increase efficiency, the War Department toyed with a new concept. Made with the first form of instant coffee, or as the Union Army called it, “extract of coffee” the troops were pleased to have something coffee-ish with them on the battlefield. When the War Department for some reason ordered no more to be bought, the troops apparently protested until the problem was rectified, perhaps facing no coffee at all. Some formulations came with milk or sugar in and some were part chicory root, but compared to water, the instant paste coffee formulation was a fine choice. It was added to hot water to make the drink. 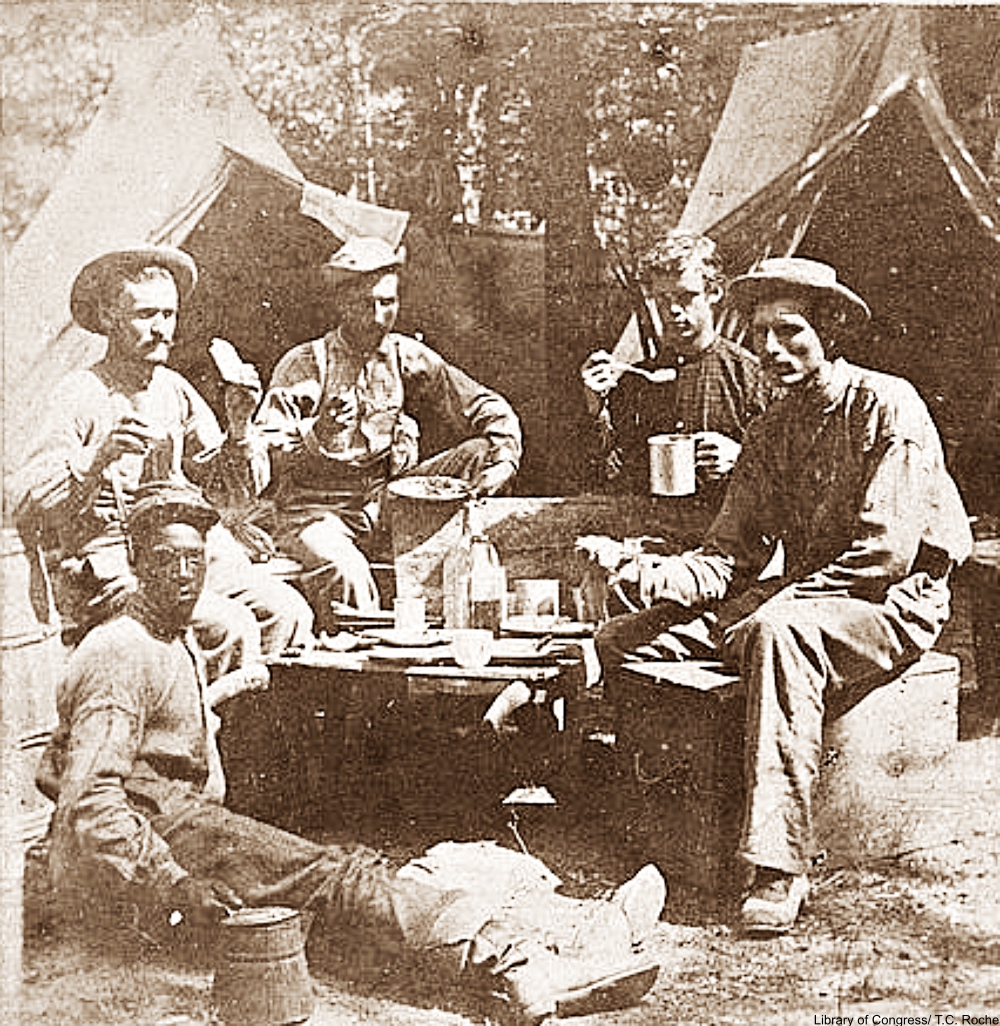 But there was no substitute for the real thing and real coffee beans were once again rationed. The importance of coffee to the troops cannot be overstated. Coffee kept the troop’s spirits up and provided them with something warm to drink and to dunk their hardtack in.

Confederate troops had to make due with a mixture of chicory root, acorns, sweet potatoes, and/or peanuts that supposedly substituted for coffee. The blockades made it so that the rare pound of coffee that made into the South was priced almost as high coffee today!

Before the advocation of dedicated and trained staff and better preparations, the U.S. Army had a slapdash approach to dealing with food preparation. The Sanitary Commission oversaw the army’s wartime foodstuffs, but had many flaws. Unskilled cooks might inadvertently make the troops sick through poor hygiene, or might waste food due to lack of time or planning. Problems like these were addressed by a hotel owner named James M. Sanderson who offered his services to the U.S. Government in 1861. 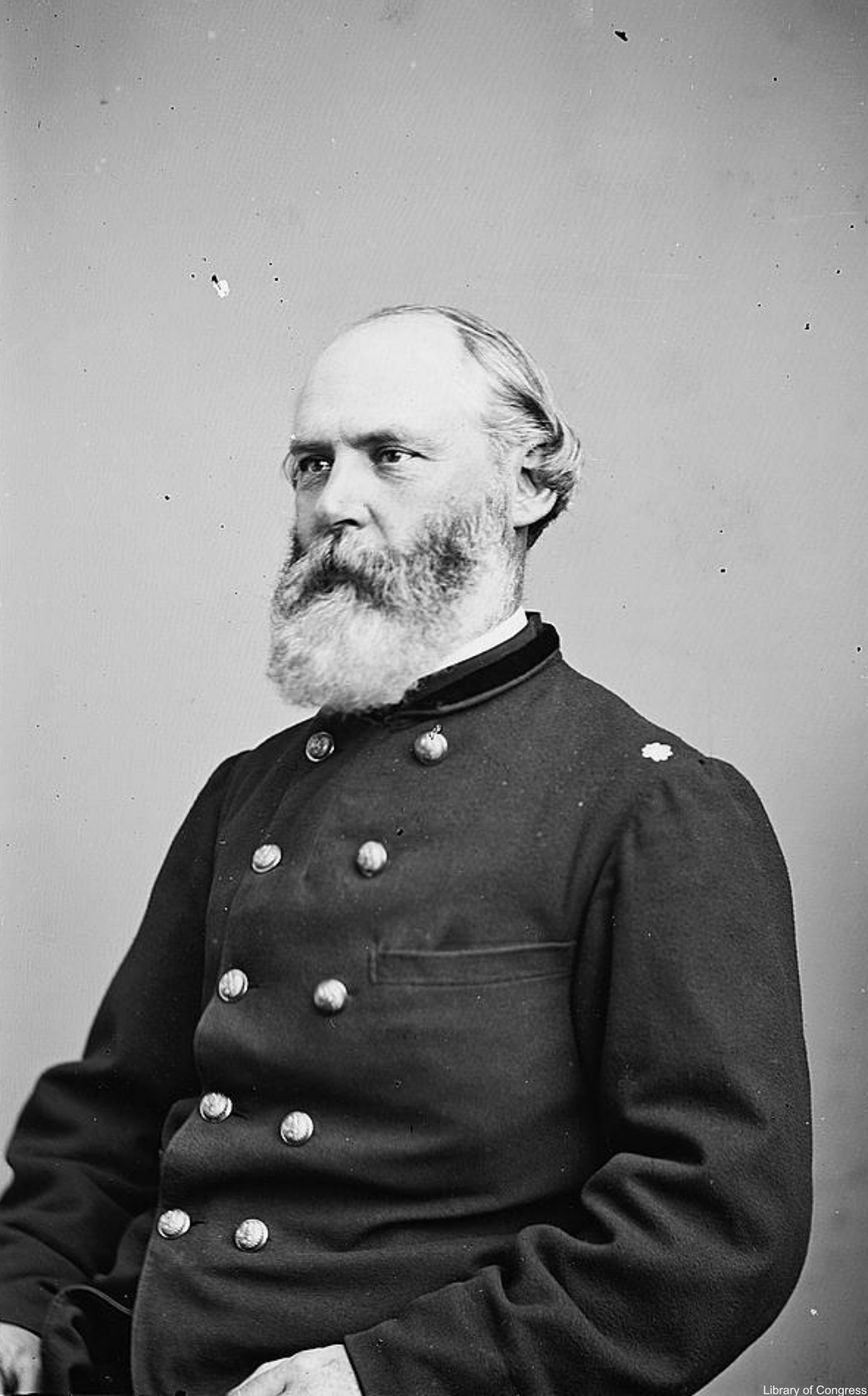 Sanderson thought he could improve upon the Sanitary Commission’s standards of meal production. While ostensibly concerned with maintaining the supply and quality of food for the troops, the reality of the Sanitary Commission was often illness, waste, spoilage, and scarcity. Sanderson sought to change all that and introduced some means by which to make the soldiers’ meals safe and consistent, including a recipe and camp cookery book published by the U.S. Army and the Subsistence Department.

As a government-issued ration dating back to the Revolutionary War, salt pork was a major player in the diets of Cvil War troops. Heavily salted pork belly is brined and the resulting product is crusted with salt and keeps well for long periods of time- ideal for an army on the go. But, salt pork has to be soaked in order to remove the salt, sometimes multiple times or overnight. From then it can be fried, made into a stew, or sliced and then roasted over an open fire using the ramrod for your rifle. The grease for frying hardtack or cornmeal or anything else often came from salt pork. You can see how salt pork is made right here. 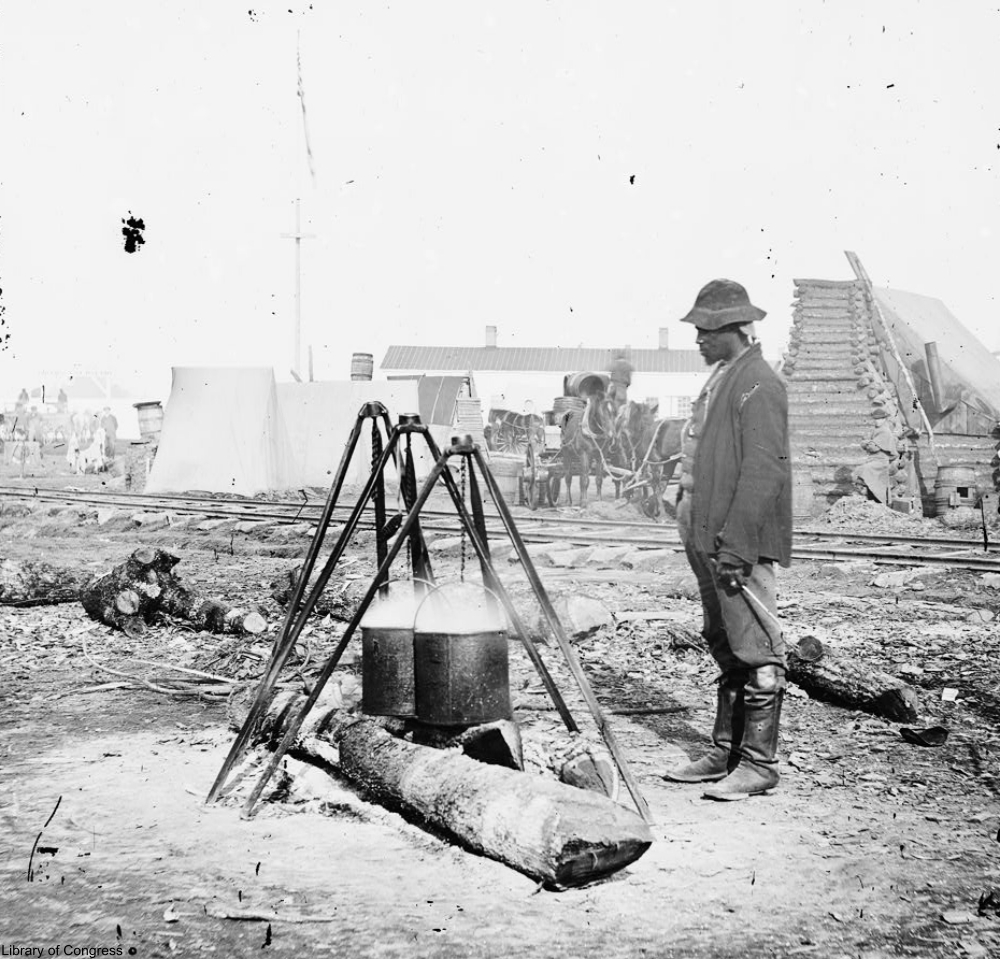 The other option when fresh meat wasn’t available was to eat beef that had perhaps spoiled- not an appetizing meal, though at times the troops had no other choice. In a stew, desiccated vegetables would have been added to give some kind of texture and perhaps flavor. It wasn’t like we might think of dried veggies today, but a cake made from a mixture of shredded vegetables, then pressed and dried. One imagines that these vittles in a stew would have hardly been noticeable as proper and delicious vegetables. They were often boiled by the soldiers as well and these cakes or cubes earned the name “desecrated vegetables” among the soldiers. 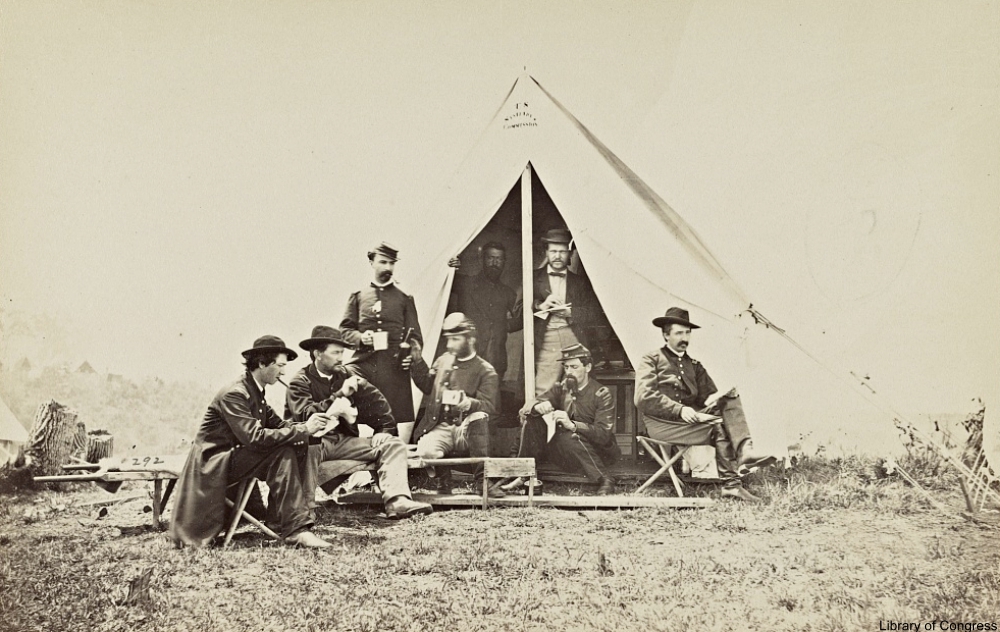 When they were still hungry or short on supplies, soldiers often foraged the land or even stole from nearby farmers in order to feed themselves. Starvation, scurvy, and general fatigue were common on the battlefields. The small amount of food they did have kept them going through incredibly horrific and bloody battles in what can only be described as a hellish time for any Civil War soldier.