Can You Help Identify? February 16

Every once in a while we like to feature some of the antiques that have been shared with us by readers who have asked help from our community in identifying the piece. The nice thing about social media is that we all get to give our ideas. We all come from differing backgrounds with different kinds of expertise, interests and experience. Everyone is welcome to give their opinions…and their guesses. It’s fun, too. 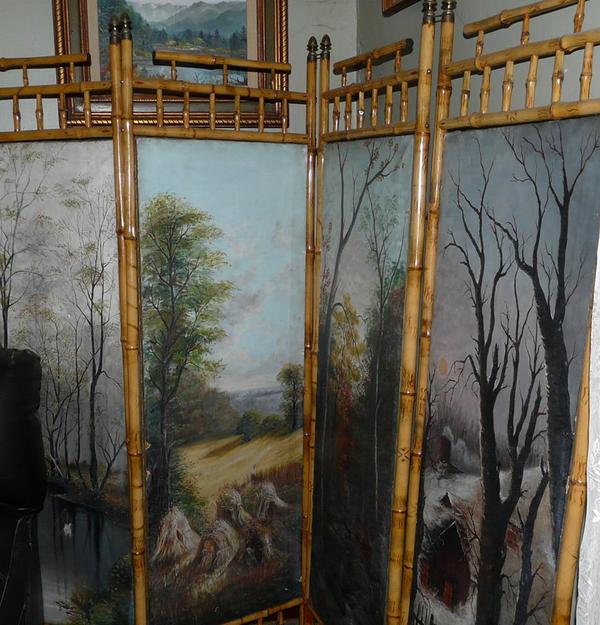 from Nancy Zern Moser: “This beautiful original room divider/screen was purchased from an estate (tag) sale. Each panel is an original oil painting and represents one of the four seasons. The owner was in her late 80s and said it belonged to either her husband’s parents or grandparents. Maybe someone can tell me something about it?”

Nancy also added that she has not been able to find a signature on any of the panels. So readers, has anyone seen panels like these? Can anyone give an approximate date based both on the bamboo screen styling and the painting genre? 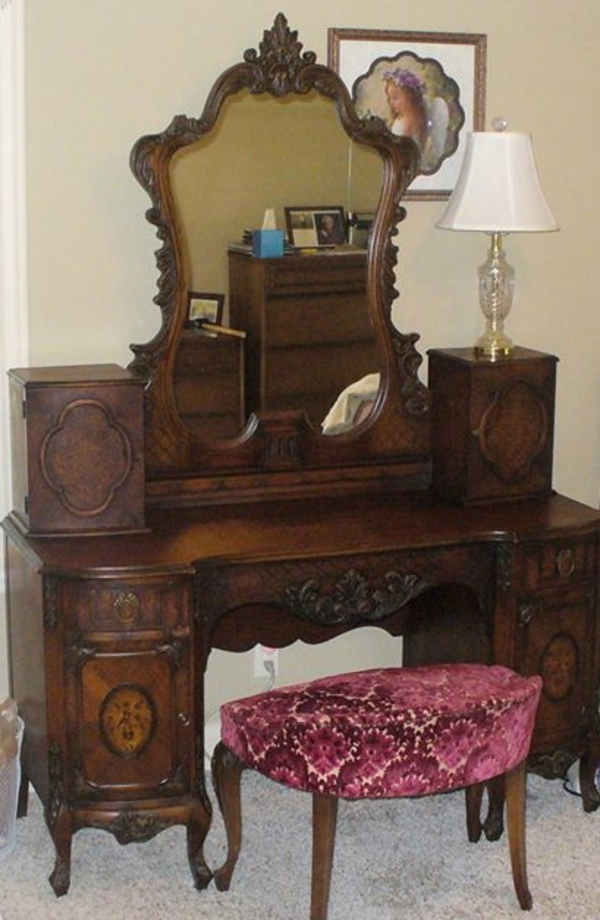 from Carol Dutton: “This is my dresser that my husband found at a Salvation Army Thrift store this past fall. It was made by Johnson & Johnson furniture co. It has the gold medallion inside the drawer. On the doors are hand done flowers on the inset on both sides. The two tall pieces on top are attached, very unusual looking I thought, but beautiful. I am trying to figure out the date it was made. The company was owned by two brothers one of which did the door insets by hand on all their pieces. I’m suspecting it may be early 1900’s. Anyone else out there have a clue? I’d love to learn more. Thanks.”

We love Carol’s dressing table! She added, too, that her husband got it for only $200. We think it is a miracle that it escaped the paint brush during the shabby chic fad period.

So, readers, does anyone know about the Johnson & Johnson Furniture Company and can anyone date the piece? There were numerous Johnson furniture companies operating in the early 20th century, the most famous of which were in Grand Rapids and Chicago. Carol’s piece looks a lot like some of the works done by the famous Johnson Furniture Company of Grand Rapids around 1915-16. That company was started by three Swedish brothers who changed their name to “Johnson”. However, we can’t find any record that they ever did business as “Johnson & Johnson”. They did produce English-looking 18th century styles in collaboration with designer Tom Handley. They also employed craftsmen from Europe for hand carving and hand painting of classical designs on case pieces.

Ideas? Who were Johnson & Johnson? Is this piece early 20th century or a bit earlier? 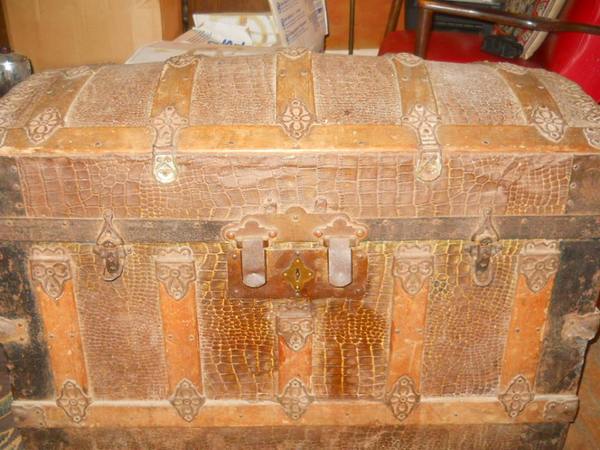 from: Sandra Albert: “Does anyone know about antique hump back chests? We got this in an auction lot. It looks to be crocodile skin with brass floral and brass crown accents, and wood strapping. Inside is papered with a religious motif on the top and red and green accents on the inside lid. We have been told this may have some connection with a royal family. There is a 6.00 written on the side. Any help would be appreciated.”

A photo of inside the lid is below:

Does anyone have any idea of about the age or origin of Sandra’s truck? What is your favorite resource for learning about antique trunks?

Thanks to everyone for joining in the fun. We’ll feature more pieces later this morning.