Three years after the stock market crashed, veterans of World War I demanded their pensions early to combat the lack of jobs and goods. It had been traditional to receive a bonus upon completing service, but their bonuses were delayed by the World War Adjusted Compensation Act of 1924, which meant that they would not receive their funds until 1945. Clearly this would never do during such hard times and the vets gathered in D.C. to fight for their money. 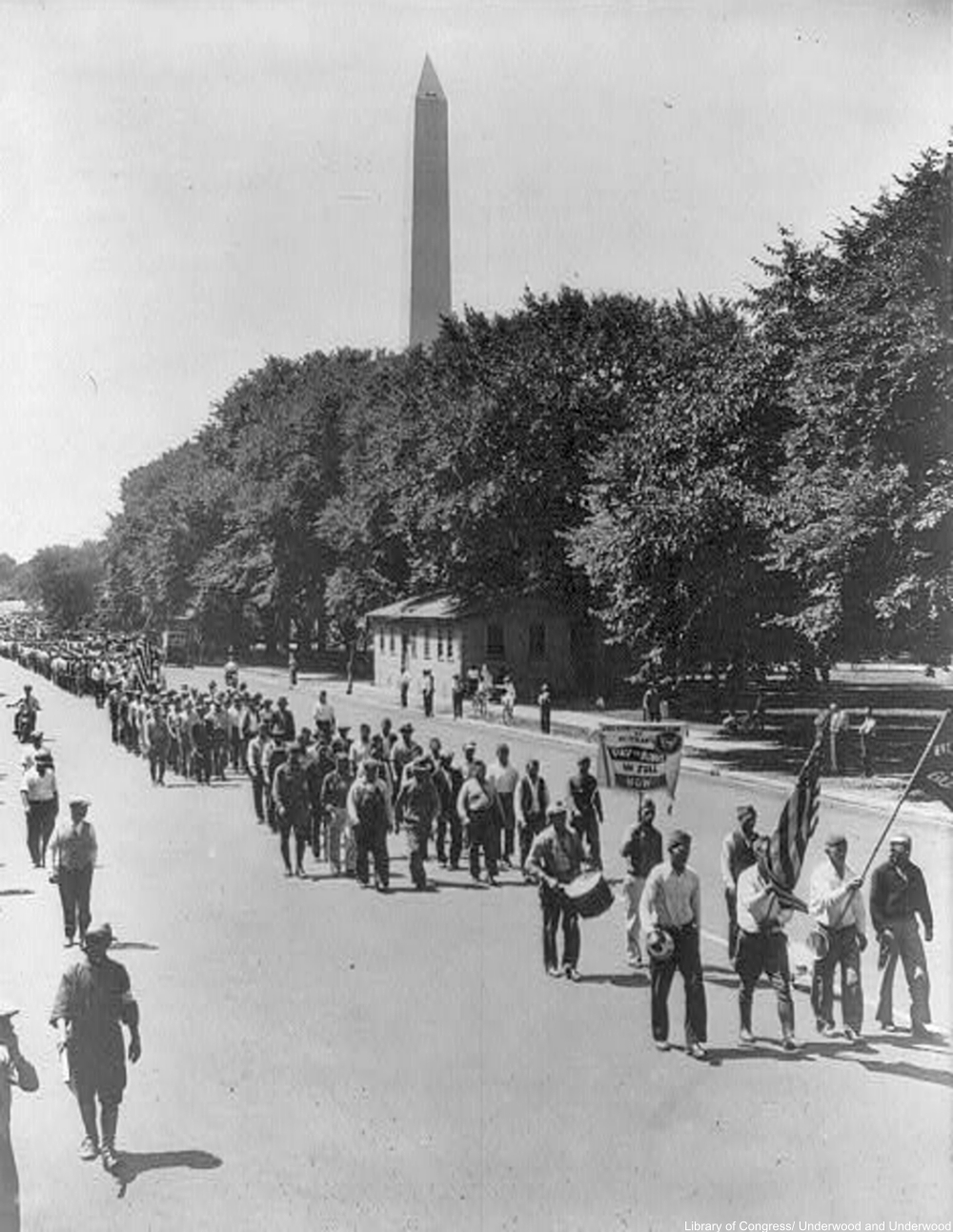 Bonus Army marching to the Capitol, July, 1932. Via/ Library of Congress 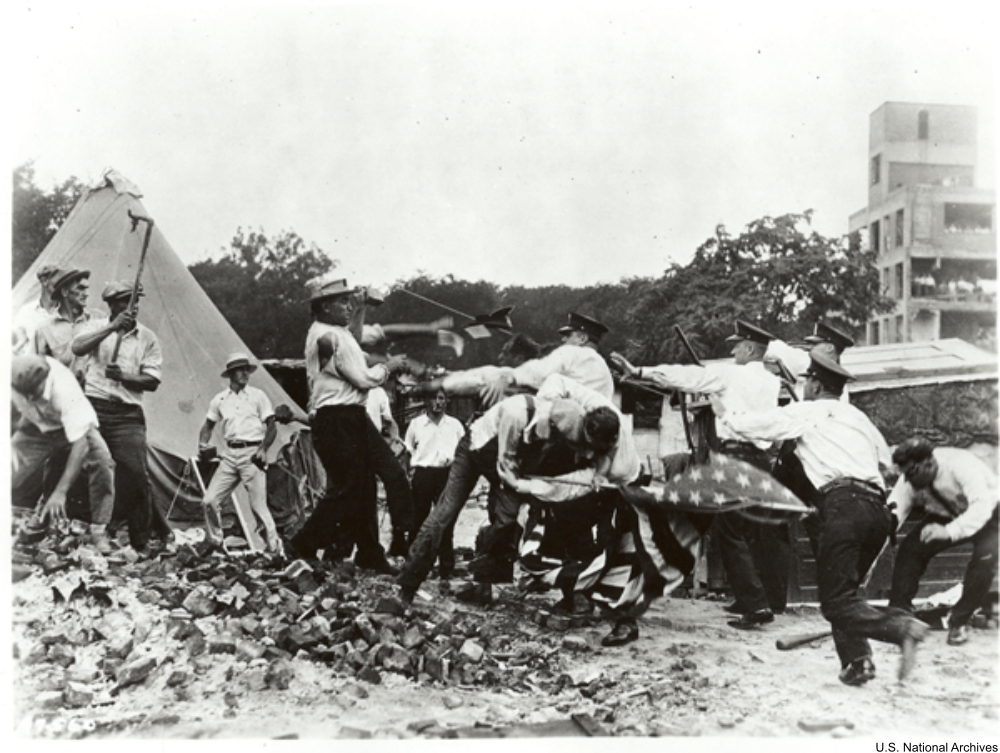 The Bonus Army clashes with police, 1932. Via/ National Archives

The group of army vets grew in number, all requesting to receive their bonuses during the hardest times they’d known. The press dubbed them the Bonus Army or sometimes the Bonus Expeditionary Army and newspaper headlines told of their ongoing struggles throughout 1932. The summer was particularly active for the marchers, with vets coming from New York City and Philadelphia to march. An estimated 20,000 veterans made for a formidable crowd. 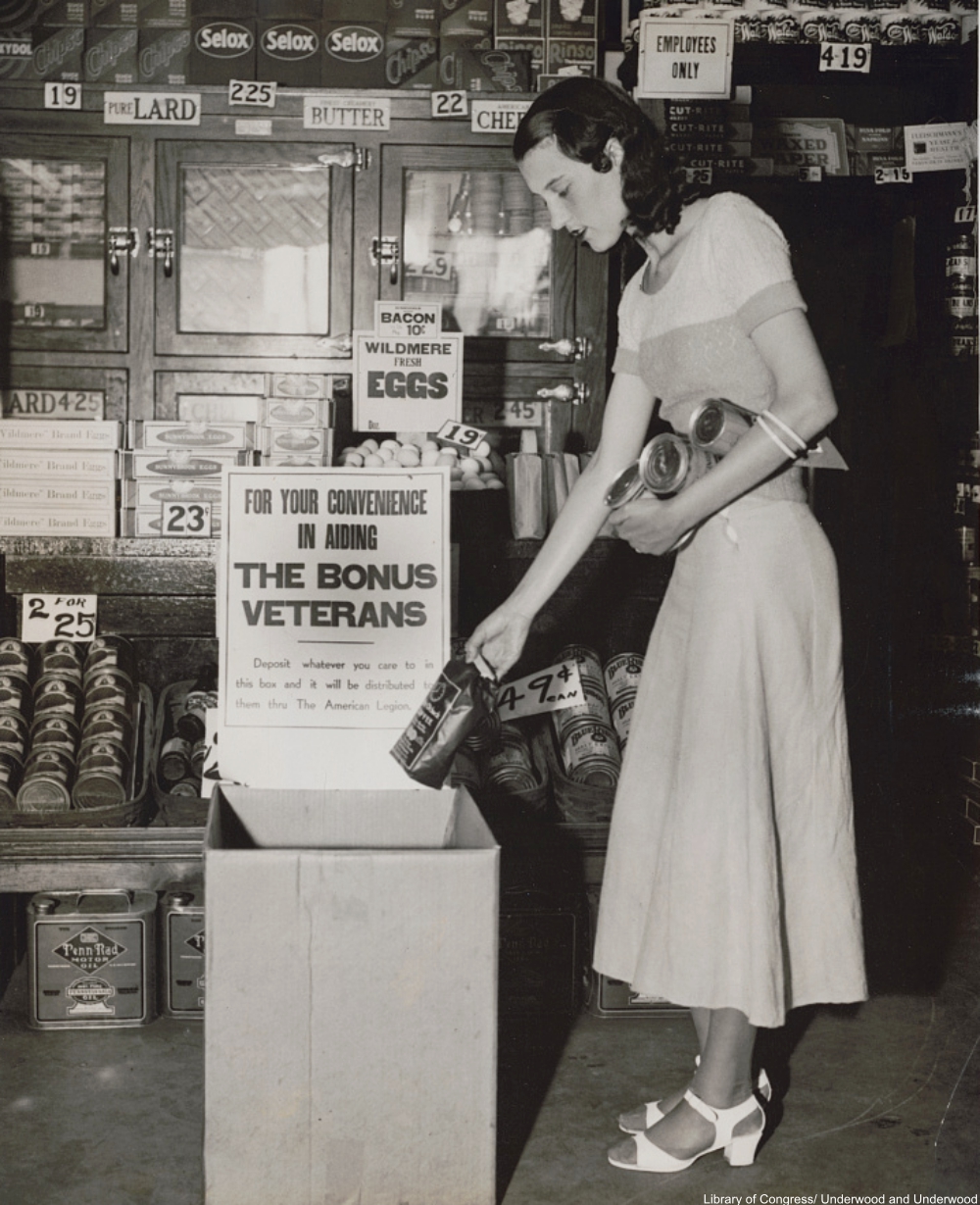 Food boxes placed in stores to receive contributions for Bonus Army, June, 1932. Via/ Library of Congress 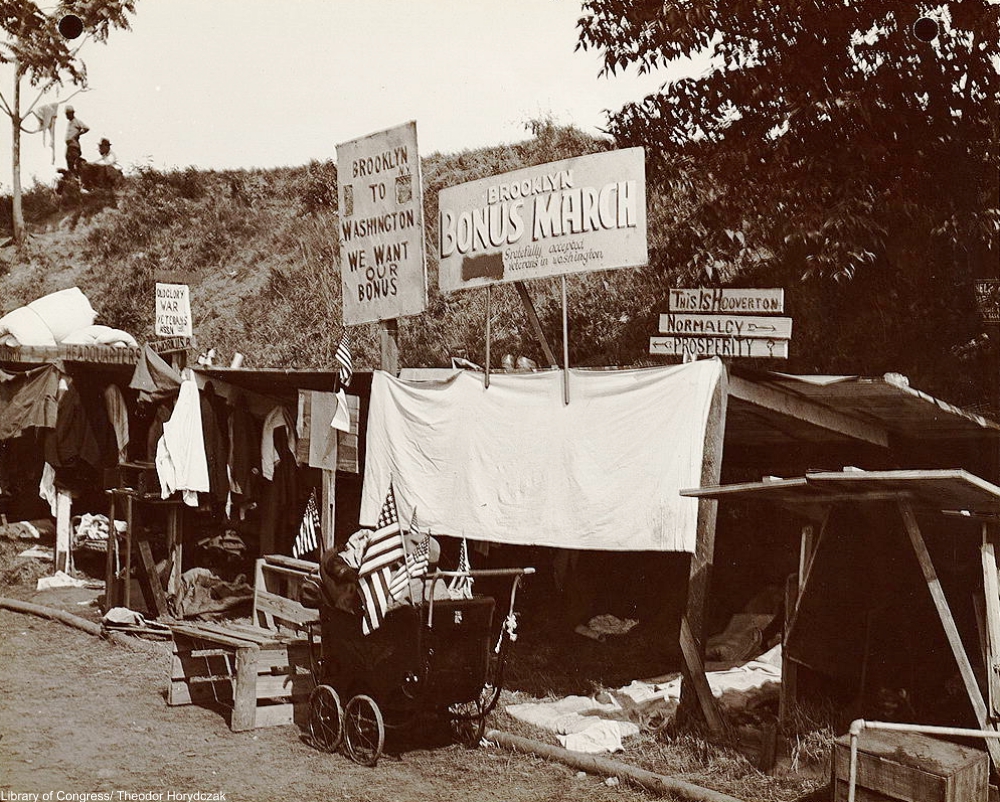 Encampment of shanties built by Brooklyn veterans in the Bonus Expeditionary Forces in Washington, D.C., 1932. Via/ Library of Congress

The Bonus Army went so far as to build their own Hooverville shantytown in Washington. The image above captures so much about the sentiment towards President Hoover, the Great Depression, and about being forced to live in a shantytown. The signs read “This is Hooverton” and point opposing directions for “Normalcy” and “Prosperity.” 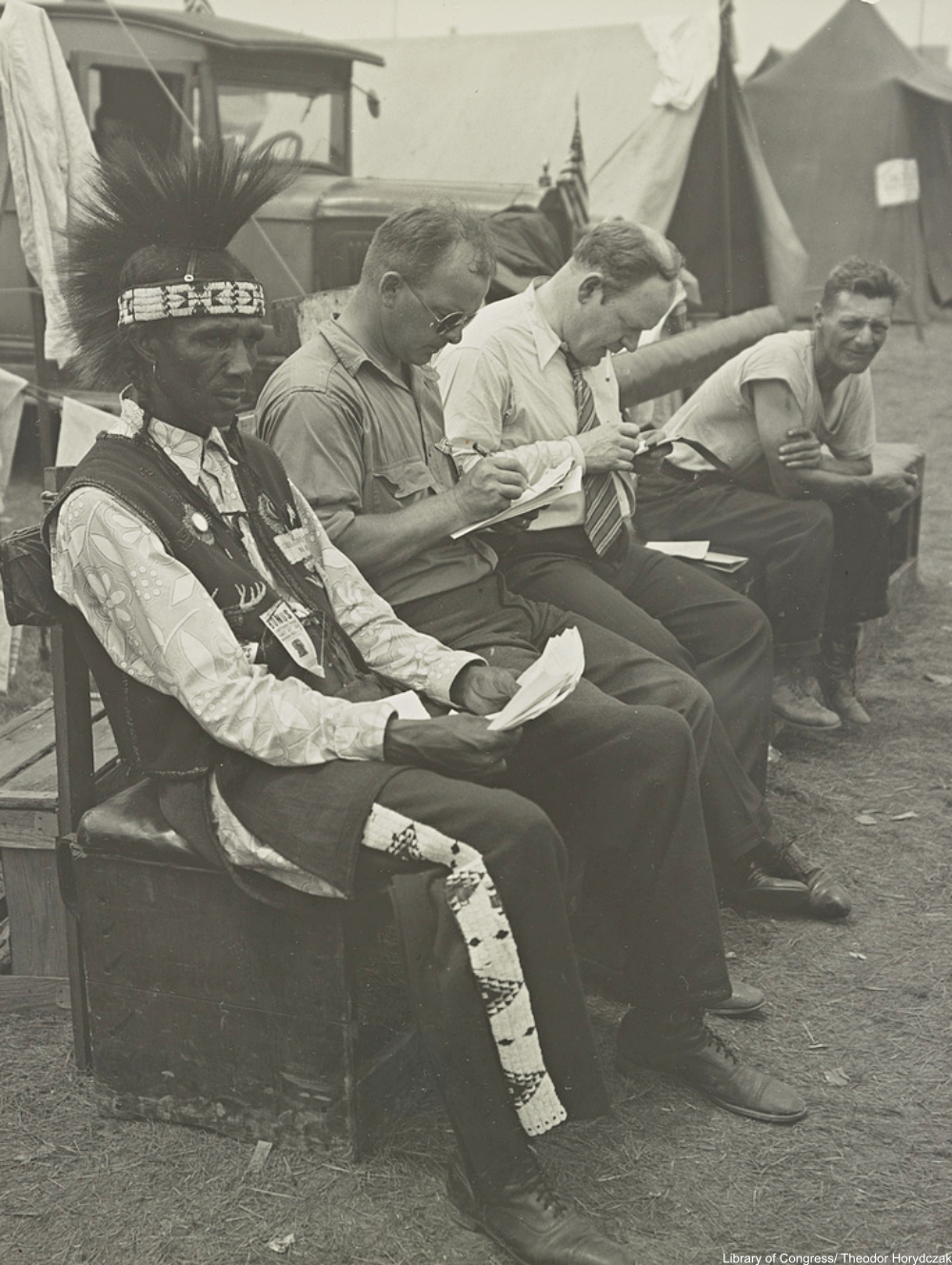 American Indian in traditional dress and three other vets pass the time in the shantytown. Washington, D.C., 1932. Via/ Library of Congress

President Hoover was unwilling to negotiate with the vets and several bills pushing up the payout date had failed to pass Congress. On July 28th, 1932, he ordered forcible removal of the marchers and their shacks by police. The marchers were turned away and their dwellings burned. 2 veterans were shot and later died of their injuries, a Lithuanian immigrant and vet named Hushka, and a vet from California named Carlson.

Public support was largely on the marcher’s side and the incident contributed to President Hoover’s already-growing unpopularity due to his “bootstrap” mentality when it came to the severe poverty most Americans were facing. 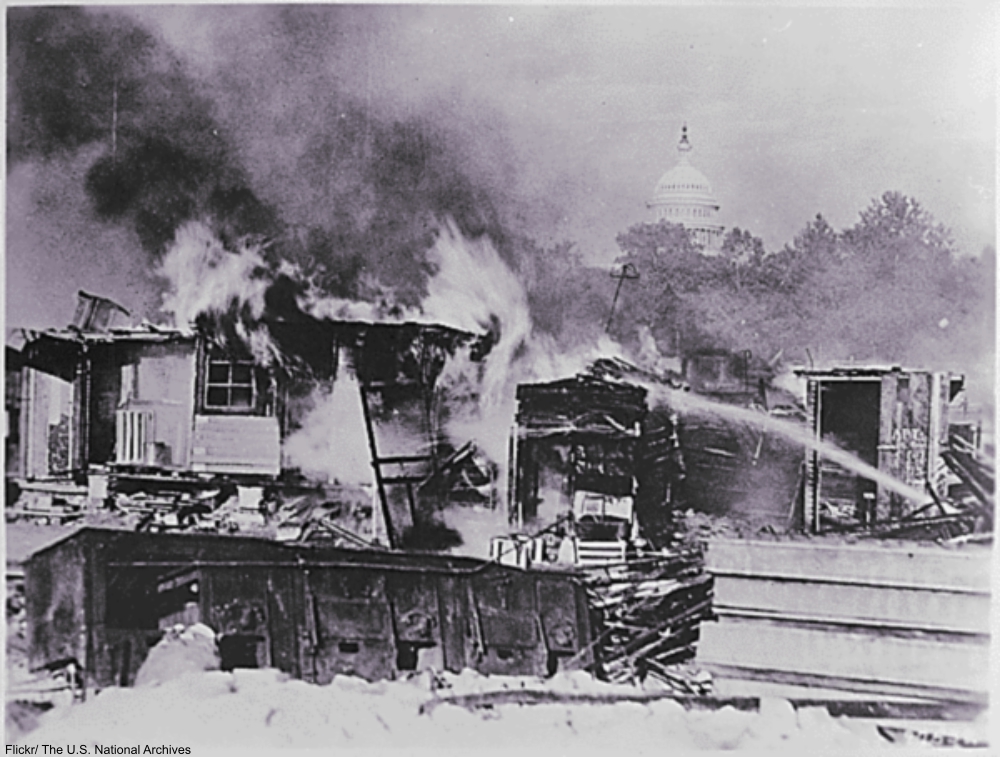 Shacks, put up by the Bonus Army on the Anacostia flats, Washington, DC, burning after the battle with the military, 1932. Via/ National Archives

The marchers were at it again in December of 1932, and again in 1934, and again in 1936. When they marched for benefits in 1934, President Franklin D. Roosevelt offered them jobs with the Civilian Conservation Corps, which many of them accepted. In 1936 the House and Senate both finally voted to pay out the $2 billion of bonuses 9 years early, ending years of strife for these struggling vets in an override of FDR’s veto of the measure.

Click here to read about the draft riots of 1863.