The importance of coins in our modern times has been decreasing for decades. We can remember a time when a nickel or a quarter actually had some buying power and as such, saving those coins was a big deal.

Arguably more fun than a ceramic piggy bank, cast iron mechanical banks are not only incredibly sturdy, but they have the added attraction of humorous motions which deliver the coins into the bank via levers and buttons. These quirky coin banks have seen a rise in valuation as they become rarer and harder to find. 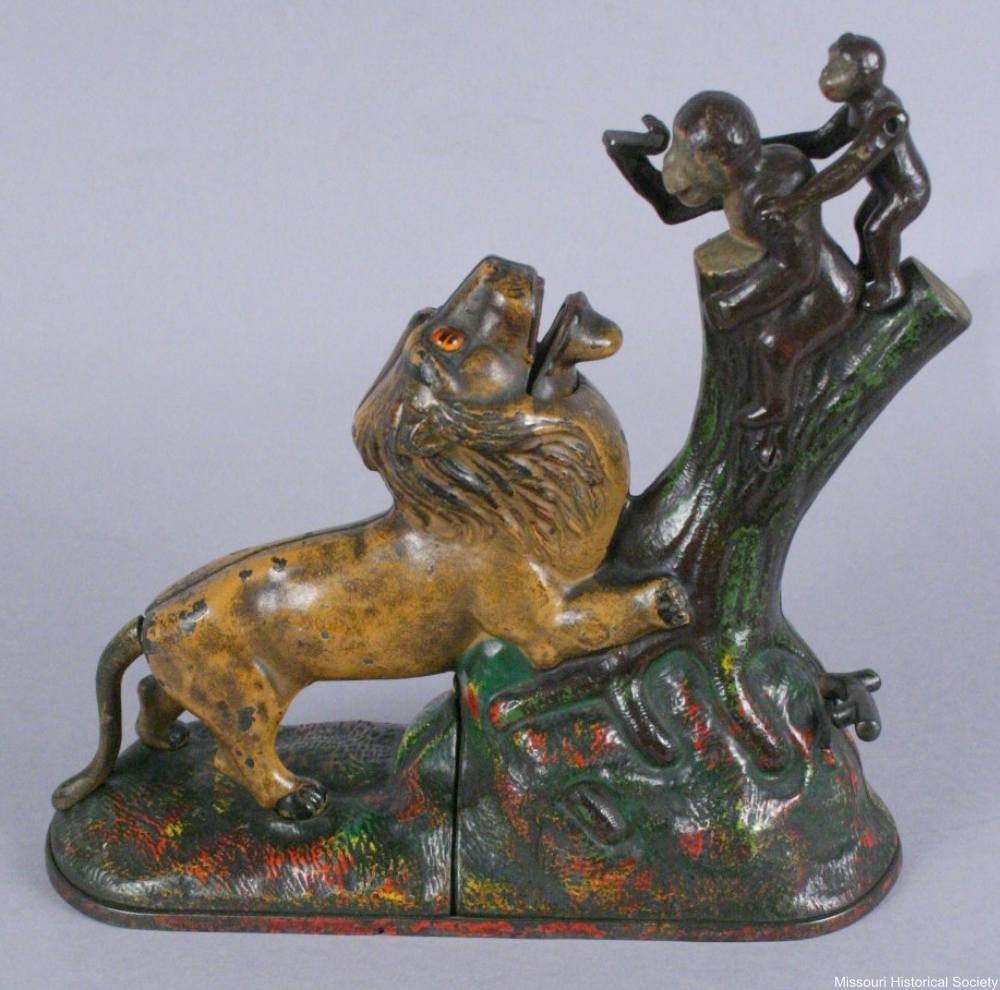 Lion and monkeys mechanical coin bank Manufactured by the Kyser and Rex company circa 1883. Via/ Missouri Historical Society

In the late 1800s increasing numbers of children’s toys were made from cast iron. Mechanical bank manufacturers created many delightful designs coated in bright paints. The scenes depicted a huge variety of events, from the famous trick dog bank to banks that fed coins into a head to banks that show hunting scenes. Popular figures included animals, historical celebrities, clowns, and buildings. 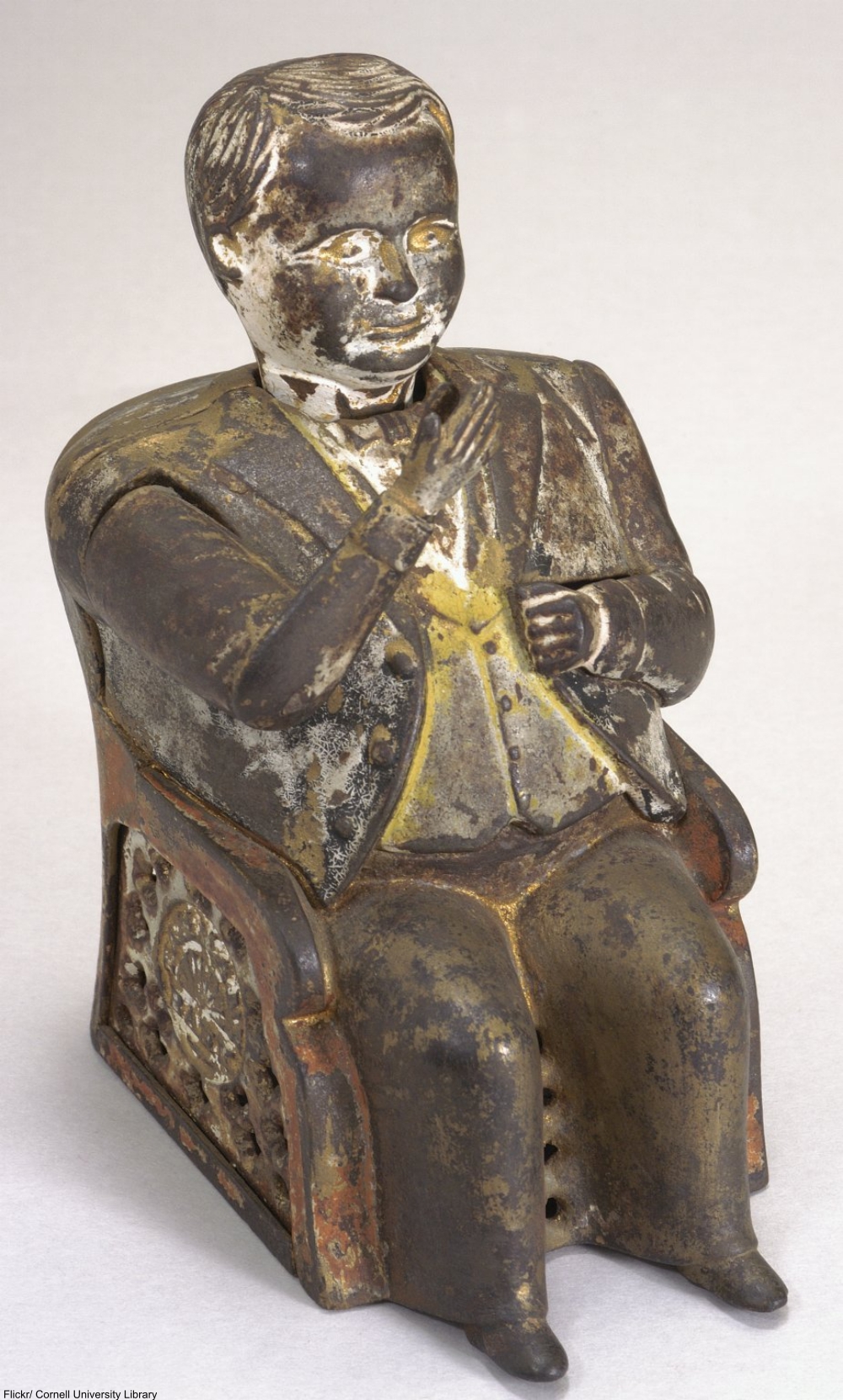 “Tammany Bank” mechanized cast iron bank from 1873 was a commentary on the Tammany Hall political organization. The figure takes a coin in his hand and covertly slides into the crook of his other arm. Via/ Flickr

While some banks were innocent and playful, many companies used racial stereotypes or political imagery in their banks. The inflammatory banks are often the most valuable in today’s market. 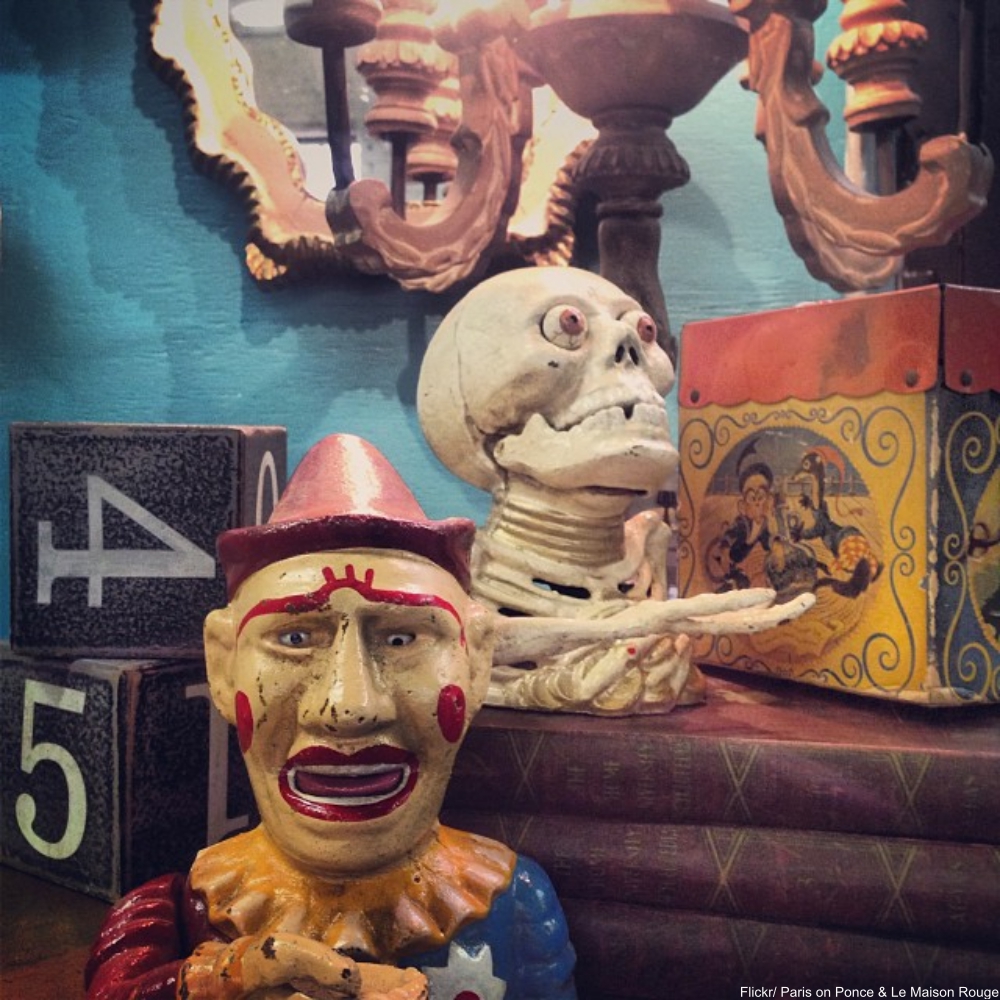 The Humpty Dumpty clown feeds a coin into its mouth, first manufactured in 1882. Via/ Flickr

Many manufacturers halted production of their cast iron toys and banks during World War II, as metal was badly needed for the war effort. Some never started back up once the war was over and so the era of the cast iron toy began a sudden decline after the 1930s.

While the prices can vary quite a bit for these weighty little banks, many can be found for $20-$100. A few select banks, like the antique William Tell shooting bank first manufactured in 1896, can sell for hundreds of dollars!

Iron banks are still being made, but they are far less common these days. One reason for a big range in price is that many historical designs were produced well into the 20th century. Take for instance the trick dog as seen below. Versions of this bank are still in production today!

So how do you tell if a bank is original or a reproduction? Older banks will have smoother metal and paint and may have hairline cracks in the iron due to age. If ever in doubt, a tracing of the base can be taken and compared with known measurements of authentic banks. Reproductions will vary by a fraction of an inch.

If you enjoyed this then click the “Next Page” button to find out which toy was the most popular the year you were born!