We at Dusty Old Thing would like to wish everyone a very joyous New Year’s Eve and a very good New Year coming up. Here are a few antiques that have recently been shared with us. We hope you enjoy them. 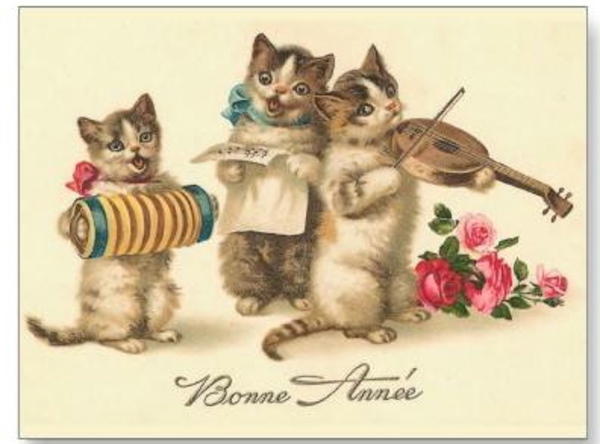 from The Fancy Flea. “Have a wonderful New Year, Dusty Old Thing!” And we’d like to wish Fancy Flea and everyone a very “Bonne Annee”, too!

As we all know the fanciful depiction of pets was at its height in the later half of the 19th century. We often say it is “Victorian”, but the same romantic and anthropomorphic tendency to show cats doing human, and generally fun, things was prevalent outside of Victorian England…as we can see in this French card. It, of course, continues to this day. It was probably due to several things. Cats for centuries in Europe had been killed for associations with witchcraft. Only when medical knowledge advanced to show how disease spread, especially via rats and mice, did cats suddenly become truly welcome in many areas.

In the 1870’s in England, photographer Harry Pointer created a photographic series called the “Brighton Cats” of live cats dressed up and doing amusing human-like activities. He started captioning them, LOLCAT style and they were immediate hits. One even included a “Happy New Year” of cats in a basket. At the same time, many children’s books were coming out featuring pets that had human traits and had all kinds of adventures. The tale of the “Three Little Kittens” probably has an oral tradition, but was published in England in 1833 with a popular illustrated versions from 1858 on.

Truly, in days gone by, the image of cats so radically changed that they were popularized into endearing fuzzballs like we see here. 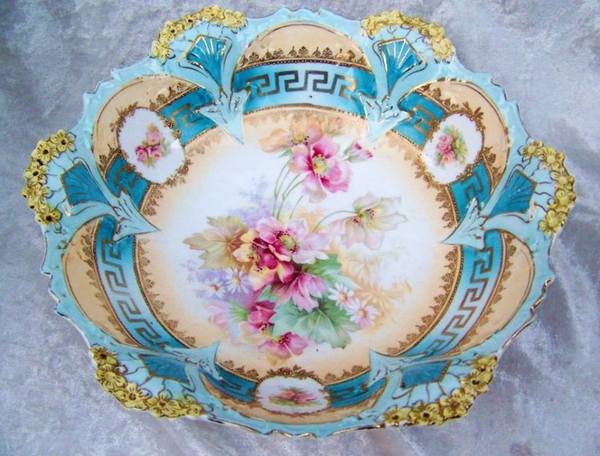 Jerry’s bowl is just exquisite. It’s one of the finest pieces of R.S. Prussia we’ve seen! It shows the high art and styling of the Reinhold Schlegelmilch Porcelain factory in Suhl, Germany. We’re guessing that it was made between 1900-1905 which was the time of the highest quality of R.S. Prussia. Fans of R.S. Prussia have many resources, online and in libraries, for research. There’s also a collectors society, the International Association of R.S. Prussia Collectors, Inc. 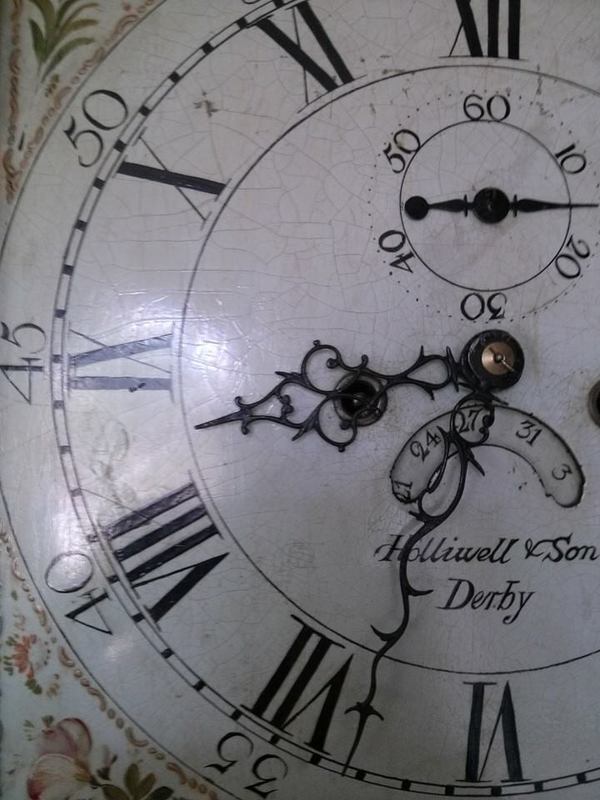 from Julian Rodriguez and Tallulah’s Antiques: “The face of our grandfather clock. Cool hand painted face and arms to tell the time. Wishing Dusty Old Things and fellow collectors a Joyous and safe New Year’s !”

William Holliwell of Derbyshire in England was, according to the research we’ve found, a noted watch and clock maker in the later part of the 18th century. He also operated as “Holliwell & Sons”, as seen on Julian’s clock face, and “Holliwell & Holliwell”. His clock works, in a case of the same time, are sometimes described of being of the George III period.

We’d like to thank Julian for sharing with us this closeup. It’s an appropriate way to end on New Year’s Eve.