A Day Recorded in Yellowing Papers

It’s November 21, the day before the 50th anniversary of the assassination of President Kennedy. For those of us who were alive then, we all remember ìwhere we wereî and what we felt. Weíd like, today, to say thank you to Melissa Davis for sharing the photo below of newspapers from Chillicothe and Columbus, Ohio, from those hard days. 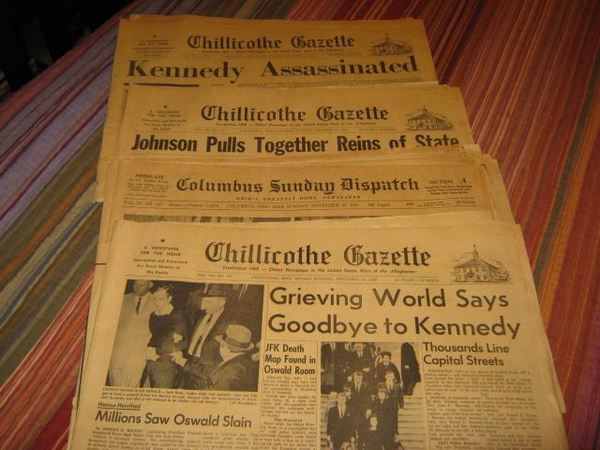 from: Melissa Davis: “One of the saddest days”

This is Nancy from Dusty Old Thing. I remember where I was and the whole memory still brings back tears. My family had been Kennedy supporters. They came from farming families who loved FDR. During WWII, both parents moved from the country to Dayton, Ohio, to work in defense fields, my mother at Wright-Patterson AFB. We loved science, airplanes, space. I was in 7th grade when Kennedy ran. We had all kinds of campaign buttons and collected all kinds of magazines that featured the Kennedy family. On Saturdays Iíd go with friends to the campaign HQ and help stuff envelopes. We were organized into a club for girls, wearing the traditional navy straight skirts, white blouses and white gloves. We had sashes of red, white and blue.

During the campaign he came to Dayton first for a meeting with community leaders at the Biltmore hotel and then for a speech at the Courthouse. It was a school day. We heard that our girlsí club would stand right by the door of the Biltmore. We skipped school. My parents agreed. Yes, I got to shake his hand and, yes, I still have the glove. And, yes, I got an ìFî for everything in school that day.

Later, during the Cuban Missile Crisis many of us in Dayton thought we wouldnít live very long. My Mom, at the Base, worked longer hours than usual. Family and friends discussed whether it was better to die in a blast that would inevitably come to Dayton or try to evacuate and die more slowly in the country. The adults decided to stay. We all lived. The sun came up. The Defcons returned to normal.

I was in Art Class on November 22, 1963, when the principal came on the intercom and said that the President had been shot. No one said anything except for one boy who said ìGoodî. Everyone ignored him. The buses came early and we all went home.

We, too, kept the newspapers for years. And the memorial issues of magazines and a book called ìThe Torch Has Passedî. But, somehow, over the years and through too many moves, they got lost. Now we just have a few of the campaign buttons and the memories.

Sometimes, when we look back, time stops for a second when we remember ìWhere we were.î We’ve since had other collective moments like that, including September 11, 2001.

Thank you, Melissa, for your post to Dusty Old Thing. Many of us remember.